The 20 Best Board Games for Adults

So, what's the plan for tonight? Another Netflix binge or mindlessly scrolling your Instagram feed? Hey, no judgment. But if your evening routine has grown a little stale lately (*raises hand*), try kicking things up a notch with our roundup of the best board games for adults. There’s something in here for everyone, from laugh-out-loud shenanigans that can be played in just ten minutes to seriously strategic brain busters that will keep you busy all night long. Here, 20 picks that are way more fun than watching Friends for the eighth time. 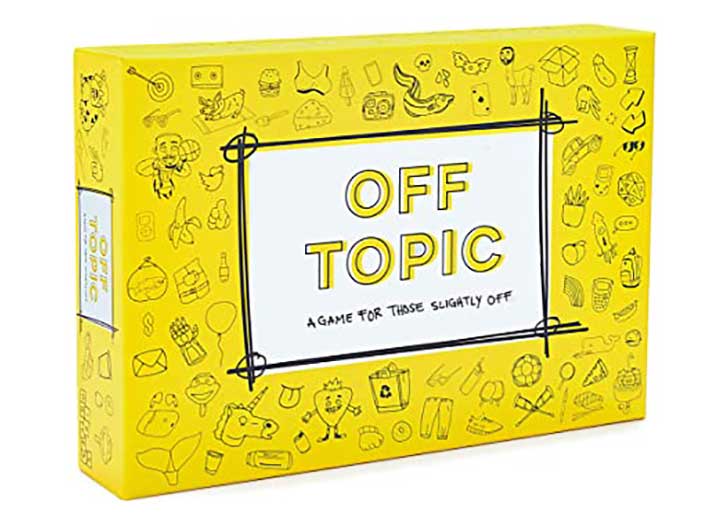 The quickest wit will win this game that combines uproarious grown-up topics with creative thinking. (It's basically Cards Against Humanity minus the multiple choice options.) Here's how it works: A card is drawn from the deck to get the conversation started (example: “thoughts during sex ed”) and then the die is rolled to determine which letter from the alphabet players must use to start their responses. They then write down as many wacky and unique things as possible on their personal whiteboard before comparing answers once the time is up. If a response is the same as someone else’s, or the group rejects it, then it doesn’t count. Whoever has the most acceptable answers at the end of the round gets a point. Tally up the points when the game is over to see who wins. 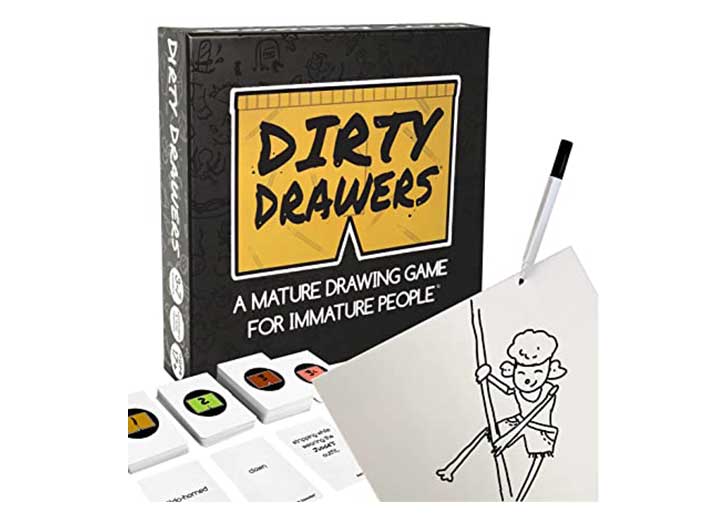 If you want a visual element added to your raunchy party game then this is the pick for you. Oh, drawing isn't your strong suit? Well, here’s the good news: If you aren’t a natural born artist, you’ll actually make the game better. Just pour yourself a big drink and prepare to lose your dignity. Players draw an original picture based on a combination of cards that provide a noun, adjective and verb. Artists are encouraged to get weird, and the best part comes when bad artists try to describe their masterpiece to the group. 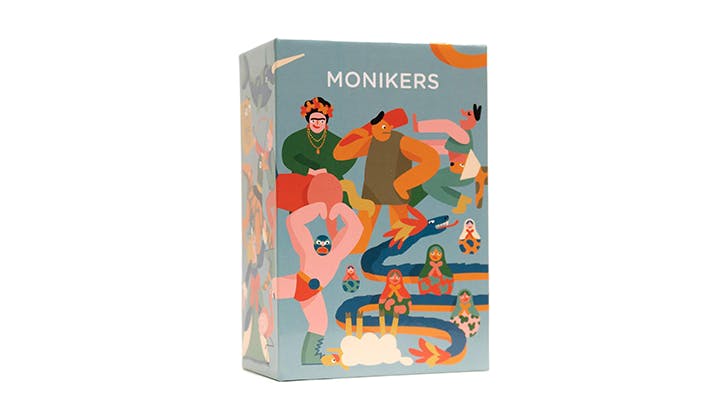 Based on the classic parlor game Celebrity, this fun game is particularly popular with pop-culture junkies. Players give clues to teammates to help them correctly guess what’s on the card, which could be anything from Beyoncé to a viral video. This one's super easy to learn and teach (it'll take your crew less than a minute to figure out the rules), and it can be played by up to 20 people, so no group is too big. 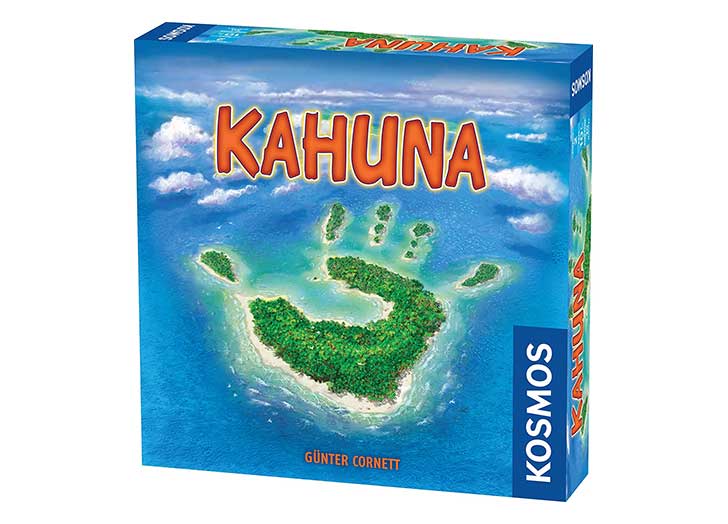 For when there's only two of you on game night, bust out this strategic board game where players race against each other to conquer a series of islands. And how do they do that, you ask? By building bridges between them. There are 12 islands in the archipelago and some careful planning will help you capture them all—but it's also luck of the draw depending on which cards are handed to you. 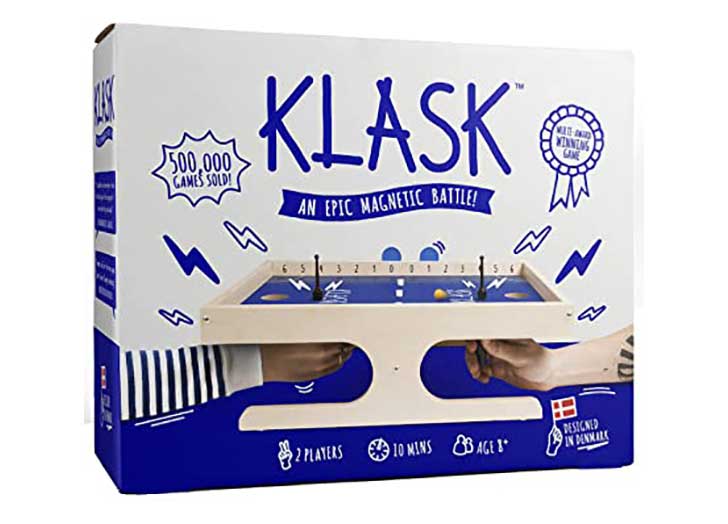 Clear those art books off your coffee table and enjoy this Danish-made game that’s essentially foosball meets air hockey—but not as hideous-looking. Magnetic handles and strikers help you defend your turf as you attempt to send the ball flying into your opponent’s goal, all on a wooden board. This is another great pick for when there's just two of you with the added bonus of each match only lasting about ten minutes. And don't worry, unlike your Scandi dining room table that took an entire afternoon to set up, this one comes fully-assembled so you can just unpack and let the games begin. 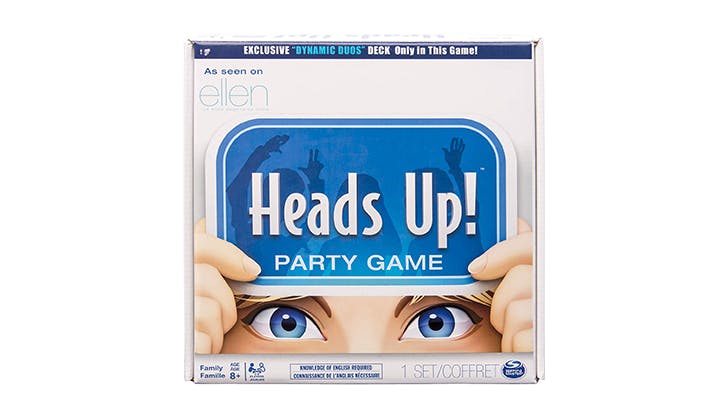 You love the app but we're fans of this board game version which gets everyone to step away from their phones and get into the competitive spirit. Featuring over 200 cards plus a sand-timer, the aim of the game is to figure out the name you're wearing on your headband, using just your partner's clues. A laugh-out-loud guessing game for two to six players. 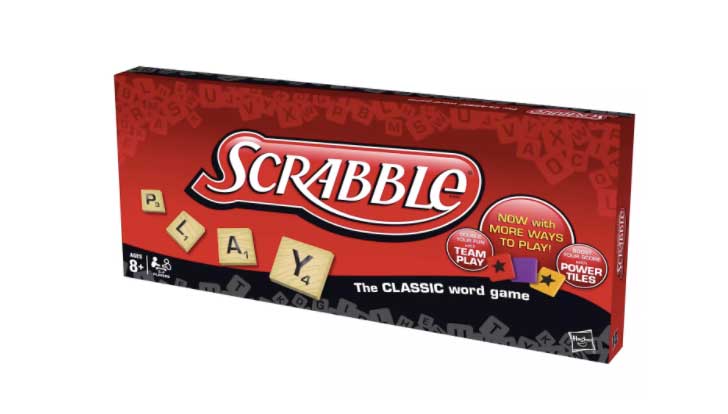 Hey, it's a classic for a reason. This popular board game will keep you busy for hours as you compete to create the best high-scoring words. Two to four players take turns building crossword-style words on the board, with long words, those using difficult letters or ones landing on special spaces giving players the most points. Just make sure you bring out the dictionary along with this game—someone is guaranteed to insist that "irregardless" is a word. 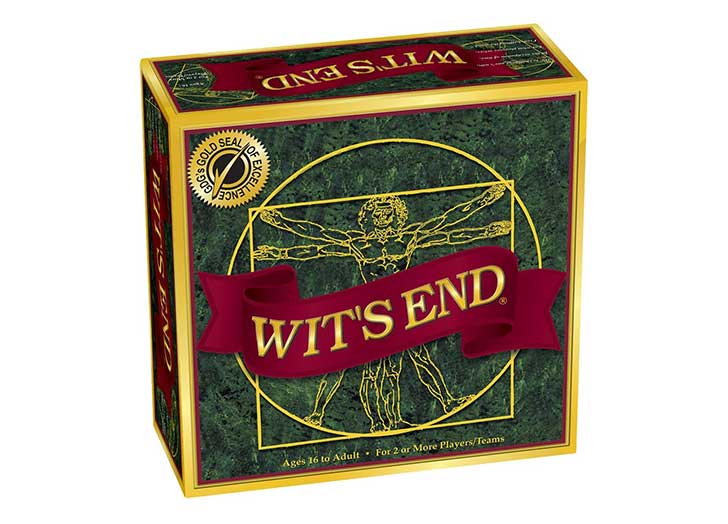 Seize this opportunity to see the know-it-all in your life squirm. This trivia game will put anyone’s general knowledge to the test—and the game board serves as a helpful visual reminder of your advancement...or lack thereof. Your playing piece can only move ahead if you come up with the correct answer to some tough questions and teasers (like "It's found in every word, two for brainy yet one for nerd"). Partner up to preserve your pride. (Oh, and the answer to that one is syllable, by the way.) 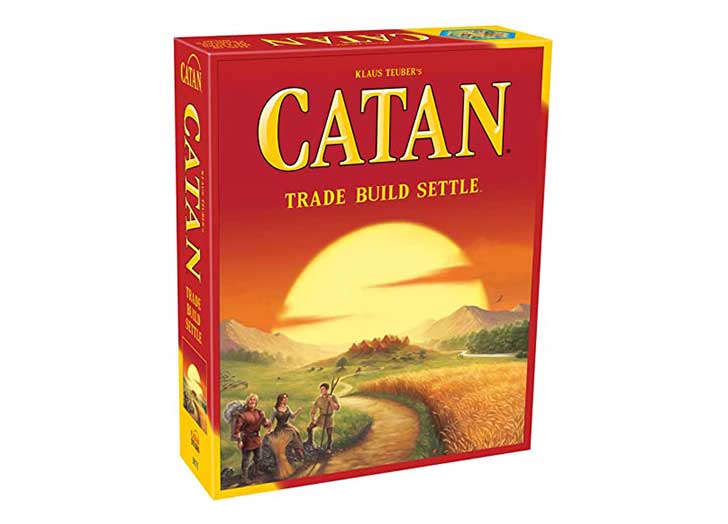 This one’s for anyone who remembers the tragic Oregon Trail game and wants a rematch. (Serious question: How come everyone always died of dysentery?) This fan favorite challenges players with the feat of building a whole new civilization by trading and protecting resources. Put on your thinking cap, though—strategy is a must-have here and the competition can be diabolical. 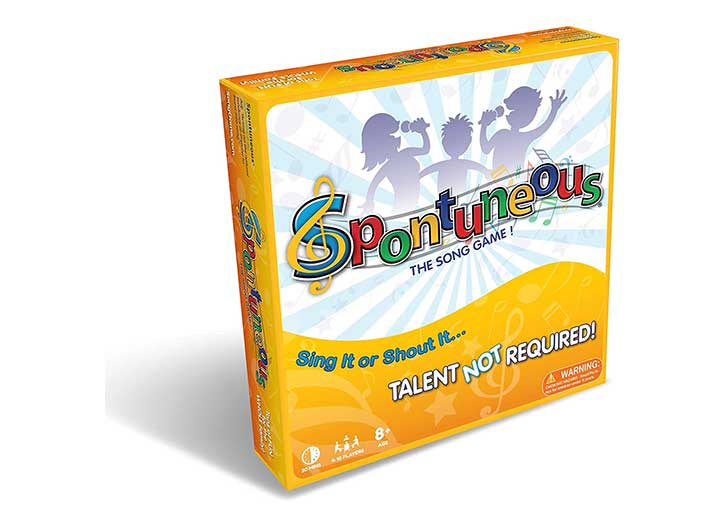 Bring your pipes to this game because it's all about the a capella. To get the game going, players write down five words and toss them out to other players one at a time. The first to belt out a song using the keyword gets to advance their playing piece. But beware, your winning repertoire might get you into more trouble; certain spaces on the board bring additional challenges drawn from the deck (like "sing five seconds from any country song"). But if your form of wit follows a there’s-a-song-for-that formula, then there’s no shame in your game. Just think of Spontuneous as a much more fun karaoke night. How so? Because the drinks are free, it's never too loud and nobody has to sit through the entire length of Don McLean's ﻿American Pie﻿. 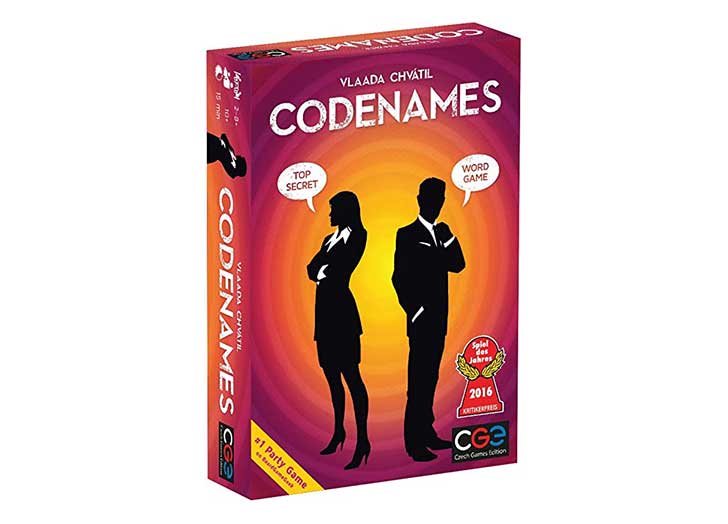 A clever competition that involves word play and relies upon powers of deduction for the win. Codenames’ spy theme is basically just a novelty feature, not central to play, but the game itself offers plenty of intrigue. Players exchange single-word clues to uncover the identity of secret agents, whilst avoiding the assassin. If you’ve got a nuanced vocabulary and a strategic mind, you’ll go far. 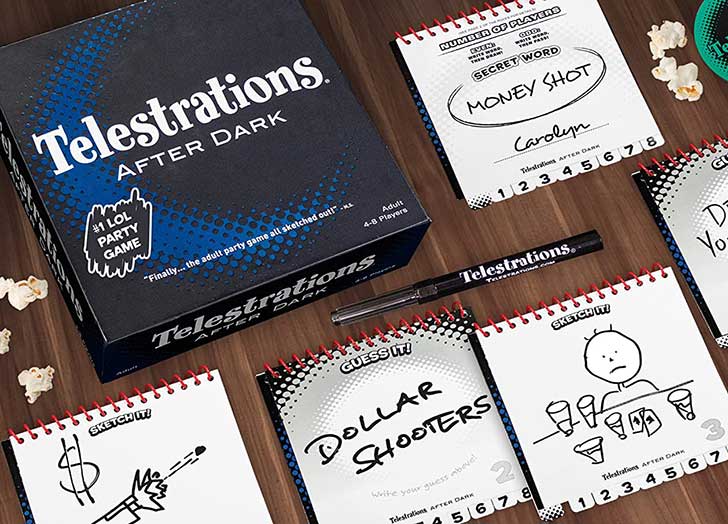 Like a game of telephone, there’s no telling how this one will go—and miscommunication is the name of the game. This version of Telestrations is a party night favorite that’s only as “adult” as you want it to be. Here's how it works: Each player has their own wipe-off sketchbook and a secret word that they have to draw. Once they’ve done their best doodle, they pass their sketchbook along to get the next person’s pictorial guess, and so forth until the image has made it all the way around. Then it's time to see just how wrong and weird things have gone along the way. The drawing component allows you to get all creative, while providing your friends with extra laughs. Bonus? Each round only takes 15 minutes. 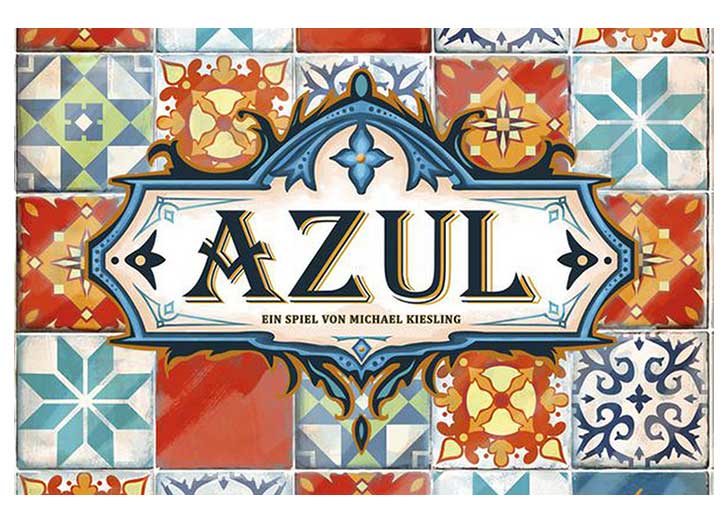 Azul is an award-winning game made for those who appreciate aesthetics. The objective: to create your own Alhambra-esque mosaic. Inspired by Moorish art, the process of building your own wall with the beautiful, vibrant tiles is oddly therapeutic. It's a game of strategy that moves fast, but not so much so that you can’t feast your eyes on your own abstract designs. 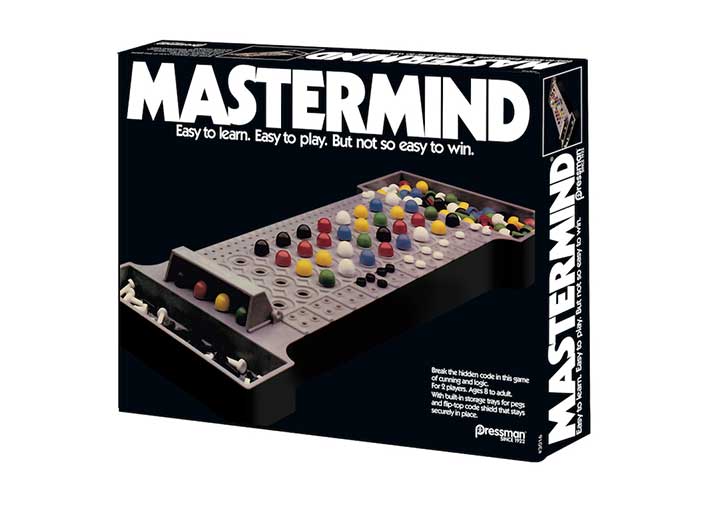 A beloved favorite for decades, this throwback gets your brain going with a deceptively simple decoding challenge that’s actually very difficult to win. To play, use the pegs to make a secret color code that your partner must crack in ten guesses or less. This quiet game of deduction might not be a staple at parties, but it's ideal for a grown-up game night for two. 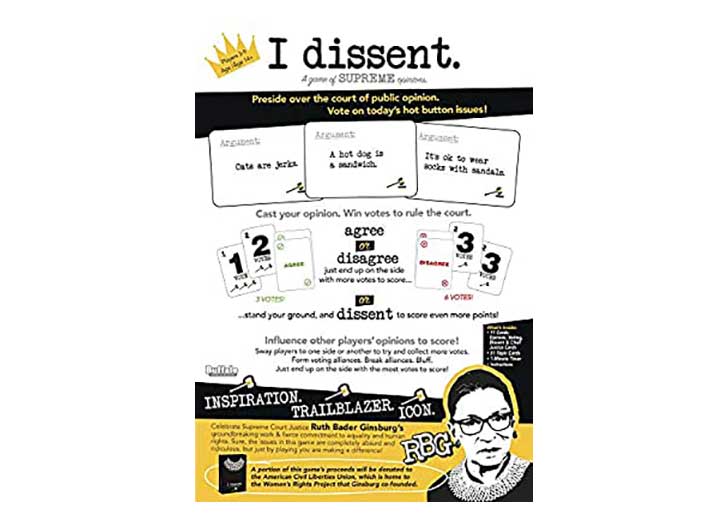 Nothing gets the party going quite like a lively debate. And this discourse-based game named after the great Ruth Bader Ginsburg is especially fun. Gather a group and get ready to argue over pressing issues, like whether or not cats are jerks and hotdogs are sandwiches—things might get heated, but the topics are pretty safe, so you’re unlikely to lose any friends after a round. Put forth an argument and use your powers of persuasion to bring players to your side, winning points with every “Yea” vote. (Disgruntled minority voters can throw the system for a loop by playing a dissent card and trying to take down the majority.) 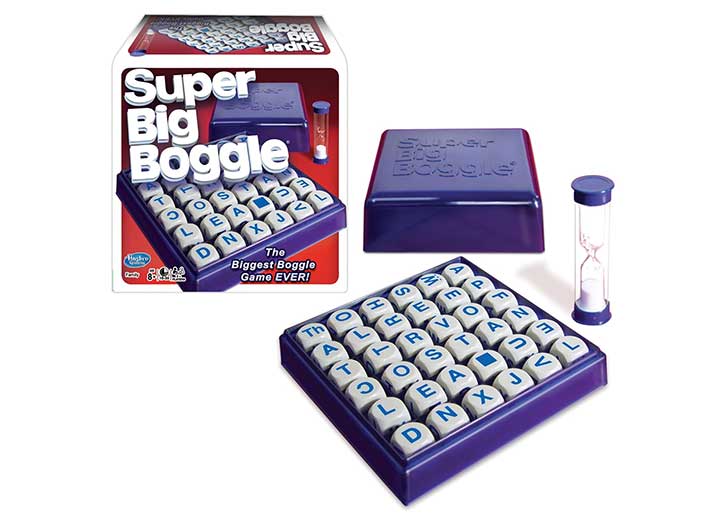 Love the idea of Scrabble but not the pace? Here’s a better game for less patient wordsmiths: Boggle. This classic pick gets your mind moving fast as players scramble to jot down as many words as they can find on the board. (And don't worry about your slow-as-molasses spouse—they'll have no choice but to pick up the pace thanks to the timer.) Shake up the board after every round and the alphabet dice will be flipped and rearranged into a new formation...so you can cream the competition again. 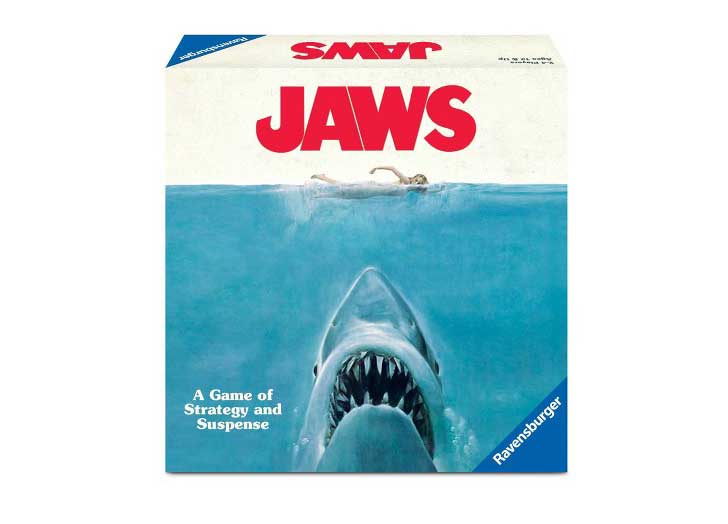 First things first: Will you be Brody, Hooper, Quint or a blood-thirsty Great White Shark? Once that’s settled, get ready to play your way through the classic film Jaws with this gripping game of strategy and suspense. Fortunately, this fight for your life is actually fun; the tension is palpable, the entertainment endless. Just don’t blame us if you have the theme song stuck in your head for the rest of the night. 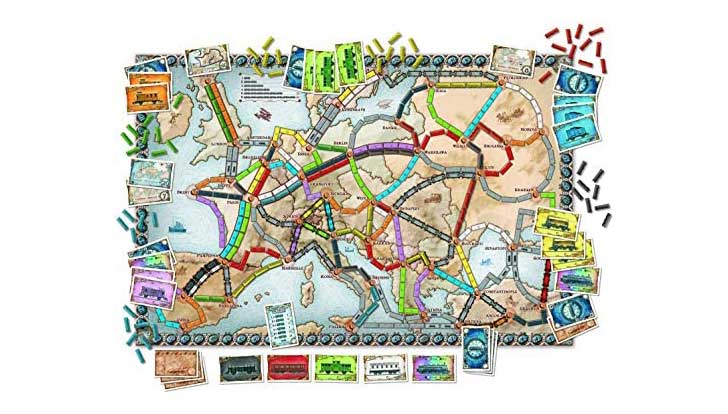 18. ticket To Ride Europe Board Game

"From the craggy hillsides of Edinburgh to the sunlit docks of Constantinople, from the dusty alleys of Pamplona to a windswept station in Berlin, Ticket to Ride Europe takes you on an exciting train adventure through the great cities of turn-of-the-century Europe," says the manufacturer. And with a description like that, who can resist? Players travel across the continent and score points along the way by claiming routes between two cities, completing destination tickets and seizing the longest continuous path of routes across the map. (It sounds complicated but the game can be learned in just three minutes.) The board game is for two to five players, although use it with the Alexa skill and you can even play solo against the virtual assistant. 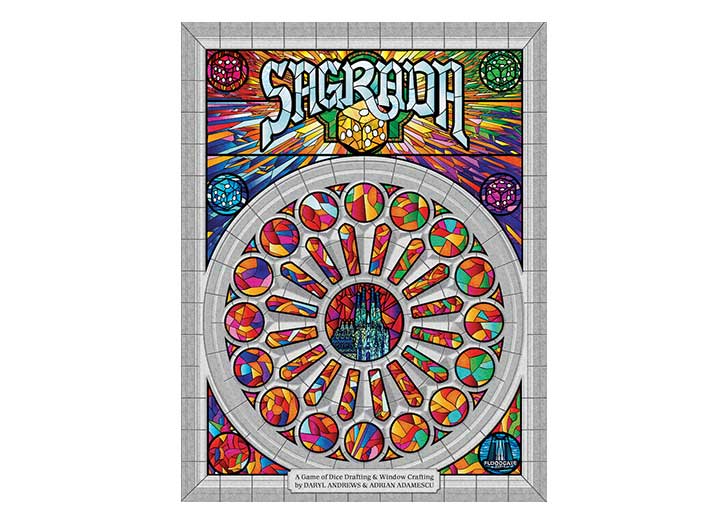 Another great option for skilled artisans and strategists alike. The objective of Sagrada is to construct a stained-glass window—the drafting dice determine which piece of glass you can use to complete your showpiece, but the decision of where to place each piece is up to you and your smarts. Color and shade requirements add to the difficulty of the task, as do the whims of your master. (Remember, your skills were commissioned by the Familia Segrada, so adaptability to their desires is key if you want to score points.) This creative board game will get those creative juices flowing while keeping you on your toes. 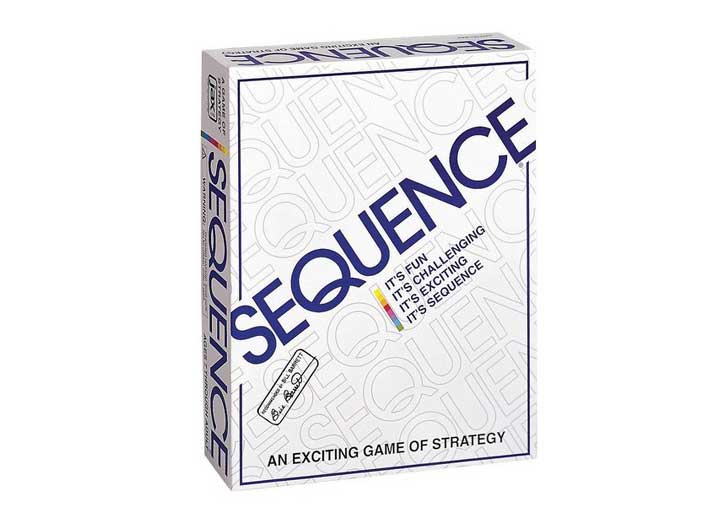 This popular board game requires teamwork, strategy and careful thought. Best of all, the gameplay only takes about half an hour from start to finish, so you don’t have to settle in for a serious time commitment. Jax Sequence combines classic card games, checkers and bingo for a fast-paced competition that’s far from boring. If you play your hand right (and foil your opponent’s plans as often as possible), you can be the first to line up five chips and claim victory.

The 16 Best Party Games for Adults

5 Mistakes You're Probably Making with the Family Holiday Card, According to a Professional Photographer