If you’ve never experienced Mardi Gras first-hand, a giant bar crawl on Bourbon Street involving college kids imbibing to excess and inexplicably baring all for some plastic beads may come to mind. But this is a major misconception, friends.

In fact, the Mardi Gras festival predates the idea of spring break-style partying by several centuries, and any New Orleanian will tell you that the jamboree that centers around Fat Tuesday is actually a family-friendly affair. So, what exactly is Mardi Gras a celebration of? Read on for the short version of this festival’s rich history and a round-up of the major Mardi Gras traditions, so you can party with the best of ‘em in Nawlins.

WHAT IS MARDI GRAS?

Basically, it’s a get-your-rocks-off extravaganza that occurs in anticipation of a big dry spell (i.e., the Christian holiday known as Lent). After all, we know the Lord giveth and taketh away, so why shouldn’t He giveth us the occasion to eat and party before we temporarily bid adieu to a few of our favorite things? It’s hard to name the founder of this tradition because it’s so old, it can be traced back to pagan rituals from thousands of years ago.

That said, according to History.com, the United States can largely thank one man in particular for all the hoopla: Pierre Le Moyne d’Iberville, a French explorer who anchored at a port not far from New Orleans on the eve of this ancient holiday and held a small celebration to honor both his landfall and Fat Tuesday. (Serendipity!) From there, things really took off and all kinds of permutations took place, but the bottom line is this: Mardi Gras is an occasion to feast and make merry before a period of penance, and it is celebrated by Christians around the world.

Now that you’ve got a little background under your belt, here are some Mardi Gras traditions that will help you better understand the excitement and eccentricities of the event.

6 Hanukkah Traditions to Celebrate the Festival of Lights 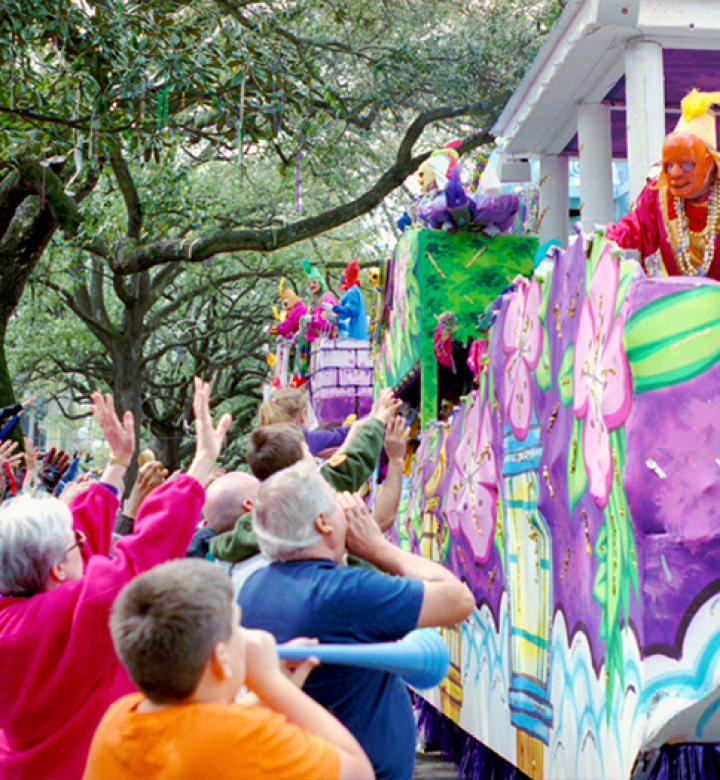 Parades. So many parades...and they begin well before Fat Tuesday. In fact, they span an entire season, beginning on January 6th and continuing until Mardi Gras arrives—a period known as Carnival. Mardi Gras and Carnival parades are organized by Mardi Gras Krewes (more on that below) and typically feature stunning, larger-than-life papier mache floats, often hand-crafted by community artists, that fit the aesthetic of the celebration. 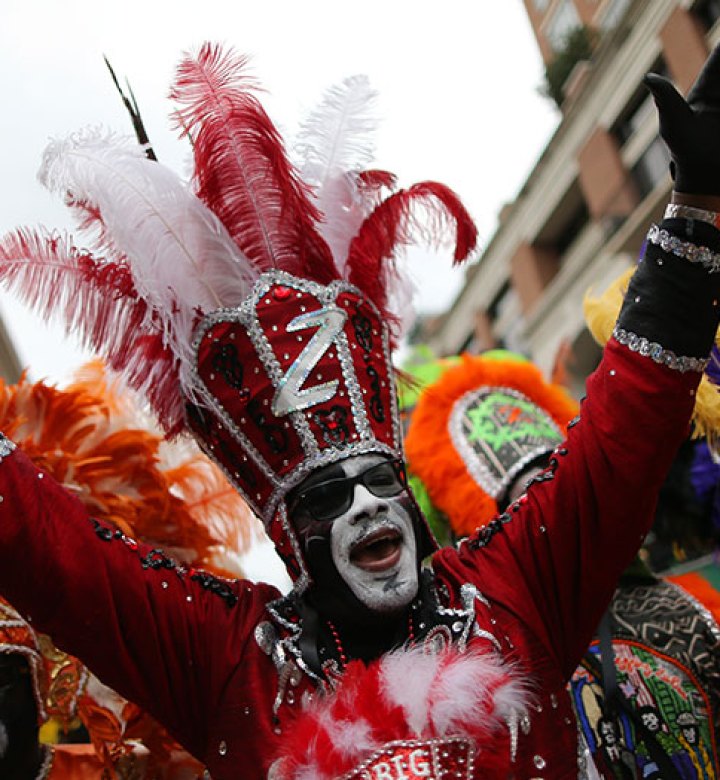 This may come as a surprise, but back in the 1850s, Mardi Gras parades were way rowdier than they are now. They were so unruly and chaotic that the governor and the press motioned to ban them. Thank goodness for a social club called the Mystick Krewe of Comus, which swooped in and cleaned up the holiday, starting many of the traditions we know today and encouraging the formation of other Krewes who carry on the legacy nowadays. Organized Krewes like Zulu (pictured above), Bacchus and Endymion are responsible for putting together the remarkable parades and balls of Mardi Gras, and many of the longest-running Krewes have contributed their own unique traditions to the festival. 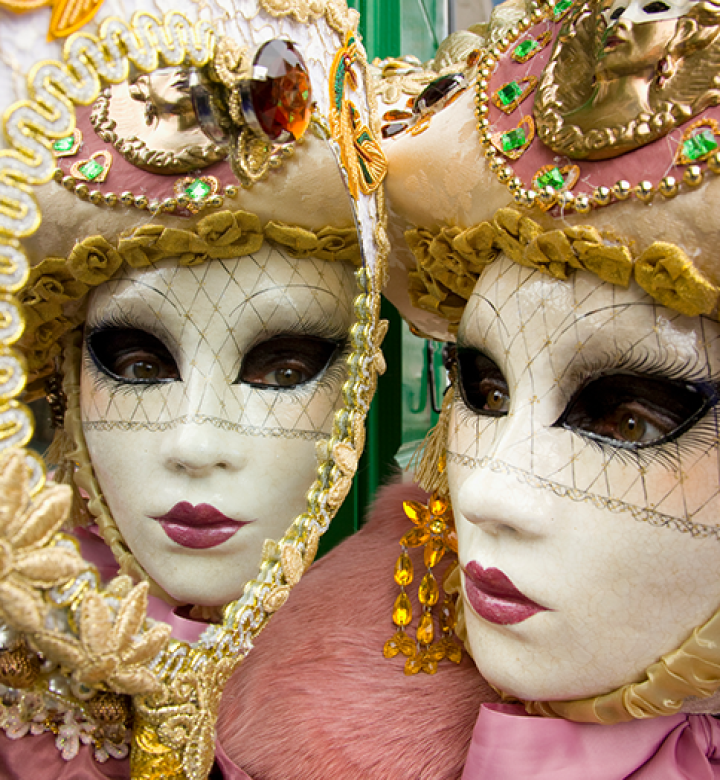 Wearing a mask at a Mardi Gras parade may seem like a frivolous thing people do, but it is serious business. Sure, if you’re an attendee just having a blast in the street you have the option to go without one, but when you’re riding on a float you’re legally required to wear one. That’s right, it is against the law in New Orleans to show your face on a Mardi Gras parade float. This practice dates back to the beginnings of the festival—a time when masquerades were the only way for people of different classes to let loose and commingle comfortably. That said, the artistry that goes into many of the masks you see at Mardi Gras is reason enough to keep the tradition—and mystery—alive. 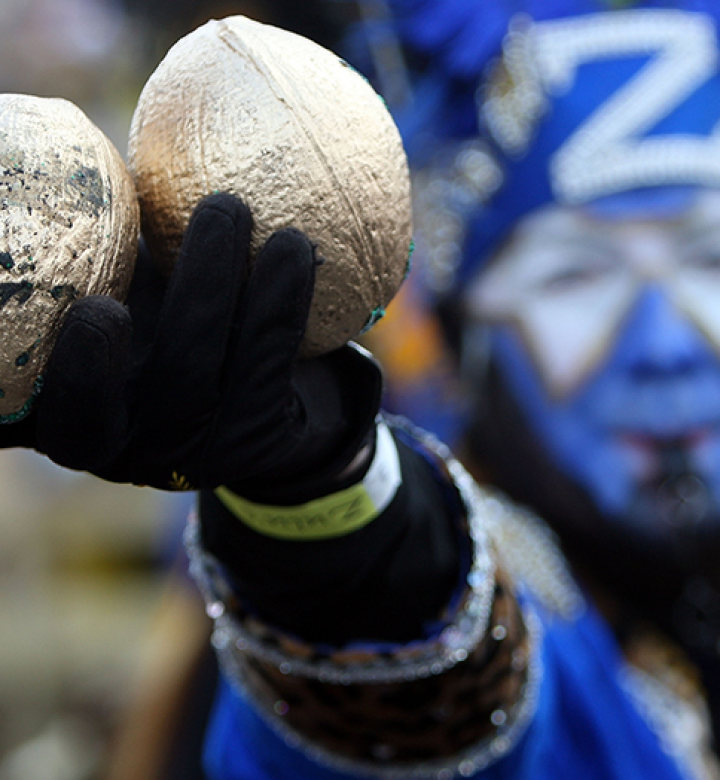 This cool, albeit risky, tradition was started by members of Zulu, New Orleans’s biggest predominantly Black Krewe. According to History.com, the Zulus held their first parade in 1909 and in 1910 began the tradition of throwing coconuts to the crowd. Inevitably, the coconut toss didn’t last too long, since it was deemed too dangerous to the public. So, the famed Krewe pivoted and are now handing the coveted—and of course, highly embellished—fruit to paraders. If you score one of these (thankfully not airborne) fruits at Mardi Gras, it’s considered a very special prize. 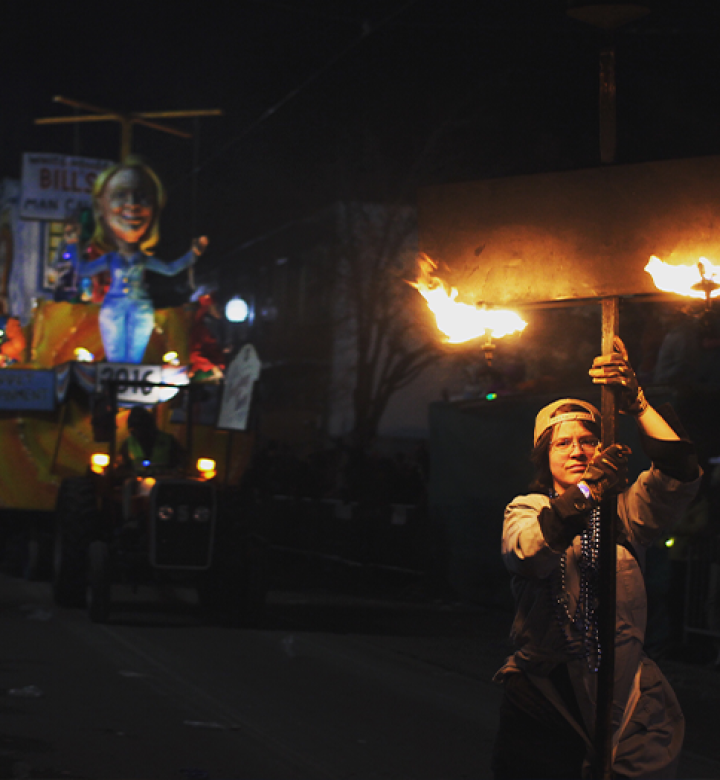 In case you missed it, Mardi Gras celebrations in the United States have been around for more than two centuries. As such, the flambeaux tradition was once a sheerly practical thing—because there was no streetlighting in the 19th century, enslaved Creole and Black people would carry the torches to help the rich see the parade at night. Parade-goers would then toss coins to the flambeaux carriers. These days, the flame is still going strong, primarily because of the cultural history it represents. Flambeaux carrying has turned more into a performance art, with carriers twirling and dancing in extravagant robes during the parade. 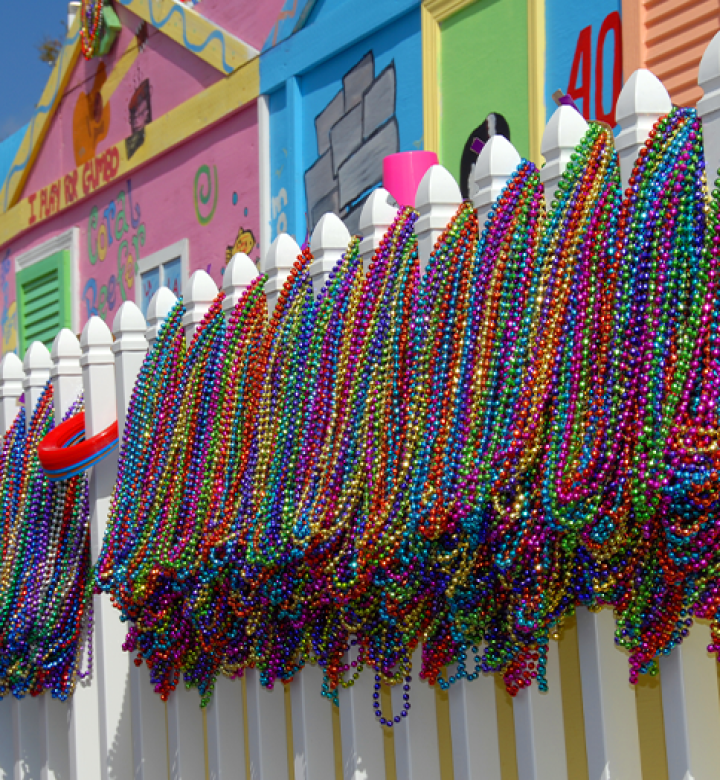 All kinds of things are thrown from the floats at Mardi Gras, but the beads are a biggie. So, who started the tradition of throwing glass beads at a captivated crowd? You guessed it, another major Krewe is behind this one: The Twelfth Night Revelers, a group who kicked off the tradition in 1870. All the other Krewes caught on pretty quickly, and various ‘throws’ became a hallmark of the festival. Fortunately, glass beads have been replaced with the safer, plastic sort—but you can still expect to walk away from Mardi Gras with a bag of goodies, including the famous beads, doubloons and an assortment of handmade tchotchkes. Heads up! 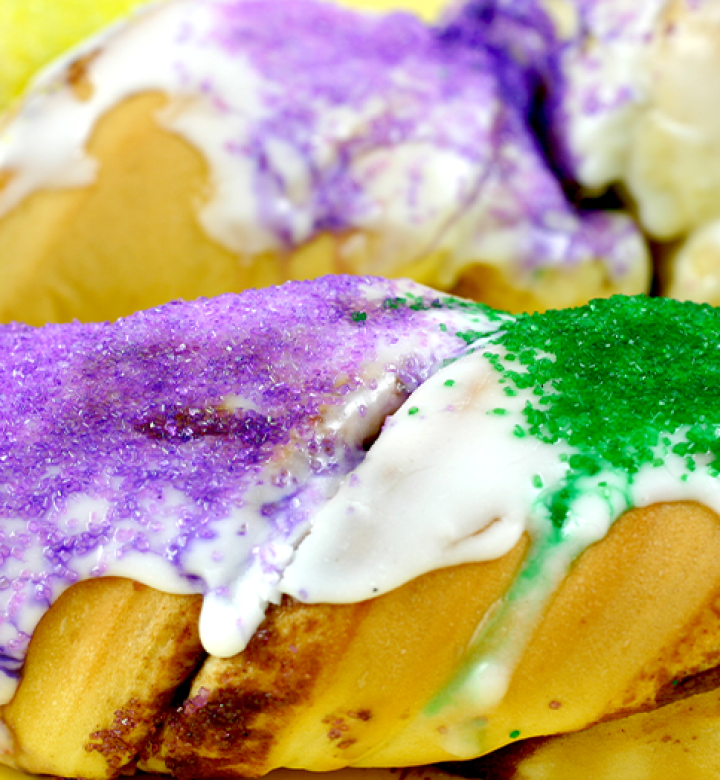 This Mardi Gras tradition has a storied history. The gist: When people began the tradition of giving gifts to children in commemoration of Christmas in the Middle Ages, they also began serving a special dessert—the king cake—in honor of the Three Kings who brought gifts to baby Jesus. Fast forward to the 1940s and bakeries in New Orleans began inserting a tiny baby figurine—made of plastic, porcelain, even gold—into king cakes to represent Jesus. If you were the lucky recipient, custom stated that you were king for a day and you had to buy the next cake or host the next party. Like most traditions on this list, the baby figurine idea had to be revamped so as to prevent lawsuits. Nowadays, bakeries sell the figurine separately for families to insert it themselves if they choose to. 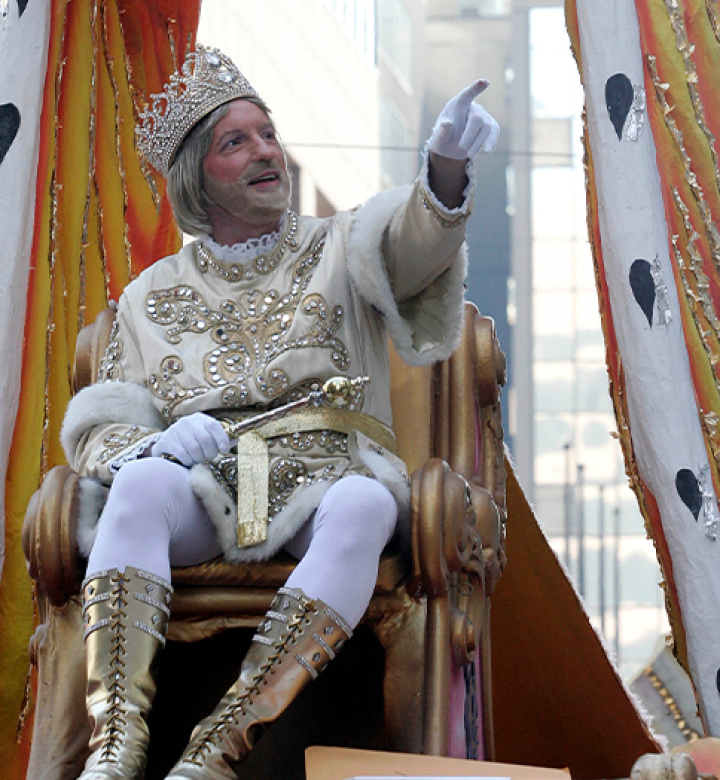 Rex is known as the King of Carnival, and he's been a Mardi Gras mascot since 1872 when a group of businessmen came up with the idea as a way to honor the visiting Grand Duke of Russia. Said businessmen formed the Krewe of Rex—a group responsible for many Mardi Gras traditions, including the notion of day parades. Suffice it to say, of all the parades that take place while the sun is shining, the Rex parade is a pretty big deal. 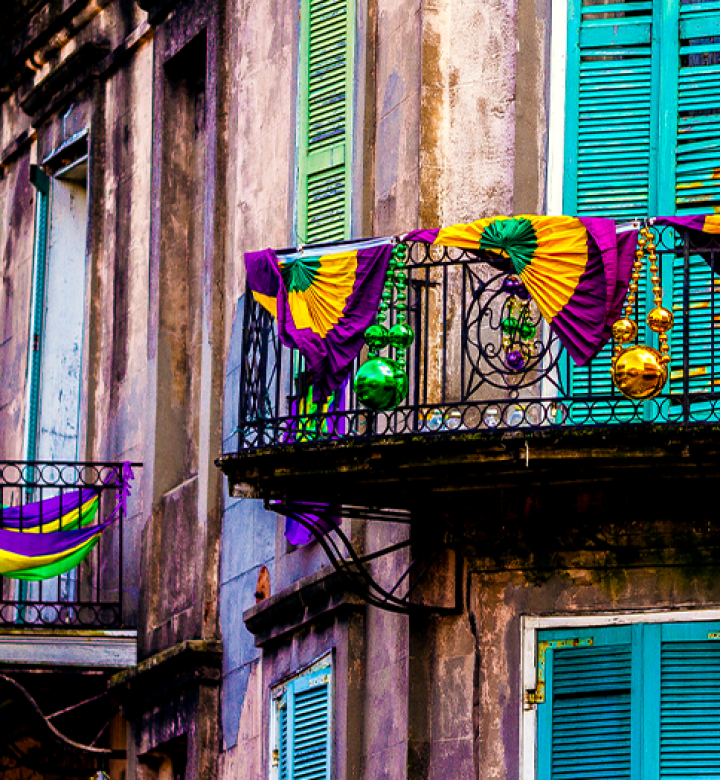 Purple, green and gold have been the official hues of Mardi Gras since the first Rex parade in 1872. As for why they were chosen? The story is a little complicated. But basically, the founders of Rex figured that the King of Carnival should have a flag and—with some guidance from the rules on regal shades—purple, green and gold are the colors that they picked to represent justice, faith and power respectively. The most important thing to know, though, is that you will see these colors everywhere at Mardi Gras and you’ll get more beads if you sport them yourself. 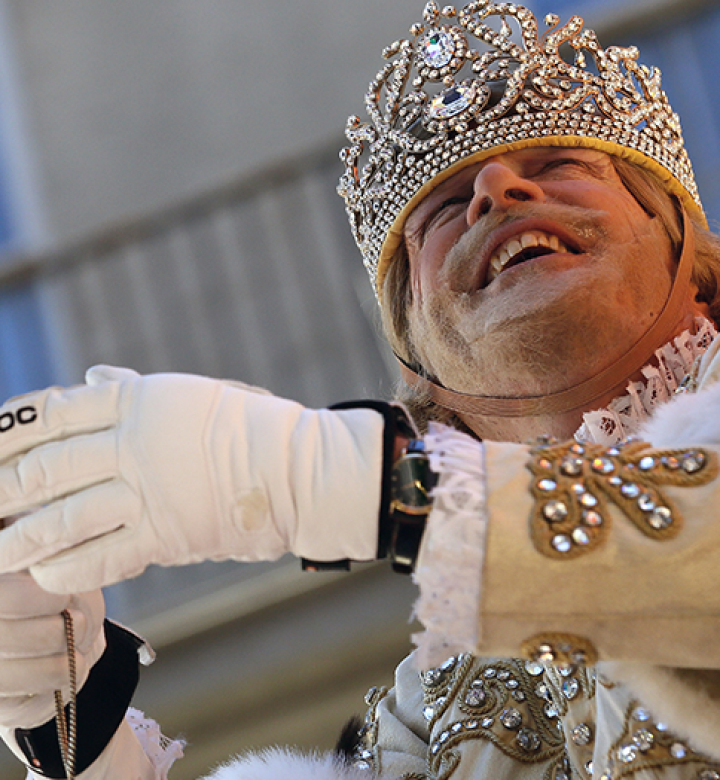 One more thing about the King of the Carnival, and this one is quick: Every year at Mardi Gras the mayor of New Orleans gives Rex the key to the city. Why? Because he’s king, of course. 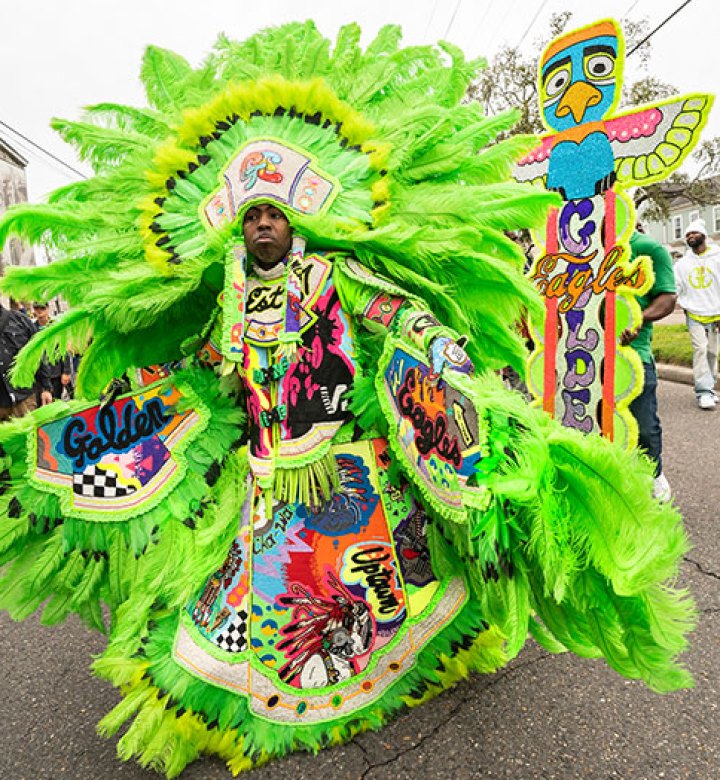 As you may have gathered, Mardi Gras was not an inclusive celebration at the beginning. In fact, Krewe membership was by invitation only, reports Mardi Gras New Orleans. Seeing that they wouldn’t be accommodated in the popular Krewes, Black residents of inner city New Orleans created their own organizations—the Mardi Gras Indians. Though the individual Krewe names are derived from imaginary tribes (mostly named after the wards participants come from), the blanket term, Mardi Gras Indians, is an homage to the Native Americans who often gave former slaves refuge when they escaped bondage. Though not as renowned as the more established Krewes, Mardi Gras Indian parades are just as elaborate, flamboyant and gallant.

7 Beauty Traditions We Learned from Our Moms