The 17 Most Haunted Places in and Around NYC

Who needs scary movies when you can hang out with actual ghosts in New York City? OK, we’re not becoming professional ghost hunters anytime soon, but there are lots of eerie locations in our own backyard, including abandoned buildings, burial grounds, literal haunted houses and that ice-skating rink you love so much. If you’re looking for something to get you in the Halloween spirit in the Big Apple, look no further. Here, 17 haunted places in NYC to put you in a spooky mood.

The 7 Prettiest Places to See Fall Foliage Near NYC 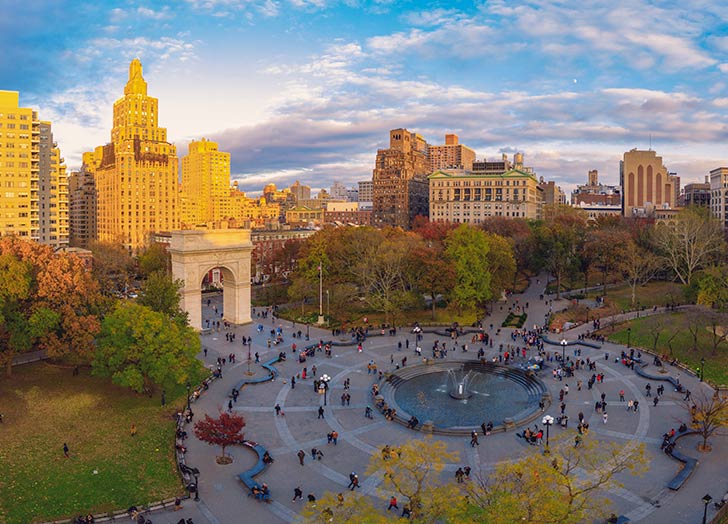 Yep, it’s a fun place to people-watch, but it’s also a great place to mayyybe spot the undead. The Greenwich Village landmark was originally a potter’s field (a public burial ground for paupers, criminals and victims of epidemics) until 1825. The remains of an estimated 20,000 bodies are currently resting under the concrete. Gulp.

SoHo wasn’t always a shopping hot spot. In 1799, it was Lispenard’s Meadow—home to the infamous Manhattan Well Murder. Gulielma Elmore Sands left her boarding house to meet her lover, Levi Weeks, for a secret midnight rendezvous and was found dead 11 days later at the bottom of a well. It was suspected that Weeks had killed her, but his legal team (including Alexander Hamilton and Aaron Burr) got him acquitted. The case was never solved, but a portion of the creepy well still exists in the lower level of the COS retail location at 129 Spring Street. 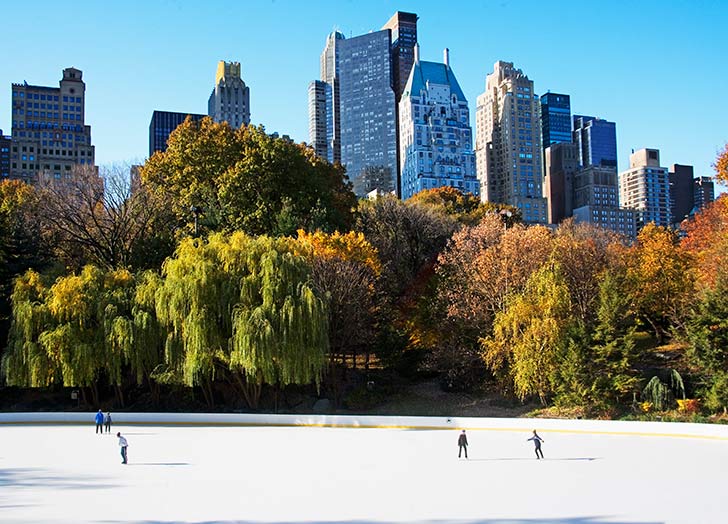 Go ice-skating in the park this winter and you might see the spirits of Janet and Rosetta Van Der Voort, two reclusive sisters who played there together as children. Their parents were so overprotective that the sisters barely left their Upper West Side apartment (except to do triple axels, apparently), and they both died there as spinsters. For years, New Yorkers have reportedly spotted two women skating in Victorian clothing in the middle of the night. 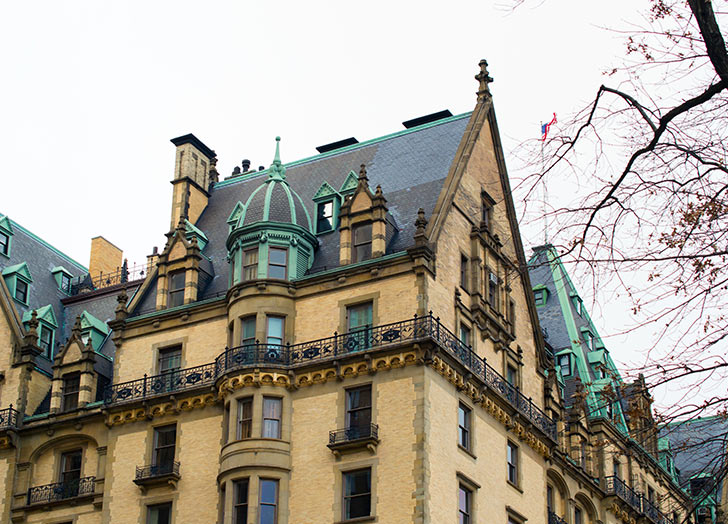 4. The Dakota, Upper West Side

After John Lennon was shot in front of the building on Central Park West, Yoko Ono said she frequently saw his ghost sitting at his white piano. Also, have you seen Rosemary’s Baby, one of the creepiest horror movies in history? It was obviously filmed there for a reason. 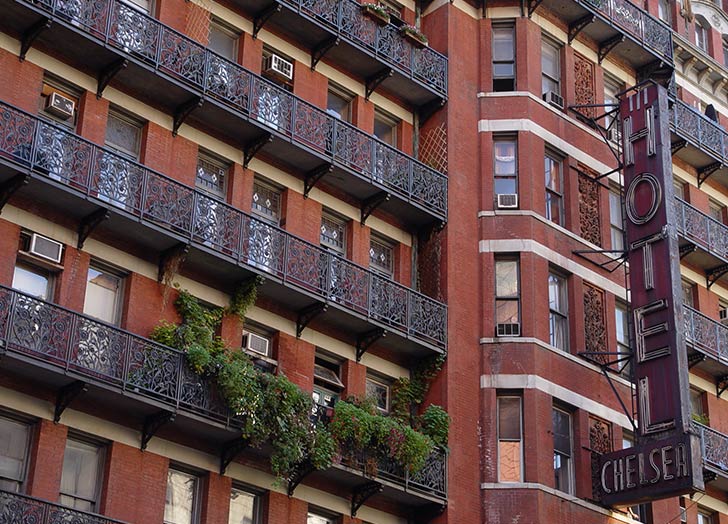 More celebrity ghosts! Everyone who’s anyone has stayed at the Chelsea Hotel, including Bob Dylan, Patti Smith, Tennessee Williams, Sid Vicious, Jimi Hendrix and Janis Joplin. Guests have reported ghost sightings throughout the iconic hotel, especially in room 205, where writer Dylan Thomas became ill before he died. Today, you can book stays at the hotel and explore the glorious, yet spooky, history. 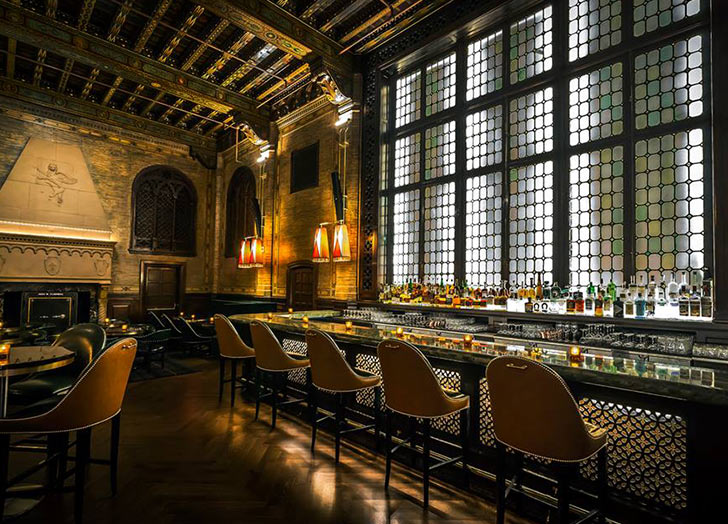 Courtesy of The Campbell

Originally the luxurious digs of millionaire financier and Credit Clearing House manager John Campbell, the space in Grand Central Terminal became a jail before being renovated into a cushy lounge ideal for sipping cocktails. The staff has reported a lot of freaky happenings but call the ghosts “fashionable and friendly.” Phew. 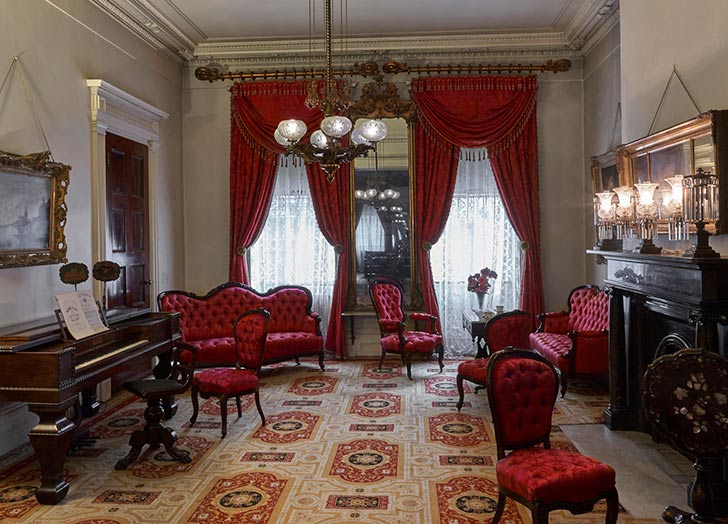 The Tredwell family lived in this house on East Fourth Street for 100 years before it became a museum and a national landmark. According to legend, Gertrude Tredwell, who was born in the house in 1840 and lived there until her death at age 93, kept her home in its original condition, even when the neighborhood began to decline. Since her death, strange and inexplicable happenings have been reported—sounds, sightings, smells—by staff, volunteers, visitors, even passersby: doors in the home open and close inexplicably, piano music plays at night, and visitors have reported the smell of gas lamps. 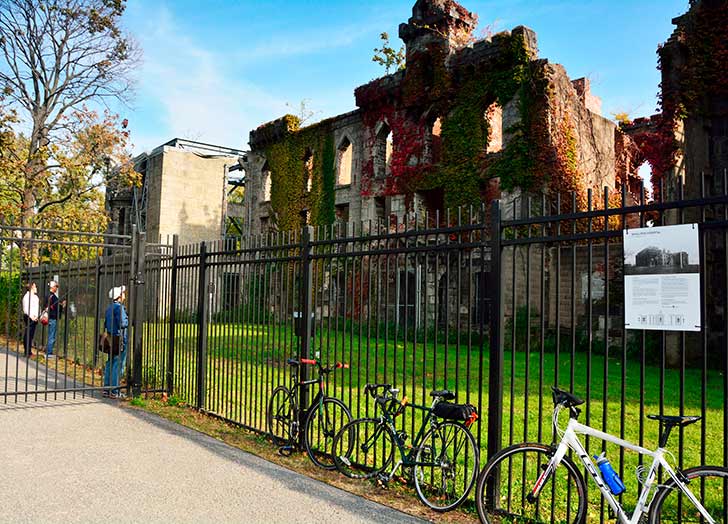 The abandoned hospital is one of the most haunted (and, um, terrifying) sites in all of NYC. Originally built in 1854, it housed smallpox patients for 20 years before going through a handful of changes—into a larger general hospital, followed by a nursing school—and then ultimately falling into disrepair. The creepy ruins (you know, the ones you can see from the FDR) are supposed to be renovated any day now, and it’s totally cool with us if they don’t finish anytime soon. 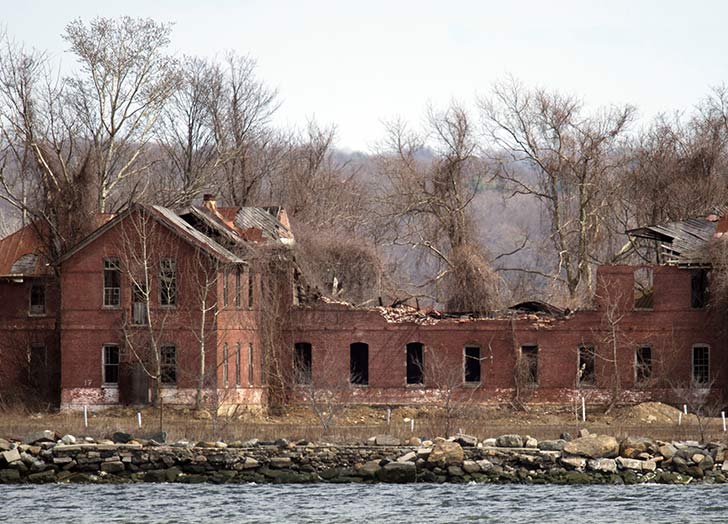 The only thing spookier than an abandoned smallpox hospital? An abandoned psychiatric hospital on a remote island with more than a million dead bodies buried on it. Located east of the Bronx, this spine-chilling NYC spot is accessible to the public for free by appointment only, and now also serves as a burial ground for thousands of people who died of the coronavirus. 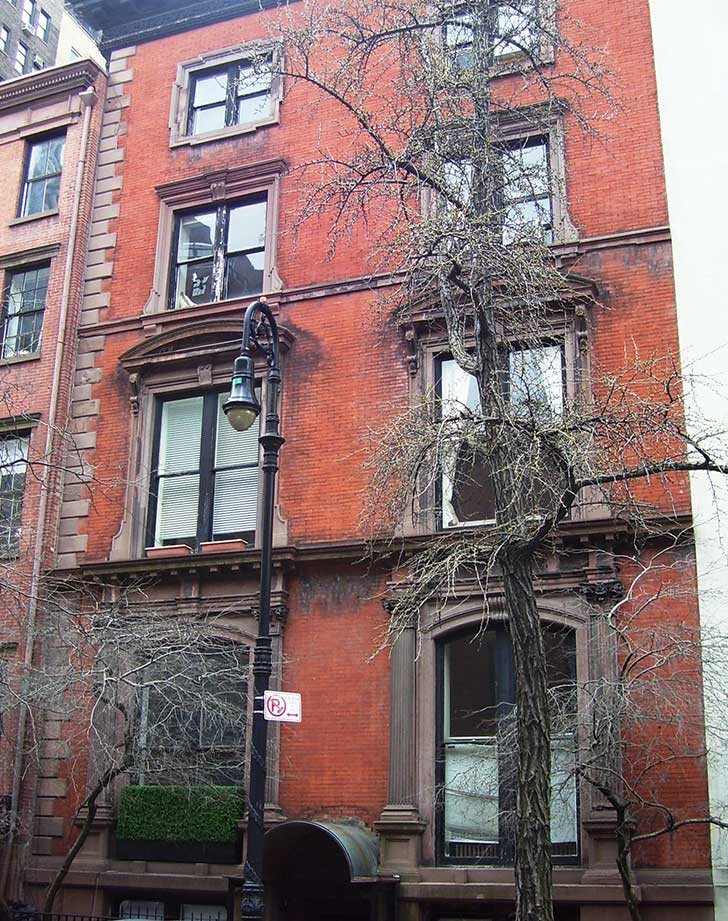 10. The House Of Death, Greenwich Village

Looks pretty cute from the outside, doesn’t it? This unassuming apartment building at 14 West Tenth Street in the Village was once the home of Mark Twain, and several residents have reported sightings of the famous writer. Although he didn’t die there, 22 others have (and yikes, some were really gruesome). 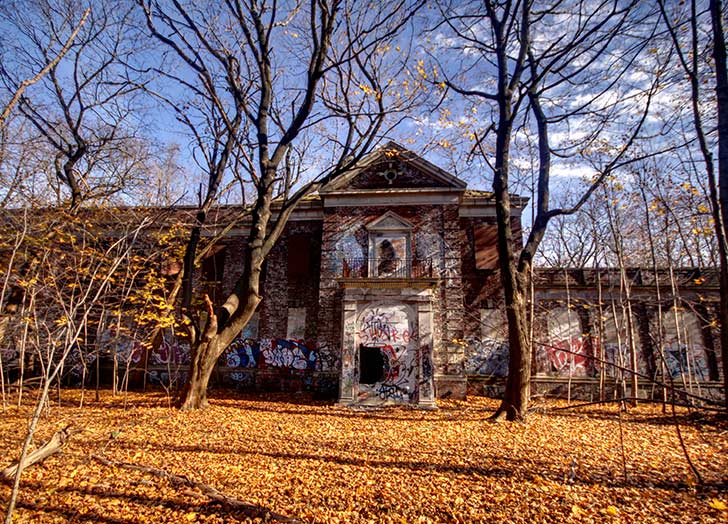 Oh, come on! This place has to be haunted. The crumbling remnants of this children’s tuberculosis hospital were abandoned for decades, but the campus is slowly being redeveloped into a working wellness center and a new pediatric hospital, which means the eerie rundown vibes won’t be around forever. (We can’t say the same for the ghosts, though.)

If you missed out on a chance to see Hamilton live then here’s the next spookiest thing: This romantic restaurant in the West Village was once Aaron Burr’s carriage house and he supposedly makes regular appearances there, along with his daughter, Theodosia. The restaurant is currently open for indoor and outdoor seating and staff and diners have seen Champagne glasses broken, paintings fall off walls, and spirits coming down the stairs. Honestly, we’d be happy to not be in the room where that happens... 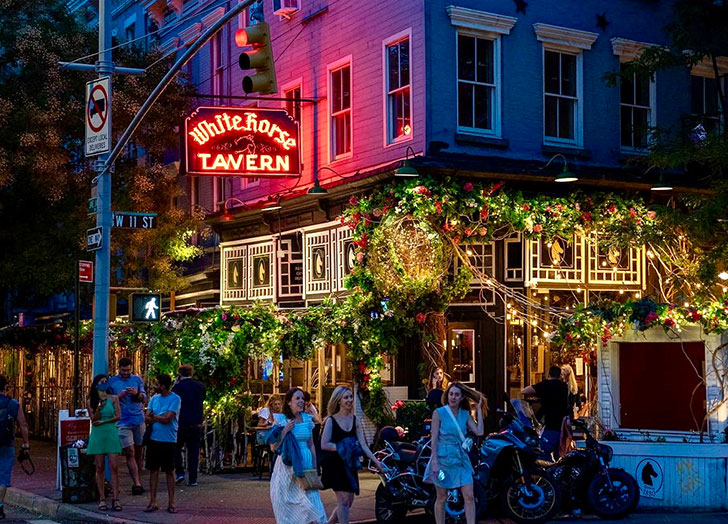 The White Horse Tavern has a reputation for being the most haunted bar in NYC. Rumor has it that the spirit of the aforementioned poet Dylan Thomas—best known for “Do Not Go Gentle Into That Good Night”—occupies the Greenwich Village spot, which was built back in 1880. In 1953, he was said to be attempting to out-drink himself with an alleged record of 18 whiskeys, before he stumbled out of the bar and passed out; he was then taken to Hotel Chelsea as we mentioned above, then St. Vincent’s Hospital, where he died. Visitors often report that the poet’s ghost can be seen sitting at his favorite corner table, even pouring mysterious shots and beers for the regulars. Um, cheers? 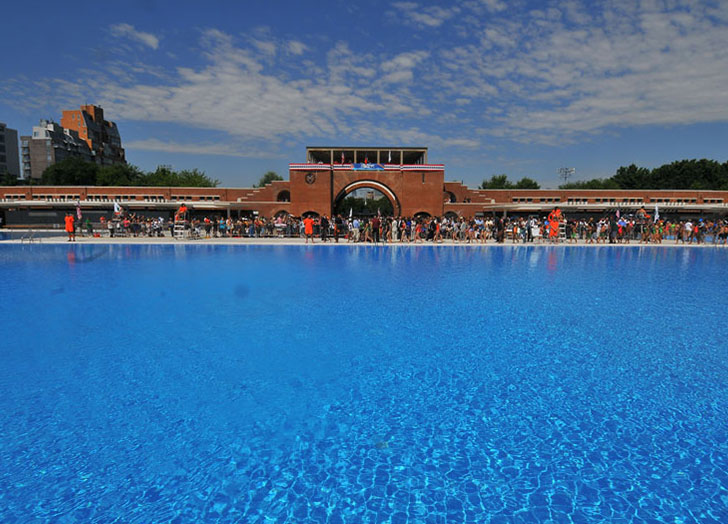 What might be your favorite spot to cool down in the summertime is also, apparently, ridden with paranormal activity. The public pool, located in McCarren Park on the border of Williamsburg and Greenpoint in Brooklyn, is said to host ghostly balls of light, and was supposedly the site of a little girl’s drowning in the 1930s, whose spirit has been reported roaming around the pool at night, crying out for help. Check it out for yourself if you dare (or at least get a nice dip in).

This northern Manhattan mansion-turned-museum was built in 1765 and served as General George Washington's headquarters for five weeks during the American Revolution—so you can bet there are some ghastly visitors lurking around the halls. Manhattan’s oldest surviving house has been investigated by countless ghost hunters for its sightings, voices and other disturbances that are said to come from the spirits of former residents, including soldiers, enslaved persons, and even former U.S. Vice President Aaron Burr, who must be busy haunting the whole city these days. The museum itself also hosts different paranormal historical tours for those who want to see for themselves. 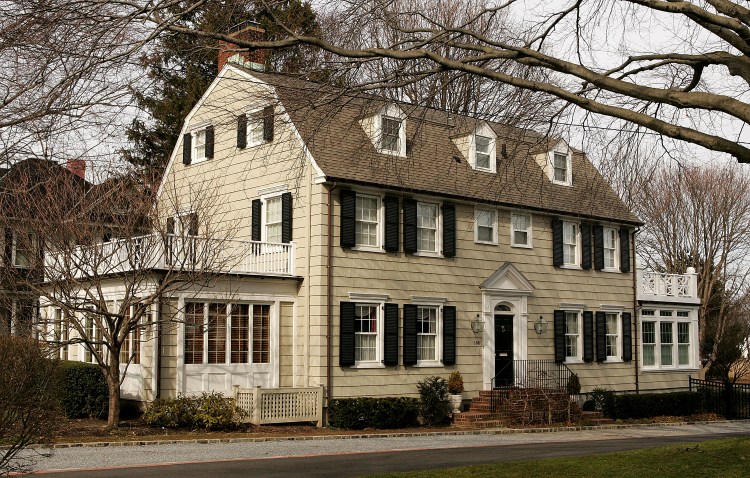 Ready to be spooked? This house was occupied by Ronald DeFeo Jr., his parents and four siblings—all of whom he brutally shot and killed on November 13, 1974. While this house isn't open to the public, you can find it at 108 Ocean Avenue in Long Island, NY, and was famously changed from 112 Ocean Avenue to avoid tourists flocking to the home. We don't blame you if you get a cold chill passing this infamously creepy, haunted home.

Sadly, this asylum was built to house orphans, ill people with deathly diseases like tuberculosis to poor people in the 1800s. There are likely many unknown bodies buried at this property in unmarked graves, as there are more than 1,700 deaths on record. Haunted North America listed this spot as the second most haunted place in the United States. Here, you can schedule private or public ghost hunts, tours and other spooky experiences.

Want to discover more fun things to do in NYC? Sign up to our newsletter here.