What Happened to Christina Vidal Mitchell, AKA ‘Taina’ From Nickelodeon?

Who remembers that early 2000s Nickelodeon show Taina? The series only ran from 2001 to 2002, but that theme song is forever stuck in our head.

Actress Christina Vidal Mitchell played the main character, Taina Morales, an aspiring teenage singer from Queens with dreams of making it big in Hollywood. Each morning, she commuted to a performing-arts school in Manhattan, where she took singing, acting and dance classes with her friends Renee, Lamar and Daniel (and of course, their nemesis Maritza). The episodes featured dream sequences where Taina performed songs as the big star she wished to become. Sure, the show was short-lived—but it's still a fan-favorite to many.

So, where is Taina (er, Christina) now? We do a deep dive on the iconic actress on PureWow's nostalgic pop culture podcast, 'What Ever Happened To…?'—where we come together to relive pop culture history and uncover what became of the celebrities and trends that defined our adolescence.

What Ever Happened to 'Out of the Box' Hosts Tony and Vivian? 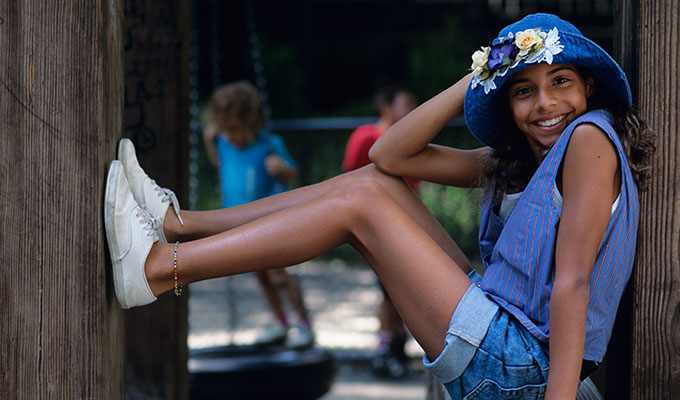 Like her character Taina, Christina grew up in Queens and went to school in Spanish Harlem. As the youngest child with two sisters and one brother, she watched her older sister, Lisa Vidal (who’s also an actress) starring in theater and TV. Naturally, she wanted to perform as well—and her elementary school teacher agreed.

“[My teacher] handed me the paper and said, ‘Look, you’re always disruptive and always in talent shows… you might as well put it to use. Why don’t you go on this audition?’ So my sister, Lisa—she actually took me on the auditions and coached me. And I ended up booking it. I was 10 years old, and it was a movie called Life With Mikey with Michael J. Fox,” she said in an interview.

By age 16, Christina moved to Los Angeles to go all in on her career. Taina was her first lead role, but she also starred in other ‘90s and early 2000s TV shows and movies, like Sabrina the Teenage Witch, See No Evil, Freaky Friday and Brink!.

If you were a fan of the Lindsay Lohan classic Freaky Friday, you know Christina's song, "Take Me Away," became a total teen anthem. Well, turns out, Christina recorded another song back then called "Anything Is Possible," for Byou—a workout DVD for girls by Sabrina Bryan (who you obviously remember as Dorinda, the Cheetah Girl).

Why Did Vine Shut Down? A Deep Dive Into the Beloved Short Form Video App

Where Is Christina Vidal Mitchell Now?

Even though Christina has the voice of an angel, acting has been her main gig. She's continued to land some impressive roles throughout the years.

In addition to Monk, ER and House, you can also see her in Castle, Being Mary Jane, Limitless—the list goes on. She was in Code Black from 2015–2016 and Training Day in 2017. Then, in 2020, she played a mom in the ABC sitcom, United We Fall. Unfortunately, the show didn’t get picked up for a second season (major bummer!). Most recently, she’s on Prime Video playing Mac Wilson in The Terminal List, which just came out in 2022.

She didn’t just play a mom on TV, though. That’s right—she has a family of her own. Christina married fellow actor and dancer Marcus Emanuel Mitchell in 2016.

Marcus has starred in Stomp the Yard 2, the YouTube Red series Step Up: High Water, and Victorious. (We love that they're both Nickelodeon alums!) He's also danced for some major celebrities like Taylor Swift, Katy Perry and Beyoncé. Pretty cool.

The couple has two young daughters.

Oh, and Christina’s Instagram bio reads, “That one actor from your favorite childhood show.” So, it’s good to know she looks as fondly on her early 2000s roles as we do.

In fact, she’s even down for a Taina reunion! She said on the “Hey Now, Hey Now” Podcast, “One of the actresses who actually played Maritza—she was supposed to be setting it up. I should call her and see if there’s any way I can help because I think it would be really fun. We should absolutely do that and get Nickelodeon involved.”

As for Brink, we’re still waiting on a sequel decades later, but the cast did reunite on Zoom in 2020.

So, that’s what ever happened to Christina Vidal (AKA our girl Taina).

Want more nostalgia? Tune in to 'What Ever Happened To...?' on Spotify, Apple Podcasts, or wherever you get your podcasts. Don’t forget to send your "What Ever Happened To's" to info@gallerypodcasts.com—or just comment on one of our TikToks @WhatEverHappenedToPod.

What Happened to Myspace (and Is It Even Still Around)?