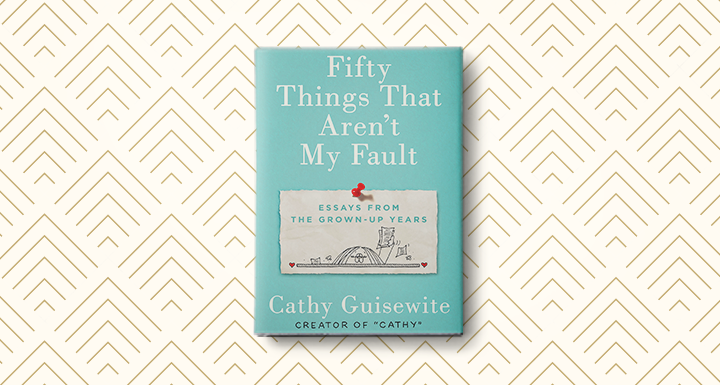 At its peak, Cathy Guisewite’s iconic Cathy comic strip (you know, “ack!”) appeared in more than 1,400 newspapers. Now, eight years after retiring Cathy the character (who graced newspaper pages for 34 years), the real Guisewite is back with a funny and wise memoir, Fifty Things That Aren’t My Fault: Essays from the Grown-Up Years.

In 34 short essays (interspersed with dozens of doodles and drawings), Guisewite gets real about life post-Cathy. With aging parents that don't want her help and a college-age daughter who doesn't need her help, she's forced to confront her second act and find new creative outlets after the comic strip that defined her career comes to an end.

In the amusingly self-deprecating “In Loving Memory of the Legs I Used to Hate,” Guisewite pulls a Nora Ephron and eulogizes the parts of her body she used to think were horrible but now “actually are horrible.” A funny—and relatable—story about the horrors of fitting room mirrors becomes a commentary on society's expectations on women, and how, lamentably, they haven't changed all that much. "I think of my mother, who used to apologize for giving me her thighs...I think of my daughter, who hates the perfect young legs she has now."

That essay isn't the only bait-and-switch: A piece that starts with an upbeat story about surprising her parents with TiVo takes a sad turn when Guisewite realizes that her well-intentioned gift “will destroy some of the things they can still count on to give structure and purpose to their days.”

Throughout, Guisewite is achingly relatable, as when she outlines the “Top Five Reasons I Didn’t Exercise Today.” Reasons like “I can’t find a hair tie” and “I exercised yesterday and I don’t look any different”—both of which we’ve absolutely used—remind us why we adored her chocolate-obsessed alter-ego in the Sunday paper.

Some of the pieces take a more solidly feminist tone than the comics, which were sometimes criticized for not being feminist enough. Guisewite writes about how differently society has treated her, her 90-something mother and her 20-something daughter, adding that, despite all the strides women have made in the last decades, she's frustrated by how much work still needs to be done.

“Of course I’m a feminist,” Guisewite refuted in an interview with her publisher. “My life’s work has been supporting women, trying to help women feel good about themselves by reassuring them they’re not alone. Are you a feminist if you sometimes need to bolt the doors and watch a sappy romance movie with a pint of ice cream? Yes, you are.”

The 38 Best Memoirs We’ve Ever Read

23 Halloween Books for Adults to Read During Spooky Season