I’ve Shaved My Armpits Religiously for 15+ Years. Here’s What Happened When I Stopped for a Few Weeks

What happens if you stop shaving your armpits? Are you more likely to have B.O.? Does it itch? Will you sweat more? As an already incredibly sweaty person, I was definitely most concerned with this last question when PureWow’s beauty director Jenny Jin asked if I might be willing to forgo shaving for a few weeks. You know, for science.

And so, this is how I found myself growing out my locks (which felt a little weird after shaving every couple of days for maybe two-thirds of my life) and regularly photographing my armpits (which felt extremely weird) for almost three weeks. Read on to hear how to it went and for the best tips if you want to go au naturale yourself.

Hair Type: I have very fine hair, but a lot of it. It’s also quite dark meaning it stands out against my pale skin very easily.

Normal Routine: I typically shave my armpits with my Billie razor, no shaving cream, every two to three days.

I Stopped Washing My Hair for a Week. Here's What It Looked Like Every Day 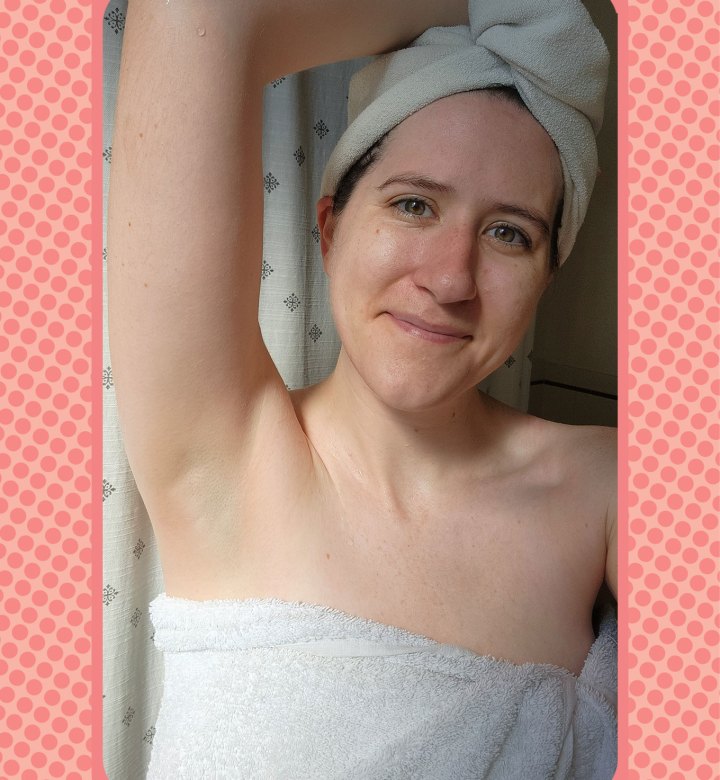 To get the most scientifically sound results, I started with freshly shaved pits, smooth as babies’ bottoms. Thinking ahead on the next few weeks, I realized I have, in all honestly, done something like this before, though with less intention. I love backpacking, and while I’ve never gone on a terrifically long trek, I have gone a week in the woods without a shower, which meant no shaving either. But I also have friends who stopped shaving years ago and have just let their natural armpit, leg and pubic hair grow in. “It was just so annoying,” Katie C., an art handler at an auction house in Los Angeles, told me. “And when I thought about it, I realized I was only doing it because people told me I had to. It’s dumb and sexist and people should be allowed to be as hairy or not hairy as they want.” Here, here! cried the feminist in me, and yet I was still unsure exactly how I would feel once things really got going. 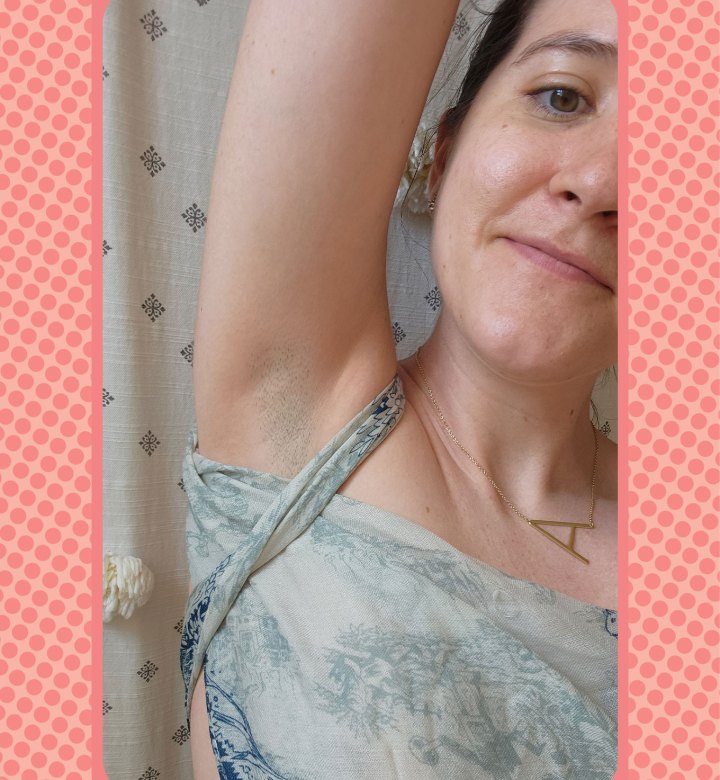 This is about how long I let my armpit hair grow before I’ll shave it—noticeable if you’re looking for it but not attention-grabbing.  I was also testing TikTok scarf top tying techniques so had my pits on full display as I twisted and tied scarves into chic, vacation-ready tops. But because I reach this level of growth pretty frequently, I didn’t care much about there being a little scruff. 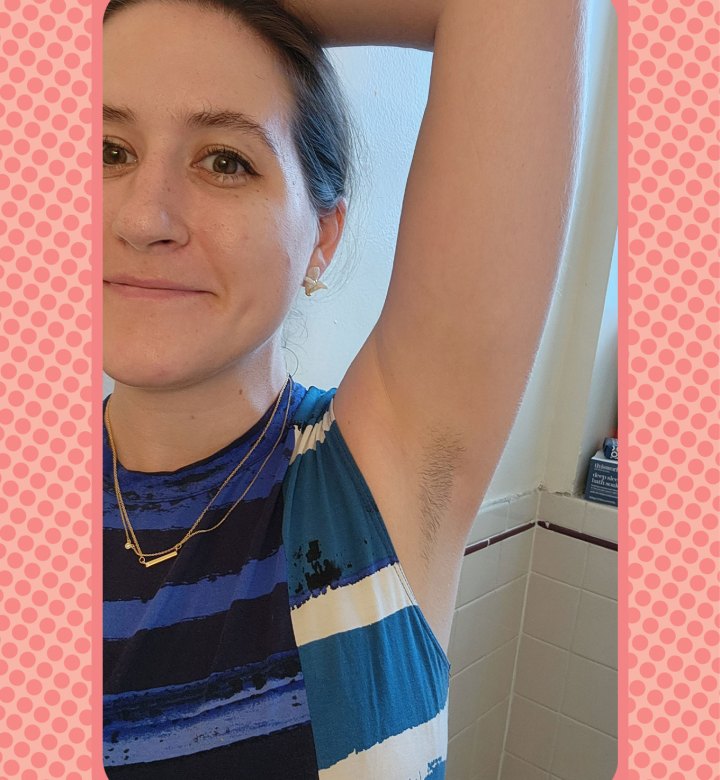 Now we’re cooking with gas. My armpit hair was really coming in now, but still hadn’t gotten nearly as long as I would have expected after nine days. This was also the point when I started really paying attention to all the questions and concerns I had at the outset of this experiment. Growing out my armpit hair thus far hadn’t made my pits super itchy, as I feared, and I noticed no increase in sweat or B.O. levels. I hadn’t wanted any bias before I began growing, so I waited until this point to actually do some research to see if my fears were legitimate in the first place. Turns out, they were not.

According to a study published in Behavioral Ecology and Sociobiology, not shaving your armpits has little to no effect on body odor. As long as you’re still regularly showering and using deodorant you should expect to smell the same as you always do. As for sweat, that’s also just a myth. Sweat is released as a cooling method from glands in the body regardless of whether or not there is hair present, and it is actually odorless until it comes into contact with bacteria (hence the importance of regular showers and deodorant). 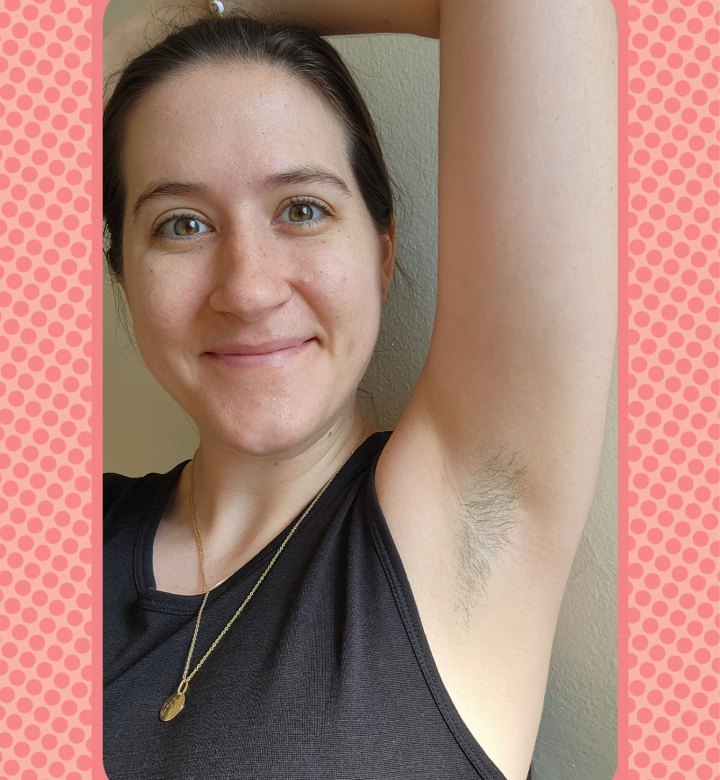 By day 15 I’d reached an interesting point where my hair looked purposefully grown-out and not like I’d just forgotten to shave or recently returned from a backpacking trek. I felt both liberated and self-conscious about my armpit hair. I kept thinking about the time I went with some friends to a little French restaurant in Seattle where the hostess wore no bra and had luscious, fully grown-out armpit hair. “Well, she’s certainly authentically French,” one of my companions commented once she’d walked away. I kept wondering what my armpit hair said about me, whether people thought I was French or a hippie or trying to make a statement. But as my friend Katie so thoughtfully reminded me, “Abby, who cares? The whole point is that you should do what makes you happy, your opinion is the only one that matters here.”

Two days later, on Day 17, I shaved my pits back down to zero. I did it mostly because I’d assumed I’d want to go back to hair-free armpits at this point (I’d promised three weeks of no shaving for the purposes of this article, so that commitment had come to an end) and because this is a habit I’ve had for what feels like forever. But as soon as I shaved I kind of wished I hadn’t. My hair hadn’t reached the point of being fully grown out and I was kind of curious what that would feel like in comparison to the 0.25 to 0.5-inches of growth I had when I shaved. I’ve since considered stopping again, but haven’t, I think it’s because shaving is such an unconscious part of my shower routine at this point. In much the same way that I’ve occasionally forgotten to shave for an extra day or two, I’ve now forgotten to not shave when I’ve considered growing my hair out again.

So, what happens when you stop shaving your armpits? In my case, basically nothing—or at least none of the things that I’d been concerned about at the start. My pits did not itch, smell or sweat any more than normal. I did not notice or care about the hairs under my arms slowly getting longer and longer. And on the plus side, not shaving meant no longer having to pay for razors and eliminating any risk or razor burn or ingrown hairs. What stopping shaving did do is force me to think more about why it is that I developed the habit in the first place and why folks, myself included, feel compelled to make assumptions about other based on their body hair. For some, the act of not shaving might really be a statement against the unrealistic expectations put on women. But it’s also just hair, and as Katie said, it should be of no concern to anyone but the person it’s growing on. Will I keep shaving? For now, yes, but I’m glad to know what might happen—or not happen—if I grow tired of it.

The Most Common Shaving Mistakes Everyone Makes, According to People Who Design Razors for a Living

beauty
by Greta Heggeness
We Compared This $8 Dupe with the Viral Color-Changing Blush
beauty
by Olivia Dubyak
Augustinus Bader for 25% Off? Yes, Please—and It's Exclusive for PureWow Readers Only
beauty
by Chelsea Candelario
Kate Middleton Swaps Her Signature Waves for Sleek, Straight Locks
beauty
by Olivia Dubyak
This Sunday Riley Sale Will Save You 25 Percent On Good Genes (& It's Just for PureWow Readers)
beauty
by Jenny Jin
The One Ingredient a Beauty Editor Wants You to Nix from Your Winter Skincare Routine
beauty
by Karelle Mckay
We Tried the Viral Paraffin Wax Foot Warmer—Here’s Our Honest Review