The busy woman’s conundrum: You sit down to get a manicure, but you just can’t relax because you have three unrecognized missed calls and two texts you couldn’t respond to because wet nails, people. Or say you really want to enjoy a massage, but you can’t stop your mind from racing…and the masseuse is a little too chatty for your liking. Well, now there’s an app for that. It’s virtual reality (aka VR), the technology that uses a headset and CGI software to transport users into a 3-D, hyperrealistic world. We visited two local businesses where mani-pedis and massages involve donning headsets and relaxing into a world of tranquil water vistas with zero interaction from well-meaning staffers. It sounds like an outtake from Black Mirror, but it’s real and waiting for you in Santa Monica and Beverly Hills. 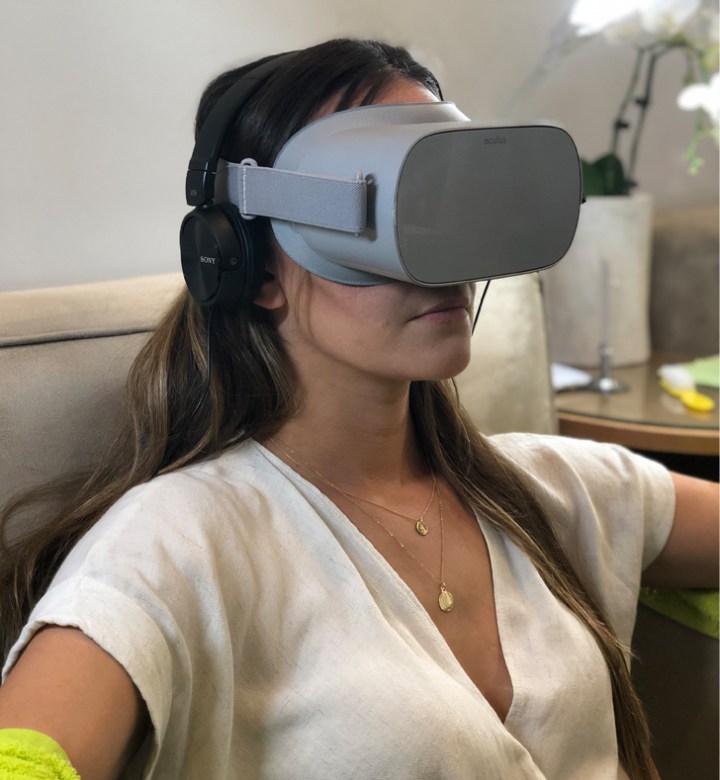 A Mani-pedi On The Beach

When I checked in for my virtual reality mani-pedi at Bellacures salon in Beverly Hills, my first thought as I looked around the airy loft was Who needs to escape this? And the answer, of course, was me since per usual I was running late, feeling guilty about taking time for self-care and tense about everything from work deadlines (more lateness) to my fam’s weekly meal plan (nonexistent).

I sat down at a mani-pedi station and was handed a VR headset to put on. I was initially a bit [eye-roll emoji]—I’d tried VR before, using a cheap cardboard headset that fit my iPhone. But that simple version left me a little nauseated when I turned my head too fast, and frankly, since I’m not some sort of gamer on a mission to crown the hidden dwarf with a trunk of gold (or whatever baroque fantasy is happening in my imaginary Return of Zelda: Capitalist Edition), I’m not really interested. But after my manicurist added headphones with muted wave sounds on top of my VR headset and the imagery began, it was game on.

I found myself on a deserted beach at what looked to be low tide. I turned my head to the right and left and saw nothing but coastline and more gentle waves. What the Zen Buddhists call my “monkey mind” resisted the imagery at first: OK, great, I got it, next image please. Then my thoughts darted to This headset isn’t the most comfortable. And Wait, did I choose the right color for my pedicure and manicure? But by then my manicurist had dipped my hand in warm water, and my feet had been in the soapy foot bath for a couple of minutes, and I felt a major exhale escape my body and decided to just go with it. As the technicians washed, exfoliated, massaged and painted my extremities, nothing much happened on my virtual beach. But the light sun and gentle waves chilled me out like I wasn’t expecting, and by the time my nails were done, I came out of a sort of unwitting beta-brain-wave mode and felt like I’d had a catnap. 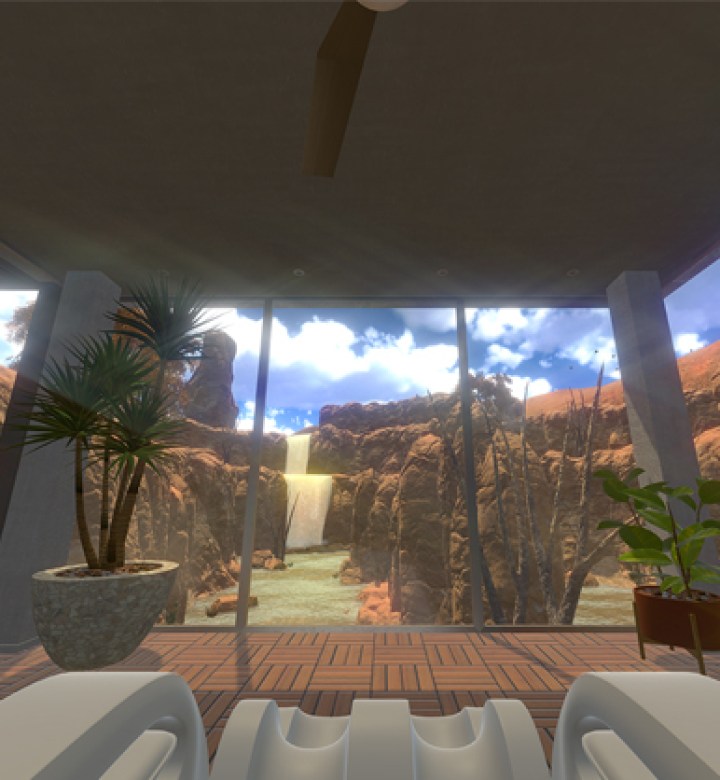 A Massage Under A Waterfall

Next I visited Esqapes, a new business that touts “virtual reality massages.” Located in the SAG-AFTRA building on Wilshire, my first thought was If anyone is going to get this concept, it’s an actor. ﻿That’s because this setup not only has you entering one of ten immersive fake worlds engineered to seem relaxing (a tropical jungle, say, or resort poolside), but you experience it while being kneaded by a massage chair that’s way more effective than any airport or mall massage recliner.

The office environment of Esqapes is more sterile than the aromatherapy-and-crystals decor of most L.A. spas, owing to its development—it’s the brainchild of a video-game veteran, not a resort owner or empathic healer. But that might be a good thing if you’re looking for a quick fix to your stress (the massage takes only half an hour). I lay back in the huge padded recliner and a staffer helped me put on the headset and headphones. Then I rested my arms in between padded plates at my side on the armrest. Suddenly, I was in a screened porch overlooking a multistory waterfall. Birds flew by, as well as butterflies. There were small boats in the distance. Good job creating this world, gamer-entrepreneur guy. Then, as my arms started getting mashed between massage plates and twin balls began furiously kneading my tense neck muscles, I thought nothing at all. 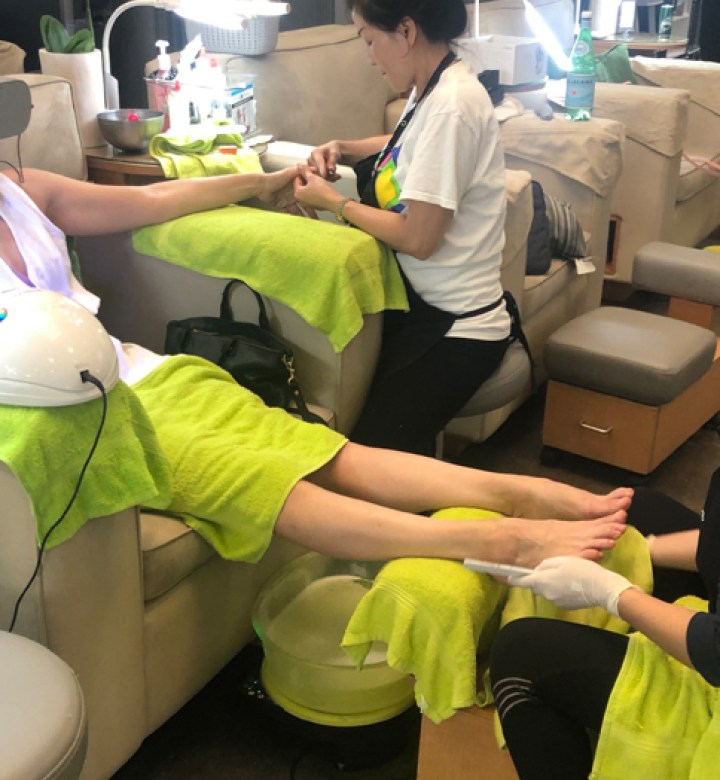 For early adopters of new tech, virtual reality is a fun add-on to your beauty or wellness regimen. It’s weird, it’s transporting and it makes for a great Instagram Story. As for mere mortals, the rest of us out here still trying to sync our Bluetooth and avoid dropped calls, there’sa higher barrier to entry, as the marketers say. The headsets are a bit awkward-fitting and clunky. The vibe of getting your nails done in room full of people while wearing a weird-looking headset on your face is strange. You might feel a slight bit claustrophobic.

But if you give the experience a few minutes (how quick we are to discard the uncomfortable, even if we’re promised a greater good if we wait it out), you will get past the strange new physical sensations and really feel like you’re watching that waterfall or sitting on that beach. And the relaxation benefits are amped: My half-hour massage ($45) at Esqapes felt like a much longer experience (in a good way),  perhaps because the chair’s many simultaneous rollers feltlike a four-handed massage. The Bellacures mani-pedi (a VR mani is $55; a VR pedi is $60) actually made me forget about my life worries and filled my head with pleasantly beachy non-thoughts.

My favorite part of both experiences, though, wasn’t the gorgeous beach imagery or the soothing waterfall vista, but a unique aspect of VR. When you’re wearing the goggles and you look down, rather than seeing your own body, you see an empty chair, since the image developer has no way of seeing who will be using the headset each time it’s put on. The sensation of looking down to find your torso, your legs, your very self erased is super eerie and actually quite liberating. You are the ghost in the machine, free for a few moments of the material world, which to my mind feels better than any getaway IRL.