Help! My Partner Snores and It’s Ruining Our Relationship 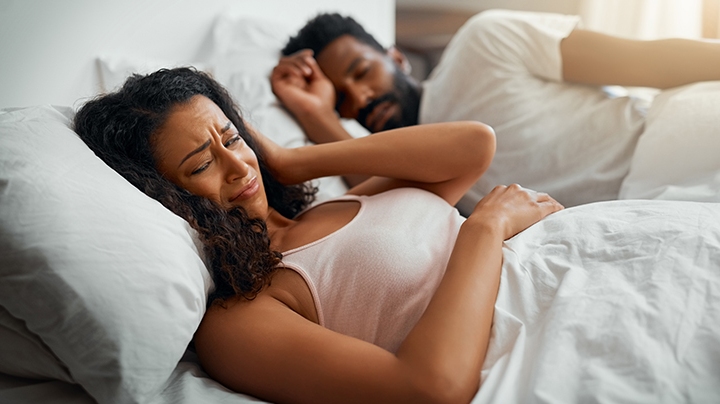 After a relaxing bedtime ritual (ahem, scrolling through Instagram), you’re finally settled in for the night and looking forward to getting your eight hours of beauty sleep. There’s just one problem: Your partner’s snoring sounds like a giant lawnmower is lying in bed next to you. Other than filing for divorce (which doesn’t seem too far-fetched after three days of no sleep), what can you do? We tapped the experts to find out.

Is this a relationship deal-breaker? Of course not. But according to relationship expert to the stars Anita Avedian, snoring can be a real source of tension between couples. “Feelings of shame and guilt are common to the snorer for not having control over their overnight sleep patterns, whereas the partner may develop feelings of resentment, especially when they are not having an equal quality of sleep,” she says. Sound familiar?

Argh, why is this happening to me? First of all, cut your S.O. some slack—snoring is very common, Lawrence Shulman, DO, chief of the division of pulmonary and sleep at ProHEALTH Care, tells us. In fact, almost 20 percent of the population has some form of it. “Snoring is caused by a vibration of the tissues in the upper airway that happens at night,” he says. “When we fall asleep, the musculature and soft tissues in the back of the airway relax. When air flows over the relaxed tissues, the vibration sounds like a snore.”

But it sounds like a chainsaw. If the snoring is extremely loud or accompanied by gasping or choking, then it could be obstructive sleep apnea—something your partner should talk to their doctor about. “Obstructive sleep apnea is a severe form of snoring where the airway collapses on itself during the night,” Shulman explains. “Your body, in response to the airway becoming obstructed, tries to force the airway back open. This is called an apneic event (i.e., stopping of breathing).” Not only does this disrupt the sleep cycle (leading to fatigue and sleepiness during the day), but it could also be dangerous. Hypertension (high blood pressure), high cholesterol and diabetes are all directly linked to sleep apnea, Shulman says. And as irritating as your partner’s snoring may be, you obviously want to make sure that it isn’t due to a serious medical issue.

So, it’s not sleep apnea, but it’s definitely annoying. What else can I do? There are plenty of things your partner can try to improve things in the bedroom, including sleeping in a non-supine (i.e., not on their back) position and steering clear of smoking and alcohol, both of which can make snoring worse. Shulman also tells us that excessive weight can be a factor.

I’m seriously considering sleeping in separate bedrooms. Is that bad? “Sleeping in separate rooms can be constructive and need not be associated with any sort of societal stigma,” Maria Sullivan, dating expert and vice president of Dating.com tells us. In fact, it could improve your relationship in more ways than one. “This is one of the most underrated, effective ways to up-keep chemistry; by treating sleeping arrangements as less of a given, couples never really stop ‘dating’ each other.” A night of blissful rest? Sounds pretty romantic to us.