This Dating Trend Is So Millennial, We Can't Even 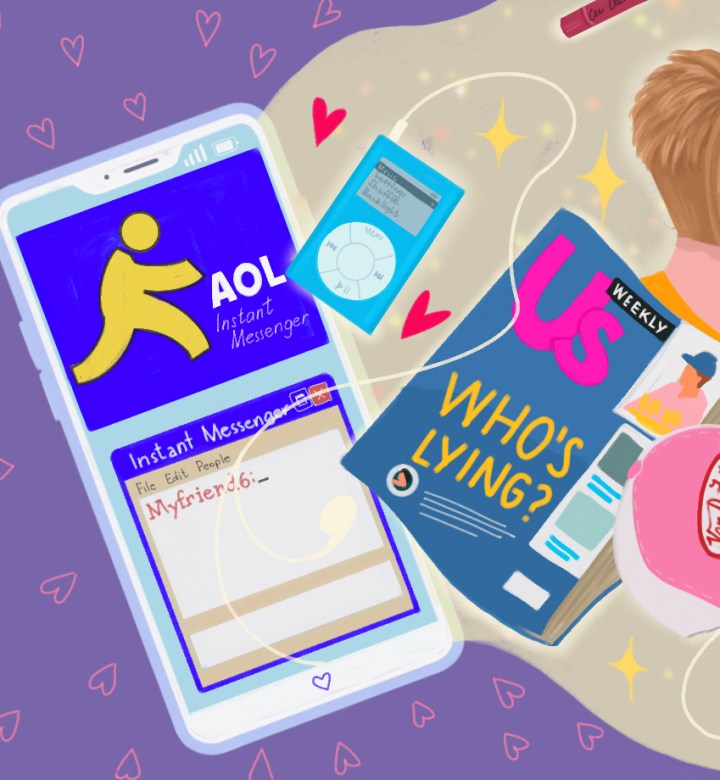 Millennials cannot get enough of the early aughts. They revel in the fact that they were the pioneers of baby hairs, velour tracksuits and Barbiecore, long before Gen Z swooped in and re-branded all the cool trends as their own. And it seems that wistfulness is seeping into millennials’ dating app profiles. Yep, millennials according to a survey from Plenty of Fish, millennials are evaluating potential matches based on whether or not they share the same fondness for the early ‘00s. This phenomenon is called “nostalgia-stanning.” Here, we explain

According to the dating app, nostalgia-stanning is the integration of aughts-era (2000 to 2009) dating habits and trends into the present-day dating experiences. Fifty-seven percent of singles surveyed agreed that it’s a turn on when they’re on a date with someone who gets the same early ‘00s references. Meaning, a second date is likely when both parties get the “You jump, I jump,” reference from Titanic, for example. This is especially relevant considering the fact that respondents said they’re mostly evaluating entertainment interests, with 29 percent saying music is the primary point of reference, while 27 percent say movies were theirs.

But it’s not just bonding over 10 Things I Hate About You and Evanescence that’s got millennials pinning for the past. Plenty of Fish also found that even though Sidekicks and Razrs are history, the days of kissing through the phone may not be null and void, as 39 percent of millennial daters said they’re still very much into talking over the phone into the wee hours while getting to know someone. And when it comes to making plans, instead of going back and forth and sending link after link in a text thread, millennials prefer planning their dates over the phone, you know, to avoid any misunderstandings.

But why has nostalgia-stanning taken off with millennials?

Between the pandemic, inflation and the looming recession, figuring out why millennials are so gung-ho about the past is no complicated mission. Simply put, it offers reprieve from the current state of affairs. The Plenty of Fish survey found that 67 percent of respondents admitted to being nostalgia-stanners because life felt easier back then. And it makes sense. Between 2000 and 2009, the 26 to 41 demographic surveyed were either wee tots whose primary responsibilities were to make sure homework was done and the sink was cleared before the highly anticipated premiere of That’s So Suite Life of Hannah Montana on Disney Channel or, they were young adults, barely out of college and starting to figure out things for themselves. Now, that’s all changed, and that same demographic is trying to see about buying homes in a tough economy and making sure that 401K is intact. So, nostalgia-stanning is not just another pesky millennial habit, but an important and necessary distraction from the present.

What does this mean for dating?

Nostalgia-stanning notwithstanding, it’s not lost on millennials that technology has made dating much easier. Fifty-eight percent of respondents gave new technology a big thumbs up because it allows for instant communication and puts the kibosh on things like having to talk to your crush after 9 p.m. because you need the free minutes. Forty-eight percent also said that this current era is so much better for dating because apps and social media make it easier to check compatibility before you even go on an in-person date. So you don’t have to have dinner with a person who (mistakenly) believes both Jack and Rose could’ve fit on that raft at the end of Titanic, for example.

wellness
by Sydney Meister
Are You Dating Someone with Avoidant Attachment Style or Are They Just…Not That Into You? We Asked a Therapist
wellness
by Samantha Heapps
How to Respect People’s Boundaries with Grace (Even When It Hurts)
wellness
by Marissa Wu
5 Not-So-Small Ways I’m Getting My Greta Thunberg on in 2023
wellness
by Dana Dickey
The 22 Best Places to (Discreetly) Buy Sex Toys Online in 2023
wellness
by Sarah Stiefvater
Everyone Has a Lust Language—What's Yours?
wellness
by Alexia Dellner
The 20 Best Sex Toys on Amazon, According to Enthusiastic Reviewers