We Could All Learn a Thing or Two About Empathy from Dr. Pimple Popper 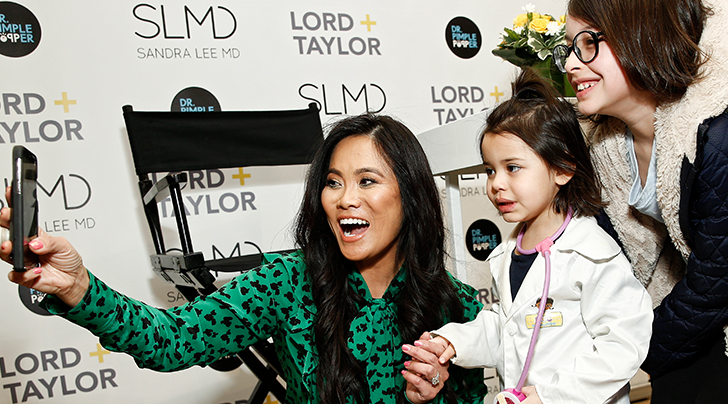 When people first heard about TLC’s Dr. Pimple Popper, there were lots of, “Oh, now she’s getting a show?” This was the same Dr. Pimple Popper—aka Dr. Sandra Lee—who gained notoriety by posting close-up videos of vivid extractions on YouTube and Instagram. Cathartic to some, disgusting to others, there is something inexplicably taboo about the whole thing. I, admittedly, love it.

But as much as you may want to write off Dr. Lee as the Kylie Jenner of dermatology, if you actually watch her TV series, or even her social vids, you gain a sense for the woman that goes well beyond the pus purging. You realize almost immediately that Dr. Lee is kind. She cares about her patients—their physical comfort level, of course, but perhaps more importantly, their emotional comfort. I have proudly consumed lightyears of medical reality television—Botched, Mystery Diagnosis, I Didn’t Know I Was Pregnant—and Dr. Lee is one of the only doctors who consistently practices empathy, and the simple act of caring is pretty remarkable.

Just like the doctor herself, the show is so much more than meets the eye. With a lighthearted name, viewers feel invited in to watch an easy before-and-after pick-me-up. But once you’re there, the show offers up a whole lot more than pimple popping (there are lipomas, pilar cysts, psoriasis and more!). On paper, a cyst may not seem like a big medical issue. And, actually, on paper it’s literally not. In fact, if the removal of a cyst is not medically necessary, insurance (probably) won’t cover it. But what if that cyst is on your forehead? And what if it’s the size of a tennis ball?

I may not have had tennis ball-sized cysts on my forehead, but I’ve suffered from acne. I know what it feels like to have something festering on your body that you can’t control. Everybody else notices it, wondering why you don’t fix it. Or at least you think they do. It consumes so much of your brain power and eats away at your confidence slowly but surely. And that’s how I’ve felt having just a few pimples on my chin.

The weird thing about a medically insignificant medical problem like, say, a tennis ball-sized cyst on your forehead, is that you are stuck between a rock and a tennis ball-sized cyst on your forehead. On one hand, you have professionals shooing you away, telling you it’s not life-threatening, and on the other hand everyone else is wondering why you didn’t take care of this thing. Why did you let it get this bad? It’s the shame game, and there is not one patient on Dr. Pimple Popper who isn’t navigating this maze.

One of the most extreme cases I’ve watched involved Diane, a woman who decided not to have children as to not pass on her neurofibromatosis, a genetic condition that covers her head to toe in tiny, benign tumors. There’s also Hilda with hidrocystomas (small fluid filled cysts) around her eyes who changed jobs from server to back-of-house dishwasher, so she could more easily hide her affliction from judgmental customers. While these are some of the most intense cases, Dr. Lee’s patients are generally emotionally devastated—if not completely hopeless—and yet, they’re also simultaneously being told they’re overreacting.

It’s uncanny how often the patients will say they’ve named their growth, “And this is Fred!” It’s funny at first. But it’s also profoundly sad. To a T, each patient has acknowledged the growth as a separate identity from self as some sort of coping mechanism.

By the time a patient is sitting in the operating room, we’ve met their “Fred,” seen their home life and come to understand the depth of their suffering. We know how much is at stake. And this is where Dr. Lee comes in. She enters the room with warmth and brightness. She often remarks on something physically positive about the patient, “Your eyes are so beautiful,” and then if the problem is noticeable, she’ll comment, “Oh, I think I know why you’re here. Do you mind if I take a look?”

Dr. Lee does two things that make her patients comfortable: she acknowledges them as humans, but she also acknowledges that their reason for being there is real. (She also lets the patient know she appreciates how far they’ve traveled to see her, something you never see on a show like Botched.) After watching almost every episode of Dr. Pimple Popper, I can tell you the healing starts here in this first interaction—it begins out of the gate with empathy.

In both Diane’s and Hilda’s cases, they couldn’t just cut out their conditions like a typical cyst or lipoma. Their conditions were chronic. And while Dr. Lee treats them—she removes many of Diane’s tumors and Hilda’s cysts, both women know the growths will more than likely come back. Even as a viewer, the physical before and after of the two women is not exactly revelatory, but the emotional impact will bring you to tears. They will never have flawless skin—not even close—but Dr. Lee showed them they have are worthy of her attention and of proper medical care.

There’s another patient who comes to mind, Louis, a 70-year-old man who visits Dr. Lee for a mysterious condition making his skin so extremely dry, patchy and scale-like, he can barely walk without a cane. He believes it’s the effect of chemicals from when he served in Operation Desert Storm. He says this many times; it’s clear he believes this so much to his core that it’s part of his identity—and there’s something about how he’s knit together his time in Kuwait with his condition that seems highly intimate and so essential to his personal narrative that it would be destructive to tell him anything otherwise.

After an examination and biopsy, Dr. Lee informs Louis that he has ichthyosis, an acquired (as in, non-genetic) extremely dry skin. There are some simple therapy methods he can do to improve his condition—which he does, and the results are pretty miraculous; he has started walking without a cane.

Also miraculous is how Dr. Lee never overtly tells Louis the condition probably has nothing to do with chemicals from war and that it’s probably the result of just letting something bad get worse. Instead, she tells him they can never know for certain what caused the problem, and yet it’s pretty clear to the viewer that Kuwait had nothing to do with it. It seems like a simple act of kindness, but Lee’s slight omission of this fact let her patient leave with his head held high, his identity intact.

Dr. Lee started offering free extractions to patients who would let her tape them. But her success cannot be wholly attributed to the fact that she was an early adopter of exchanging reality content for simple medical procedures. Sure, that’s part of it. But Dr. Lee’s show is a haven for those who were scared off from doctors because of price, time or, most importantly, feeling unwelcome.

Why they continue to flock to her?

Honestly, it’s probably because she’s so damn nice to them.