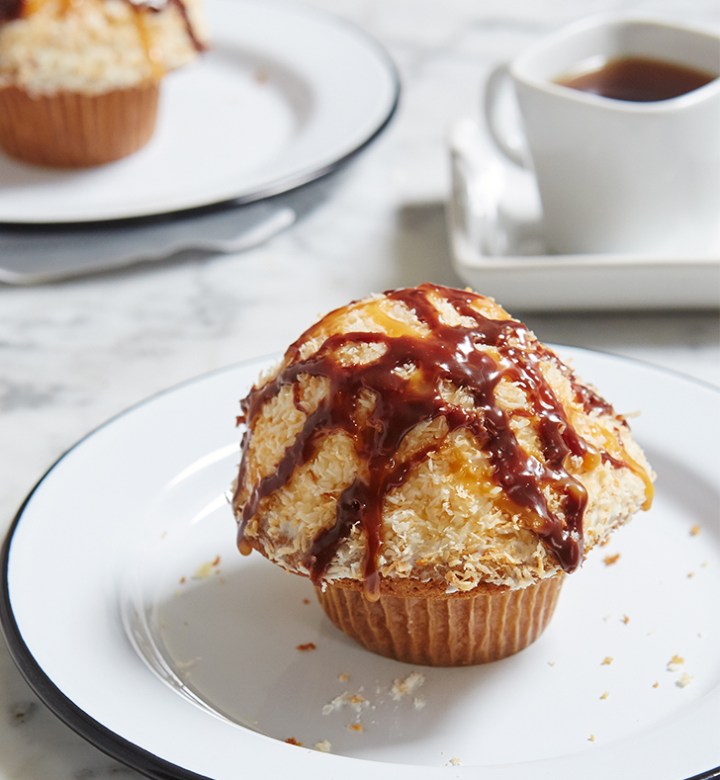 Isn't it the saddest when you run out of your favorite box(es) of Girl Scout Cookies? If Samoas are your jam, then this cupcake recipe inspired by said cookies is the only thing you'll need to get you through. All right, let's get baking, shall we?

2. Make the Cupcake Batter: In the bowl of an electric mixer fitted with the paddle attachment, cream the butter with the sugar until light and fluffy, 4 to 5 minutes.

3. Add the eggs one at a time, scraping the sides of the bowl well after each addition. Add the vanilla and coconut extracts and mix to combine.

4. In a medium bowl, whisk the flour with the baking soda and salt to combine. Add half of the flour mixture to the mixer and mix until incorporated.

5. Add the milk to the mixer and mix until incorporated. Add the remaining half of the flour mixture and mix to combine. Stir in the shredded coconut.

6. Divide the batter evenly among the prepared cupcake liners. Bake until a toothpick inserted into the center of a cupcake comes out clean, 18 to 22 minutes. Cool completely.

7. Make the Frosting: In the bowl of an electric mixer fitted with the paddle attachment, cream the butter with the confectioners' sugar until light and fluffy, 3 to 4 minutes. Add the milk and vanilla extract and mix well to combine.

8. Scoop a rounded ¼ cup of frosting on top of each cupcake and spread to the edges, leaving the frosting mounded in the center. Roll the frosting in the toasted coconut to coat.