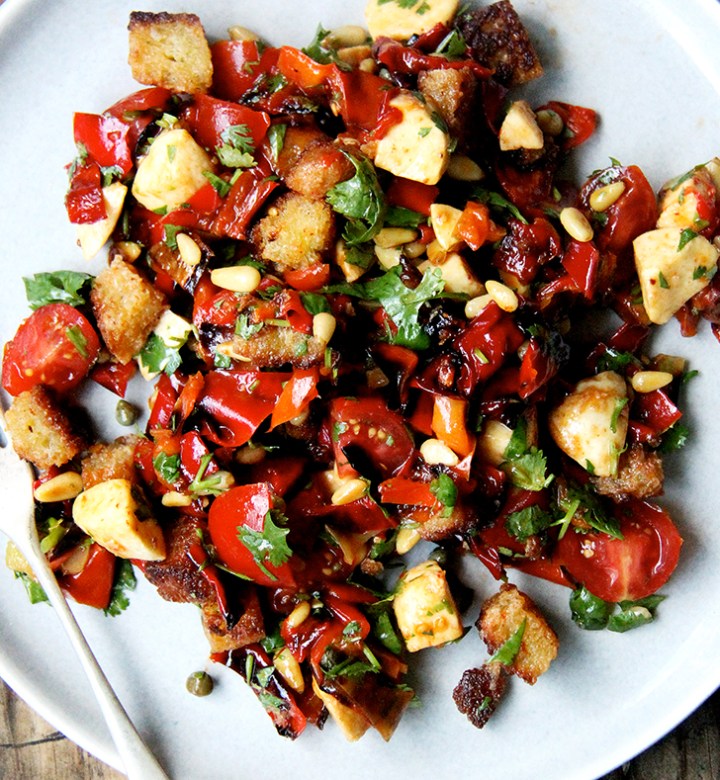 When the temperatures outside are at an all-time high, we love leaning on summer salads to fill our plate. But we’ll admit that the chopping and prepping is a lot of work. Enter this “magic” pepper salad with pine nuts and capers from food blogger Alexandra Stafford, which requires little effort to turn out a satisfying meal.

According to Stafford, who adapted the magic peppers by Sally Schneider’s The Improvisational Cook, these caramelized bites can be used in countless ways, from pasta salad to bruschetta and free-form tarts (hence the name “magic”). Allow this panzanella-like salad—which, by the way, can be scaled up or down—to be your jumping-off point.

Alexandra (you can call her Ali) Stafford is best known for her popular food blog, Alexandra's Kitchen. You may also be familiar with her cookbook Bread Toast Crumbs, cooking tutorials at Alexandra's Kitchen, or her Instagram feed @AlexandraCooks featuring mostly simple, always seasonal, delicious dishes. She recently launched an online cooking class subscription series on Airsubs!

About ½ small loaf crusty bread (such as sourdough), cut into ¾-inch cubes

1 tablespoon vinegar (such as white balsamic, balsamic or red wine)

1. Make the magic peppers: Preheat the oven to 450°F. Cut each pepper in half through the core, and remove the seeds and stems. Cut each half into three or four pieces, then place the strips in a large bowl; season with salt and pepper to taste. Drizzle with the olive oil and toss to coat.

2. Arrange the peppers slices, cut side up, on a baking sheet. Roast until the peppers are tender and slightly browned on the edges, 25 to 30 minutes—thinner peppers will cook more quickly, so start checking at 25 minutes, if not sooner. The peppers can be used warm or at room temperature.

3. Make the salad: In a medium bowl, toss the bread cubes with olive oil, salt and pepper. In a large skillet over medium-low heat, fry the bread until golden, 8 to 10 minutes.