By PureWow Editors
••
Sponsored by 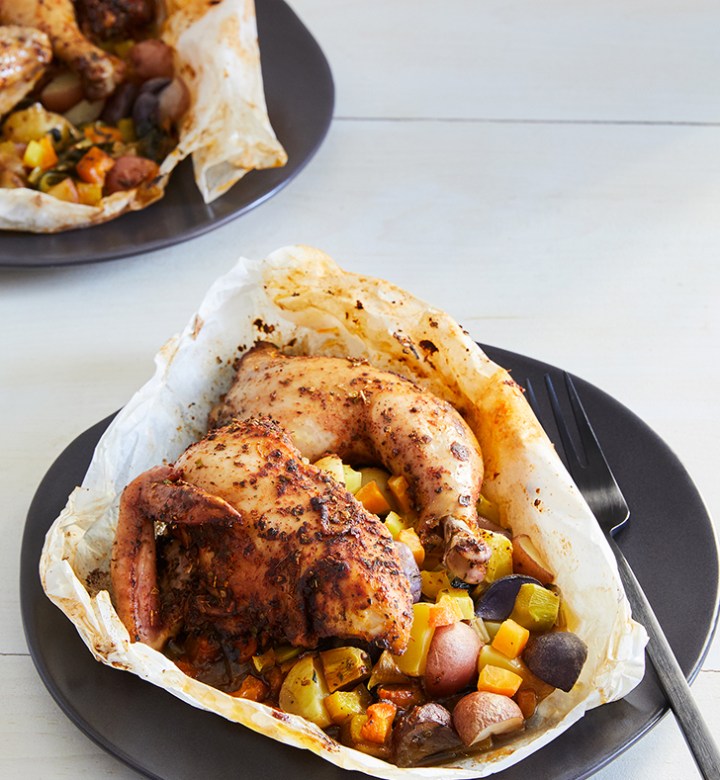 We won’t lie, this might be the easiest meal in the history of…ever. All you need to do is sauté some veggies, add everything to your folded parchment packets and pop ’em into the oven. That’s not even the best part. To serve, simply transfer the packets to plates, unwrap and voilà.

1. Preheat the oven to 375°F. Cut four pieces of parchment paper into 15-by-17-inch rectangles. Fold each piece in half (short sides together) to make a crease, then unfold and set aside.

2. Separate the chard leaves from the stems; chop the stems and leaves. In a large skillet, melt 2 tablespoons of the butter over medium heat. Add the leeks and chard stems and sauté until both are tender, about 4 minutes. Stir in the chard leaves and cook until they’re wilted, about 1 minute. Season with salt and pepper.

4. Season the Cornish hen quarters with the Italian herb blend, smoked paprika, salt and pepper. Dot the surface of each hen with the remaining 2 tablespoons butter. Place two pieces of hen on top of each of the vegetable beds.

5. Fold the other half of the parchment paper over the Cornish hens and then fold the sides inward, pleating several times to fully seal the package closed in a half-circle shape.

6. Transfer the parchment packets to two baking sheets and bake until the packets have puffed up and an instant-read thermometer inserted into the thickest part of the hen reaches 180°F, 45 to 50 minutes.

7. To serve, transfer the parchment packets to plates and unwrap.