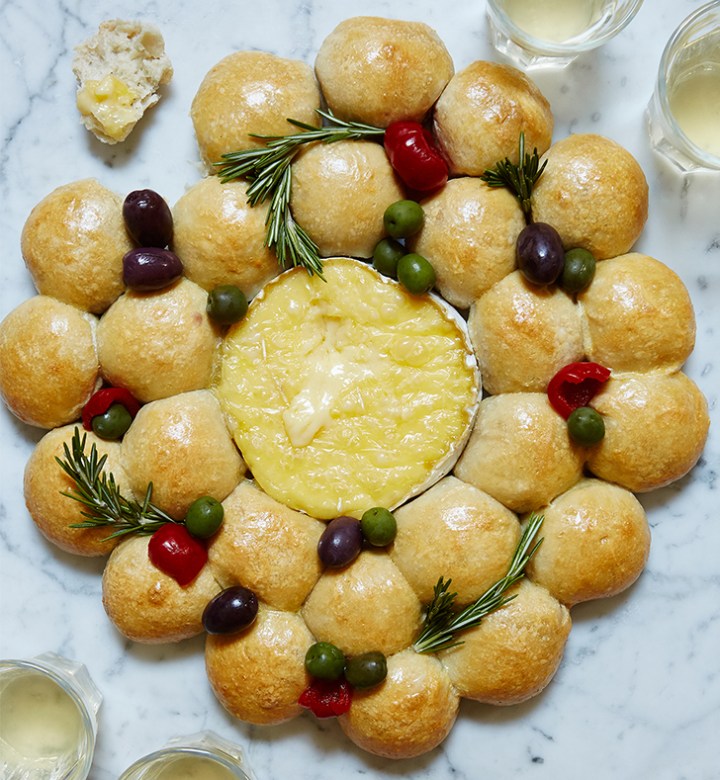 You’ve probably indulged in baked Brie at party at some point in your life. Because a wheel of cheese baked in dough is hard to resist, amiright? Well, in this recipe, we take that idea and turn it into an impressive holiday wreath. The best part (aside from eating it) is that you only need store-bought ingredients.

One 8-ounce wheel of Brie

Rosemary sprigs, as needed for garnish

1. Line a baking sheet with parchment paper. Using the box the cheese came in (or just the wrapped cheese itself), trace a circle the size of the cheese in the center of the parchment. Turn the parchment over so you can still see the tracing but the ink or pencil marks won’t touch the food.

2. Divide each ball of dough into 8 even pieces (about 2 ounces each), for a total of 24 pieces. Roll each piece into a tight ball.

3. Arrange 9 or 10 balls of dough around the traced circle on the parchment. Place them about ½ inch from the traced line and leave ¾ inch between each roll (the dough will expand to fill the gaps when it rises).

4. Make a second circle with the remaining dough balls, nestling them around the first circle and leaving about ¾ inch space between.

5. Cover the dough with damp paper towels and let rise until the dough balls are about double in size, 45 minutes to 1 hour. Preheat the oven to 400°F.

6. In a small bowl, whisk the egg with 1 tablespoon water to combine. Brush each roll with the egg wash, then transfer the baking sheet to the oven and bake until the rolls are lightly golden brown, 15 to 20 minutes.

7. While the bread bakes, cut the top rind off the Brie, exposing the creamy middle. When the rolls are lightly golden brown, remove the baking sheet from the oven and place the cheese in the center of the wreath.

8. Return the baking sheet to the oven and continue to bake until the rolls are deeply golden and the cheese is bubbly, 10 to 12 minutes more.

9. Let the wreath cool for about 5 minutes before serving, garnished with the rosemary, olives and pickled peppers.