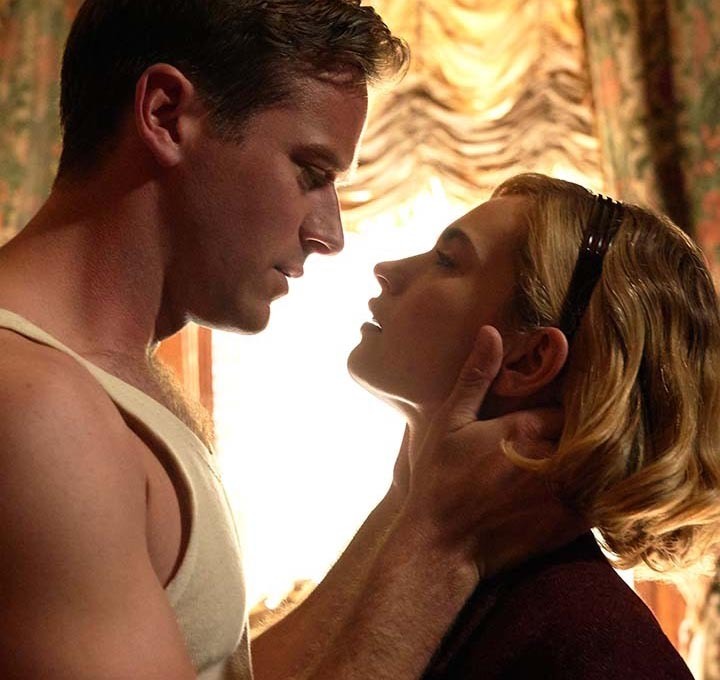 For weeks I was excited about watching the new Netflix movie Rebecca, starring winsome Lily James and hunky Armie Hammer. With a preview showing the two hyper-attractive stars swanning around beautiful European vistas and sumptuously appointed drawing rooms, I was anticipating some of the sexy feels of Call Me By Your Name, because yes Armie Hammer was in both and also, if you squint, Lily James has Timothée Chalamet's figure.

But then days before the flick premiered, a torrent of hot air from critics flattened my enthusiasm as wholly as the mistral blows through the French Riviera setting where the film opens. Vulture said it's a "hollow, turgid retread" of its source material, a bestselling 1935 novel by Daphne du Maurier (which was already adapted into an Academy Award-winning film, 1the 1940 classic directed by Alfred Hitchcock). Even meh reviews found something to carp about: writing in the New York Times, A.O. Scott said this telling lacks the novel's "subtextual kink."

Well, all of you hyperventilating haters can just catch your breath. I am a 21st-century binge-watching woman who has never read Rebecca the novel, seen Rebecca the Hitchcock film, heard Orson Welles's radio play or experienced any of the apparently scores of treatments of this story. And I enjoyed the film as a pleasant and mildly suspenseful two hours in the middle of a pandemic. (Pandemic entertainment grade inflation is real, and who am I to poo-poo the grading curve?)

At the beginning of the film, our wan little heroine, played by James, is catering to the needs of her snobbish American boss. James's character is so wan she is never given a name, but we're wholly on her side, as she tries to navigate the confusing rituals of the upscale hotel where they're staying. After her snobbish boss tries to curry favor with an indifferent fellow guest, our hero Max de Winter (Hammer), the boss becomes bedridden with an unspecified plot point. Which is convenient for our girl James, as then she's free to accept invitations from Max to go on concurrent day trips. (I am going to refer to the characters as James and Max henceforth, in the interest of keeping the wish fulfillment of the same-sex coupling heat of Call Me By Your Name alive.)

Frankly, this is my favorite part of the film, because the two pose in front of lush gardens, on a gorgeous Mediterranean terrace and in one scene, get busy on a beach. Sadly, James's bitchy boss tells her she knows she's been running around Monte Carlo with the handsome rich guy who is out of her league. She says something like, and I'm paraphrasing here, We're leaving town tomorrow, you poor little match girl, and you'll never see widower Max again!

As James's snobbish boss wouldn't shut up about earlier, Max is a widower, whose beloved wife Rebecca died a year before, and he owns one of the most resplendent country homes in all of England. After a proposal in which he calls her "a little idiot," Max marries James (which is one way to get out of a bad job), brings his bride back to the house. It's called Manderley, and at this point, the movie becomes a fish-out-of-water tale, with young, unsophisticated James drowning in the fancy and custom-clotted ways of the house, led by a severe head of household called Mrs. Danvers.

While watching Mrs. Danvers, I kept thinking of Horst's picture of Babe Paley, since both were elegant, cold-looking women who you wouldn't want to cross. Danvers is played by Kristin Scott Thomas. As I watched her roll her eyes, lift her chin and throw dark glances toward James, I remembered this woman won the Academy Award for 1997's The English Patient. And now she's acting like a live-action Cruella de Vil 2.0 (which, once you settle into her mannered performance, is pretty entertaining).

During the entire middle of the film, James bounces from the gardener to her housemaid to her sister-in-law asking about Rebecca. She's told that her predecessor was the most beautiful, alluring and charming woman to have ever set foot on this countryside estate (so much for English tact) and that her husband's been brooding and sick since Rebecca perished last year. In a shipwreck. Right off the coast of Manderley. How can James ever hope to measure up?

That's the crux of the tale, which if you scratch the story's surface, is really more about women's roles in the world than it is any one woman. Sexual license, societal status and familial duty in the 1930's—among the white, landed jet set—is explored throughout, ending with a convoluted courtroom drama. Thankfully, our sweet unnamed heroine James seems to wake up, as an active plot participant, in a splashy third act.

And not least, the clothes are as noteworthy as the surroundings in Rebecca. For example, the film's costume designer dresses Max in a yellow suit at the beginning of the movie, when he's the shiny trophy that James is lucky enough to win. Toward the close of the movie, after a reversal of fortune or two, James dons a yellow suit of her own. It's a wild ride our unnamed heroine is on—but following along, we get to take in some pretty great scenery along the way.