Her Friends Were At the Highland Park Parade. First She Cried, Then She Sprang Into Action 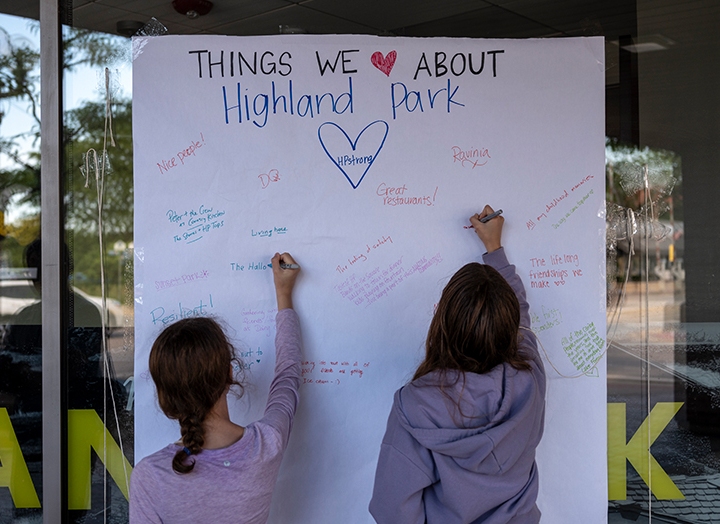 She was at a Fourth of July parade in a neighboring town when her sister got a call from a friend in Highland Park. There was a shooting. Standing amid the cheers and celebration at a similar parade a few miles away, Kitty Brandtner, mom of three young children, couldn’t digest the news immediately. It was uncanny, like she was in a parallel universe or something. She had just been talking to her husband about looking into Toronto after the horrors of Uvalde. And now, the monster she feared had paid a visit too close to home.

She cried for 24 hours, thought about Canada again, but her husband said they can’t just run from their home, their community. “Then what can we do?” she asked him, herself, anyone who would listen.

That night, she posted to Instagram that she would be going to D.C. Who would join? She woke to hundreds of responses. She’d never organized before, so she started by building a list. Suddenly, she had an organization, March Fourth, and a leadership team of 60-plus volunteers who could lead committees for public relations, event planning, lobbyists, fundraising, government and survivor liaisons. As of publication, they’ve raised a two-thirds of their $300,000 GoFundMe goal to cover costs of travel, lodging and meals for gun violence survivors from Highland Park, Uvalde and Parkland to meet with government officials and then peacefully protest the following day, where hundreds (and counting) will join them in their plea to federally ban assault weapons.

When I spoke with Brandtner, I asked what her strategy was. As a North Shore community member myself, my grief at the July 4th parade’s direct impact has only been compounded by the psychic torture of knowing nothing will change. They’ve won, these people who, for reasons I will never understand, believe their “freedom” to own and operate weapons of war is more valuable than life itself, unless said life is unborn. A friend in Highland Park told me she got into a quarrel with a man who reportedly told a group regarding the shooting, “Well, it could’ve been anything!” “It” being the assault rifle that killed seven, including both parents of a 2-year-old boy, and left more than 45 wounded, including an 8-year-old boy who is now paralyzed below the waist.

But unlike me, Brandtner hasn’t rolled over. She has thick skin from a career in sales, “I’ve been told ‘no’ a lot. Nothing is a no. Everything’s negotiable. We’re done taking no for an answer.”

On Sunday, two days before the events begin in D.C., six days since the shooting, Brandtner, who’s been posting updates about the March Fourth rally on Instagram, is uplifted as she talks to camera: “Good morning, incredible human beings,” she smiles. As many in the North Shore of Chicago feel, the outpouring of community support and strength is the glimmer of goodness amid the horror. I can tell by her smile that this activism will bring healing. She’s new to organizing, but she’s spoken with gun control activists like Fred Guttenberg, whose daughter was murdered in 2018’s Parkland shooting. Guttenberg warned her of the nature of these things—there’s the outpouring of support, and then things die down. Brandtner says she’s prepared to keep going. She knows how to rally, and she’ll do it again.

And the reality is, Brandtner and March Fourth will have to. We are a nation that barely had time to process the Uvalde shooting at Robb Elementary which left 18 children and three adults dead in a classroom. Before that, ten people were murdered grocery shopping in Buffalo. Every single day in this country, the free-for-all of guns escalates what would be a bad day into the worst day of someone’s life, possibly their last. On July 4, 2022 alone, Highland Park wasn’t the only travesty in Chicago. Per the New York Times: “As of early Monday morning, at least 57 people had been shot in Chicago over the Fourth of July weekend, nine of them fatally, according to NBC Chicago. That did not include the toll from the Highland Park shooting outside the city.” Nationwide, there are too many for this report to even include all of them in detail. According to The Gun Violence Archive, in 2022, a year in which we are only halfway through, the U.S. has seen more than 300 mass shootings. We are not a United States, we are a shell-shocked state.

I am a mother, too. And I’m scared. I lay awake at night thinking of my loved ones laying awake at night too, knowing our thoughts are all circling the same dark hole. As a writer, I can write about it. Brandtner, and her 60-plus March Fourth volunteers are doers, and they believe we can do something about it. I hope they are right.

How you can help: