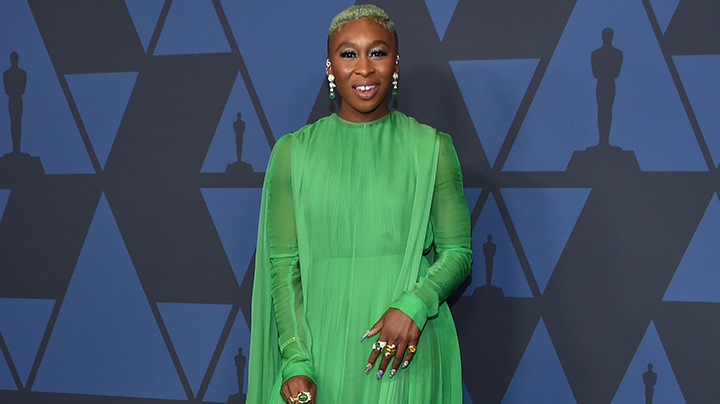 The Oscars are, of course, a big night for anyone with a nomination, but the stakes are particularly high for Cynthia Erivo. By the end of the night, Erivo may be able to call herself an EGOT winner. But not just any EGOT winner—if Erivo wins an Oscar in 2020 she will officially be both the youngest person to ever do so and the person who earned the elite title faster than anyone in history.

EGOT winners are those who have been awarded an Emmy, a Grammy, an Oscar and a Tony and as of February 2020, there are only 15 people in history to win all four. Erivo won her Tony in 2016 for her stage performance in The Color Purple, and both her Emmy and Grammy for a TV production of the same musical. All that's left for her to win is an Oscar, and tonight might just be her night. She's nominated for Best Actress for playing Harriet Tubman in Harriet and for Best Original Song for her recording of "Stand Out," which is the title song of the film.

If Erivo wins an Oscar tonight, it will have taken her just four years to acquire all four awards. Both of those records are currently held by composer Robert Lopez, who took 10 years and was 39 years old when he won his final piece of the EGOT, an Oscar for "Let It Go" from Frozen. He's also the only person to achieve an EGOT twice, meaning he's won at least two of each award (NBD).

You might recall in 2018 when John Legend's Emmy Award for his role in Jesus Christ Superstar made him an EGOT winner (much to his wife Chrissy Teigan's chagrin). That year also saw composer/producer Andrew Lloyd Weber (aka the creator of Cats) and lyricist/producer Tim Rice become accomplish EGOT status. The first woman of color to join the ranks of the EGOT winners was the actress Rita Moreno in 1977 and the first African American woman was Whoppi Goldberg in 2002. So needless to say, Erivo would be in some pretty excellent company.

Renée Zellweger may be considered the favorite to win Best Actress for playing Judy Garland in Judy (clearly, Hollywood loves Hollywood), but our fingers are still crossed for Erivo and a potentially history-making win.