When it comes to fashion rockstars, Kristen Stewart comfortably takes one of the top spots as an actress who has truly found her stride. Like many millennials her age, K-Stew has far outgrown her days of pairing Chuck Taylors with minidresses (Google her very 2009 MTV Movie Awards look) and has completely leaned into being a high fashion darling. Case in point: Her breathtaking ensemble at the Cannes Film Festival yesterday.

The 32-year-old actress pulled up in a chic tweed Chanel suit that had us awestruck. While the look would've been breathtaking as is—it's Chanel after all—Stewart managed to give it an even edgier feel by unbuttoning the top half of the tailored-to-perfection blazer and showing some serious skin. Iconic.

But that wasn't all. Adding a hint of masculinity and breaking up the matchy ensemble were her matte black chunky leather boots, courtesy of Casadei. The actress also rocked a pair of silver-rimmed, yellow-tinted sunglasses and wore her deliberately messy hair in a side part (because millennials are gonna millennial). 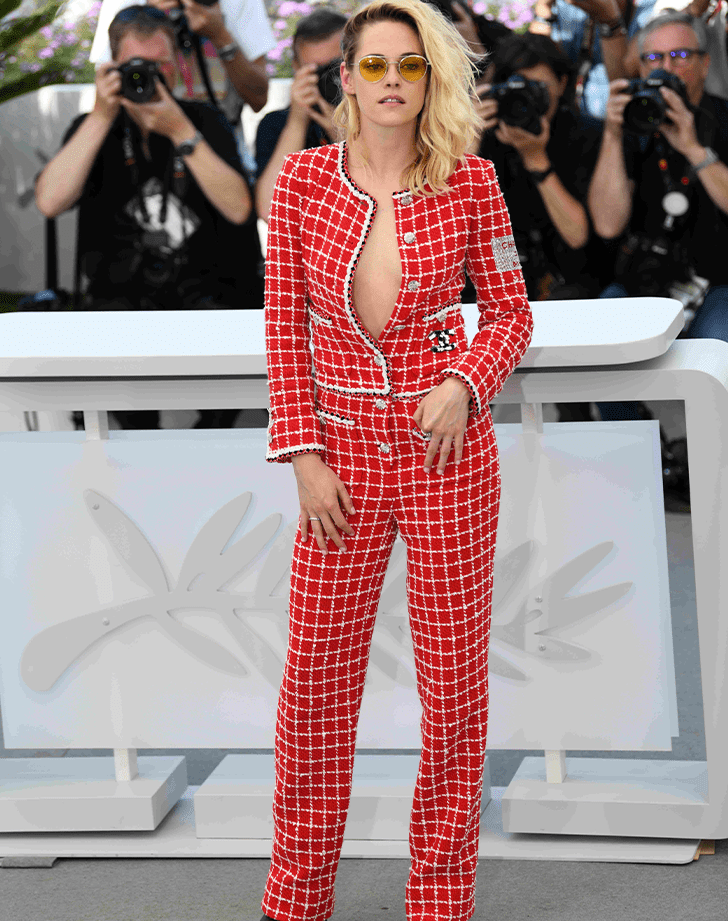 Stewart was attending a photocall for her film, ﻿Crimes Of The Future, ﻿which debuted at the festival and co-stars Viggo Mortensen and Lea Seydoux. The horror film follows a world-renowned performance artist couple who are under major scrutiny for publicly showcasing the metamorphosis of organs onstage.