18 Yoga Poses for Kids, and Why You Should Start Them Early

You might think that kids and yoga just don’t mix. After all, your practice is designed to bring a sense of calm and restfulness to your daily life. Your kids, on the other hand, not so much. But even the most rambunctious child can benefit from yogic principles including mindfulness. And by starting them off at a young age, your kids will be able to incorporate yoga into lifelong healthy habits and grow their practice as they grow up.

Why Kids Should Start Yoga Early

According to a 2012 survey, 3 percent of U.S. children (which equals about 1.7 million) were doing yoga. And with more and more schools adding it into their phys ed programs, yoga’s popularity among kids will continue to rise. That’s because studies have shown that it can improve balance, strength, endurance and aerobic capacity in school-age kids. There are psychological benefits as well. Yoga can improve focus, memory, self-esteem, academic performance and classroom behavior, along with reducing anxiety and stress. Plus, researchers have found that it helps lessen symptoms such as hyperactivity and impulsivity in kids with attention deficit hyperactivity disorder.

Yoga poses for kids are a lot like yoga for adults, but basically…more fun. When starting out, the goal is to introduce them to movement and focus on creativity rather than mastering perfectly aligned positions. Once you’ve got them hooked on some poses, you can then begin to add in breathing and meditation exercises along the way. To get started, here are some simple, kid-friendly yoga poses to try with your little one. 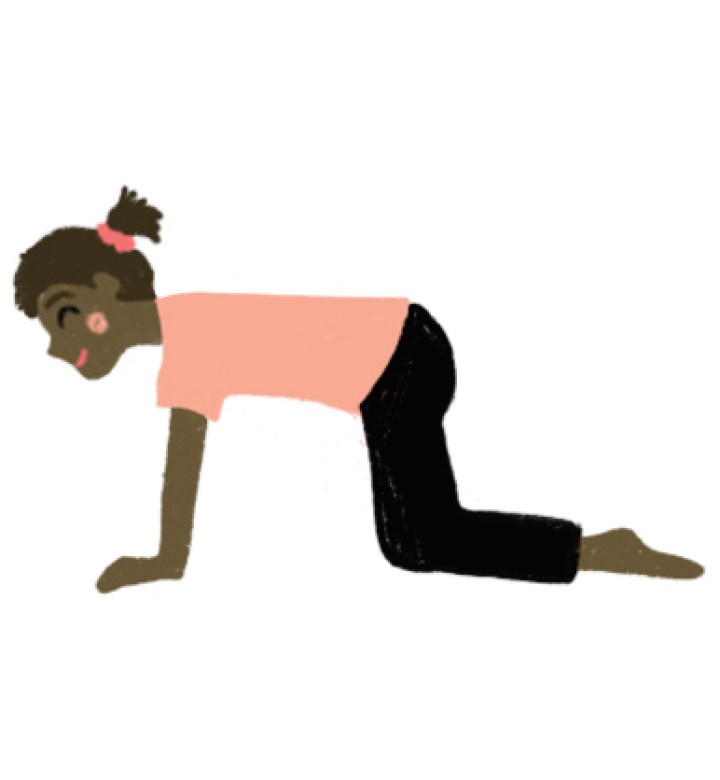 This is the starting position for many other poses such as cat and cow. Resting on your hands and knees, bring knees hip width apart (the feet should be in line with the knees, not splayed out). Palms should be directly under the shoulders with the fingers facing forward; back is flat. 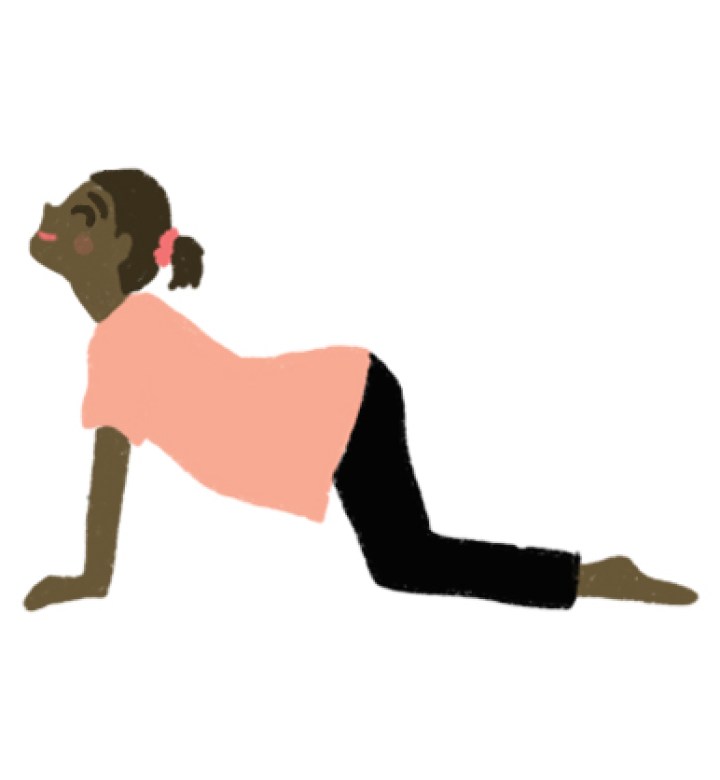 For cat pose, while in the tabletop position, round the back and tuck the chin into the chest. For cow, sink the belly toward the floor and arch the back, looking up. Feel free to alternate between the two poses. (Meowing and mooing are optional, but strongly encouraged.) These are typically used as warm-up exercises for the spine. 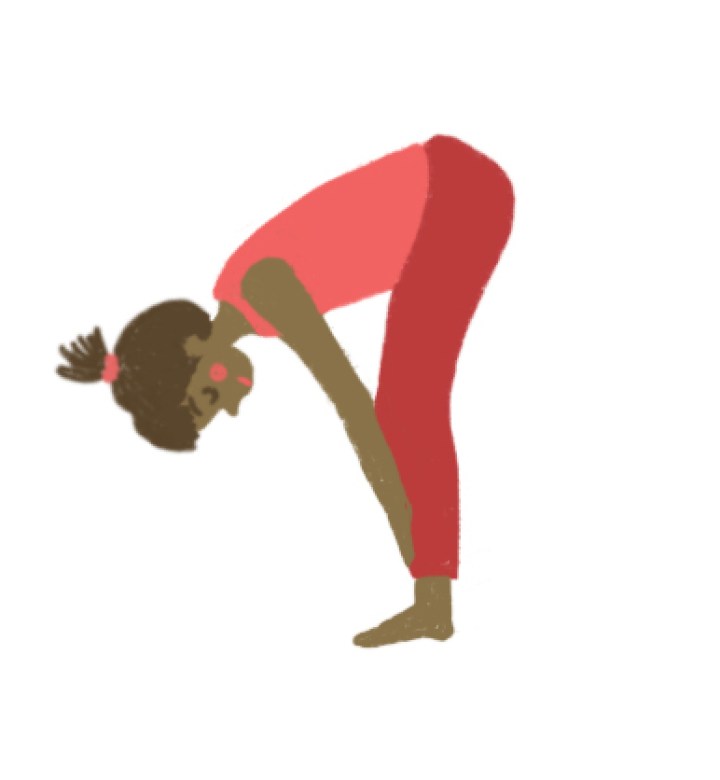 See if your child can grab their ankles by bending forward at the waist. They can also bend their knees to make it easier. This helps stretch the hamstrings, calves and hips and strengthen the thighs and knees. 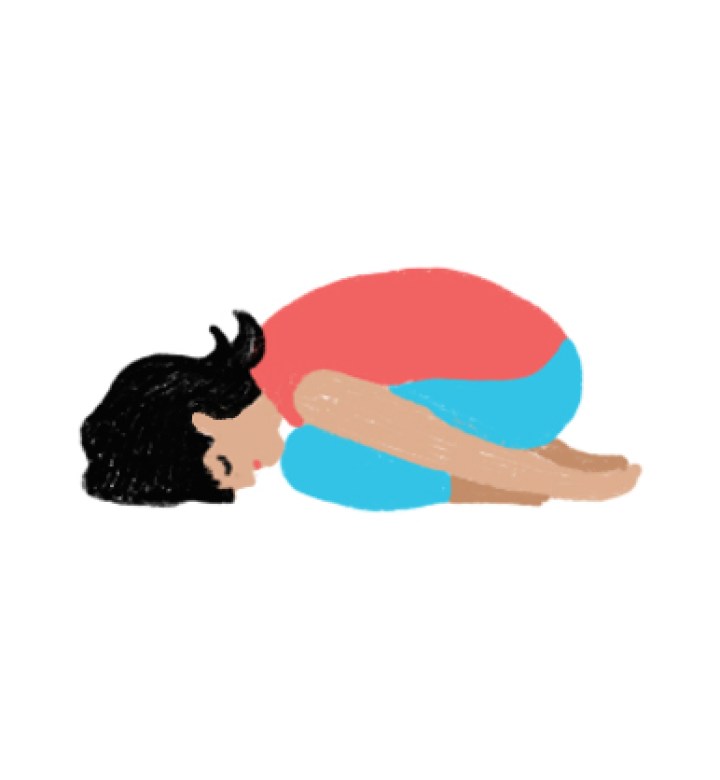 For this appropriately named pose, sit back on the heels and slowly bring the forehead down in front of the knees. Rest the arms alongside the body. This peaceful pose gently stretches the hips and thighs and helps calm your kid’s mind. 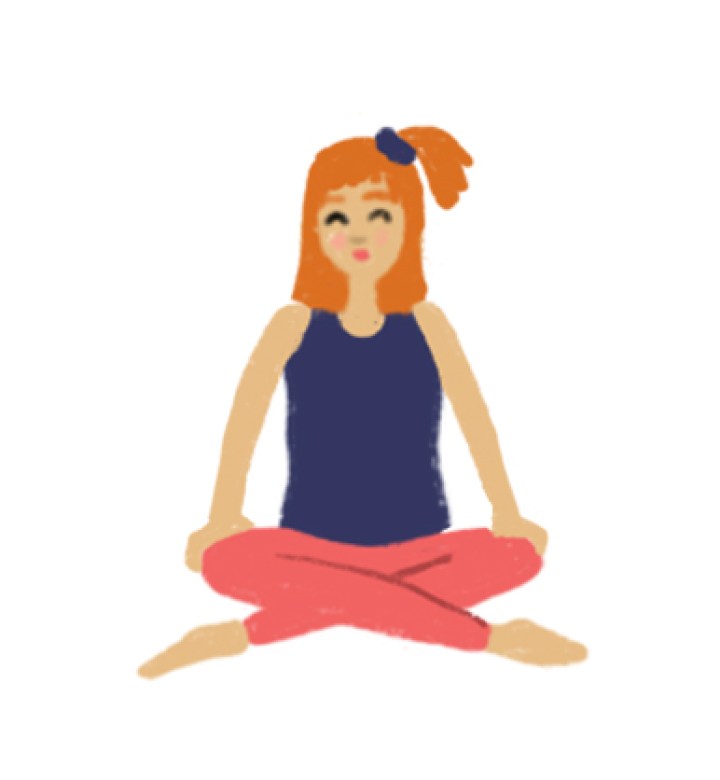 Sit cross-legged and rest hands on the knees. If your child is having a hard time sitting flat, prop them up on a folded blanket or place a pillow under their hips. This pose helps strengthen the back and calm them down. 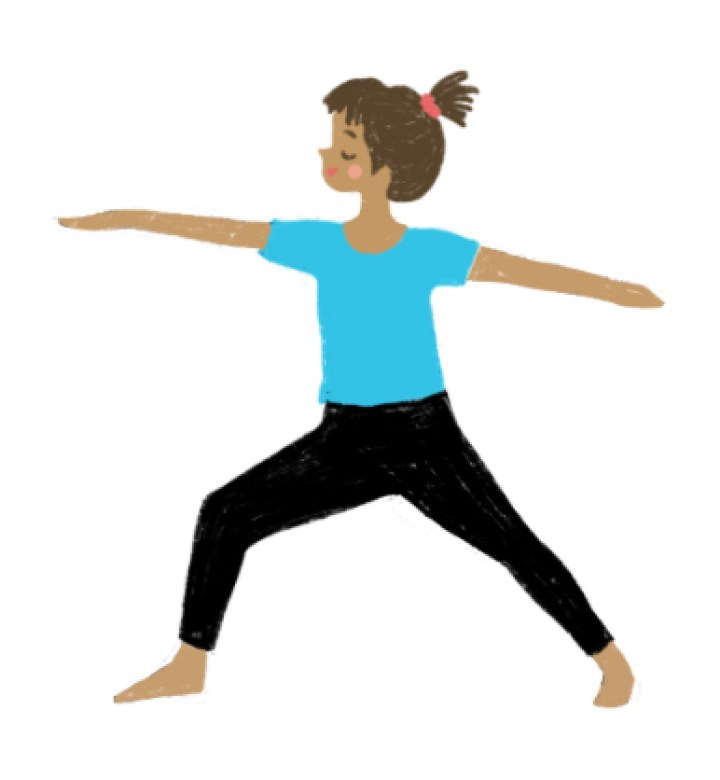 From a standing position (that’s mountain pose for you yogis), step one foot back and turn it so the toes are facing slightly outwards. Then raise the arms up, parallel to the floor (one arm in front, the other toward the back). Bend the front knee and look forward over the fingers. Reverse the feet and do it again on the other side. This pose helps strengthen and stretch your kid’s legs and ankles, as well as help increase their stamina. 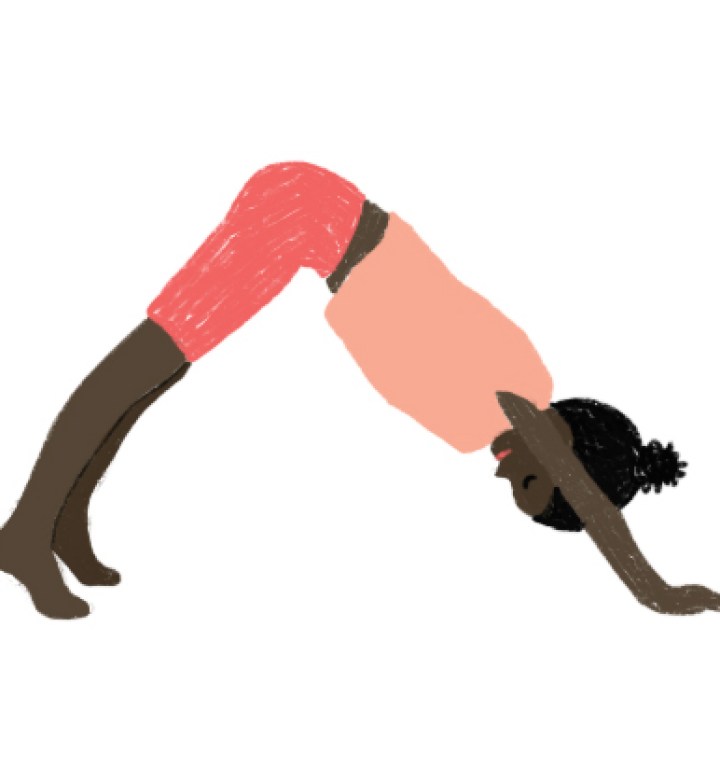 This is one of the easiest poses for your child to mimic and probably one they’ve already done naturally. They can either enter this pose by rising up from their hands and knees or by bending forward and placing their palms on the ground, then stepping back to create an upside-down V shape with their butts in the air. In addition to stretching, this pose also energizes them. Plus, they’ll get a kick out of the upside-down view. 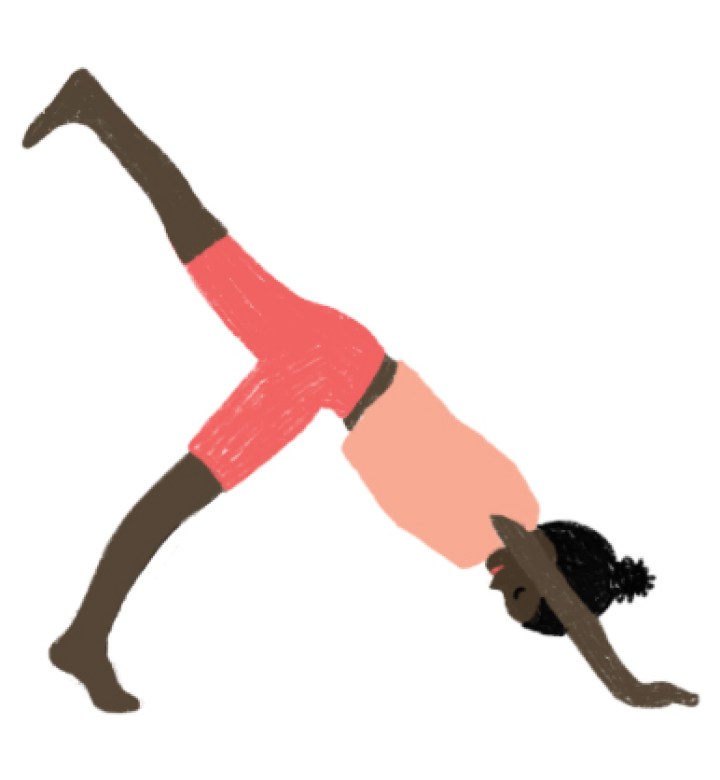 Also called one-legged down dog, this is a variation of downward-facing dog but with one leg extended up. It will help strengthen their arms and help your child develop better balance. 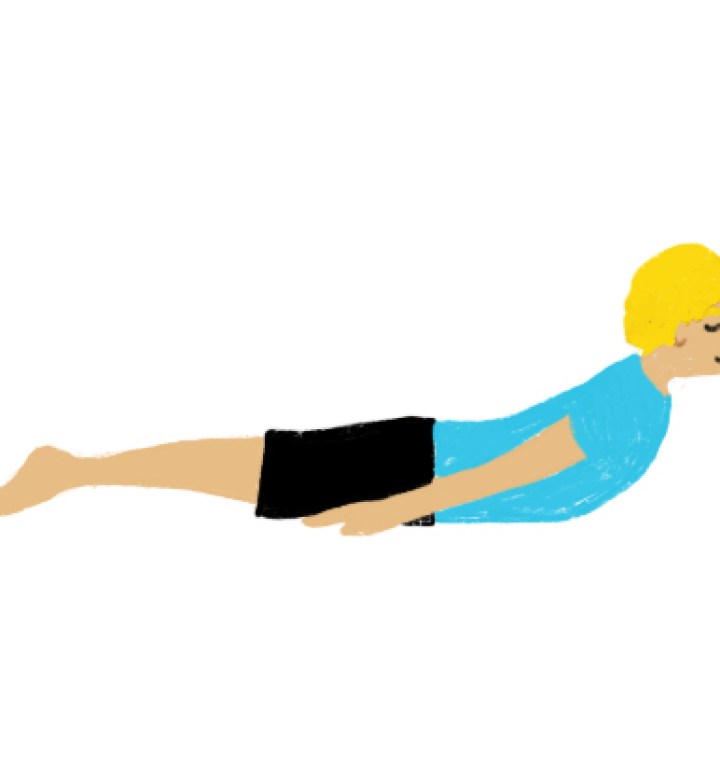 Lie on your belly and lift your chest by squeezing your shoulder blades together as much as possible while extending your arms behind the body and lifting them up slightly. To make it easier, your child can keep their arms down alongside their body and push off with their palms to lift their chest up. This helps improve their posture. 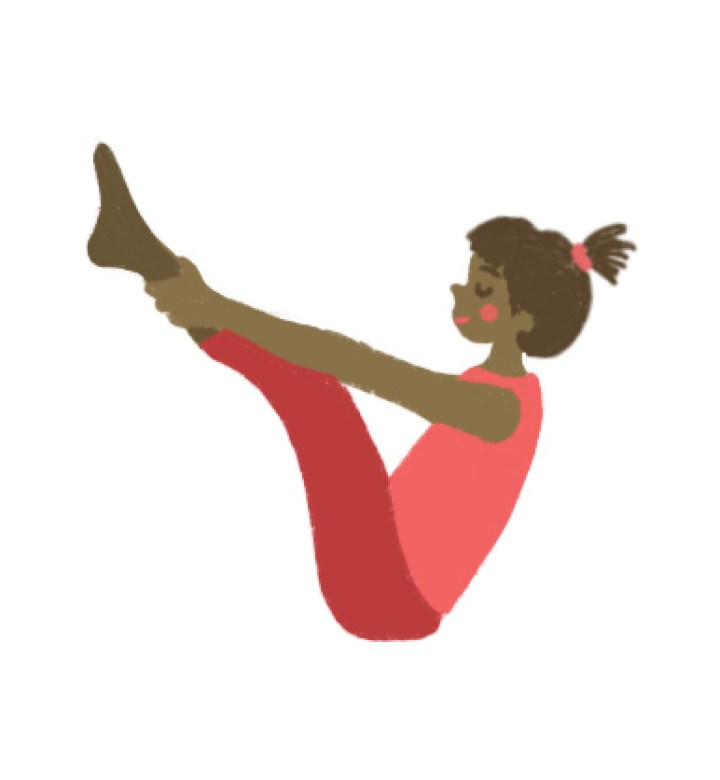 Balance on your butt with your legs extended out and up (knees can be bent to make it easier) and arms stretched out in front. This pose strengthens the abs and spine. 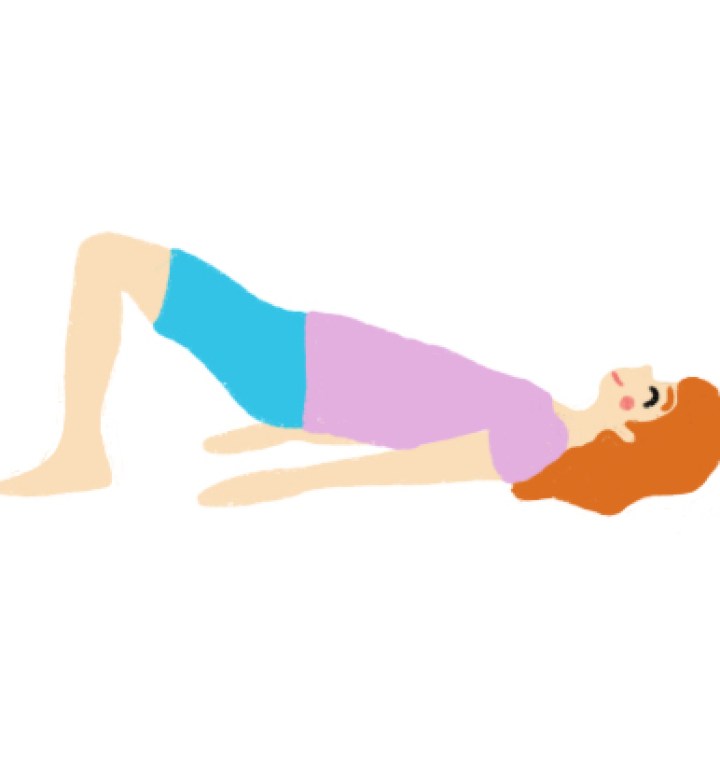 Lie on your back with knees bent and feet flat on the floor. Rest arms alongside the body and lift the butt and back off the floor, creating a bridge, while tucking chin into chest. If your kid is having trouble lifting their pelvis off the floor, slide a bolster (or a pillow) under them to rest on. This pose stretches the shoulders, thighs, hips and chest and increases flexibility in the spine. 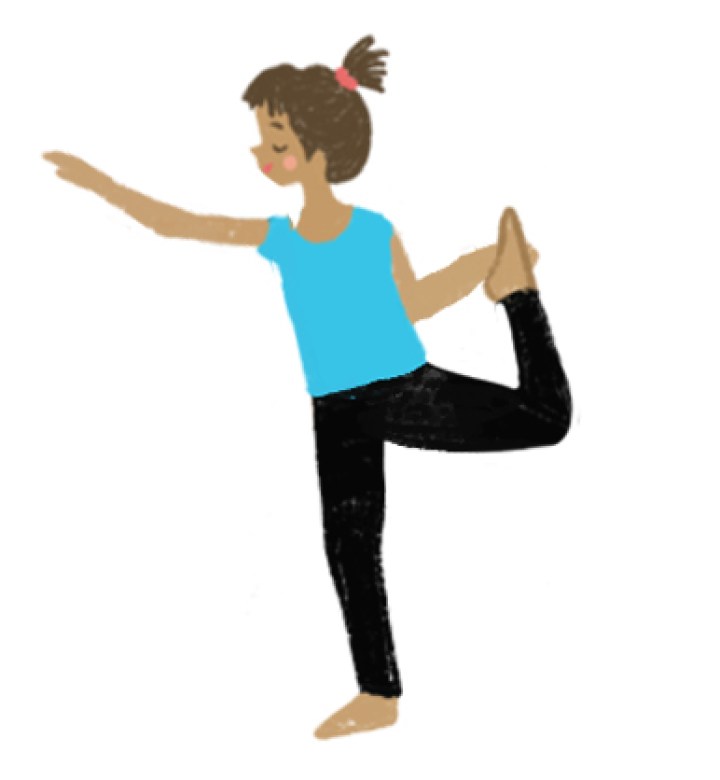 Stand on one leg, stretching the opposite leg out behind you. Reach back and grab the outside of the foot or ankle and bend forward at the waist, using the other arm out in front for balance. Try to arch the leg up behind you. This pose helps improve a child’s balance. 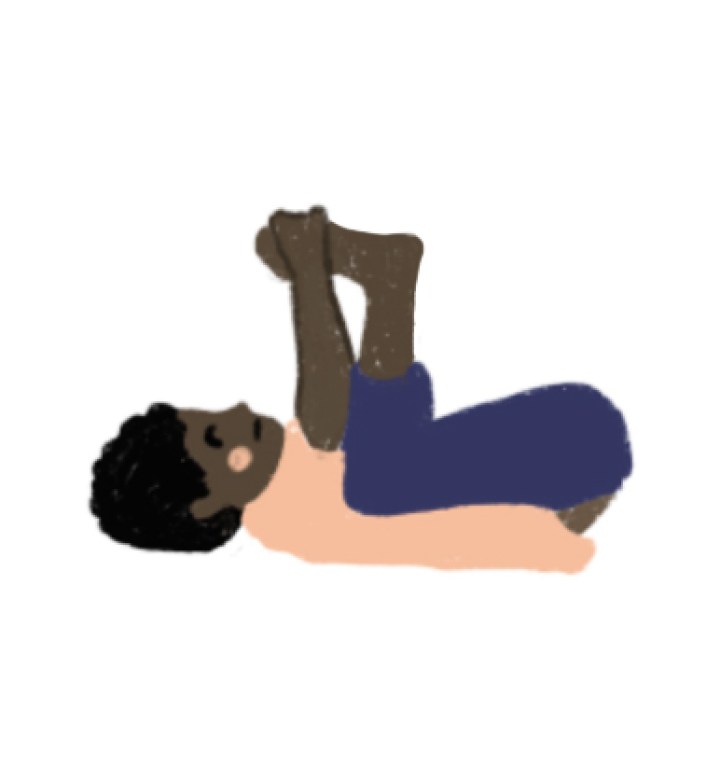 Lie on your back and hug your knees into your chest. Grab the outer part of your feet with both hands and rock side to side like a baby. This pose seems silly, but is remarkably calming. 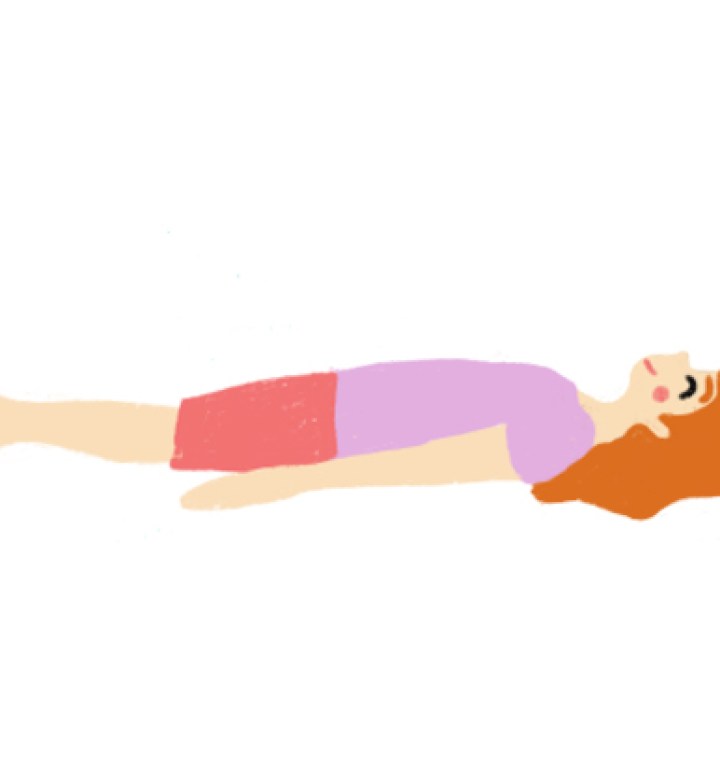 Since you don’t want to spook your kids, you might want to refer to this as the resting pose instead. Lie on your back with arms and legs stretched out and breathe. Try to remain in this pose with your child for five minutes (if you can). Keep a blanket handy in case your child gets cold. This helps your child relax and calm themselves. 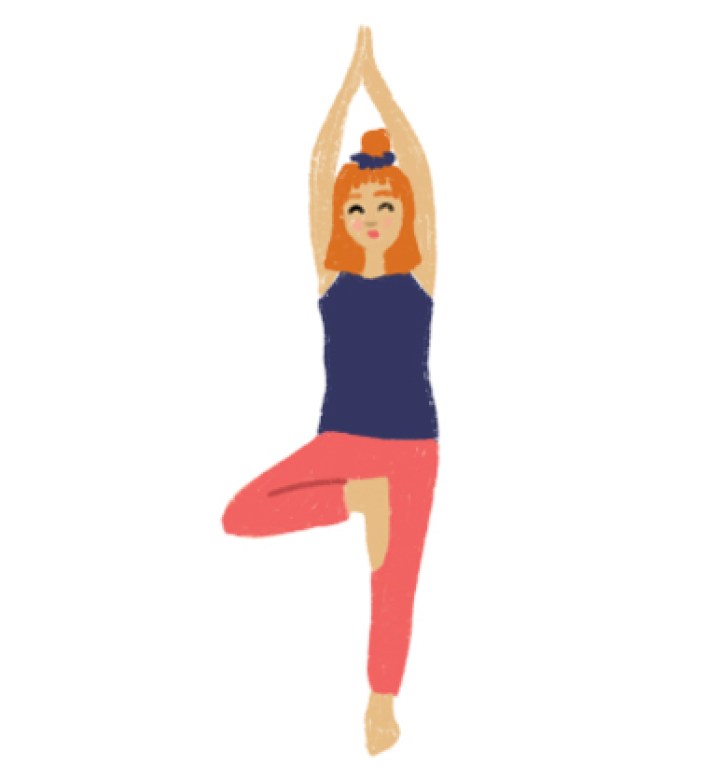 While standing on one leg, bend the other knee and place the sole of the foot on your inner thigh (or on the inside of the calf if that’s easier). Your child can also raise their arms into the air and sway like a tree. This pose improves balance and strengthens their core. If your child is unsteady, allow them to stand against a wall for support. 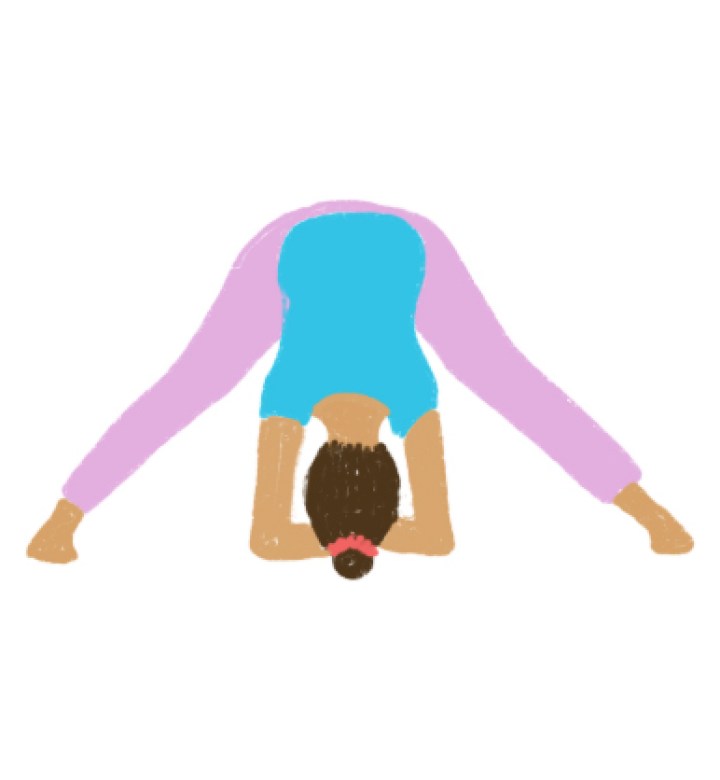 Step feet wide apart. With hands on the hips, fold over the legs and place hands flat on the floor, shoulder-width apart. Kids are generally pretty stretchy and can bring their head toward the floor in between their legs. This pose stretches the hamstrings, calves and hips. Plus, because it’s a mild inversion (the head and heart are below the hips), it offers a feeling of calmness too. 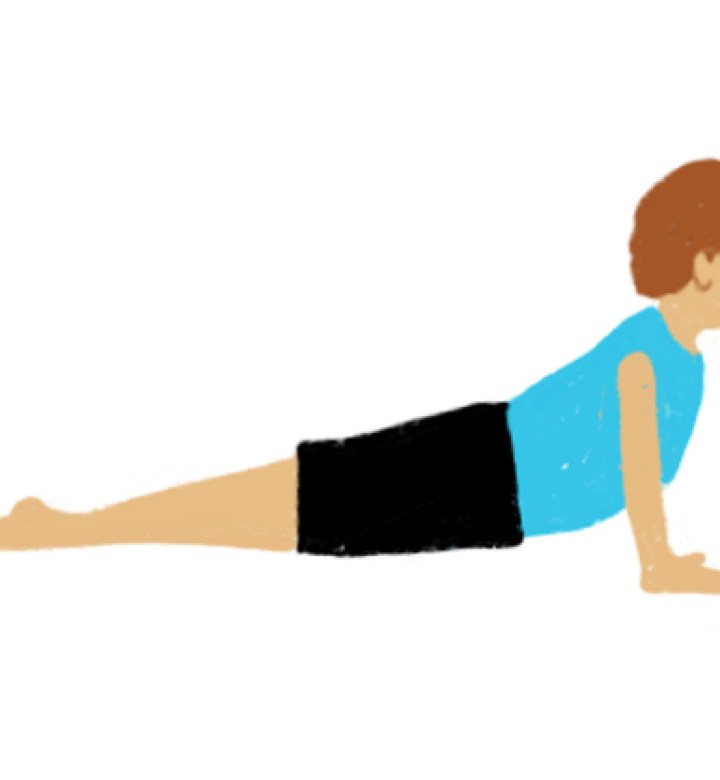 Lie on your belly and place palms flat next to your shoulders. Press and lift your head and shoulders off the floor. This is a good way to strengthen the spine and stretch the chest, shoulders and abs. 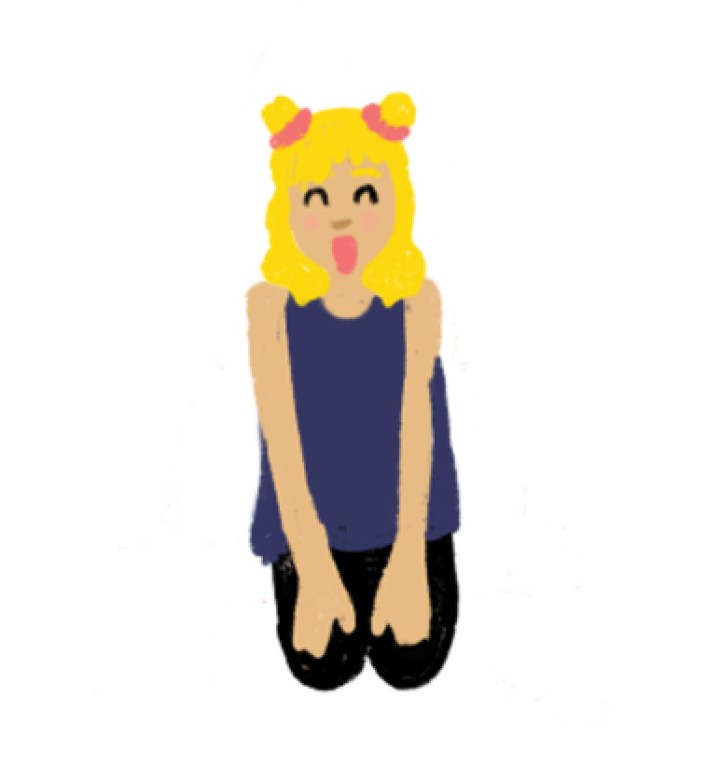 For this pose, either sit with your hips on your heels or in a cross-legged pose. Rest the palms on the knees and take a deep inhale through the nose. Open your mouth and eyes wide and stick out your tongue. Then exhale through your mouth with a "ha" sound like a lion’s roar. Think of it a kinesthetic release for kids with lots of energy.

Are You Parenting a Dandelion, a Tulip or an Orchid?

family
by Alexia Dellner
I’m a Family Editor and This Is the Only Birthday Present I'm Gifting This Year
family
by Dana Dickey
39 Gifts for Girlfriends They’ll Love (And Love You for Gifting on Valentine's Day)
family
by Emma Singer
Share the Drop Is an App That Connects Breast Milk Donors to Recipients in Real Time
family
by PureWow Editors
Want a Unique Name for Your Baby? Here are 20 Names No One Else in Your Kid's Class Will Have
family
by Sarah Ashley
Should I Get a Dog? 7 Questions to Ask Yourself Before Bringing Home a Pup
family
by Emma Singer
I Love My Kids, But I Hate Playing With Them