What Parents Need to Know About RSV, According to Pediatricians 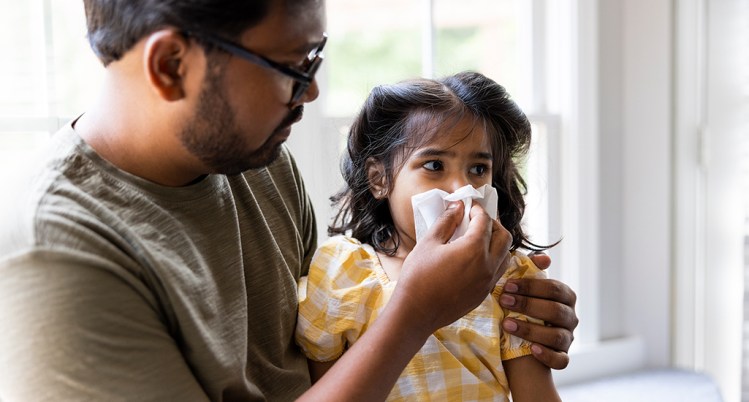 As temperatures drop, cases of runny noses and calls from the school nurse tend to rise. But this year, it seems like parents have more to worry about than the usual sniffles, with a high number of RSV (respiratory syncytial virus) cases being reported across the country, along with frightening media reports of RSV-related hospitalizations. But what is RSV, exactly? And how worried should parents be about the current surge? We spoke with the experts to find out.

What Are the Symptoms of RSV?

Typically, RSV causes cold-like symptoms. A child with RSV may have a clear runny nose (“that sometimes runs like a faucet,” per Dr. Scott) for the first 48 to 72 hours, and then later a cough. “The cough is usually a dry, nonproductive, raspy cough that is very frequent,” Dr. Scott adds. “It is common for a child to cough to the point of vomiting.” Fever is also a common symptom, as is a decrease in appetite. Some children will also develop bronchiolitis and/or pneumonia from RSV, which can cause other symptoms including wheezing, fast breathing and difficulty breathing. Symptoms peak at days five to seven and can last for two to three weeks.

How Do RSV Symptoms Differ from COVID-19?

“Many of the symptoms of RSV can mimic the symptoms of COVID-19, including sore throat, runny nose, fever and congestion,” says Dr. Bonat. If your child develops any of these symptoms, the expert stresses how important it is to test them for COVID-19. But the main difference between the two viruses is that RSV in infants and small children is more likely to cause wheezing and difficulty breathing compared to COVID-19.

Why Is There Such a Surge in RSV Cases Right Now?

Most kids catch RSV at some point before they turn 2, the US Centers for Disease Control (CDC) and Prevention says. And while the CDC does not keep a national count of RSV cases, hospitalization or deaths, it does track changes in the virus' spread. “We have observed a rise in RSV in multiple U.S. regions, and some regions are nearing seasonal peak levels,” a CDC spokesperson told NBC recently. According to experts, the reason behind the surge is because many children simply weren't exposed to respiratory viruses earlier in the pandemic due to masking and social distancing. This has created a so called “immunity gap.” (This also explains why the number of flu cases has also been increasing.)

What Can Parents Do If Their Child Has RSV?

There is no specific medicine for the treatment of RSV and most cases will resolve on their own within seven to 10 days. But there are some things parents can to do help relieve symptoms, including:

How Contagious Is RSV?

RSV is very contagious. It can spread through the droplets released into the air when someone coughs or sneezes, or by touching a contaminated surface like a table or doorknob (where it can live for hours). It can also spread through direct contact, like kissing and hugging. Per the CDC, people infected with RSV are typically contagious for three to eight days and may become contagious a day or two before they start showing signs of illness.

How Can Parents Protect Their Kids Against RSV?

“RSV is so prevalent in the fall and early winter it can be hard to avoid,” says Dr. Scott. But because it is transmitted by respiratory droplets, the experts say that parents should encourage kids to cover their mouths when coughing or sneezing and to practice good hand hygiene (including frequent hand washing and/or hand sanitizer use). Parents should also try to limit their children’s exposure to crowds and anyone with cold symptoms.

How Worried Should Parents Be About RSV Right Now?

“In most children, RSV is a mild and self-limiting illness,” explains Dr. Bonat. “However, infants and very young children (under 2 years) are at a higher risk of more severe illness with RSV infection. Parents should have their child seen by a healthcare professional if their child shows signs of difficult breathing including fast breathing, pulling hard to breath, flaring of the nostrils while breathing and wheezing. ”

Ask a Pediatrician: Is It OK to Send My Kid into School with a Cold?