This Is What Happens to Your Brain When You Hang Out with Dogs, According to Science 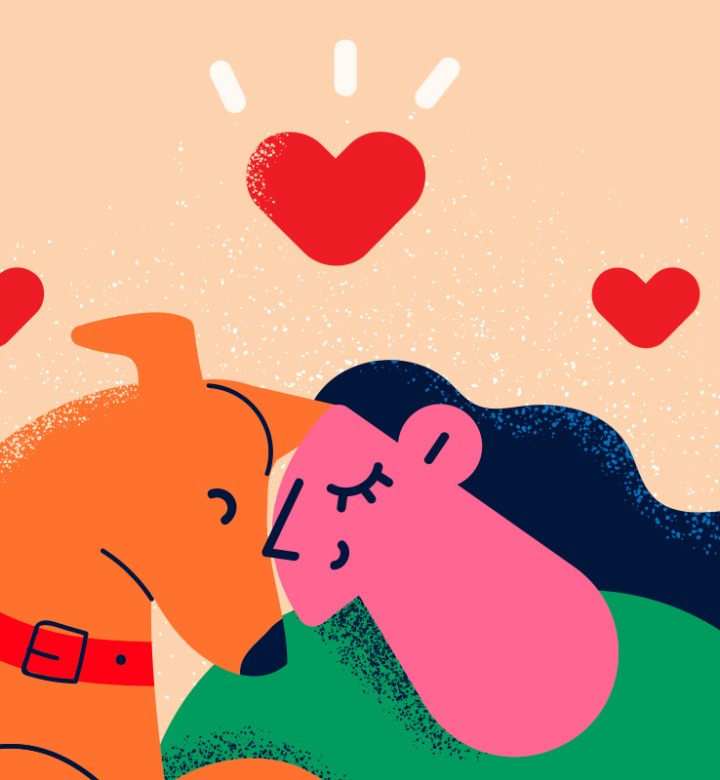 There’s a reason nonprofits enlist dogs to help kids read, ease PTSD in veterans and comfort people in crises. Actually, there are two big reasons: Hanging out with dogs is scientifically proven to raise oxytocin and improve cortisol levels in our brains. Everyone responds differently to these changes, but the evidence suggests dogs are very good for our mental health. Plus, they’re cute!

There are several studies that have tried to pinpoint exactly what happens in our brains when we see, pet and play with dogs. One 2015 study in Japan found that prolonged eye contact between a dog and its owner boosted oxytocin levels in humans by 300 percent (and in dogs by 130 percent!). In a different phase of the same study, according to Science.org, researchers gave nasal spray containing oxytocin to dogs before sending them out to play with their humans. The amount of time female dogs spent making eye contact with their owners increased by 150 percent (there was no difference in male dogs).

So, what does this mean for us? It means simply looking into your dog’s eyes can boost both of your oxytocin levels. The longer you hold that gaze, the bigger the boost.

What Happens When Oxytocin Levels Increase?

Oxytocin is the hormone responsible for loving feelings. Our brains produce it when we feel good, and it helps us better regulate all types of emotions. Most notably, oxytocin is released during childbirth to bond moms and babies. It’s linked to trust, empathy, sociability and positivity. People with depression usually have an oxytocin deficiency, which is why spending time with a dog can be so helpful! Since canines increase oxytocin levels, owning a dog can definitely alleviate symptoms of depression, anxiety or PTSD.

Another study from 2018 measured cortisol levels in military veterans who had been diagnosed with PTSD. Researchers found that the cortisol awakening response (CAR) in participants with service dogs was higher than those without dogs. This is actually a good thing! Higher CAR—measured right when you wake up—is linked to better handling of day-to-day stress. When it comes to cortisol levels in the moment, a 2017 study found cortisol decreased in humans when they spent time with their dogs. Other studies have reached similar results—especially after people spent time petting dogs.

Again, what does this mean? It means canine companions can directly affect the hormones in our brains that help us face the day, work through anxiety and react to daily stressors.

What Happens When Cortisol Levels Shift?

As mentioned above, an elevated CAR first thing in the morning improves our ability to get up and get going. Throughout the day, hanging out with your dog (whether that means cuddling, going for a walk or staring lovingly into each other’s eyes) keeps cortisol levels in check. Lower cortisol levels are associated with low blood pressure and reduced anxiety. The participants with dogs in the military veteran study reported feeling less angry and more rested than the dogless participants. In senior populations, dog ownership has been known to alleviate feelings of loneliness and low self-esteem, too.

Hanging out with dogs will affect every individual differently. However, based on the science, chances are an encounter with a dog will leave you feeling refreshed, positive and less anxious than before. Just ask the college students, children with autism, trial witnesses and regular people who can credit dogs with helping them through some tough times.

20 Affectionate Dog Breeds Because Puppy Love Is Just the Best