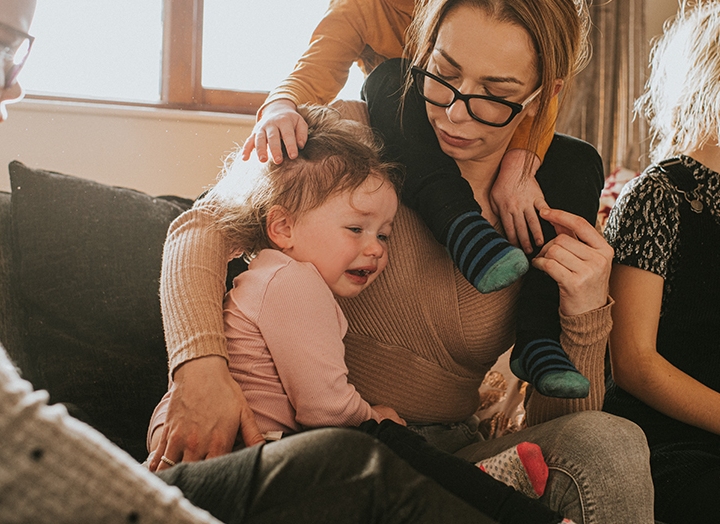 As a toddler mom who still vividly remembers the sleepless chaos of the early days, I was surprised to recently catch myself typing this line to a fellow new-parent: “Enjoy every moment.” (My right pinky immediately hit delete.)

Equal parts toxic and shaming, the phrase was one I used to loathe as a new mom. Enjoy every moment, someone would say while smiling ear-to-ear expectantly and doting on my newborn son. After all, how do you respond? “I will!” I’d usually offer. But that’s when I’d spiral: Was I enjoying every moment? The sleep deprivation? The hours lost to washing pump and bottle parts? How about the diaper changes or the sudden loss of self that happens practically overnight? Mainly, those three words left me feeling guilty whenever a negative thought creeped in.

Don’t get me wrong, I understand the sentiment: time moves fast, blink and you’ll miss that beautifully precious baby phase, yada yada. But I’d also be naïve to pass along that kind of pressure. All sunshine and rainbows? The first 12 months, heck parenthood in general, is most definitely not.

Other offenders include: “It goes by so fast!” or “You’ll miss it when it’s over!” Remarks like these can actually be quite triggering to new moms, says Chelsea Allison, CEO of Motherfigure, an organization that helps women navigate the radical transformation from pregnancy to parenthood.

“As a mom of two under three, I wish I could enjoy every moment, not just when it comes to parenting, but in life, but that’s just not reality,” she says. “The reality is that some moments—a lot of moments, especially in this past year—are really hard.” If fact, a new mother so often sits with insecurity, self-doubt, a load both mental and physical that, altogether, is way too much, Allison adds.

“The problem with remarks like these, however well-intended, is that they reinforce the idea that there is actually a right way to be a parent,” she says. “That it’s bliss for everyone, but you.”

So, what’s a better thing to say? Allison suggests an authentic connection over your shared bond instead. In other words, just be sincere. Instead of spouting off an unsolicited platitude, offer solidarity (“I remember how hard those days could be for me, and yet I missed my kids so much the second they were in bed”) or support (“I’m here for you if you have questions, large or small”). You could also just give a compliment. (“I know what a juggle this all is, you already look like a pro.”)

Ultimately, try to put yourself in that new parent’s shoes—and steer clear of anything that feels prescriptive.

The 4-Word Phrase Every Parent Needs to Hear

The 12 Best Dog Houses for Big, Small or, Yeah, Even Fancy Dogs