Stop Labeling Your Kid as Shy (and What to Say Instead) 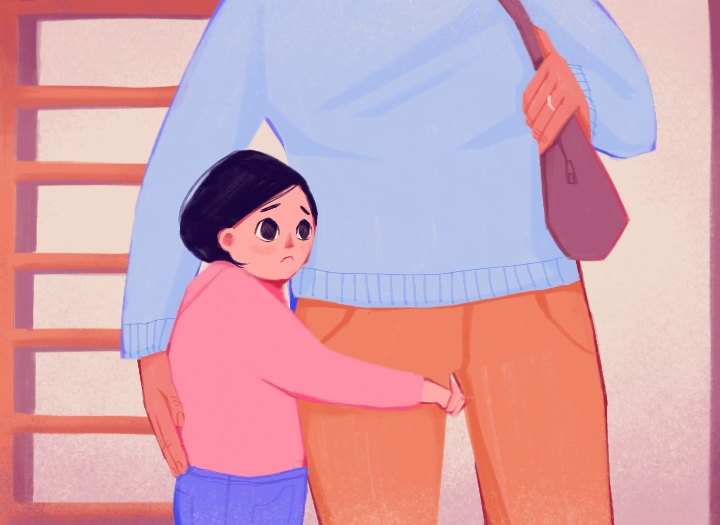 You’ve likely observed your kid experiencing shyness in a social situation—they act more reserved or timid in the company of a larger group or even one on one with a peer. That’s OK (shyness can be good!). But before you jump in with an explanation like “oh, she’s just shy,” consider this: Shyness is a feeling, not a personality trait, which means it’s something they’ll probably overcome. Labeling it can have the opposite effect, says Kristene Geering, content director at the Parent Lab. Here’s why.

Calling Your Kid Shy Can Unintentionally Box Them In

As parents, one of our top goals is to honor our children’s needs, but in doing that, we want to also be careful that we don’t label them in a way that’s problematic. Shyness is a prime example where this crops up. You’re at the playground and your child doesn’t warm up to the group immediately. Or she doesn’t rattle off the answer to a question when asked by a friend or grownup. “Saying, ‘Oh, she’s shy,’ might seem like a way to stick up for your kid and it comes from a caring place,” Geering says. “But when we do that, we’re telling our child what they are instead of how they’re feeling.”

It’s easy to feel concerned about your child hanging back or not seeming as outgoing as their peers, but as far as personality traits go, shyness is a positive attribute. Studies have shown that shy kids are better at focusing, more observant and cooperative, too.

What to Say Instead

When your toddler gets asked by the nice lady at the grocery store how old she is and immediately hides behind your legs, don’t immediately come to their defense by calling her out as shy. A better tactic: Try saying, ‘Oh, she doesn’t seem like she wants to talk right now. That’s OK. Let’s try another time.’”

Per Geering, it’s about labeling the feeling your kid is experiencing in the moment vs. labeling a big part of their identity. (“It’s the difference between saying, ‘You feel sad now,’ as opposed to ‘You are sad,’” Geering adds.)

Why this works: With shyness, try to focus on the temporary nature of their emotions instead of assigning a trait, Geering suggests. “If a child holds back, let them know that a) the way they’re feeling is normal, b) it might not last forever and c) they have more opportunities to share if they’re not up for it now,” she says. There are definitely some personality traits that lean more toward the shy or introverted side, Geering says, but by saying “you’re shy” vs. “you’re feeling shy right now,” you’re defining their experience as something more permanent when it might not be the norm.

We repeat, shyness is usually a temporary feeling and something kids ultimately work past. But it often gets confused with social anxiety and that’s a totally different thing. “If you notice your child is having real difficulty in social situations—say, sharing something in circle time or making even one good friend—you might want to reach out to your primary care provider or a child therapist just to have additional resources to help them work through that anxiety,” Geering says. And even then, it’s not something they can’t recover from. “Even if your kid is having trouble with relationships with others, having a strong and supportive relationship with you—their caregiver—is one of the best predictors of positive long-term outcomes,” Geering adds.

72 Gifts for Teens That Are Actually Cool, According to Real High Schoolers