How Long Can You Leave a Dog Alone? The Answer Might Surprise You 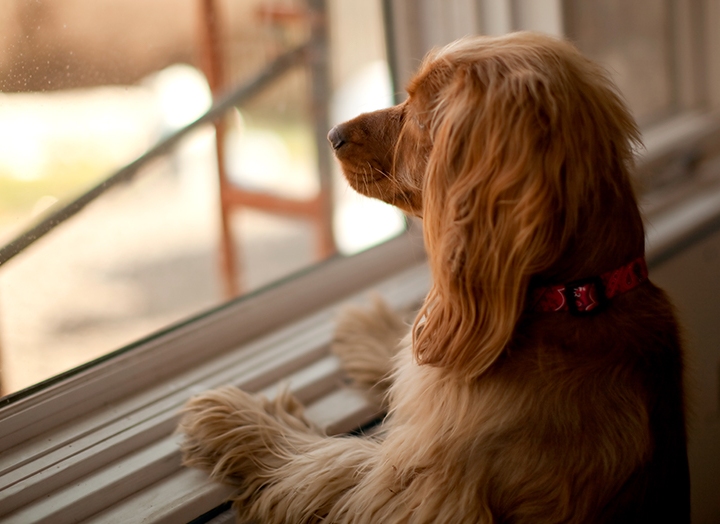 We know you don’t take pleasure in leaving your dog home alone. But sometimes it has to be done (ever heard of something called work?). If you must head out sans dog, the general consensus is not to leave your dog alone for more than four hours. This time varies depending on your dog’s age, health, behavior and temperament. A puppy who still needs to be potty trained and a senior dog who snoozes most of the afternoon require very different schedules. Read on to learn more about the factors affecting how long you can leave your dog alone—and how to do it in a healthy way.

The People's Dispensary for Sick Animals (PDSA) is a U.K.-based nonprofit with 48 pet hospitals in its network. The PDSA says pets have five welfare needs: health, diet, behavior, environment and companionship. As social creatures, dogs need plenty of interaction and companionship to live healthy lives—even the ones who enjoy their alone time.

Interestingly, the covid-19 pandemic has impacted many pets’ behaviors, especially when it comes to spending time solo. The annual PDSA Animal Wellbeing (PAW) Report for 2021 shows that 27 percent of dogs who were adopted since the pandemic started in March of 2020 are demonstrating behavior that can be tied back to a lack of socialization. Almost 20 percent of newly adopted pups get stressed out when they are left alone, likely because for most of their time with their new humans, the humans were always around!

Even dogs who were already family members before the pandemic have been acting differently. The PDSA says 22 percent of dogs owned pre-pandemic are doing new things—including willingly spending time by themselves in quiet zones and getting fussy when left home alone. Another survey from Dogs Trust found a “41 [percent] increase in reports of dogs being clingy” since the pandemic began.

Since dogs thrive with a routine, changes to our circumstances and schedules can really mess with their heads. Unfortunately, the PDSA surmises folks who adopted dogs when they were working from home or spending almost all of their time indoors during the pandemic are now realizing how time-consuming dog ownership really is.

Whether you’re a seasoned dog owner or new to the game, leaving your dog alone can be a touchy subject. The key is to ensure their safety, which includes monitoring their mental health.

How long can you leave a dog alone?

The PDSA says dogs shouldn’t be left alone on a regular basis for more than four hours. Modern Dog Magazine says crated dogs shouldn’t be left home alone for more than three or four hours. PAWS Chicago, a nonprofit no-kill shelter, says five to six hours is the max for an adult dog. As you can see, there isn’t a specific amount of time experts agree on for every dog and your dog’s needs might change over time.

It’s imperative you take into consideration your dog’s breed, age, size, learned routine, established behavior patterns and health when deciding how long to leave him home alone. Some breeds, like Australian Shepherds and Siberian Huskies, need a lot of exercise and can become incredibly destructive if they are bored or left indoors. More than two hours alone could send energetic breeds into a frenzy. Basset Hounds are much more sedentary and relax well on their own.

Puppies are the most straightforward when it comes to determining their needs (fulfilling their needs, however, may prove to be the most challenging at this age). Basically, puppies need a lot of care and attention. Never leave a puppy under ten weeks old alone for more than one hour. This is primarily because they don’t know how to hold their bladders yet and because monitoring them at this age helps establish rules and boundaries. The American Kennel Club says when your puppy is between ten and 12 weeks old, you can work your way up to two hours. By six months old, most dogs can hold their bladder for about six hours. Senior dogs, on the other hand, will not only be able to go longer without a bathroom break, they’ll likely nap for more of the day than a young pup.

Dr. Katie Pagan, Partner Doctor of Heart + Paw Fells Point, also notes a dog’s size and health conditions may mean more bathroom breaks. “Dogs that are younger or smaller in size need to be let out more frequently. Dogs that are older or may have underlying health conditions [like] Diabetes, Cushing's disease or kidney disease will also need more frequent trips outside,” she says.

Any dog, regardless of breed or age, can develop separation anxiety. Dr. Pagan noted owners leaving for prolonged periods of time can either trigger separation anxiety for the first time or exacerbate existing generalized anxiety in pets. Plus, as the PDSA and Dogs Trust found, more dogs are experiencing symptoms of separation anxiety since the pandemic. If this is the case with your pet, you will need to adjust your dog’s alone time to ease their distress gradually. Severe cases of separation anxiety can result in your dog barking, destroying furniture, going to the bathroom and even self-harming while you are out.

Discussing separation anxiety with a vet or licensed canine behaviorist is the best thing you can do. Trying to tackle it alone can be daunting—and may even make your pup’s distress more intense!

The importance of alone time

The American Kennel Club—and any good dog trainer—says teaching your dog to be alone is important. Not only will it build up your dog’s confidence and improve their mental well-being, it will make leaving the house to see a movie or go out to dinner much less stressful for you. Start small (say, ten minutes) and work your way up to more time. Ideally, you’ll be able to begin this process before your dog is an adult with ingrained routines and behaviors.

Making alone time more appealing to your dog is key to ensuring a safe, soothing experience while you’re away. Consider investing in one (or more!) of the following items:

Finally, hiring a dog-walker or dropping your pup off at daycare are excellent ways to ensure he is surrounded by playmates and supervision. While these services can be pricey, they could save you a bundle in damaged couches or soiled linens. The Animal Humane Society says even one day per week can drastically improve your dog’s life. Plus, your dog will be happier, which is priceless.