I Gave My Anxious Dog CBD Oil During a Flight, and Here’s What Happened 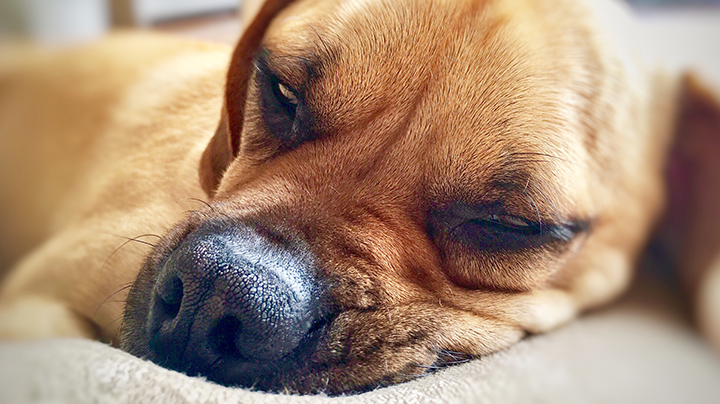 Seven hour-long episodes of Poldark downloaded; Bluetooth headphones charged and ready to go; and a book just in case we’re stuck on the tarmac for longer than expected. I’m so prepared, my flight anxiety is basically at zero.

As for my pup, Oakley, she’s totally fine traveling with me…well, except for that tiny little portion of the trip when the plane’s ascending or descending. I’m no doctor, but I’m pretty sure it has to do with the change in pressure because as soon as we plateau, she relaxes. But during takeoff and landing, Oakley is freaking the hell out, whimpering and shedding like never before. Poor baby.

My sweet Pekingese-Dachshund mix has been prescribed “puppy Prozac” from a vet before, and while it definitely quells her anxiety, it also zonks her out for the entire day. So, on my most recent flight, I decided to try something more holistic: CBD-infused hemp oil.

Before you call me the next Pablo Escobar (or the cops), you should know that hemp-derived CBD (cannabidiol) is legal in all 50 states. It’s non-psychoactive, and you don’t even need a medical card to buy it. While I couldn’t get a vet to recommend any products (they’re not legally allowed to at this point), one did tell me—off the record—that if you get your CBD oil from a reputable company, it honestly couldn’t hurt to try.

So, a couple days before the flight, I put two little drops of Extract Labs hemp tincture (hemp oil rich in CBD in a base of fractionated coconut oil) in my dog’s food. I didn’t notice much of a difference in her behavior, but I also didn’t notice any adverse effects either. Phew. The next day, I gave her a couple drops without food. The change was subtle; she was more relaxed and a little more cuddly than usual, but she was back to barking at skateboarders within the hour. Perfect.

The little vial of hemp tincture was easy to carry with me on the plane, and while it is perfectly legal, it smells like, er, a college dorm. So, yeah, I did feel part badass, part the first 25 minutes of Brokedown Palace. As soon as we got in our seats, I gave Oakley two drops of the tincture sublingually (under her tongue), and I didn’t detect any disapproving faces about the short-lasting smell. By the time we were taking off, Oakley was still on higher (pun not intended) alert than usual, but her whimpering was significantly dialed down. Plus, she didn’t make her usual crazed attempt to escape and run down the aisle. That’s a win to me.

When the flight attendant announced, “prepare for landing,” I gave Oak another couple of drops, and that was that. Usually, after flights my pants are covered in dog hair shed from all that nervous energy. This time, I didn’t even need to dig out the lint roller in my bag. Another big win.

An hour later, we were barbecuing at my parents’ house, Oakley was back to normal, running around like a Tasmanian devil, and my dad was begging to try the CBD oil himself—we all took a drop. But that’s another story.

The Best Dog Breed for Stressed Out Humans