Can Dogs Sense Pregnancy? (Asking for a Friend) 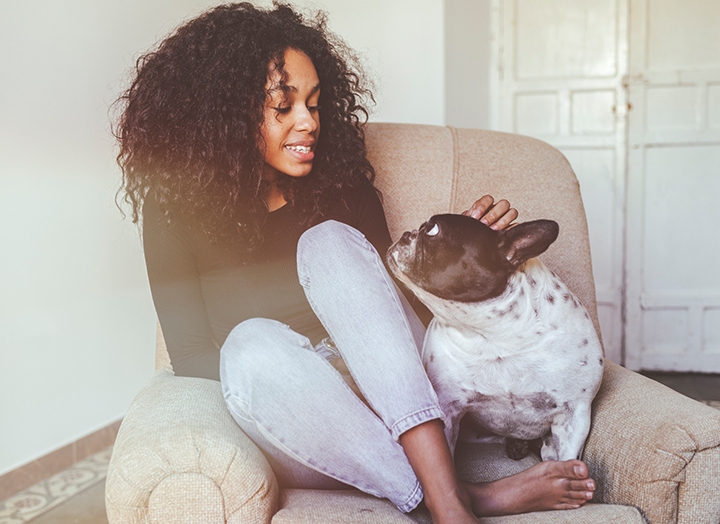 Dogs are often hired to perform seemingly impossible tasks because their noses are so powerful. At airports, they smell luggage for narcotics and explosives. At crime scenes, they can sniff out human remains. So, can dogs sense pregnancy? While there’s no definitive research, given their olfactory talents, the idea isn’t that far-fetched. We did some research on the subject and, while we don’t advise relying on your pup to confirm a baby is on the way, it’s worth taking a pregnancy test if Lola suddenly starts behaving like a big sister.

How well do dogs smell?

A dog’s nose is truly remarkable. Dr. Lynn Buzhardt, DVM, at VCA Animal Hospitals says dogs have more than 100 million receptors in their nasal cavity. Another report, from the Alabama Cooperative Extension System, puts this number as high as 220 million. The olfactory lobe in a dog’s brain—where scent is processed—is roughly 40 times the size of a human’s. This means when you smell freshly baked bread, your dog can smell it between 1,000 and 10,000 times better than you can.

On top of that, Lola can detect another pup’s sex, health and demeanor with a single whiff of the pup’s odor (which is why dogs greet each other nose-to-butt). On top of that, canines can recall scents from years past. Their scent memory helps them identify dogs, people and places, even if they haven’t been near someone in a very long time.

Hormones are like little chemical news alerts that inform the body about what’s happening in other systems. When women become pregnant, their bodies produce human chorionic gonadotropin hormone (hCG). This hormone is only produced during pregnancy, and in super high quantities. Estrogen, progesterone and human placental lactogen (hPL) also spike during pregnancy. Often, hormonal changes alter body odor and mood.

Now, dogs have been known to detect cancer cells in certain human fluids. Medical News Today reports that by sniffing urine, sweat, breath and skin, dogs have been able to detect lung cancer and melanoma. The company Dogs 4 Diabetics pairs diabetic humans with pups who are able to alert them to hypoglycemia, based on scent. Ergo, it’s not completely out of the question that a sweaty pregnant owner could emit a new scent her dog could pick up on.

One important note: Dogs are not aware of the meaning behind scents they are trained to identify. For instance, National Geographic reports drug-sniffing dogs are taught target scents for specific substances. They become experts in identifying these scents, associating sniffing out narcotics with a job well done. So, if Lola senses a hormonal change during pregnancy, she may simply be responding to the change, rather than the fact that a baby is coming.

Kate LaSala, a certified, professional dog trainer and behavior consultant, is asked frequently if dogs can sense pregnancy. “The short answer is no, not exactly,” LaSala says. “But, dogs, with their strong sense of smell, can detect changes in mom’s smell as she moves through her pregnancy and many dogs are sensitive to changes in appearance or gait.”

LaSala, a licensed Family Paws Parent Educator with Rescued by Training, notes changes in routine or updates to a home (like a nursery) can account for odd behavior. “Oftentimes, when owners come to me with concerns about the dog acting differently, we can connect it to these household disruptions.”

Phil Tedeschi, a human-animal connection expert for Rover, echoes LaSala. “To dogs, we are our scent—and olfactory recognition is the primary way that most dogs know us. This capability is so sensitive that dogs can tell time through their capacity to smell how long ago you may have last been home.”

Again, beyond scent, dogs notice changes in routine. “There are likely many other noticeable changes occurring in a household awaiting a new baby such as new activity routines, personal attention and time, rearranging the home environment, and new sounds, sensations and emotions occurring within their family,” adds Tedeschi.

What behavior should I look for?

Tedeschi advises watching for any shift in behavior or increased stress. “Dogs, like people, have unique individual personalities so will not react in a uniform manner to almost any situation,” he says. “If your dog senses their family pulling away from their old routine, they might feel grief or some impending sadness associated with the changes. We have [also] however observed some dogs that find themselves protective or excited about the arrival of a new pup.”

In conclusion, dogs probably know something is up when you become pregnant. Whether it’s due to their heightened sense of smell, keen observation skills or something else entirely, we don’t know. What we do know is pictures of babies and puppies cuddling are always welcome.

RELATED Your Dog's Gonna Freak Out When You Go Back to Work, but Here's How to Prevent It, According to Experts