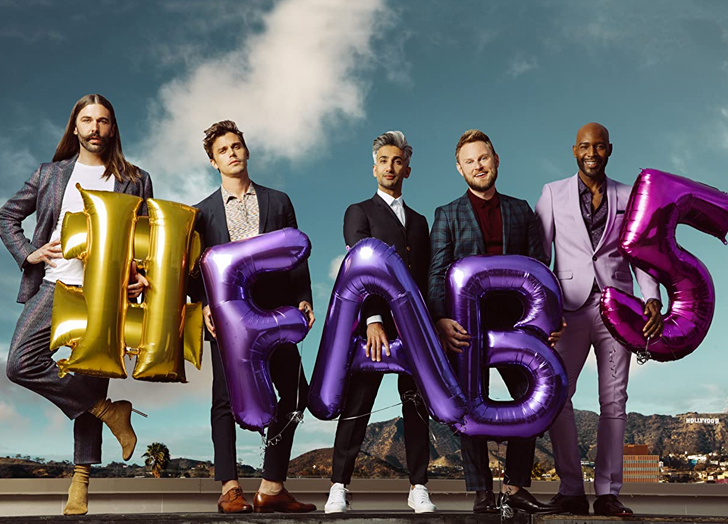 The Fab Five are back with a brand-new season of Queer Eye on Netflix and could we be any more excited? Bobby, Karamo, Antoni, Tan and Jonathan have all returned for Queer Eye season six, where we find ourselves in the great state of Texas.

As with previous seasons, these experts (a word some cynics might put in quotes depending on who we’re talking about) aim to improve the lives of local residents, one slice of avocado at a time.

And speaking of avocado (ahem, looking at you, Antoni), as much ﻿as the new season is enjoyable and emotional as always, it does seem odd that we’ve stopped talking about something that seemed so obvious to everyone back in season one: Queer Eye is clearly gaslighting us. This isn’t to say it isn’t a great show, but it really is trying to make us believe that each of the Fab Five do an equal amount of work to help the makeover hero at the center of each episode—a fact we know to be entirely untrue.

And in season six, this gaslighting is at an all-time high.

For those who remember the premiere season (where we first see Antoni show off his culinary skills by making, you guessed it, guacamole), you’ll recall that the Fab Five didn’t get equal screen time. As a matter of fact, some of the five wouldn’t really even get full one-on-one time with the hero depending on the episode. Despite the show’s best efforts to tell us otherwise, this left us all with the impression that some of the experts weren’t quite so important as others (and led to a lot of Antoni/avocado memes). Was this nice for the Fab Five? Perhaps not. But at least it was sliiiightly more honest.

But now, in the latest iteration, Queer Eye goes out of its way to give equal screen time to the experts. They each get a looooong amount of personal time with their subject. All of this is likely an attempt to make them seem more equally valuable. This, however, is where the gaslighting comes in. As Judge Judy would say, “Don’t pee on my leg and tell me it’s raining.” Or, in this case, “Don’t pretend like each of these five experts is doing the same amount of work.” We have eyes. It’s quite clear that Bobby’s redesigns and renovations are not equal to Jonathan’s haircut (which he doesn’t even perform himself sometimes) or Antoni’s speciale du jour.

None of this would perhaps matter if it weren’t for the outsized attention certain members of the cast get over others outside of the series. Antoni is arguably the most popular and successful, but doesn’t do the bulk of the heavy lifting in the show.

It’s also difficult to rank them based on their exact workloads (with one exception: Bobby is at the top of the list). Karamo seems to do more than the remaining three because his scenes inevitably have the most emotional impact (reuniting a daughter with her estranged father; in one case reuniting a shooting victim and the goddamn man who shot him!!). So perhaps we can rank Karamo as the member with the second biggest workload.

But then we have a rotating Jonathan, Tan and Antoni who do a great job of filling the episodes with personality and pizzazz, but who clearly are not pulling their weight equally in the overall transformation of the lead.

All of this to say, the show is great. It is fun. It pulls at the emotional heartstrings. But, damnit, why can’t Queer Eye just be honest that Bobby and Karamo are the senior experts with the help of their three charming friends? Why must we pretend a renovated and retiled bathroom equals a bowl of guacamole?

Please, stop gaslighting us, Queer Eye. And we promise, we won’t stop watching.

Which ‘Queer Eye’ Member Are You?