Bloomingdale’s Is 150 Years Old—and It’s Celebrating With a Huge (and Exclusive!) Designer Drop. Here Are 13 of Our Favorites 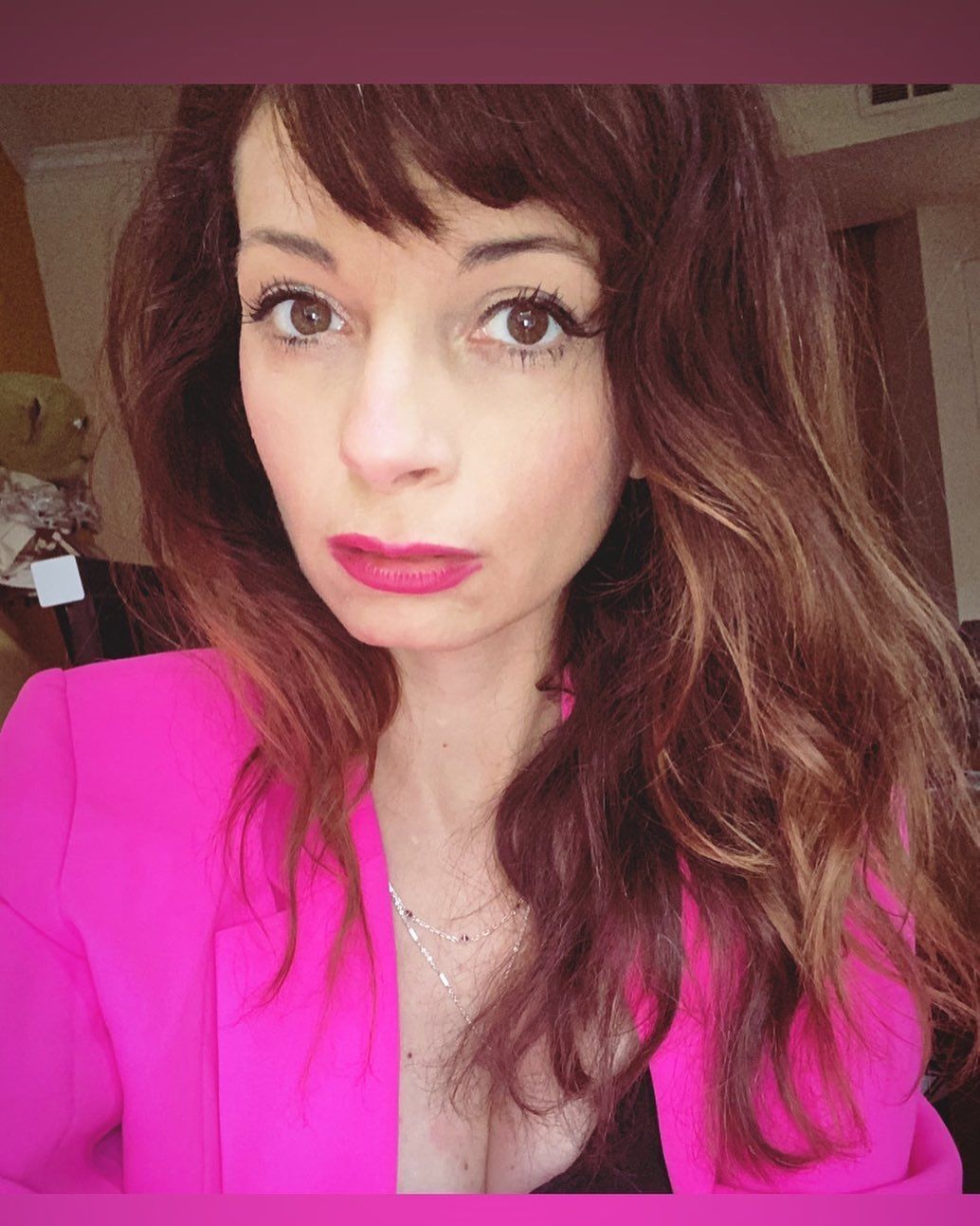 The world was a very different place 150 years ago. People were predominantly driving horses and buggies. Women were still wearing corsets. They also couldn’t legally vote (though that didn’t stop Susan B. Anthony!).  One thing that hasn’t changed? The stores we’re shopping in. Today, on September 8, Bloomingdale’s is celebrating its 150th anniversary—yes, folks, we’ve been carrying the little brown bag for longer than we’ve been casting votes at the ballot box. Though it’s not the only centenarian in the department store space (believe it or not, Lord & Taylor, Macy’s, Neiman Marcus and Saks Fifth Avenue all had their beginnings prior to 1872), it is a remarkable milestone in a world in which the average lifespan of a multinational corporation falls between 40 and 50 years—and that was before the e-commerce boom.

So how has Bloomie’s managed to stay afloat? Largely, with a focus on “exclusively, excitement and sophistication” throughout the years, as cumulated through the store’s relationships with popular and budding designers alike and a growing emphasis on customer service. After all, as Bloomingdale’s CEO Tony Spring says in a press release for the celebration, "Some of fashion's best brands started here, trends have been ignited here, and discoveries are made here every day.”

He’s not wrong: Before Ralph Lauren got his own eponymous store, he was overseeing the Polo by Ralph Lauren shop inside Bloomingdale’s, with top designers like Perry Ellis and Norma Kamali also getting a boost from their relationship with the store.

It’s these close connections that have allowed the retail giant to expand from its initial flagship store at 56th Street and 3rd Avenue (where the Queen herself once visited) to the 35 department stores and 20 outlets it had grown to as of 2020, including one in Dubai.

To celebrate, in true Bloomingdale’s fashion, the company has launched an exclusive, limited-edition collection comprised of more than 300 top-name designers. We’re talking Gucci, Givenchy and Chloé, along with more accessible names, like Staud, Maje and Cult Gaia. And we’ve combed through them all to find the best of the best of the collection—find the 13 items we’re putting on our Christmas wish lists below. 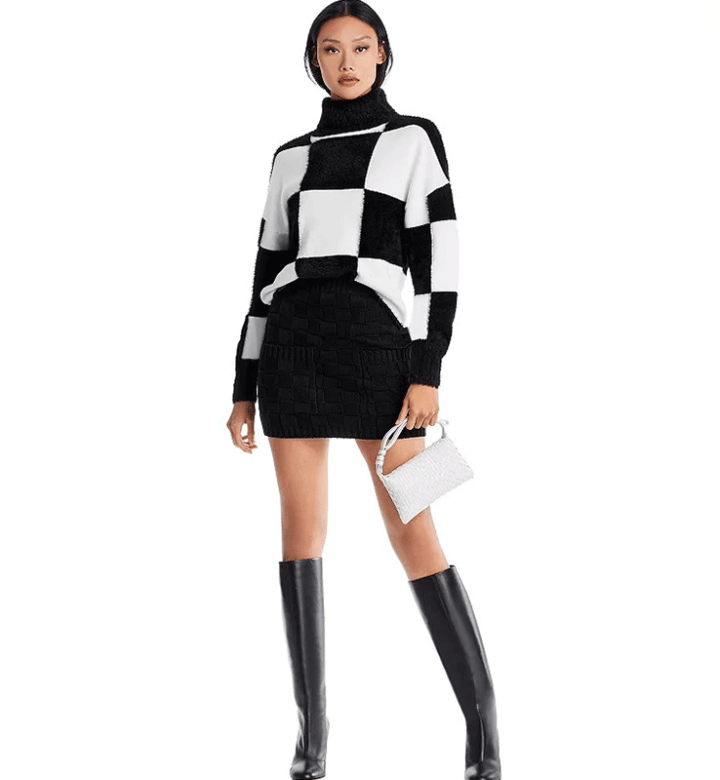 With houndstooth poised to be one of the biggest prints of the season, black and white is definitely in, and this fuzzy checkerboard number, created just for the occasion, gives it a unique spin that will set you apart from the sartorial pack. It’s got dropped shoulders for an ultra-cook *lewk* and ribbed cuffs that will keep your sleeves firmly in place. 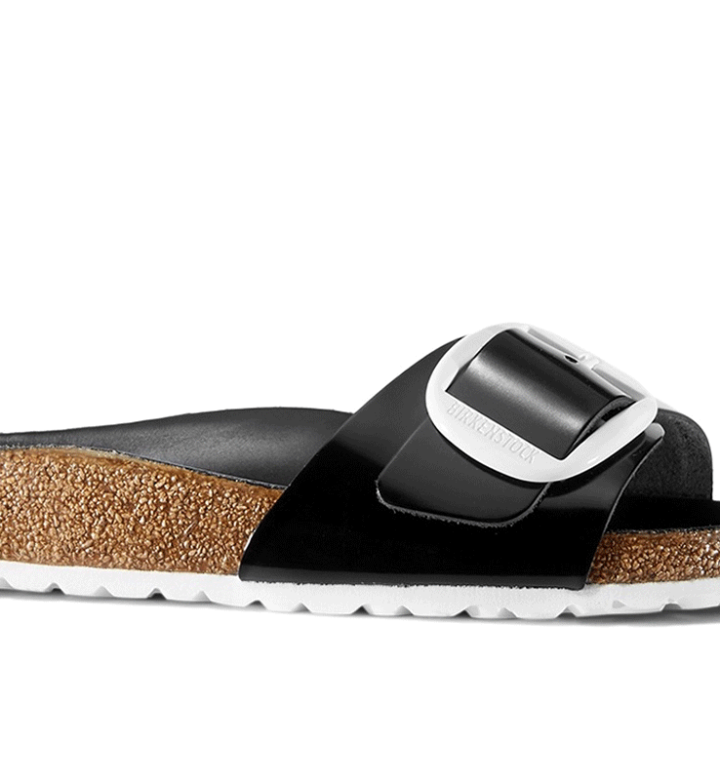 Stores couldn’t keep this leather style in stock this summer, so  we highly recommend nabbing it while you can in this limited-edition version, which features a smooth black leather strap with a large adjustable white buckle in a nod to the Bloomingdale’s signature colors. It also has a black lining (versus the usual cork hue) to cover its shock-absorbing cushioning. 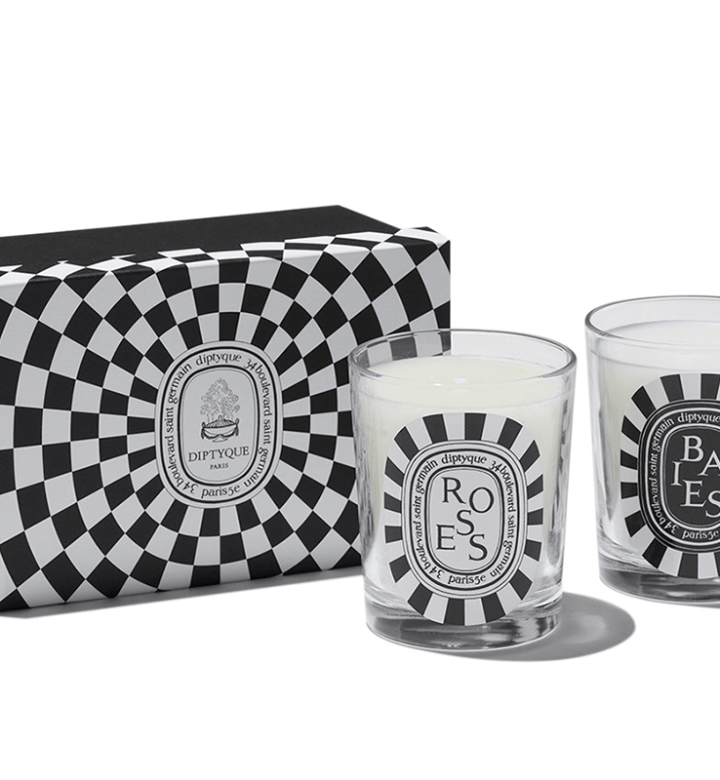 Two of French candle brand Diptyque’s most popular scents, Baies and Roses, get the anniversary treatment in this set, which features a limited-edition black-and-white checkerboard print on both the gift box and the candle glass. Each one burns for roughly six hours, and the throw you’ll get with each one is unparalleled. 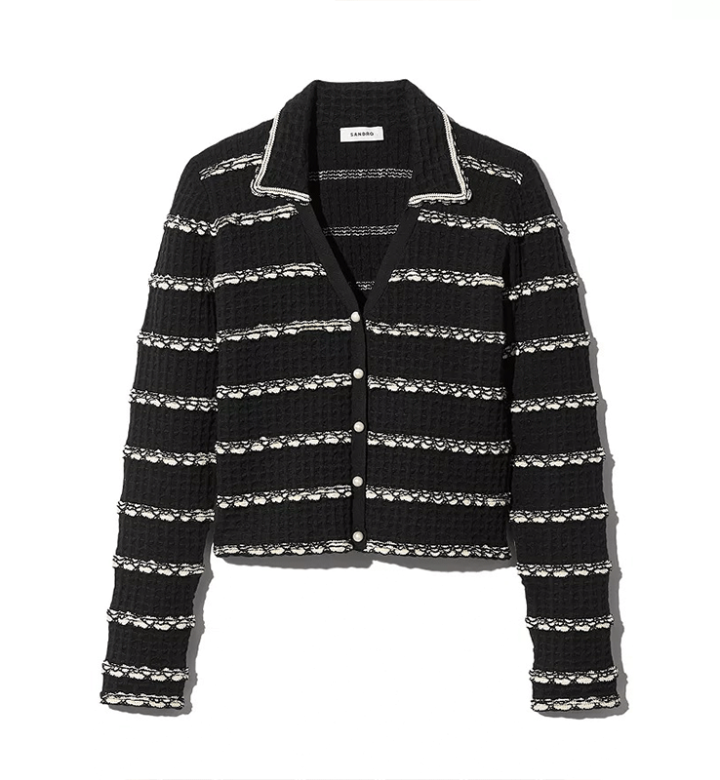 Want that French girl flair? Say hello to this gorgeous cardigan from Parisian brand Sandro. With an allover check-knit pattern and dainty buttons down the front, it’s the perfect wardrobe staple to throw on over a blouse and a pair of boyfriend jeans while you take your morning espresso (preferably on a sunny patio). 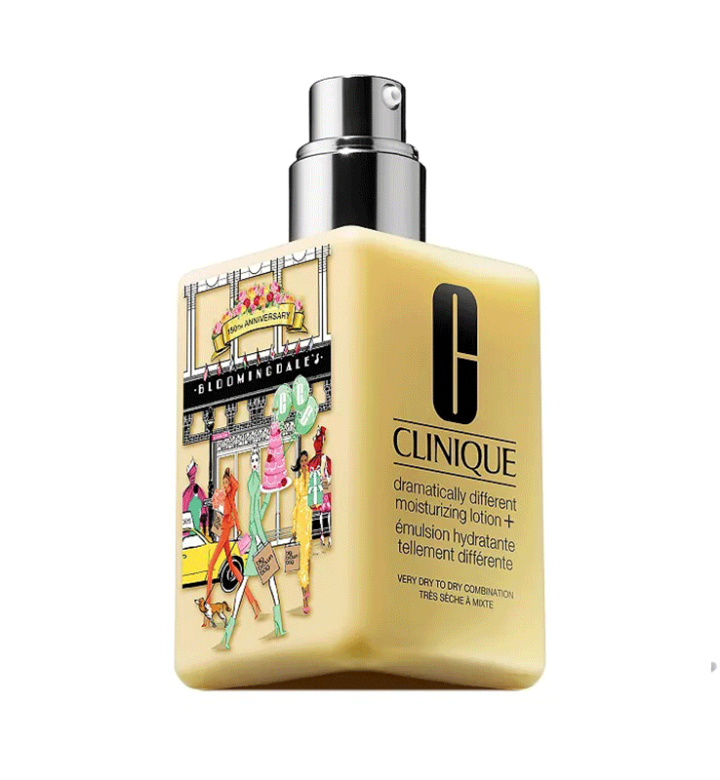 Long after you’re finished using this best-selling lotion, which is formulated to put some much-needed hydration back into your very dry or dry combination skin, you’ll be admiring the bottle, which features a special Bloomingdale’s design on the side that’s practically a work of art. What’s more, the company claims this lotion will keep you moisturized for up to eight hours and help to strengthen your skin’s moisture barrier by 34 percent. 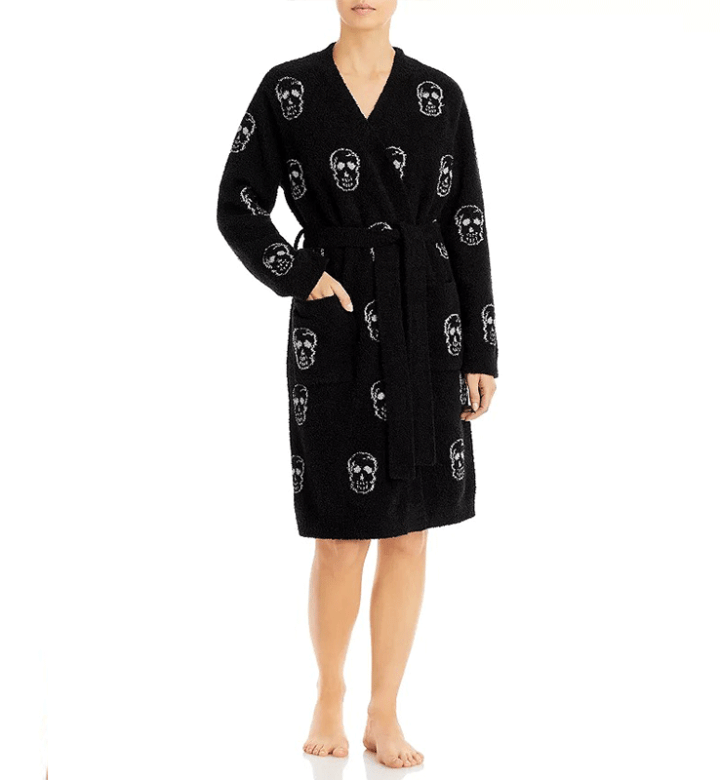 You know how absolutely heavenly it is to cuddle up on the couch in your fuzzy Barefoot Dreams In the Wild throw with a good book? Yeah, picture that soft, incredibly warm comfort enveloping your body post-shower. Now throw in a chic limited-edition skull print. Hello, perfection. 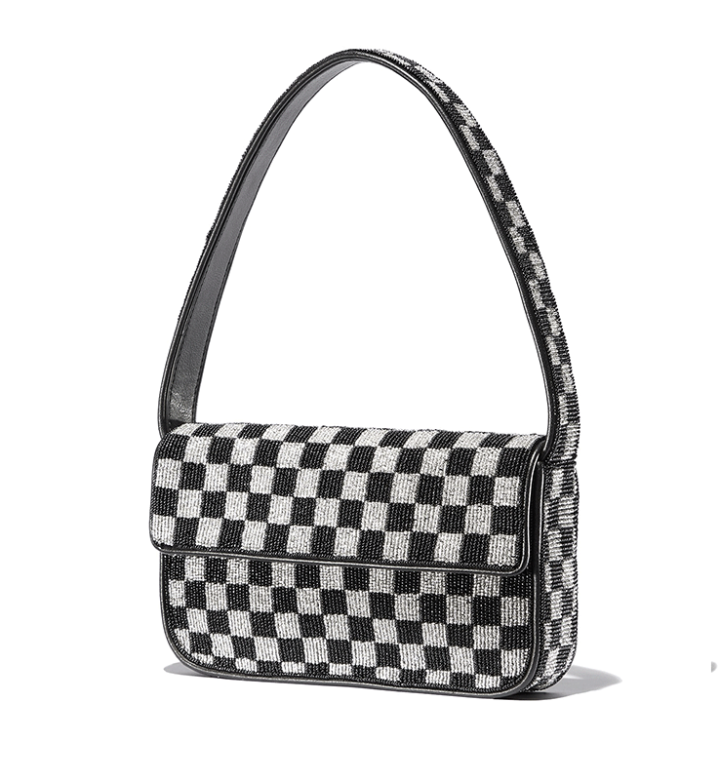 With intricate glass beading around the whole exterior, this checkered Staud bag is truly one-of-a-kind. Made in India, it offers just a touch of glitz for your next date night, plus, it will keep your things in order. It’s got a back slip pocket on the outside and a matching one at the interior, so you can safely stow your cash, lip gloss or mints (just in case all goes well). 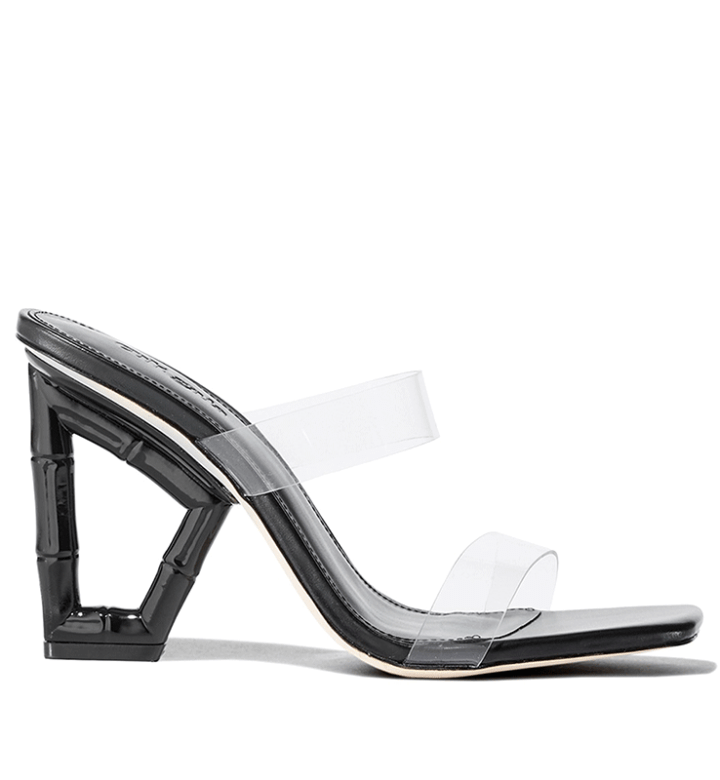 Cult Gaia has reached, well, cult-level status with its geometric shoe designs, and this lucite pair, inspired by bamboo (and, of course, Bloomingdale’s), is hand-made in Brazil with the brand’s signature uniquely structural heel. The leather lining will also feel oh-so-smooth against your foot. 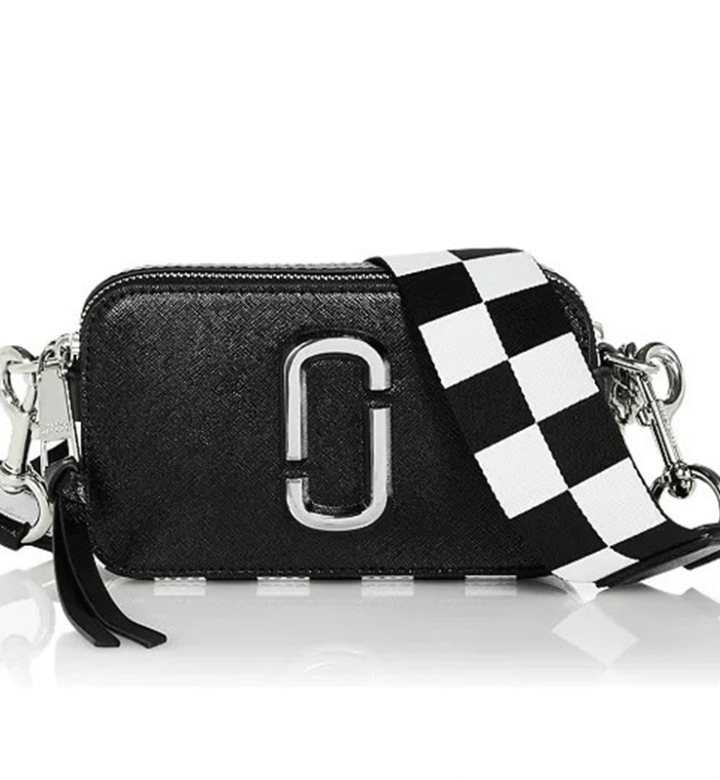 This classic MJ silhouette is updated with a luxe leather body and a shiny polyurethane coating, plus a removable checkered strap that speaks to the exclusive collection. It’s got a back slip pocket for your phone, plus two top-zip closure compartments to keep your things nice and organized. 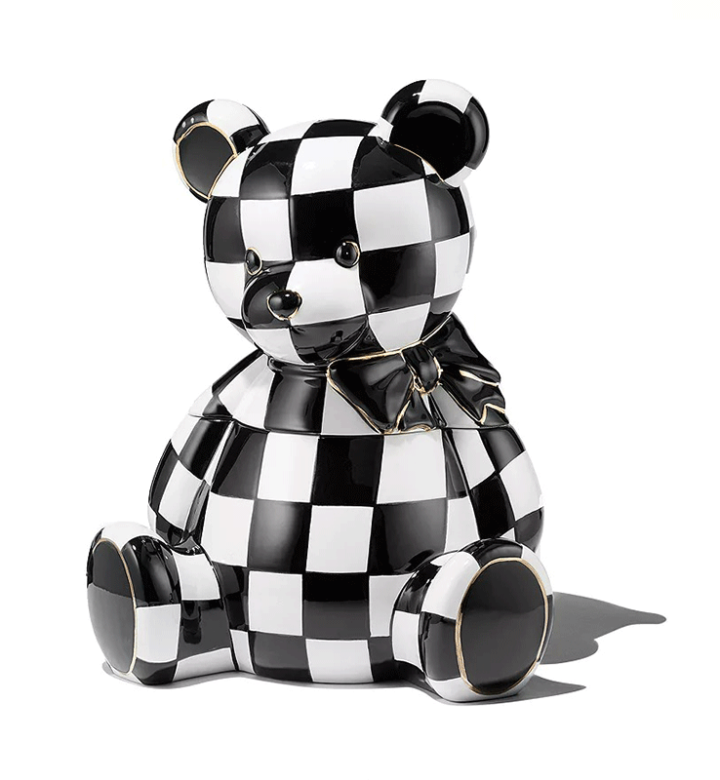 Give your kitchen some checkered flair (a huge décor trend this fall) with this adorable (and exclusive) Mackenzie-Childs Courtley bear. Hand-painted with gold lustre accents (ooh la la!), it’s made of ceramic and opens just under the neck for cookie (or K-cup. Or tea) storage. You can also mix and match it with several other Mackenzie-Childs kitchen items up for grabs for the store’s anniversary. 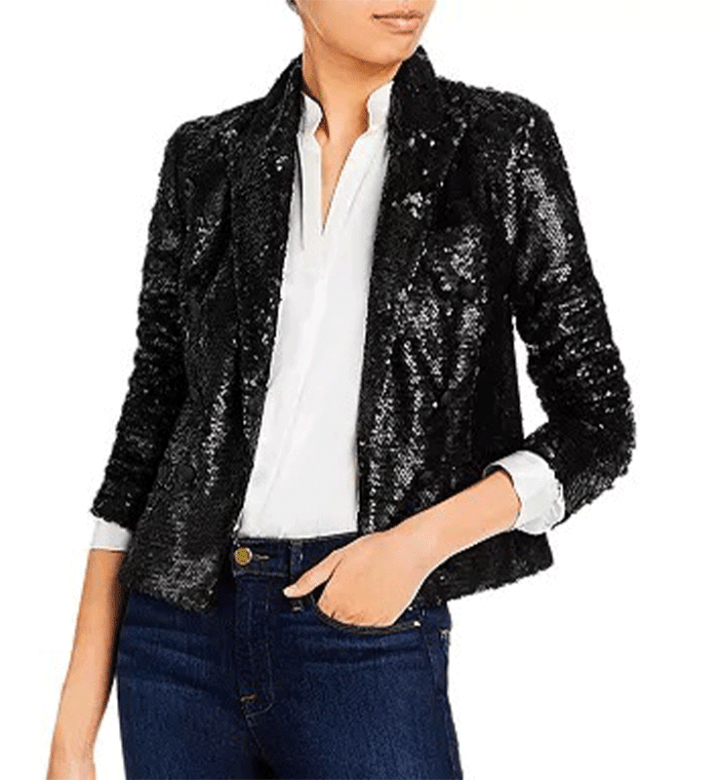 Yes, this is a splurge, but if you ask us, it’s also an investment piece. With matte black sequins hand-sewn with slight overlapping for a 3D effect, it’s able to dress just about any ensemble up without giving off too much of a disco vibe. There are working pockets at the sides, and it’s cropped to show off all your high-waist trousers. 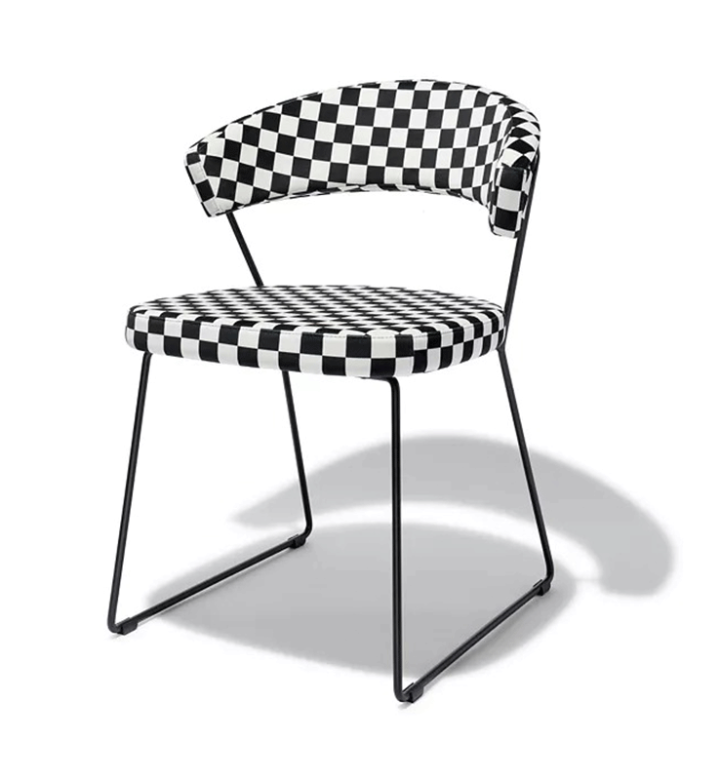 Just in case the bear jar wasn’t enough to really make your home pop, Calligaris contributed this stunning checkerboard deck chair that is sure to light up any room. It's got a sturdy metal frame and a nice, cushy seat your guests will fight for. 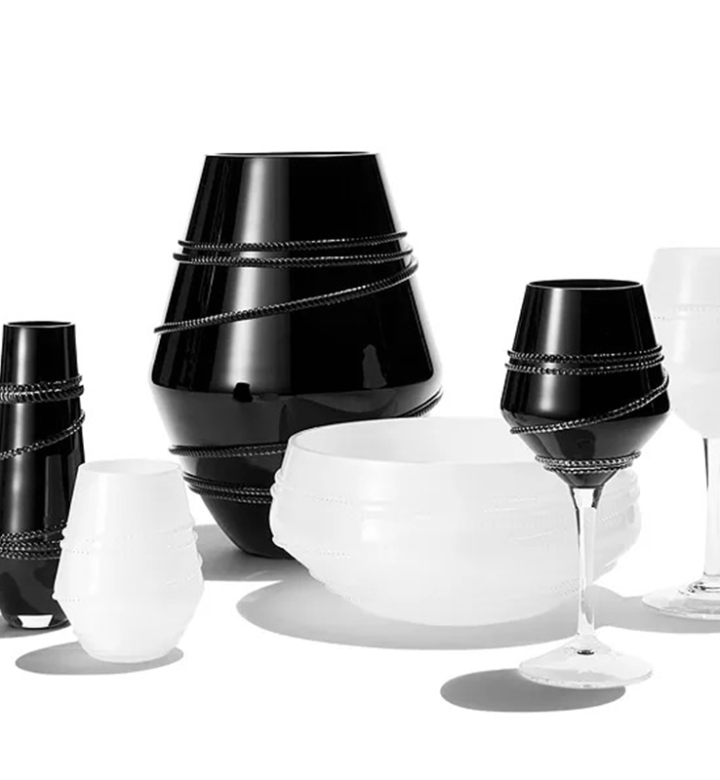 We can’t take our eyes off this black and white glassware from Juliska. Inspired by the glossy black-and-white floors of the Bloomingdale’s flagship store in NYC, each piece features chain-like wrap-around threads that glimmer a bit when they hit the light. Basically? It’s your new special occasion drinkware.