If you’ve ever experienced anxiety, you’ve likely been willing to try just about anything to make the feeling go away. Maybe you’ve gone for a long walk while listening to a favorite podcast. Maybe you’ve called your best friend to vent. Maybe you’ve bought a piece of jewelry meant to distract you. Maybe you’ve even tried journaling, which many anxious people and therapists alike tout as a stellar coping mechanism (more on that below). If you’re not a seasoned journaler, though, it can be tough to know where to start. That’s where journal prompts come in: They help guide you in your journaling practice and hopefully help you get more out of the experience as far as reducing anxiety goes. Read on for some of the health benefits of journaling, followed by 21 anxiety journal prompts to try the next time you’re feeling overwhelmed. 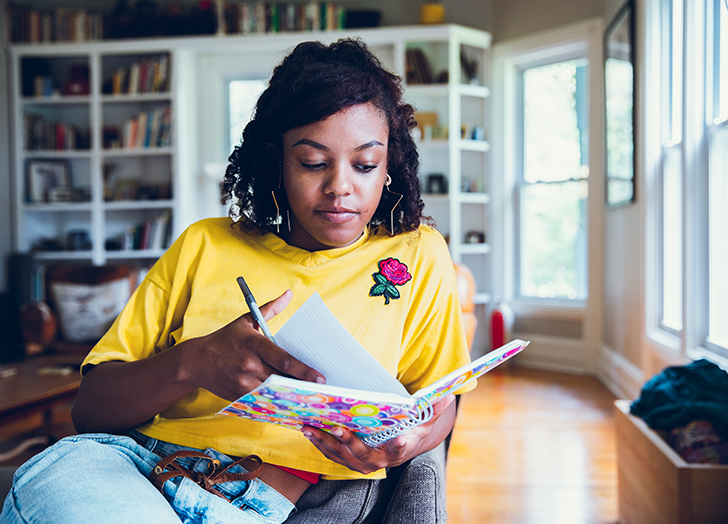 A 2013 study by researchers at the University of Michigan showed that, among people with major depression, journaling for 20 minutes a day lowered their depression scores significantly.

2. It Can Improve Your Communication Skills

Communication is one of those things we could probably all stand to get a little better at. Journaling is one way to do so. Why? It’s a way to practice translating your thoughts into words. According to a Stanford University report, “Both research in the field of writing and writing pedagogy have been built to a large extent on the premise that, as a fundamental discourse process, writing has critical connections to speaking.” Basically, writing can make you a better speaker—simple as that.

3. It Can Help You Be More Mindful

Sitting down and letting your thoughts and ideas flow out of your brain and into a notebook is a great way be mindful. According to Jon Kabat-Zinn, PhD, a molecular biologist and meditation teacher, mindfulness is an “awareness that arises through paying attention, on purpose, in the present moment, nonjudgmentally.” Proponents say that mindfulness meditation can contribute to stress reduction, improved sleep, heightened focus and increased creativity, just to name a few. According to a 2018 study published in BMJ Open, anxiety may increase the risk of developing cognitive conditions such as Alzheimer’s disease. But study authors suggest that meditative practices like mindfulness (which has been shown to help control anxiety) could potentially reduce this risk.

Can Journaling Every Day Make You Feel Happier? 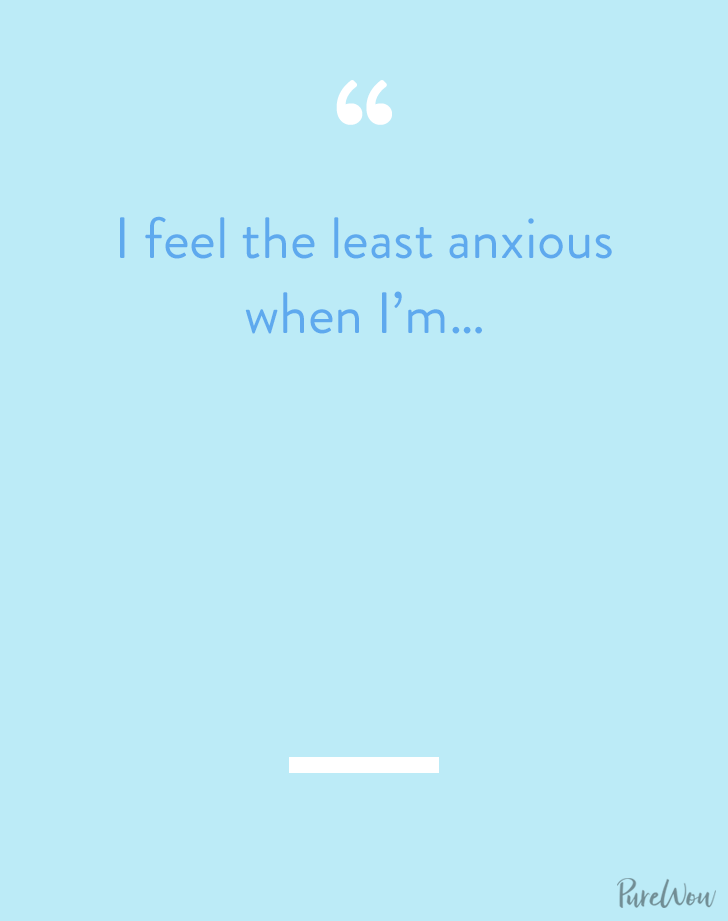 1. I feel the least anxious when I’m… 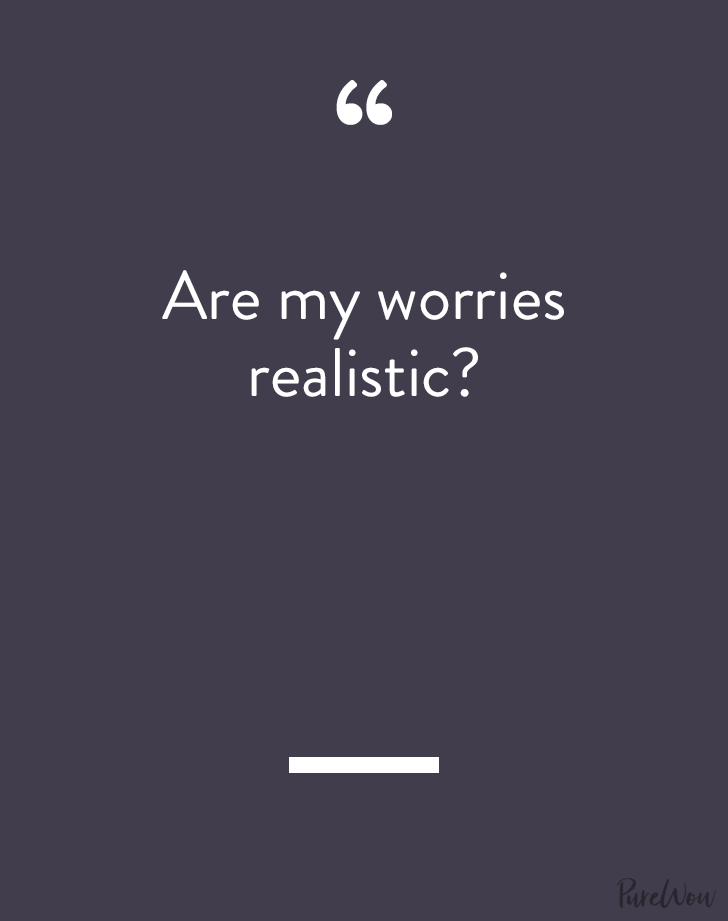 2. Are my worries realistic? 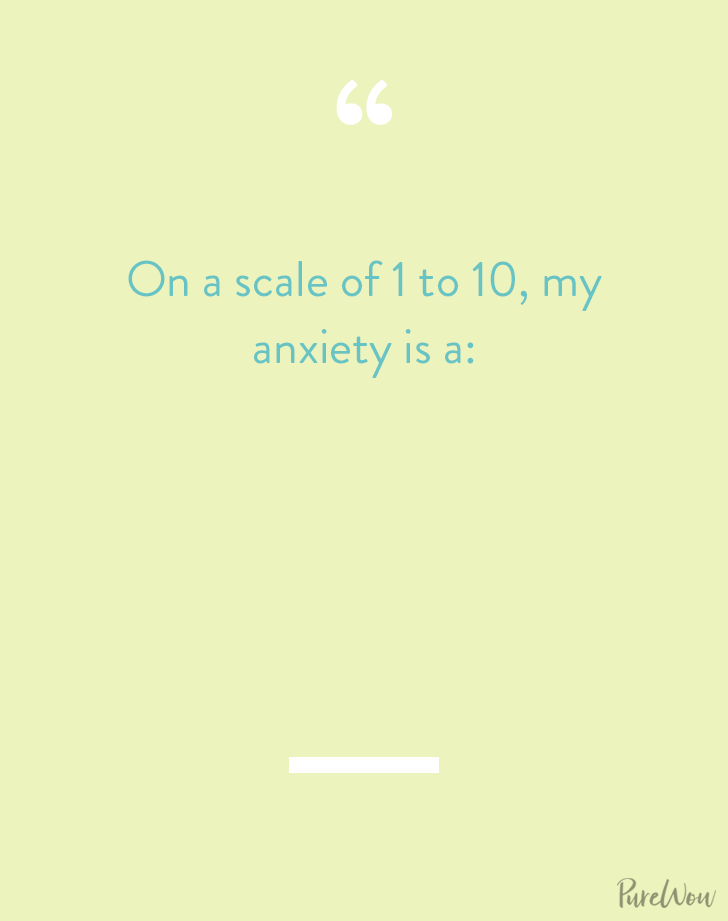 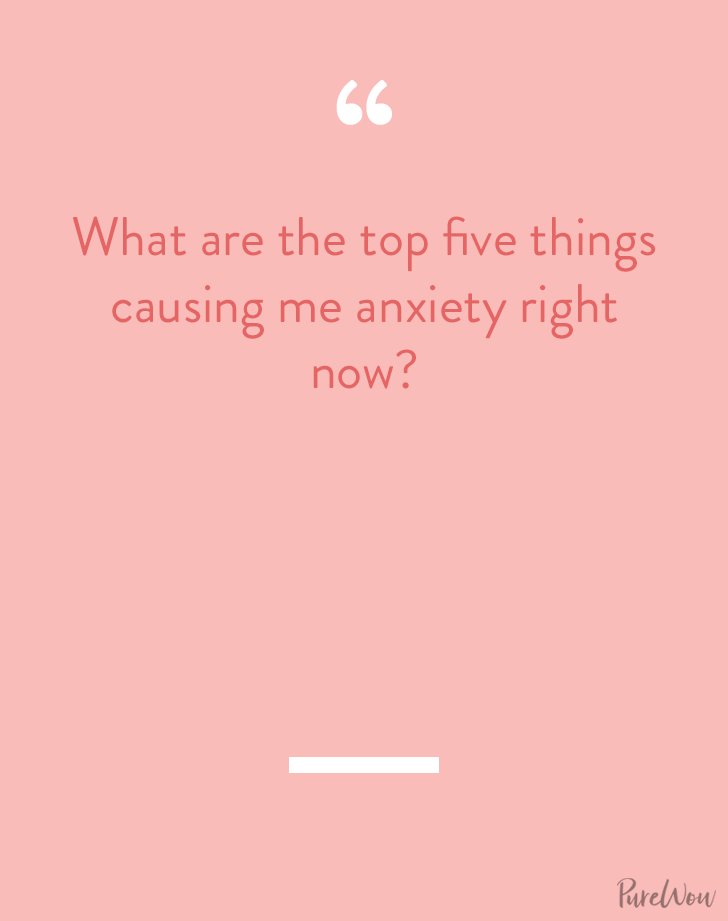 4. What are the top five things causing me anxiety right now? 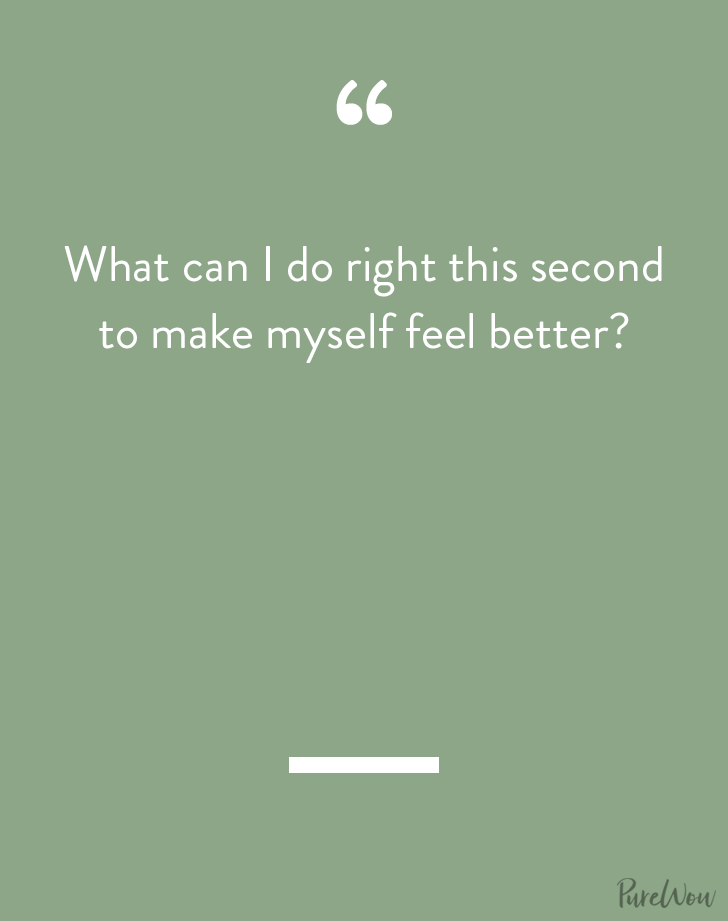 5. What can I do right this second to make myself feel better? 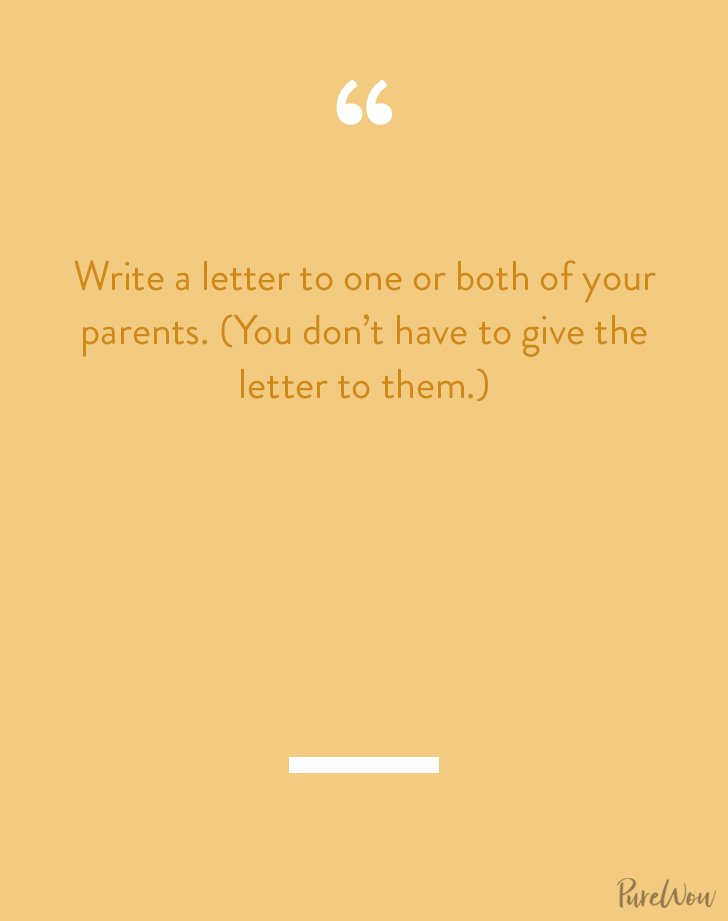 6. Write a letter to one or both of your parents. (You don’t have to give the letter to them.) 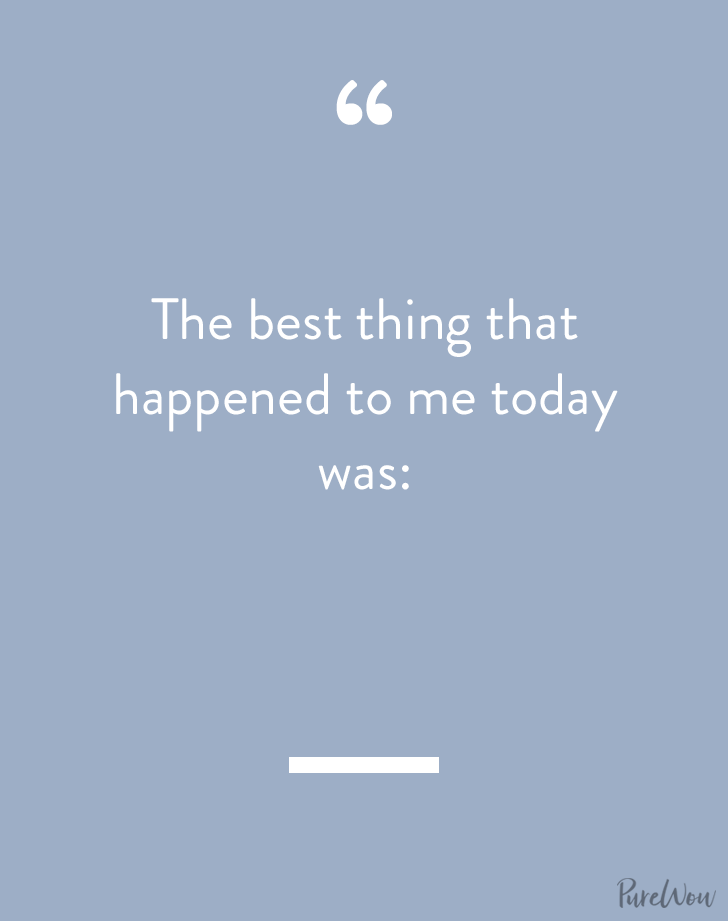 7. The best thing that happened to me today was: 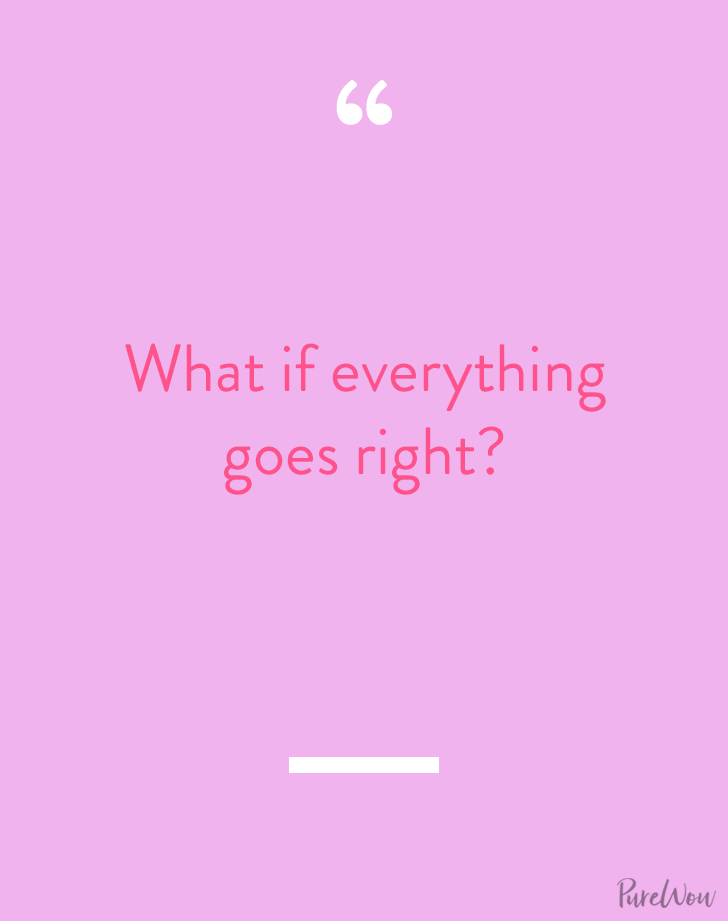 8. What if everything goes right? 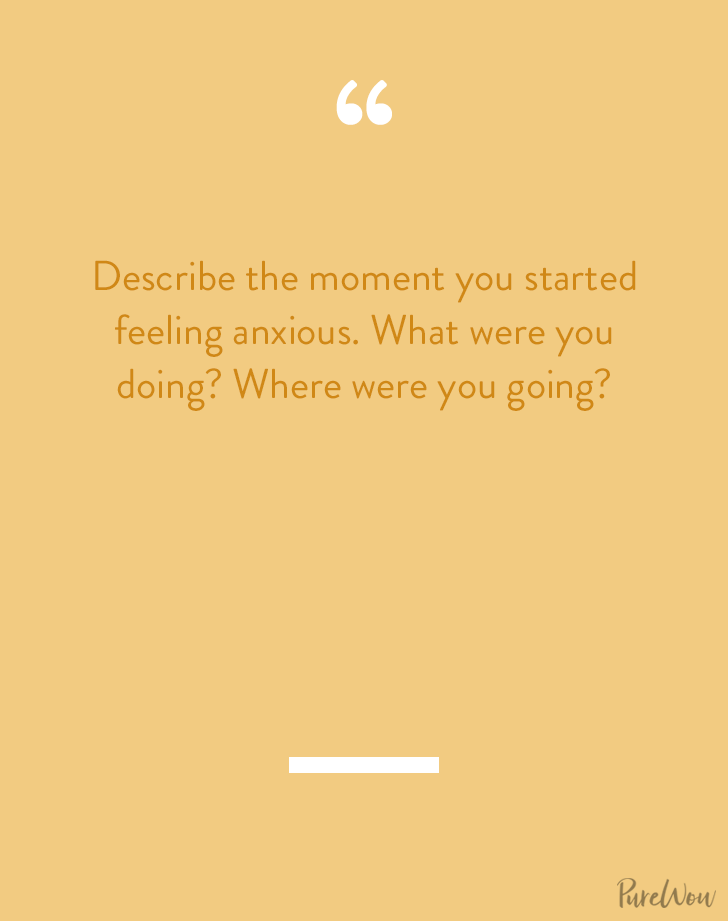 9. Describe the moment you started feeling anxious. What were you doing? Where were you going? 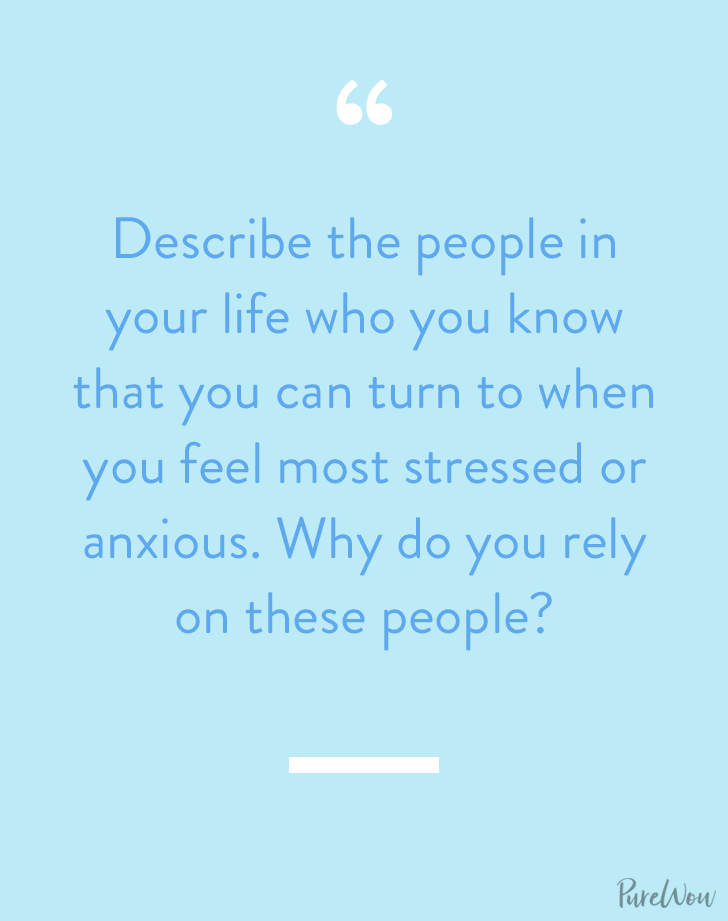 10. Describe the people in your life who you know that you can turn to when you feel most stressed or anxious. Why do you rely on these people? 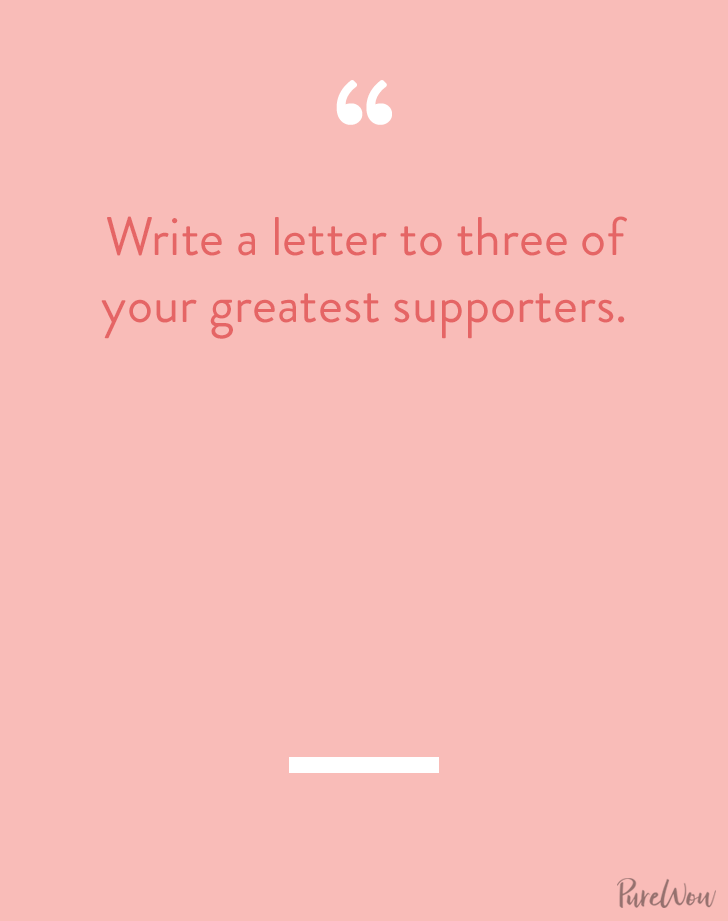 11. Write a letter to three of your greatest supporters. 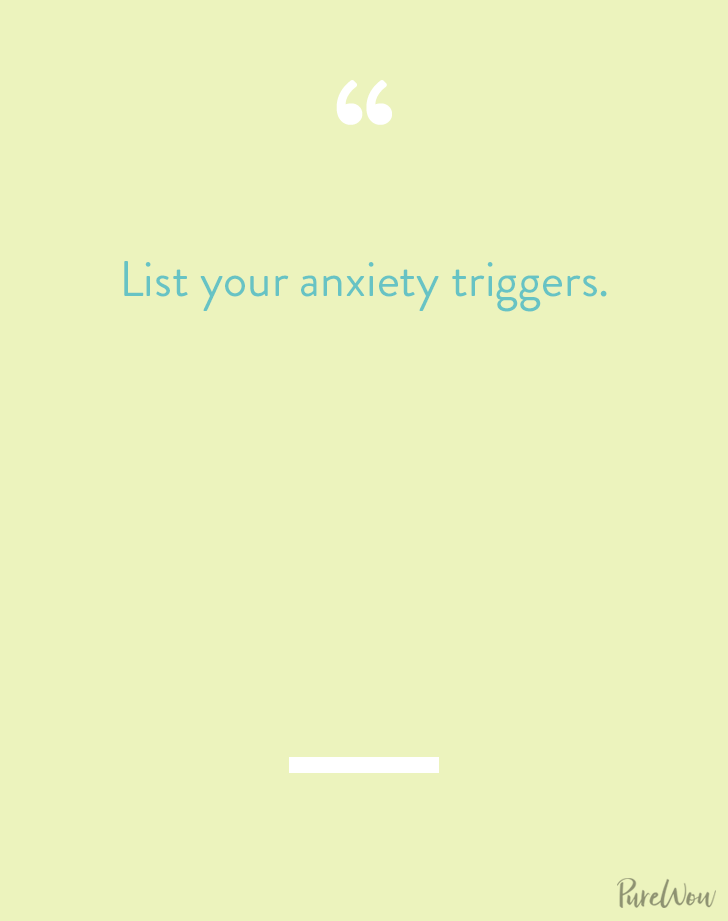 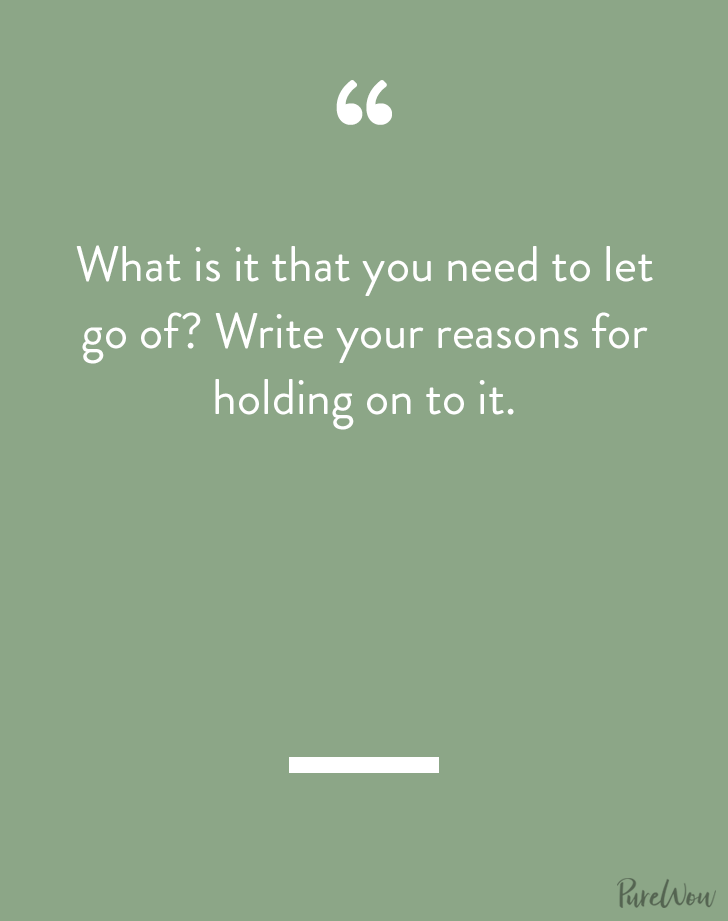 13. What is it that you need to let go of? Write your reasons for holding on to it. 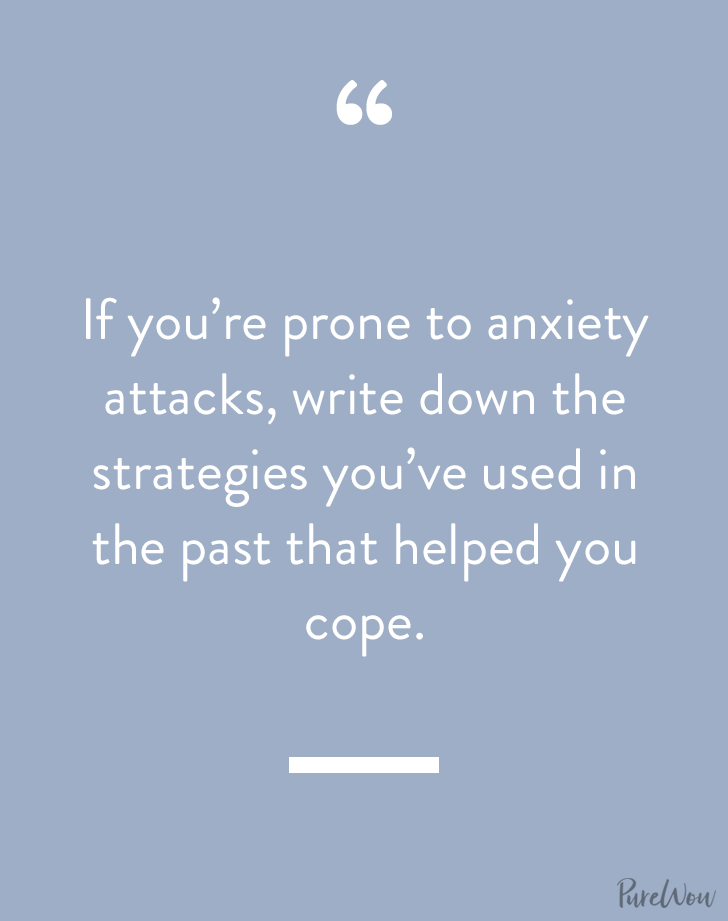 14. If you’re prone to anxiety attacks, write down the strategies you’ve used in the past that helped you cope. 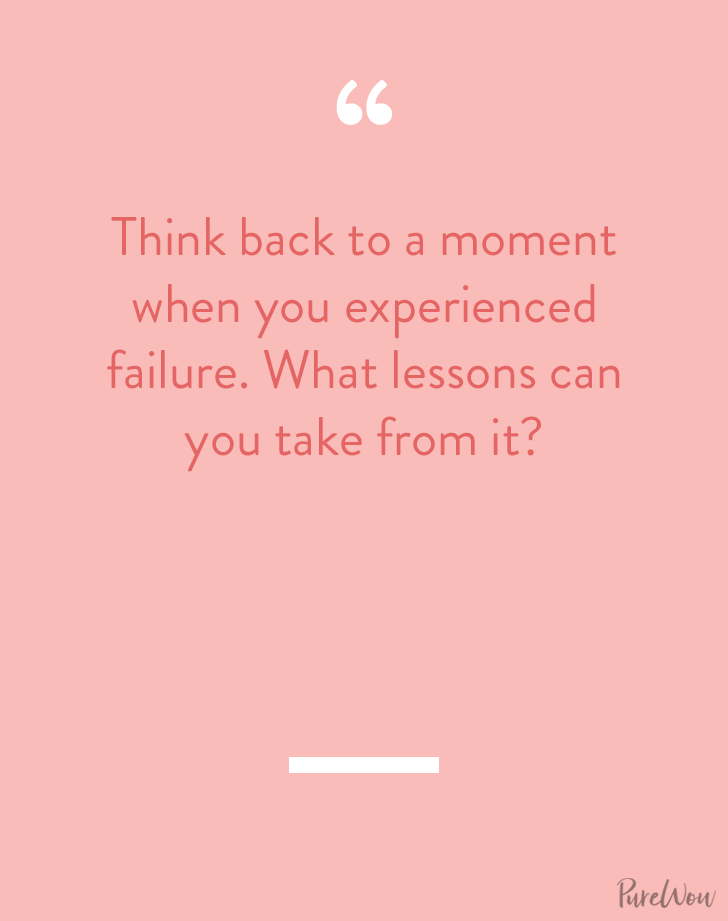 15. Think back to a moment when you experienced failure. What lessons can you take from it? 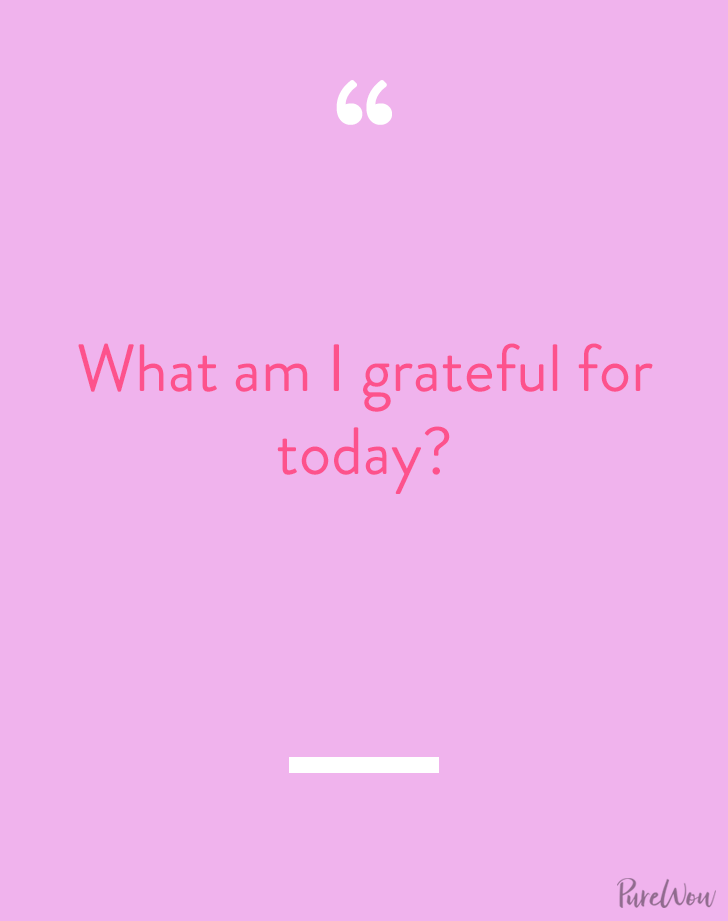 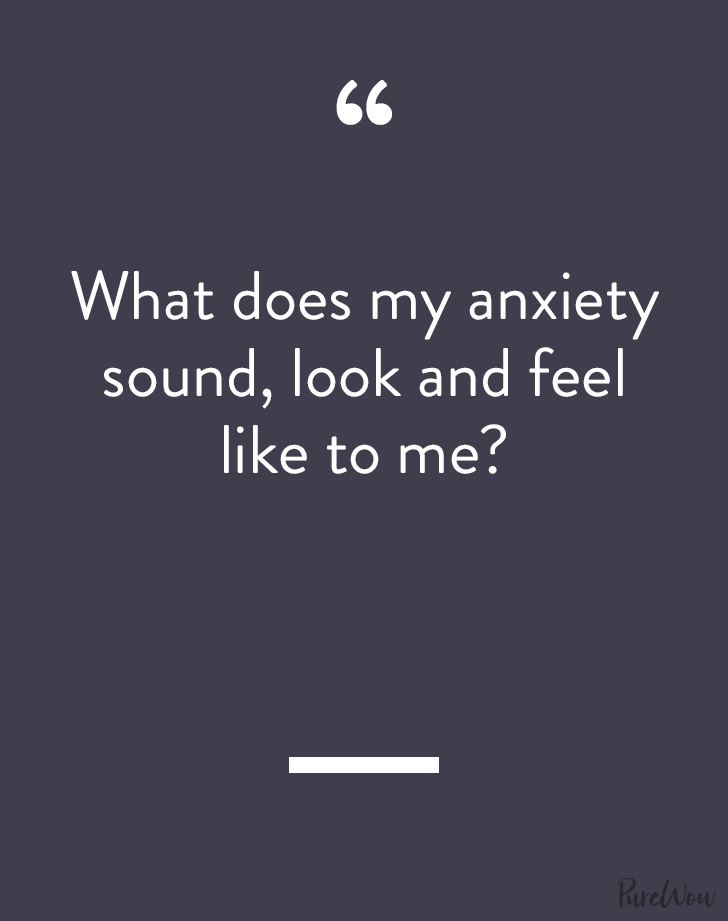 17. What does my anxiety sound, look and feel like to me? 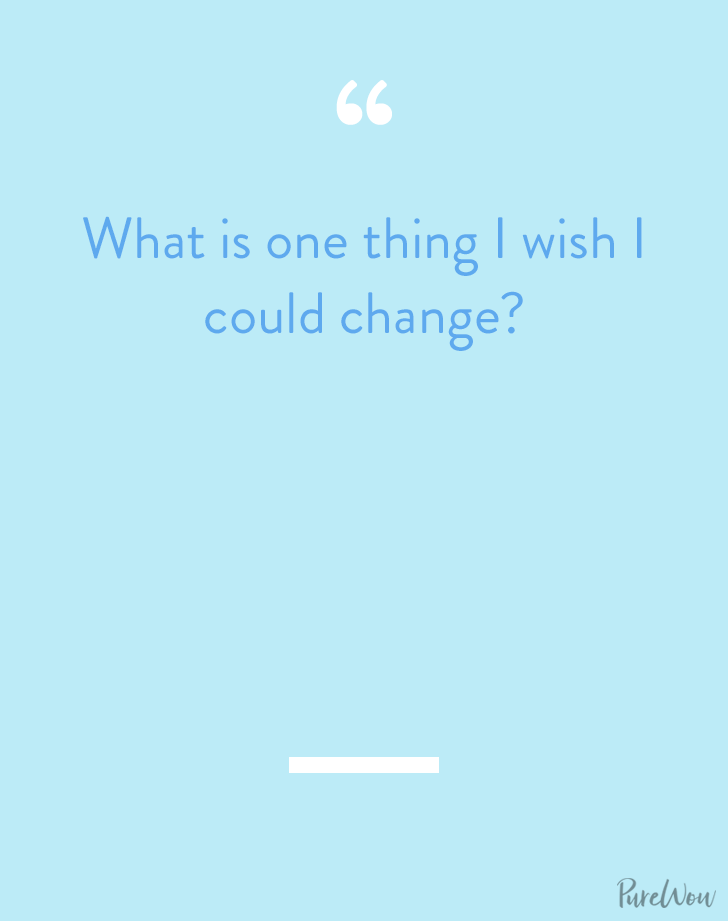 18. What is one thing I wish I could change? 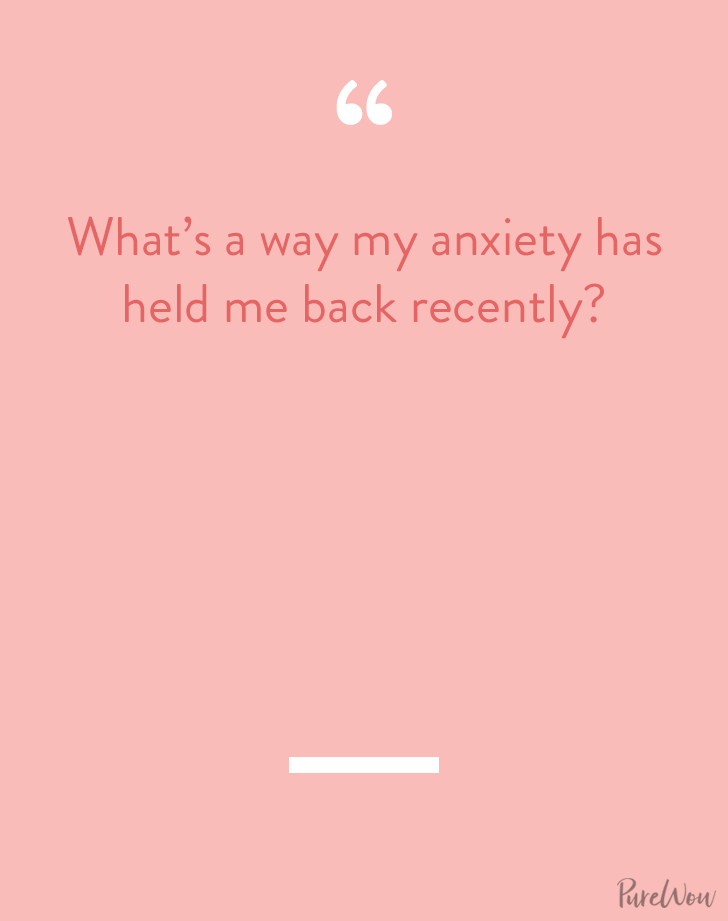 19. What’s a way my anxiety has held me back recently? 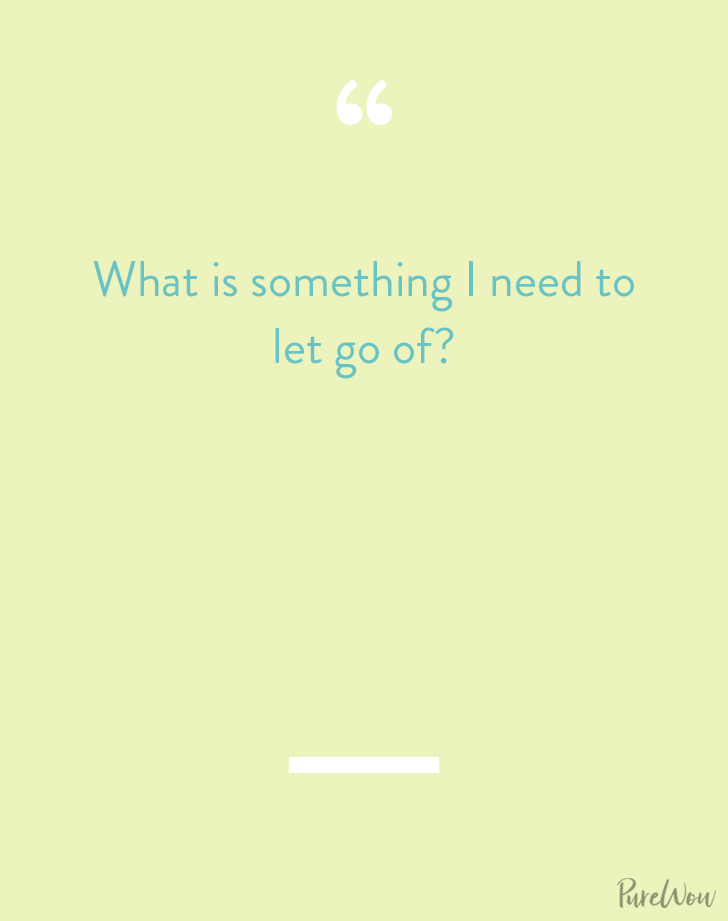 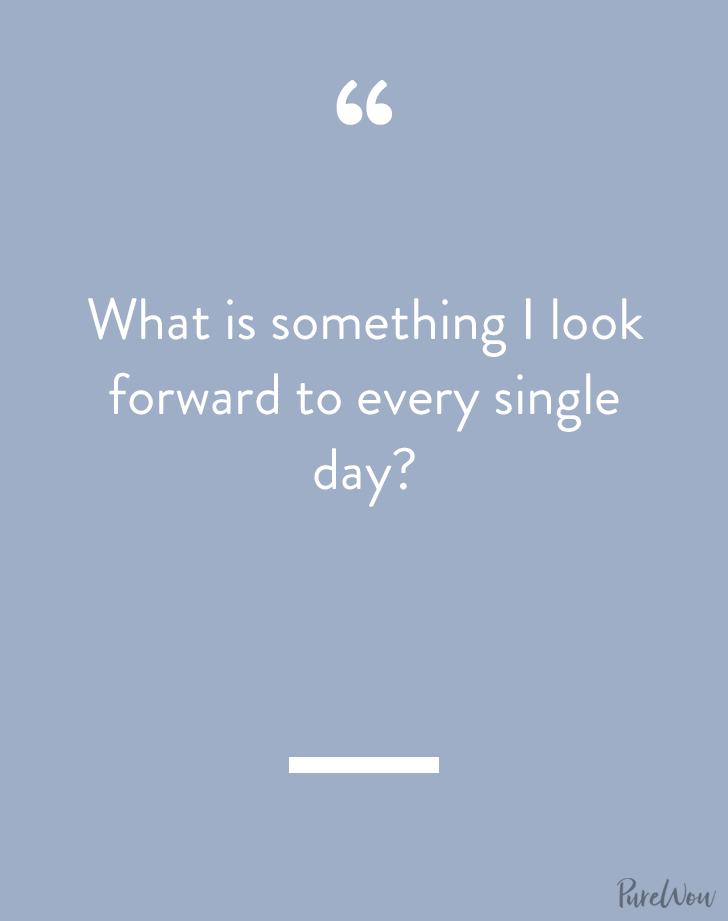 21. What is something I look forward to every single day? 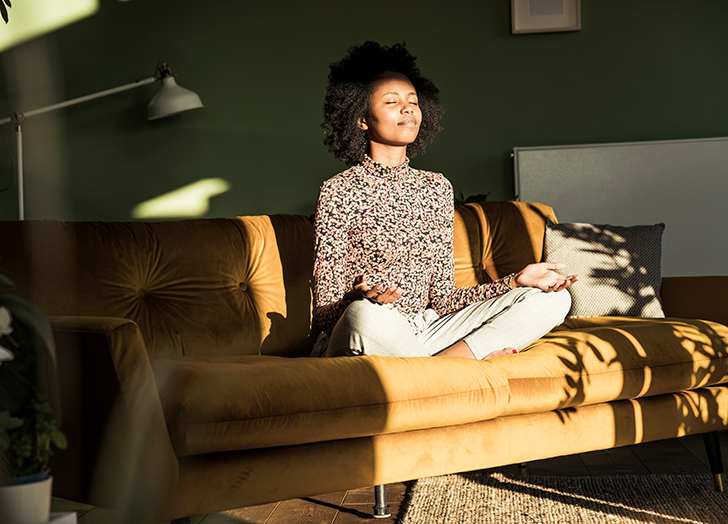 3 More Ways to Calm Anxiety in a Hurry

1. Focus on Your Breath

“I recommend sitting quietly, upright and focusing on your breath to feel present in the moment,” says Irina Firstein, LCSW, a licensed individual and couple’s therapist. “As soon as thoughts come in, focus on the breath again,” she says. This is a form of mindfulness meditation, and Firstein recommends doing it for at least ten minutes to truly feel the benefits. Science also supports this approach; researchers at Johns Hopkins University found that mindful meditation can help ease symptoms of anxiety and depression. Not super keen on sitting in silence? You can also use a guided meditation app like Headspace or search YouTube for guided meditation tracks to get started.

2. Describe Your Surroundings in Your Head

If you feel sudden panic strike, try to observe your surroundings and start describing things—in your head—in increasing detail. For example: There’s a chair. It has four legs. The legs are wooden. The cushion is embroidered. The embroidery is blue and white. It has white stitching. Whether it’s a chair or a book cover or a cute puppy, the idea is that the more you focus on describing something, the less you focus on freaking out. The more of your brain you’re using to think of words to describe a golden retriever, the less of your brain you’re using to think about any negative thoughts swirling around your head.

A study published in the Journal of Personality and Social Psychology asked participants to jot down a few sentences each week, focusing on specific topics. One group wrote about the things that they were grateful for that week, a second group wrote about the things that had displeased them and a third group wrote about things that had happened (neither positive or negative). After ten weeks, researchers found that those who had written about gratitude were more optimistic and felt better about their lives than the other two groups. Not only that, but they had also exercised more and had fewer visits to the doctor. So grab a notebook and try to jot down a few things that you’re thankful for each week. Hey, even no traffic on your daily commute is a win in our book.

10 Journal Prompts for Mental Health That May Help You Cope