The 72-year-old Duchess of Cornwall celebrated the 25th anniversary of her patronage, Emmaus Greenwich, with a visit to the charity’s Plumstead shop that included a meeting with well-wishers, volunteers and staff. She also took power clashing for a spin and paired a purple and green tartan skirt suit with a pink, purple, grey and aubergine geometric scarf. 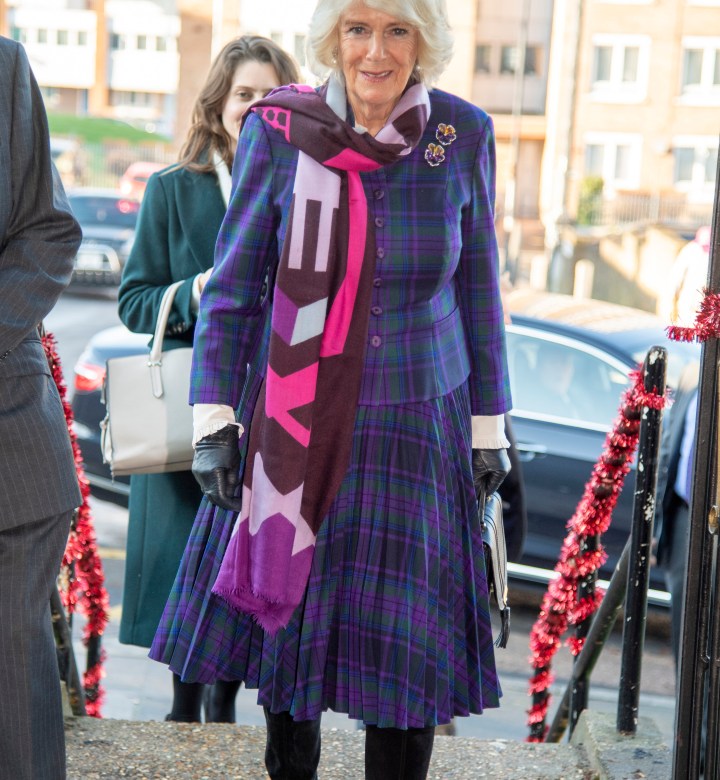 The duchess donned a white blouse underneath her skirt suit with a ruffle trim at the neck and sleeves. To fend off the cold weather, she also selected black lambskin leather gloves and black suede knee-high boots. She even leaned into her power clashing a bit more and completed her look with a pair of purple and yellow pansy brooches. It also appears she carried the Chloé Marcie mini satchel bag ($1,290) in black. Chloé is an unexpected (and rather fashionable) choice for Camilla if we do say so ourselves!

But her outing wasn’t all power clashing and surprising purses. Some royal fans speculated that her decision to wear the color purple was meant to convey that she’s ready to rule. Purple is traditionally associated royalty, nobility and power, after all. And she and Prince Charles were instrumental in last night’s NATO reception at Buckingham Palace. Another secret message purported to be included in her outfit? According to the Express, pansies are meant to communicate love and dedication. If that’s to be believed, then Camilla could potentially be showing her commitment to Prince Charles even when they’re not together.