I’m Not Toxic, You Are 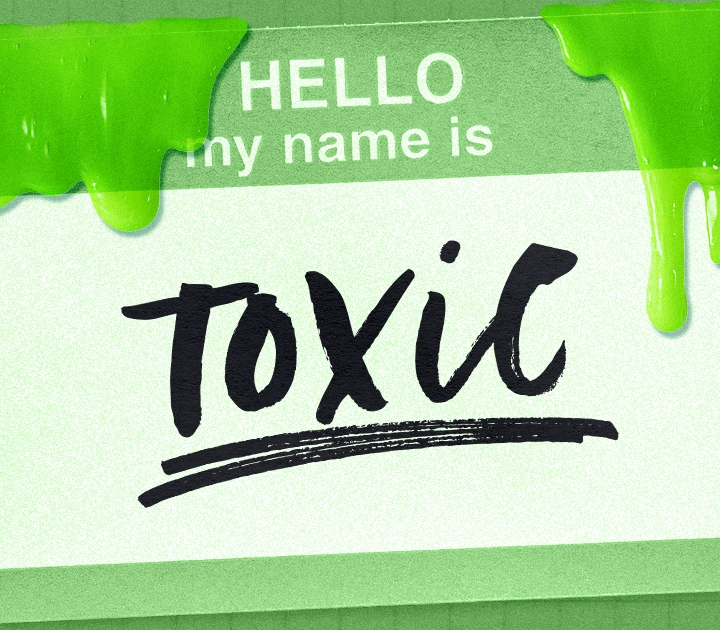 “That’s so toxic,” I say after my friend tells me about her chaotic workplace environment. (Texts after 11 p.m.? Emergency weekend meetings? Gatekeeping, gossip and girl bossing? Toxic.) Or did I say it in response to my husband explaining the latest season of Love Is Blind? (I can’t watch—the second-hand embarrassment is too toxic). Or maybe it was as I pounded my fists towards the heavens when my iPhone inexplicably launched into that free U2 album from 2014. (That was so toxic of Tim Cook.)

Whether it’s brain-eating amoebas or old classmates getting in touch over Facebook to “get fit,” file it under: toxic. The air I breathe, the relationships that don’t work, the disgrace of being in Boarding Group 9—the common denominator? It’s all toxic waste that I, a faultless ingénue up to her knees in radioactive muck, must wade through.

Toxic was the Oxford Dictionary’s Word of the Year 2018, essentially the equivalent of the Miss America, but for words. Per the publication: “The Oxford Word of the Year is a word or expression that is judged to reflect the ethos, mood, or preoccupations of the passing year, and have lasting potential as a term of cultural significance.” An adjective, it’s defined by Merriam Webster as 1. “containing or being poisonous material especially when capable of causing death or serious debilitation,” 2. “exhibiting symptoms of infection or toxicosis,”; 3. “extremely harsh, malicious, or harmful,” or 4. “relating to or being an asset that has lost so much value that it cannot be sold on the market.”

Then, it was the word we needed to explain where we found ourselves. But now, the word is having its Anne Hathaway moment, overexposed, by no fault of its own beyond being great at what it does. Naiylah Warren, LMFT, Therapist and Clinical Content Manager at Real agrees that the word is overused. So how the hell am I supposed to explain the slow and preventable rot of everything on this mortal coil without using my favorite word?

I asked Warren for alternatives to use at least when describing relationships. She suggested the word dysfunctional if a relationship isn’t functioning or meeting the needs of those involved. “I would also recommend words like ‘unproductive,’ ‘struggling’ or even ‘under construction.’” These are great suggestions, but they imply that said dysfunction is a two-way street when clearly I’m not the toxic one. But Warren cautions against labeling others as toxic (ugh) since it causes us to make character judgments as opposed to behavior judgments. “It’s the difference between who you are and what you did,” she says. Once we make character judgments that a person is toxic, we start to see the person as “bad” or irredeemable.

It feels powerful to label someone or something toxic and call it a day. There’s a justice to it. If you’re toxic, it means you’ve not only done me wrong, but you’ve gone bad, spoiled like milk, and I can sever you from my life without batting an eye—at least that’s what a 12-year-old expert in power dynamics on TikTok informed me. Cut the mold from the block of cheese, light the match and don’t look back.

But Warren suggests we examine our reactions more. “This doesn’t mean that everyone is a good person to be around or to have in your life; but this stance can dismiss us of any accountability or responsibility to actually address our own behavior or contribution to a ‘toxic’ dynamic,” she says. Instead of brandishing something toxic, can we take it as an opportunity to engage in self-study of our “shadow selves” as she calls them: “[Reflect] on moments when you’ve been the version of you that you’re least proud of. Is it when you’re angry? When you feel abandoned? When you feel rejected or ignored? How do you behave? When does that shadow self come out?”

So let me get this straight. You’re telling me I’m part of the problem? That I’m sweeping my deeper, more complex emotions under the rug so I can ignore them and instead just blame everything around me? Huh. That’s fine and all, but ultimately it is toxic that my friend’s boss drunkenly FaceTimes her mid-martini number three. Love Is Blind is built on the shoulders of several toxic frameworks—ableism, heteronormativity, reality television etc. Tim Cook has publicly stated that he knew it was wrong to automatically place Songs of Innocence onto 500 million iPhones unbeknownst to users, and Tim, I gotta say that’s hella toxic behavior bruh. And you know what? Maybe it is freaking toxic how much I use the word toxic instead of exploring the nuance of each situation. But I guess I am just an unhinged toxic monster.

My Future Mother-in-Law Keeps Calling Me Fat, So I Asked a Therapist How to Handle It