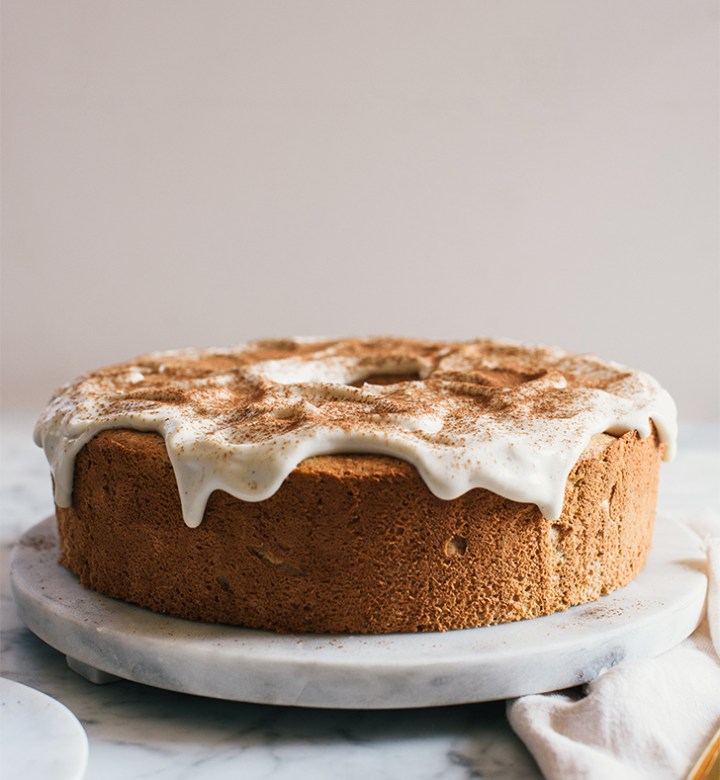 “Usually, angel food cake is just egg whites with a small amount of flour to set it,” the author of The Fearless Baker tells us. “This also has pumpkin.” Be still our hearts.

“I packed as much as I could into it to make it really pumpkin-flavored without ruining the light, airy feeling of an angel food cake,” she continues. “This cake doesn’t rise as tall as a traditional angel food cake does, but it still has that angel food texture.”

Just be as gentle as possible when folding the egg-white batter into the pumpkin puree so that you don’t knock out all the air (and wind up with a sad, stout cake).

“Because we’re breaking all the angel food cake rules,” McDowell says, “this also has a thick cream cheese glaze. You can drizzle it over the whole thing or you could even serve it on the side and let everyone drizzle their own. It has a little bit of tang from the cream cheese that complements the pumpkin so well, plus all those flavors of pumpkin spice, which everybody loves.”

We’re in love with this cake and we’re not afraid to admit it.

1. Preheat the oven to 350°F. Place an ungreased angel food cake pan on a baking sheet.

2. Make the Cake: In the bowl of an electric mixer fitted with the whisk attachment, whip the egg whites and cream of tartar until they become white and frothy, about 2 minutes. Add the sugar in a slow, steady stream and continue to whip to stiff peaks. The meringue should be smooth and glossy. Add the vanilla.

3. In a medium bowl, sift together the cake flour, cinnamon, ginger, cloves and salt. Gradually sprinkle a small portion of the flour mixture over the meringue and, using a silicone spatula, fold in gently to incorporate, repeating until all the flour mixture is incorporated. Do not overmix.

5. Gently spoon the batter into the prepared pan and spread into an even layer. Transfer to the oven and bake until the top is golden brown and the structure is set (it will spring back lightly when touched), 35 to 40 minutes.

7. Make the Glaze: In a medium bowl, mix the cream cheese with a whisk until it’s light and fluffy. Add the confectioners’ sugar, cream and vanilla; mix to combine. The glaze should be thick but drizzle-able. If it’s too thick, add more cream or milk 1 teaspoon at a time until it reaches the desired consistency. Drizzle the glaze over the cake and garnish with pumpkin pie spice, if desired.