What Exactly Is Sun Poisoning? We Asked an Expert 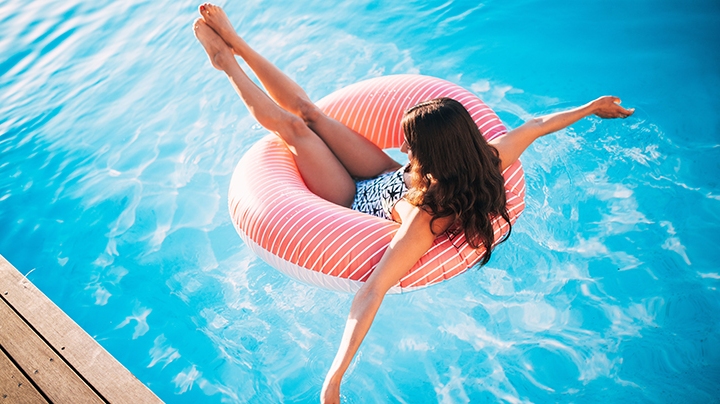 Before last month, I had no idea what sun poisoning was. That all changed during my recent trip to Hawaii when I unexpectedly became an amateur expert on the subject.

It all began on my third day in Maui. I spent several hours outside soaking up the rays, so I rinsed off in the shower to ensure I’d be SPF-free before crawling into bed…and that’s when I felt it. And by “it,” I’m talking about sun poisoning (aka sun rash).

It started with a few small bumps on the back of my neck that were slightly itchy and hot to the touch. No big deal, I thought, especially since I have a grocery list of diagnosed food allergies that give me trouble on a daily basis. But it didn’t take long for me to realize that this was different from my average hive. By the next day, the bumpy rash had spread to my stomach, arms and legs. Crap.

After making a few calls, I soon learned that I had what is commonly referred to as sun poisoning. Basically, it’s an extreme case of sunburn.

There’s no way, was my first thought. I had put on sunscreen like I was supposed to. Looking back, I now realize that I was in denial, because the thought of avoiding the sun in Hawaii was imperceivable. But the diagnosis made sense. The only areas that weren’t affected by the rash were—if you must know—the skin that was covered by my bathing suit, and my face, which was shaded by a hat.

I immediately tried to research sun poisoning on Google, which was no help whatsoever. Not only were the results really terrifying, but there was also no definitive answer about what I should do.

That’s when I turned to skin expert Paola Campos, who explained that sun poisoning is nothing to panic about. However, there are some important things to keep in mind, like what causes it? And can it be treated at home? Keep scrolling for our Q&A.

What Is Sun Poisoning?

“Sun poisoning is not a formal medical term, but it is well known and commonly associated with high levels of sun exposure and sunburns. It looks like an allergic reaction, and in severe cases, you may feel like you are fighting a bad flu,” says Campos.

What Causes It To Happen?

“Sun poisoning is most common among people with a lighter skin type and hair color, but it can also occur if you have a pre-existing condition such as lupus, if you are taking antibiotics or if you’re using a topical medication that causes you to be sensitive to the sun (photosensitivity),” she says. “Also, being in contact with certain wild plants can make the affected skin react to UV rays.”

What Are The Symptoms?

“We all know what a sunburn looks and feels like, but then the situation takes a turn. When you get sun poisoning, the skin is very hot, red and sensitive, and you develop a rash that is bumpy, very itchy and may be painful. Your skin may become swollen and can even blister,” Campos explains.

“You should always try to prevent sunburns and sun poisoning, but once the damage is done, treatments include avoiding further direct sunlight, taking cool showers or baths and applying cool compresses,” she says. “Make sure you are drinking extra water. Keeping your body hydrated is very important and will reduce the chance of severe symptoms. If you are experiencing mild pain or discomfort, you can take ibuprofen or apply hydrocortisone gel.”

Do You Have Any Diy Treatments?

“One of my favorite things to apply to itchy, irritated skin is a homemade oatmeal mask. Blend a cup of 100 percent whole-grain old-fashioned oats into a powder, add distilled water to make a pancake batter consistency and slather it on. Leave it on for about ten minutes and remove it with a damp towel. You can also cut an aloe vera plant and apply the gel to clean skin. Hydrocortisone cream, cool baths and cool compresses will also help reduce the itchiness,” says Campos.

What Is The Recovery Time For Sun Poisoning?

“Recovery time varies on a case-by-case basis. The rash itself can last anywhere from three days to two weeks. Redness, pain and itchiness can last three to ten days. The rash is usually last to go away,” she says.

When Do You Recommend Seeing A Doctor Or Dermatologist?

“If you begin to experience fever, chills, nausea, headache, dizziness, lightheadedness, dehydration and even shortness of breath, please seek medical attention. These are examples of severe symptoms,” says Campos.

“Given the fact that your skin is highly sensitized and reactive, it’s best not to apply makeup on the rash. Doing so could increase sensitivity and discomfort and may prolong healing. Also, given the skin’s texture during this time, you may find it challenging to get a nice, smooth and even application,” she says.

How Long Do You Recommend Avoiding Sun Exposure?

“It’s best to stay out of the sun for a minimum of two weeks,” Campos advises. “In the meantime, wear UV-protective clothing or a high-quality broad-spectrum (UVA and UVB) sunblock with SPF 30 or greater. Given your skin’s impaired barrier function, a physical sunscreen (zinc oxide) is preferred. Sunblock should be applied 15 minutes before sun exposure (this includes driving or sitting next to a window) and reapplied every two hours. Once your skin has healed, continue to apply sunblock daily. This helps you develop a lifelong healthy habit (UV rays are a known carcinogenic) and will help you prevent further sunburns and sun poisoning episodes.”

wellness
by Destinee Scott
Score 25 Percent Off a Cult-Favorite Intimacy Oil During This Foria Sale (Just in Time for Valentine's Day)
wellness
by Sarah Stiefvater
Is CBN the New CBD? Everything You Should Now About This Trending Cannabinoid
wellness
by Jaime Wright
What Would You Take in the Divorce, According to Your Zodiac Sign
wellness
by Emma Singer
26 Second Date Ideas That Are Anything but Awkward
wellness
by Jaime Wright
2023 Is the Year of the Rabbit: Here’s What It Means
wellness
by Rachel Bowie
The 7 “Issues” All Couples Have While Watching TV Together (You Know Who You Are)