How One Bride Saved $3,500 on Her Wedding Video with This Ingenious Hiring Trick 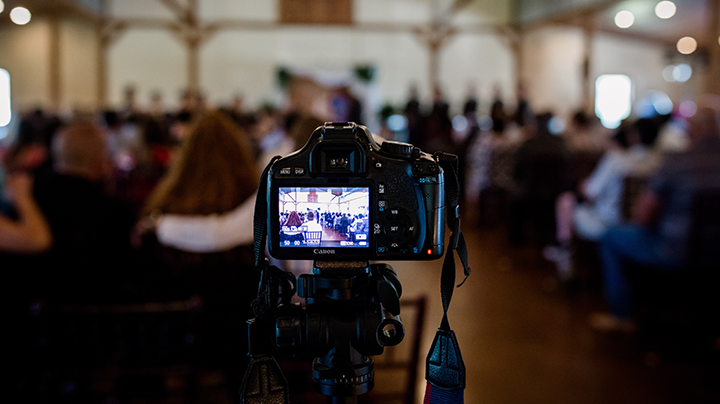 When it comes to money-saving wedding tips, there are the helpful ones (pay your vendors in cash to avoid taxes) and there are the ones that don’t really move the needle (borrow a veil to save $150). But we recently heard about a wedding budget hack that goes beyond skipping the florals and cutting the passed apps: Find yourself a recent graduate to be your videographer.

We learned the tip from a friend who actually did it. Heidi got married this past summer in Brooklyn, where vendors are notoriously expensive. While having a videographer fell into the “nice to have” bucket of priorities for her, the more she thought about it, the more she really wanted her nuptials to be filmed. “I spend hours watching old home videos, and my wedding definitely felt like an occasion that I could one day look back on—or force my future kids to watch against their will,” Heidi explained.

She and her fiancé researched videographers through normal channels like Google and Instagram only to find prices that put them well over budget. “The range was between $5,000 and $10,000. And that was more than my photographer and florist combined!”

But three weeks before the wedding, Heidi realized that with all of her vendors paid, she had around $1,500 left in her wedding fund.

It wasn’t enough to hire anyone they came across during their initial search, but that rate wasn’t chump change. “I thought it was a reasonable amount to pay for basic video coverage,” Heidi said.

She returned to the internet one last time. But this time, she went straight to Craigslist. “I typed in ‘wedding videographer’ and emailed the first three legitimate-looking results,” she told us. “The first person to reply was a recent film grad who was available and within our budget because he was just starting out and trying to grow his business.” As a bonus, the videographer also wanted to bring along a second shooter to be able to show future clients what they can get with two cameras. Talk about a score. For $1,500, plus transportation, Heidi and her fiancé landed two shooters, eight hours of coverage, 50 minutes of footage and an edited highlight reel. Best of all? Heidi received everything they promised four days after she and her now-husband said “I do.”

Yep, it was that easy. But if you’re considering doing the same, we recommend taking your time to ensure you’re paying for legitimate services. Do your research to confirm you’re communicating with a real person: Consider checking out their social media presence and getting a reference from someone they’ve worked with before. Make sure they’ve filmed similar events—especially weddings. While someone who’s never done a wedding might offer a great deal, do you want to risk inviting a 21-year-old you don’t know to an open bar? That’s what we thought.

In Heidi’s case, her videographer was a recent grad, but he had a digital footprint and a website with a couple wedding reels he’d already created. If you’re working with someone a little greener, you should consider drawing up a contract with stipulations regarding time spent filming, when the footage must be delivered by, how much you’ll get, and how many revises you can ask for before another fee kicks in.

As for regrets, Heidi has just one: “I wish I’d thought more about what exactly I wanted captured and communicated that to him. There’s a lot of me and my husband in the footage, which is great, but I wish there was a little more of my family and friends. Still, he did a wonderful job capturing the best parts of the night.”

A picture may say a thousand words, but a videographer who’s a recent grad can save you a few thousand dollars.

How to Plan a Wedding on a Budget