Last week on Killing Eve, Villanelle (Jodie Comer) taunted Eve (Sandra Oh) out of jealousy and sank her claws into Eve’s marriage. In season two, episode four, titled “Desperate Times,” we see what happens when Konstantin (Kim Bodnia) and Villanelle branch out on their own. Hint: It’s messy. 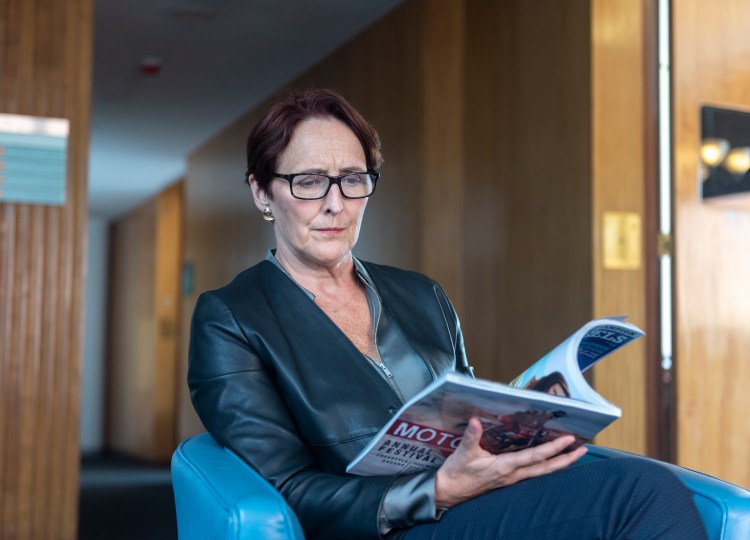 We open on Carolyn (Fiona Shaw) looking gravely uncomfortable in a corporate office reading a motocross magazine. After a bit, she’s told she can go in to meet with Helen, her boss. Helen is noshing on Pringles and reprimands her for her team’s recent screw-ups (Konstantin escaping with Eve, among other things). Helen tells Carolyn she thinks it’s time to shut Operation Mandalay down (aka Eve’s mission), but Carolyn refuses. She insists that everything is going according to plan, in fact, she guarantees it. Helen talks her word for it and Carolyn promptly leaves.

Back at the MI6 offices, Hugo (Edward Bluemel) regales Jess (Nina Sosanya) with a story about a woman he’s seeing who’s an annoying but hot vegan. They stop chatting when they walk into the office and see that it’s absolutely covered in paperwork. At the center of it all is Eve with one of those quintessential investigatory boards with photos and news clippings. All that’s missing is the red string.

She says she’s been working on finding the Ghost all weekend and brushes off Villanelle’s name when Hugo mentions her. Jess asks her to catch them up and she does. Last week, Alistair Peel’s godson died of a heart attack in his office. (Remember that cleaning lady who switched out his coffee cup in the season two premiere?) So, Eve looked into Alistair’s relationships to see if anyone else in the Peel friends and family tree has died recently. Turns out, his CEO died from insulin-related issues ten months ago and his girlfriend died of anaphylactic shock six months ago. How did MI6 manage to miss this? The deaths weren’t suspicious. Now, it’s time they meet with Peel’s son, Aaron (Henry Lloyd-Hughes), before he meets an untimely demise. 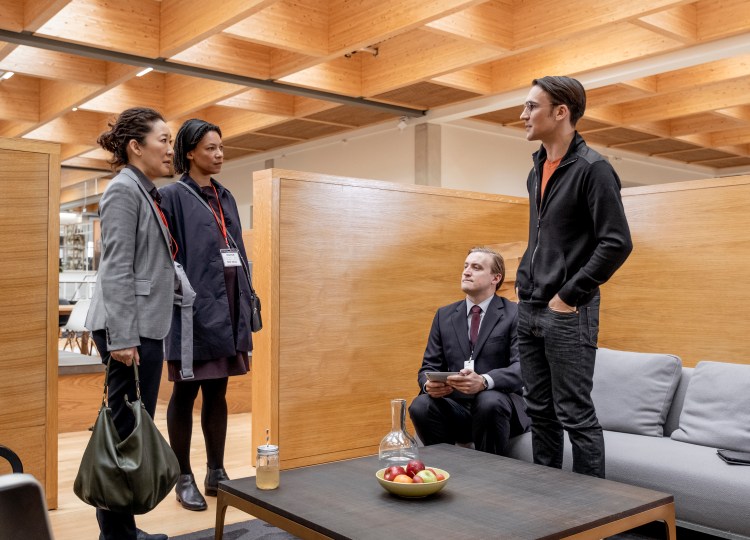 Eve and Jess head to Aaron Peel’s very Google-ish office and break the bad news to him—everyone around the Peels is dying. They bring up the sale of his family’s company and the fact that many of their colleagues have perished during it. He rings a lawyer who renders the conversation essentially meaningless with his repetition of “Mr. Peele declines to answer.” After Aaron’s terribly rude demeanor, he goes on to tell them that secret services like the MI6 will be defunct thanks to his company sooner rather than later. 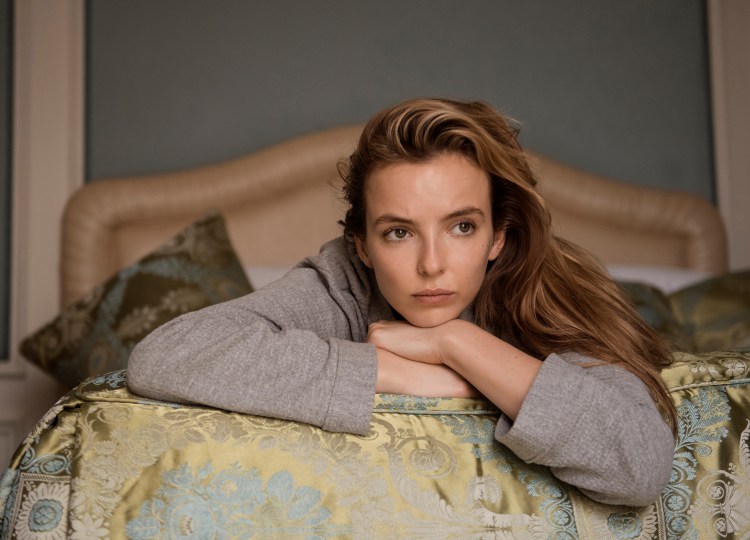 Meanwhile, Villanelle and Konstantin are in Amsterdam plotting their next move. He has a job for her—a boring one—that evening, but until then he wants to show her a museum. While there, she yells at the top of her lungs how boring she finds museums. But then, she sees two things that catch her eye: a depiction of Adam and Eve and then a gruesome death scene she’s just dying to recreate.

Afterward, Villanelle sits at a coffee shop where she yells at a girl and tells her to get a real life when she asks to take a photo of her. Then, she smiles wistfully at a nearby family and writes Eve a postcard with a photo of that macabre death scene we saw earlier. 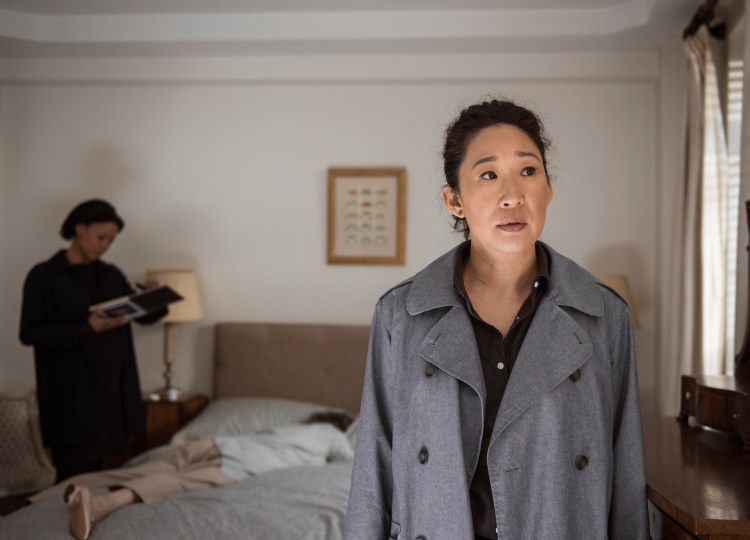 Back in London, Eve and Jess wonder if Aaron Peel is behind his father’s death. But before they can get too far along in their hypothesizing, Kenny (Sean Delaney) comes in and tells them Alistair Peel’s secretary is dead. They visit the scene of the crime and see that she died as she was bleaching her mustache (ouch).  Eve then realizes that the Ghost never leaves blood. 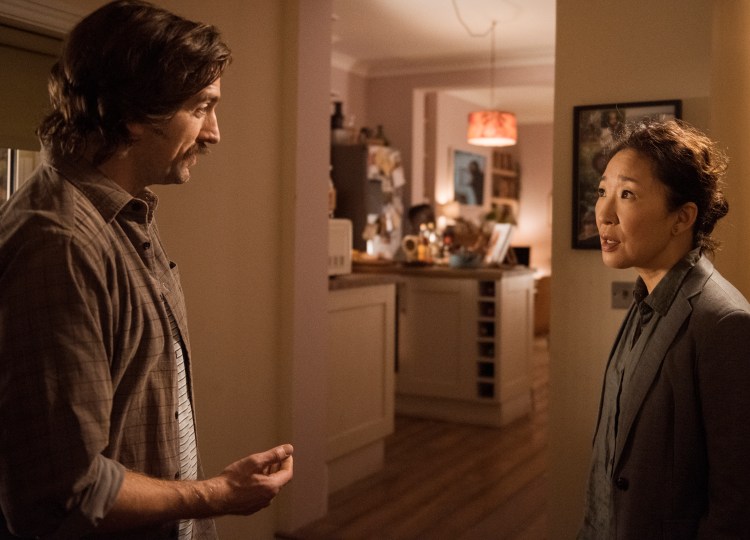 When Eve arrives home, Niko (Owen McDonnell) is sitting in the kitchen with their new security guard…who Eve totally forgot to tell him about. Whoops! He’s miffed and then Eve’s miffed that he’s miffed. When she gets defensive and tries to claim that this is normal MI6 protocol, he tells her, “None of this is normal and having a wife who tries to gaslight me into thinking that it is isn’t normal either. And it isn’t kind.” He’s right, so she tells him she needs to go upstairs to finish some work to avoid the situation. But before she does, he changes tactics and tells her she’s the best person he’s ever known. They’re going through a rough patch, and an apology on Eve’s part doesn’t seem to be on the horizon. 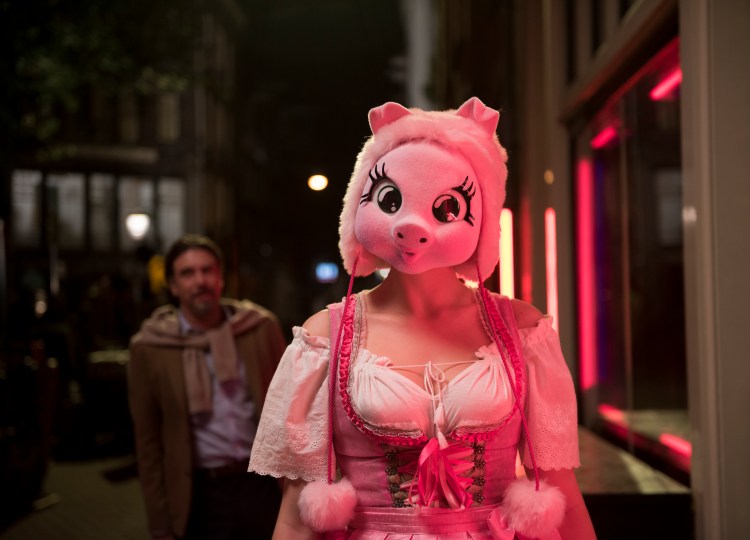 Feeling abandoned by Eve, Villanelle decides to go big for her next kill. She dons lederhosen and a pig mask. Just as she suspects, her target follows her right into the brothel she’s pretending to work at. Inside, she gets them started with some restraints, opens the curtains out to the street and then hangs him from the ceiling by his feet. She wants to humiliate him, and she easily accomplishes that when his wife stops outside the window and sees them. A crowd gathers to egg her on; they assume it’s fake. And then, she slits his belly and puts a pig mask over his face, just like the painting. We’ll file that away for our nightmares.

Afterward, Konstantin asks Villanelle how that particularly ostentatious murder felt. She essentially says it was boring and asks when they can go back to London. She wants to be near Eve again, but Konstantin says Eve doesn’t care about her anymore.

At MI6, Carolyn intercepts Eve’s mail and snags the postcard from Villanelle for herself. Once the mailroom clerk leaves, she makes a call to someone and speaks Russian. Then, she makes a show of asking Jess to go to Amsterdam to investigate a “bit of a butcher shop” of a murder (aka Villanelle’s work). Eve asks if it has anything to do with Villanelle, and Carolyn shoots back a question about how the Ghost investigation is coming. The answer? It’s going. Carolyn suggests she focus on the task at hand. 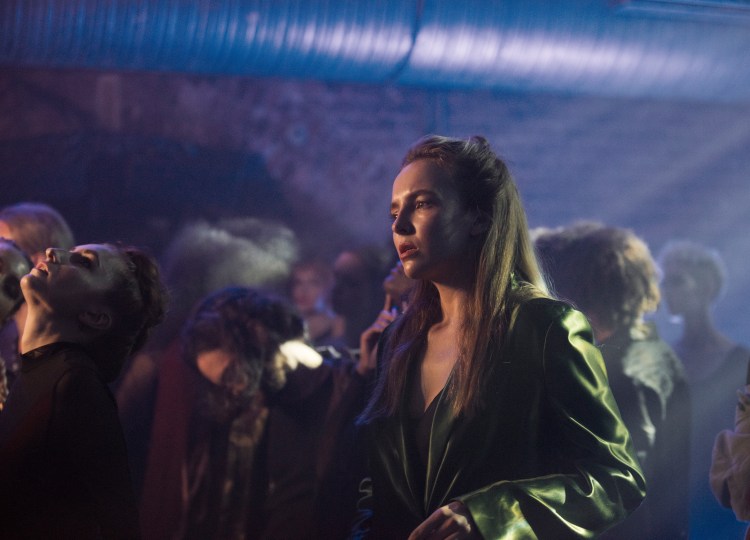 While Jess is away, the search for the Ghost heats up. The toxicology report comes in and it shows that she put poison and an inhalational anesthetic in Peel’s secretary’s mustache bleach. It’s clever and painless, leading Eve to surmise that she’s a nurse or doctor. She asks the team to run a search for women fitting that criteria who are also cleaners at Peel’s company. Hugo, for once, is impressed.

Villanelle, meanwhile, is staking out the scene of her crime in hopes of catching a glimpse of Eve. When Jess shows up instead, she’s incensed. So much so that when a man offers to sell her drugs, she takes him up on it. She blows off some steam at a club later and when she spots a woman that looks like Eve she takes more. Her inhibitions gone, she nearly strangles a girl in the bathroom for cutting in line. Thankfully, Konstantin swoops in and drags her out of the club.

The next morning, Villanelle wakes in a bed stained with her vomit and Konstantin snoring on her floor. She looks at herself in the bathroom mirror and cries, proving she does have emotions…maybe. 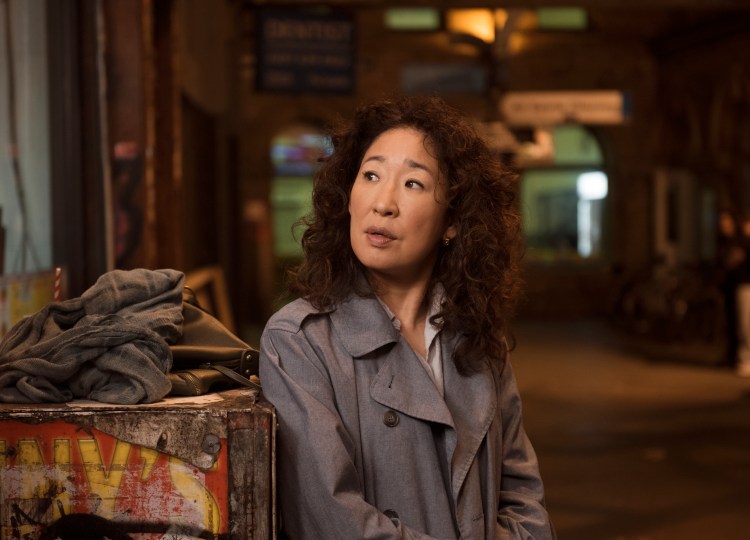 Back at MI6, Kenny is still poring through the database looking for a potential culprit. It’s 1 a.m. and Hugo announces that he needs food. Eve reluctantly joins him, and they share, for the first time, a meaningful conversation. He asks her what the deal is with her and Villanelle and she answers honestly: “I don’t know.” He presses on and asks if Villanelle “fancies” her and that’s where Eve draws the line. She tells him not everything is about sex, but he disagrees. He continues, saying, “What is it? Do you like watching her or do you like being watched?” Her reply? “Both.” They move closer, close enough to kiss, and then Eve’s phone buzzes with the news that Kenny “found her.” That was a close call.

The next day Eve follows the Ghost as she drops her children off at school. Eve corners her by asking if she dropped some money. Soon, the woman realizes there’s a sniper target on her head. She agrees to go with Eve for questioning.

Do they have the right woman? What will Villanelle do to get back at Eve for ignoring her? And was Eve’s almost kiss with Hugo an isolated incident? All that, we hope, will be revealed when Killing Eve returns with season two, episode four at 8/7c on BBC America and AMC.

BBCAmerica Just Made a Major Announcement About ‘Killing Eve’ Season 3