In last week’s episode of Killing Eve, Villanelle (Jodie Comer) played nice enough with Aaron Peel (Henry Lloyd-Hughes) to get an invite to Rome. Eve (Sandra Oh) got into some romantic entanglements of her own while surveilling them, and Niko (Owen McDonnell) found himself in a rather uncomfortable situation.

Now, the moment we’ve been waiting for is here: the season two finale. Who will come out alive? 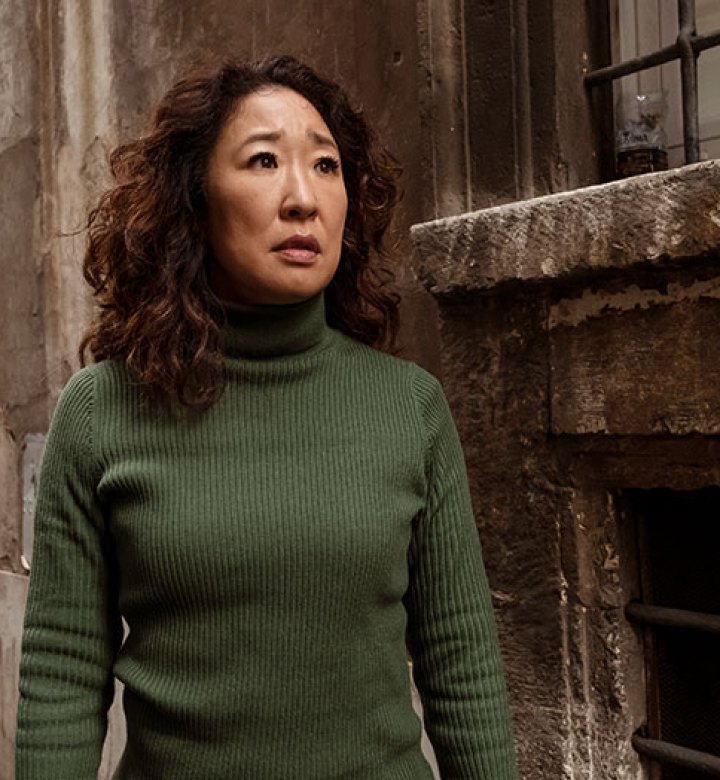 Villanelle wakes in Aaron’s palazzo and gets up to do some exploring in her pajamas. She finds a door open that was previously closed and walks in on a bank of computers. She sees her name on the screen and begins to watch a series of videos Aaron has captured of her during her stay. There are other names, too, so she clicks on one and sees footage of a young woman that looks eerily similar to her being murdered. She’s mildly surprised and maybe even a little worried, but it doesn’t stop her from dressing and going to breakfast with Aaron.

At the table, Villanelle asks him if they’re going out today and he replies that they are. But first he has to research some clients coming to visit. She asks if she can see them and he shows her a picture of—wait for it—Raymond (Adrian Scarborough). This is definitely a reason to use the safe word because, remember, Raymond wants to kill her for leaving the Twelve high and dry. So, she says, “What a strange looking gentleman.” 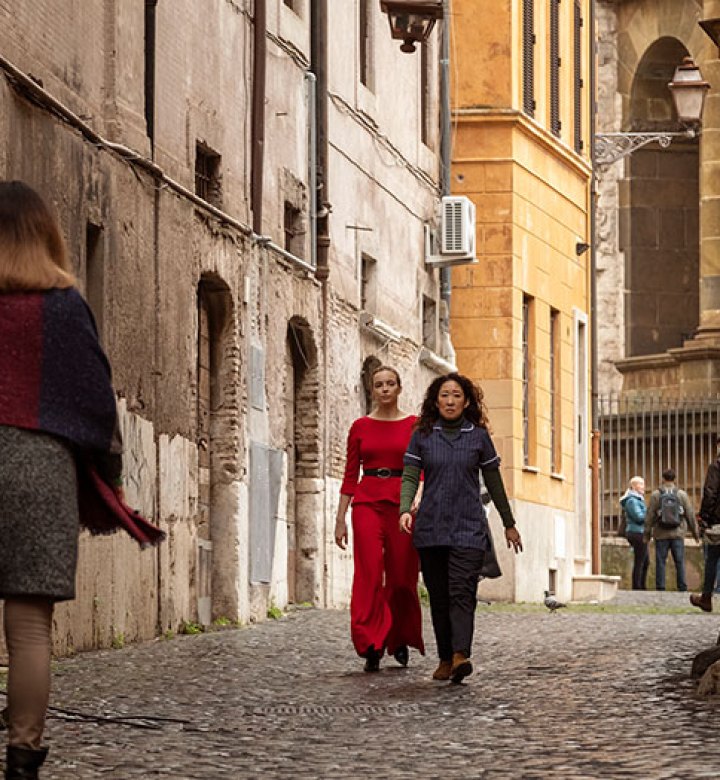 The moment Eve hears Villanelle say the safe word she also hears Hugo (Edward Bluemel) being assaulted in the hallway. A man breaks down her door but she’s able to hide under the bed before he finds her. Once he leaves, she goes out into the hallway to find Hugo wounded but alive. Instead of staying with him or calling for help, she rushes out to help Villanelle…but not before one of the hit men mistakes her for a hotel employee and asks her on a date. That gives her an idea. So, she changes into a maid’s uniform and simply walks into the palazzo’s staff entrance.

Once inside, Eve hears Villanelle laughing and bounds into the dining room. Aaron recognizes her immediately and Villanelle says hello to Eve in her normal accent. Aaron is only partly surprised and says he thought he smelled a rat, but he didn’t expect this. Eve is annoyed that everyone seems to be in one piece and says she thought Villanelle needed help. 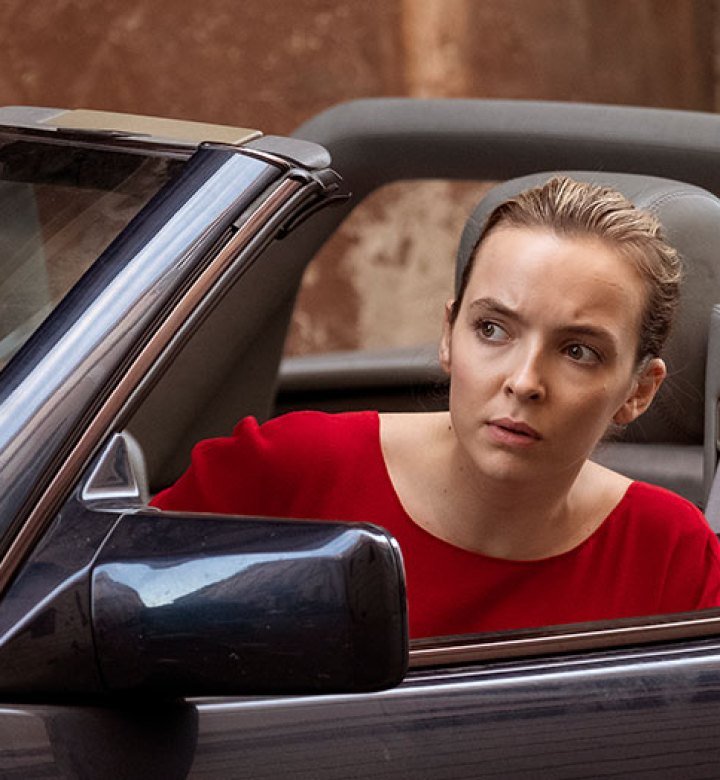 Villanelle retorts that she does need help. Aaron makes movies that don’t have the happiest of endings and then there’s the whole Raymond thing. Aaron is strangely charmed that she’s seen his movies and wasn’t repulsed. He asks her to come work for him (she does love money) and help him achieve his wildest cinematic dreams. He promises she’ll never get bored again if she works with him and that he’ll give her everything she could ever want. Villanelle is tempted, or at least appears to be.

She clocks a knife on the table and asks if he wants her to kill Eve. He nods yes and says he’d like to watch. Villanelle gets up from the table, acting like she’s going to do it then slits Aaron’s throat and turns him to the mirror so he can watch himself die. He smiles, we shudder. 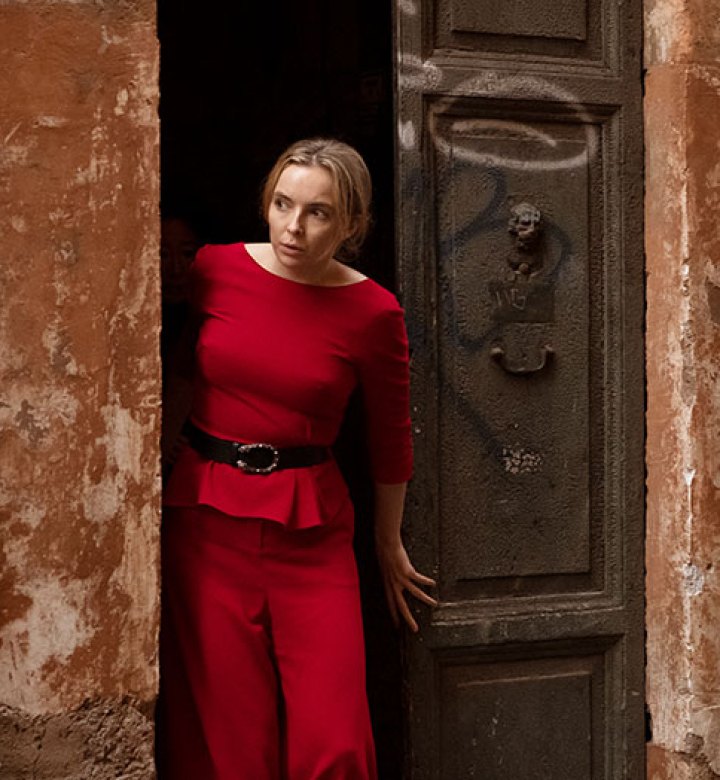 With Aaron dead, Eve starts to panic and asks herself why she even came to Villanelle’s rescue. Villanelle says she needed saving and Eve saved her, simple as that. But they have bigger problems: Raymond is on his way. Villanelle gets herself and Eve out of the palazzo by telling the guards she’s borrowing a maid to go shopping and that Aaron wishes to be left alone. Once they’re safe, Eve insists they go back to the hotel to get the surveillance tapes. She wants proof that there was a reason Villanelle killed Aaron. Villanelle tries to convince her otherwise but ultimately agrees to get a car and meet her in front of the hotel in five minutes.

When Eve arrives at the hotel, she notices that Hugo is no longer there and his blood has been cleaned up (not a good sign). Her room has been completely stripped and the tapes are gone. Then there’s a knock on the door and it’s Carolyn of all people. She tells Eve to fill her in on the situation, then asks who killed Aaron. She admits it’s a little messier than she’d like, but it works just as well. 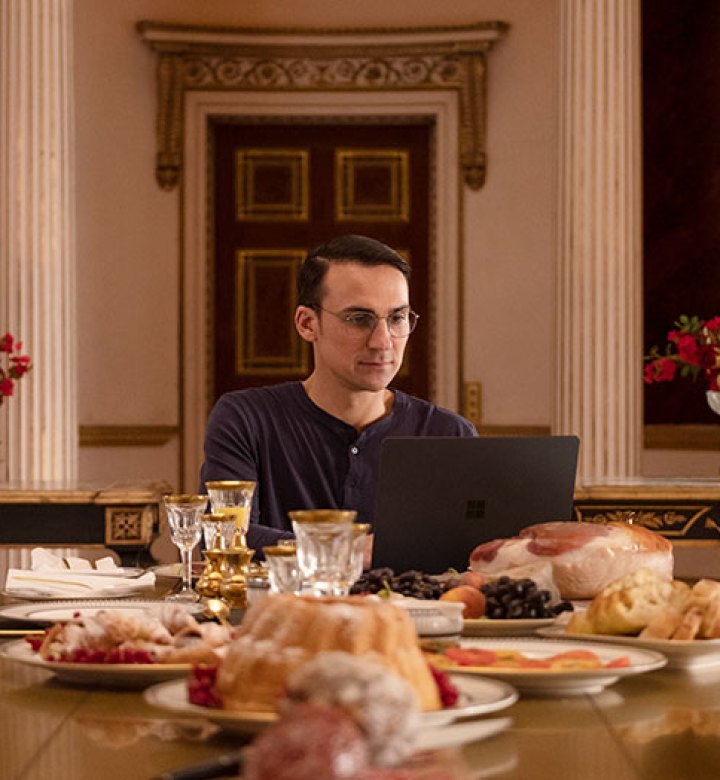 It’s then that Eve realizes Carolyn actually wanted Aaron dead. The whole operation was a way for MI6 to frame the Twelve for Aaron’s murder. Eve and Villanelle were just pawns. Every dangerous idea Eve had was manipulated by Carolyn. As if nothing’s wrong, Carolyn tells Eve it’s time for them to go, but Eve says no. She threatens to tell Kenny everything Carolyn has done, and Carolyn laughs, saying that he already knows everything. He was part of the clean-up crew. Now it’s all coming together.

While Eve and Carolyn have their chat, Villanelle looks for a car. She finally comes upon one that’s unlocked and looks up to see Konstantin (Kim Bodnia) is the one who clicked it open. He brought her a getaway car with a gun and everything. All she has to do is leave Eve behind, he tells her. He also informs her that Raymond was under orders to kill her after she killed Aaron. Konstantin tipped him off in exchange for details about his family’s whereabouts. Although he almost betrayed her, Konstantin urges Villanelle to leave. But she says she won’t do so without Eve because they’re “the same.” As she turns to go, she vows to find Konstantin and his family, presumably to kill them.

After her exchange with Konstantin, Villanelle waits for Eve in front of the hotel and grows concerned when she doesn’t come out. She grabs the little gun Konstantin left her and walks in to see Raymond standing in the hallway outside the rooms with an axe. Typical. She calls him a drama queen and asks him why the Twelve would send him to talk to Aaron when he’s a nobody. Before he tries to kill her, he reminds her that Eve is still in one of the rooms. He says if she can guess which one she’s in, he’ll let Villanelle keep Eve. If not, he’ll kill them both. They fight, and he starts choking her. 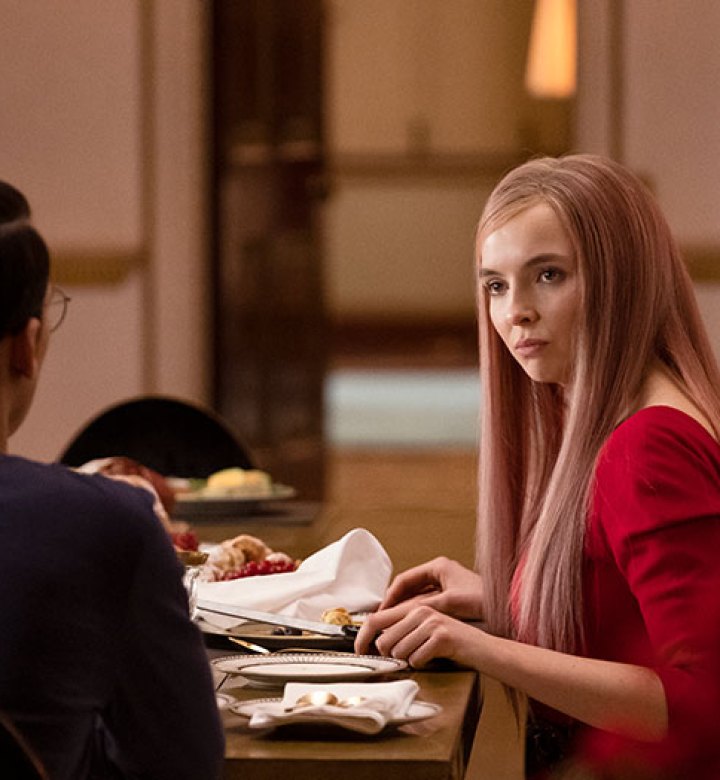 Hearing the scuffle, Eve comes out of the room and sees the axe Raymond so carelessly set down. She threatens to hurt him with it, but he doesn’t believe her. Villanelle is close to passing out so Eve goes for the gold and axes Raymond in the back. After she composes herself, Villanelle insists that Eve finish the job with a final blow to the head. She says the Twelve will come after them for what they’ve done. Suddenly, violently, Eve cleaves him once, then again, until Raymond is dead.

Eve is in shock, so Villanelle ushers them out the back door of the hotel and breaks into an enclosed tunnel so they can travel undetected. Villanelle tries to reassure Eve as they walk. “It’s OK if you feel weird. You just killed someone for the first time—with an axe,” she jokes.

Eventually they find an exit and Eve violently breaks the door down while Villanelle watches in mock wonder. They ascend a staircase that leads into a stunning collection of ruins. Acting like they can suddenly lead a normal life together, Villanelle asks Eve what she wants for dinner (“spaghetti”) and if she’d like to run away to Alaska with her (“OK”). Villanelle says, “It’s going to be amazing” and assures a still very shocked Eve that she’ll feel better soon. “I’ll take care of you,” Villanelle says.

But then some birds cause a ruckus and Villanelle draws her gun out of instinct. When Eve realizes that Villanelle could have shot Raymond herself, she’s incensed. Villanelle simply says that Eve had it under control. Eve quickly realizes Villanelle wanted her to do it. Villanelle admits, “I wanted you to know how it feels. How did it feel?” Eve’s answer? “Wet.”

Villanelle tries to take Eve in her arms and says she’s proud of her, but Eve hardens and says she needs to go home. She yells at Villanelle for thinking something more is going on between them. Villanelle reaches to brush her cheek and Eve shouts at her: “You want me to be a mess. You want me to be scared. But I’m like you now. I’m not afraid of anything.” They toe the line between sexuality and violence for a moment more and then Villanelle tells Eve she loves her. “You’re mine,” she says. Still, Eve walks away. And then, when she realizes Eve is really leaving, Villanelle shoots her. Eve collapses and Villanelle simply walks away.

Could Eve be playing dead for safety like Hugo earlier or is she really dead? Is Niko still alive? How is this whole mess going to be sorted out?

No matter what happens, that’s a cliffhanger if we’ve ever seen one. The good news? Killing Eve is coming back for a third season. Fingers crossed Eve makes it there.