Let’s find out if anyone’s in the mood to kiss and make up in season two, episode seven, titled “Wide Awake.” 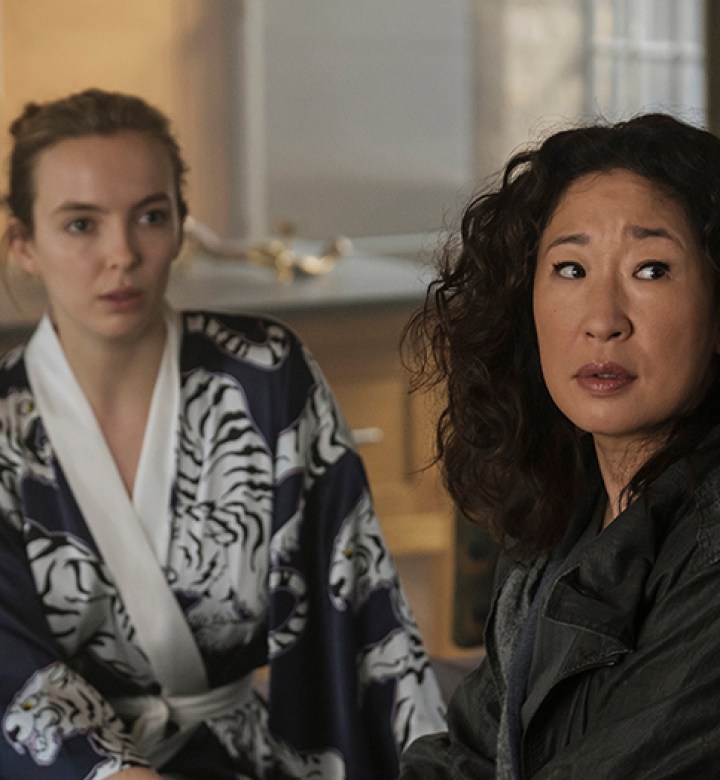 We open on Villanelle preparing breakfast for herself at home. When the doorbell rings she grabs a knife and goes out to find a gift from Aaron Peel (Henry Lloyd-Hughes). It’s the Dictionary of Philosophy with a note. He’s asking her to meet him for lunch—a peace offering.

Then, Eve barges in and tells her it’s time to get prepared for her next meeting with Aaron. Eve sits on Villanelle’s bed, ready to dive in, but then she stops. There’s something on her mind and Villanelle wants her to open up about it. So, she does. Eve asks if Villanelle meant all of that stuff she said in the A.A. meeting about not having feelings. Villanelle replies that all she knows is that she feels something when she’s with Eve.

Just then, one of the women from the gyro shop comes out of the bathroom and thanks Villanelle for their evening together. (Guess her desire was more carnal than murderous.) Eve is not amused, and she immediately resumes business. She informs Villanelle that Aaron is going to Rome next week, where the sale of his business will presumably take place. Villanelle can tell Eve is upset and tells her not to be jealous, assuring her, “I’m not with them when I’m with them.” Then the second woman from the gyro restaurant enters the living room on her way out. Yep, that just happened. 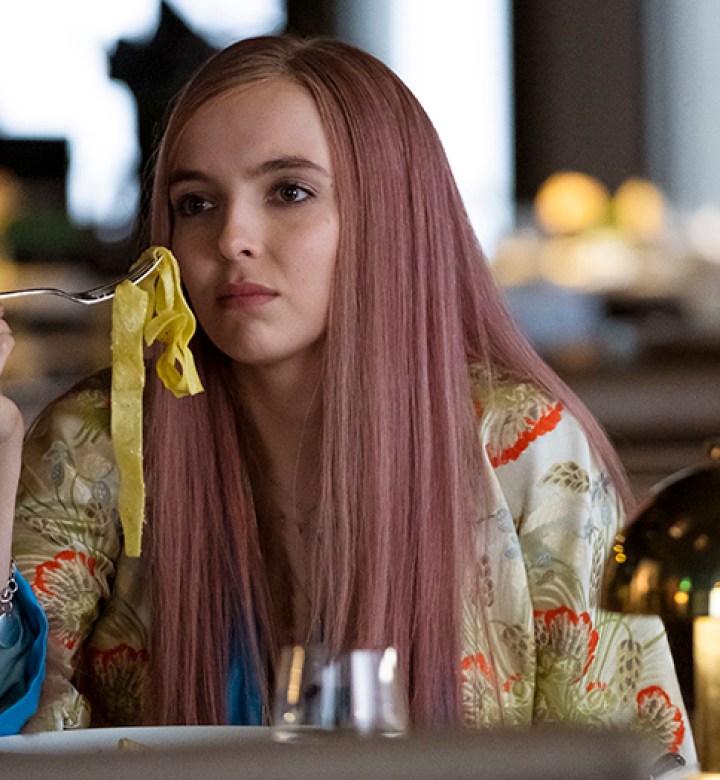 Eve takes that as her cue to leave, but not before insisting that Villanelle text Aaron and charm his face off so he will take her to Rome with him. Villanelle does just that and before long she and Aaron are dining together at a chic restaurant. Naturally, Aaron has rented out the entire place (he doesn’t like eavesdroppers) and taken the liberty of ordering for Villanelle (now in character as Billie). He isn’t eating and is content to watch her enjoy her food. She reluctantly takes a bite of the super exclusive dish he got her and confirms that whatever it is, it’s amazing.

Meanwhile, Eve is back at her flat worrying about Villanelle and leaving repeated messages (nine to be exact).

Aaron cuts to the chase and asks Villanelle/Billie why she befriended his sister. He wonders aloud if it’s because she’s a gold digger. She laughs and says her interest in money is more about owning things. There’s a weird sexual tension derived from their shared materialistic nature and love of control, and he asks her to come to Rome with him, just like that. She shoots back that she won’t sleep with him and he says he won’t even touch her.

When she gets back home she listens to Eve’s voicemails and smiles. 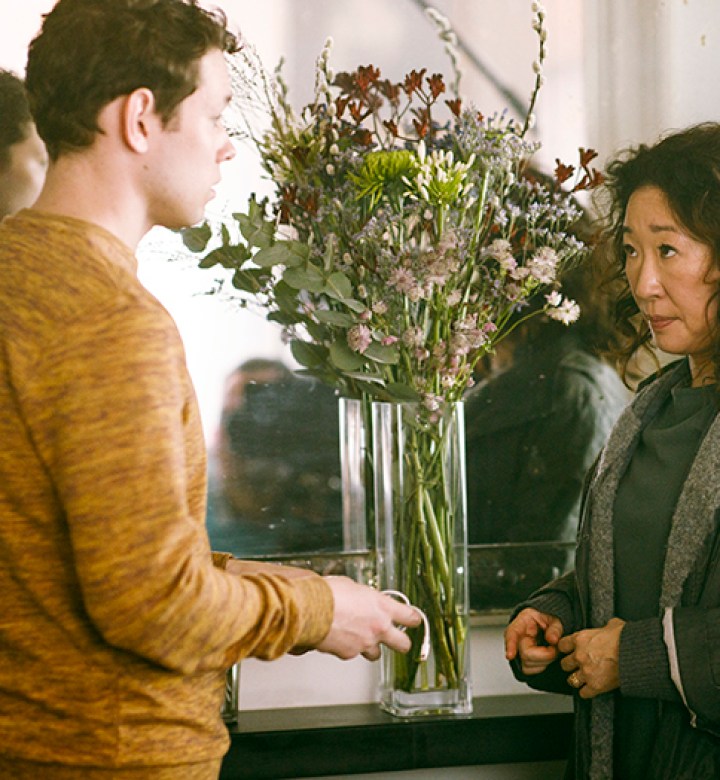 Later, Eve meets with Carolyn (Fiona Shaw) and Konstantin (Kim Bodnia) to give them an update on operation Villanelle x Aaron. They express surprise that Eve wasn’t listening in on their lunch conversation and tell her she will also be traveling to Rome. Carolyn suggests she take Hugo (Edward Bluemel) since she sacked Kenny (Sean Delaney). She adds that Kenny is very upset, and it has made their living situation uncomfortable. One last thing: The safe word for the operation is “Gentleman.”

After they talk brass tacks, Carolyn asks Eve about Villanelle’s behavior. She goes on to tell Eve that Rome is a really important operation and while she “hates to be strict” Villanelle must not kill Aaron or anyone else. Just then, Kenny arrives, and they awkwardly exchange pleasantries. Eve prepares to go but before she walks out the door Kenny approaches her and tells her not to go to Rome. The new project he’s on is somehow related to hers and he knows it will be dangerous. Before he can tell her why, Carolyn comes in asking him about his peanut butter preference.

Back in normal world, Niko (Owen McDonnell) moves some of his things into a storage unit while Gemma (Emma Pierson) helps. She offers to let him keep his things at her place, but he says she’s done enough for him. She replies that she could always “do more,” but her awkward sexual advance is foiled by Villanelle, who picked the opportune time to sneak up on them.

Gemma is naturally confused. Eventually she recognizes Villanelle from the school party and grows even more confused. Villanelle ignores Gemma and tells Niko she’s still waiting for a thank0you. Not only did she tell him the truth about Eve, but he also got a pretty great romp because of it. 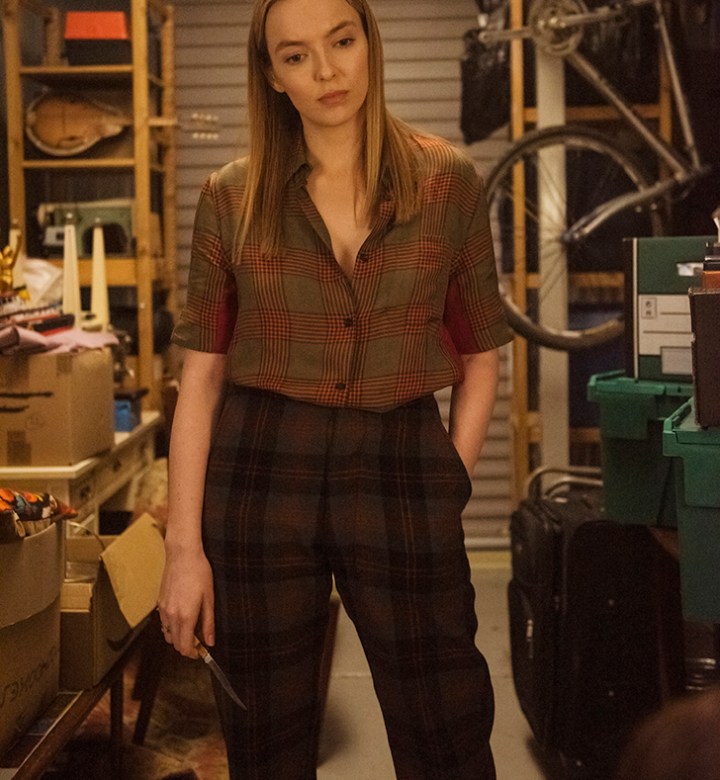 Villanelle pulls out a knife. But instead of attacking Niko, she asks for the recipe to his sheperd’s pie because she knows Eve likes it. After she secures the recipe, she interrogates Niko. She asks if he loves Gemma (“No”) and if he loves Eve (“Yes”). Villanelle sighs and says she was so close to letting them both go.

Villanelle is packing in her apartment later when Konstantin arrives and gives her money, a passport and a microphone masquerading as a pack of birth control pills. Clever, right? This will come in handy later. 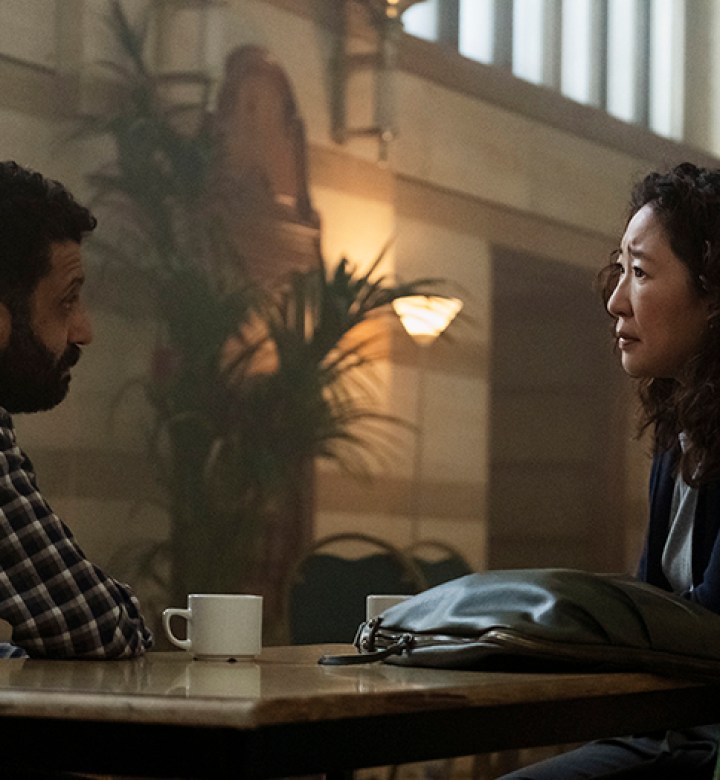 Worried by Kenny’s warning, Eve goes to see the psychiatrist who gave that psychopath presentation (remember him?). She asks him questions about Villanelle and he says that most times when people come to ask him questions they need to talk about their own mental health. He asks Eve to open up about her home life and her relationship with Villanelle before admitting that he recommended she be taken off the team. He expresses concern for her safety and tells her to be careful. 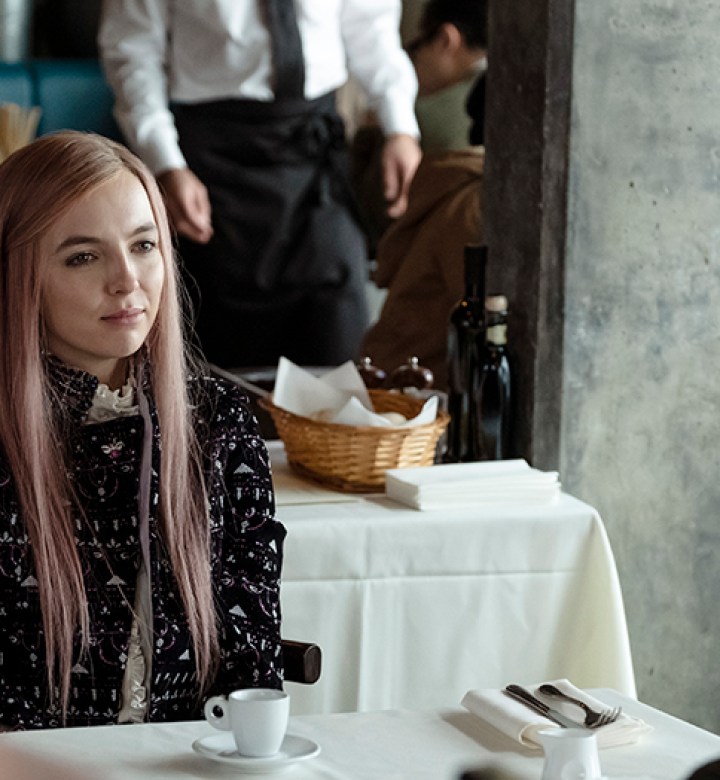 In Rome, Villanelle arrives at Aaron’s massive palazzo, and Eve and Hugo check into their tiny hotel room.

A woman shows Villanelle to her room and she finds that Aaron has bought her an entirely new wardrobe, lingerie included. She says she needs her bag, mainly her contraceptive pill (see, important), and is told that she won’t get her things back until they head back to London.

So, Villanelle tries on her new clothes and then she and Aaron go to lunch together. While there, Eve, who was freaking out because Villanelle hadn’t turned on her mic yet, hands Villanelle a new microphone hidden in a dinner roll when Aaron steps away. Aaron comes back and tells Villanelle he wants to watch her eat ice cream instead and that they’re leaving. 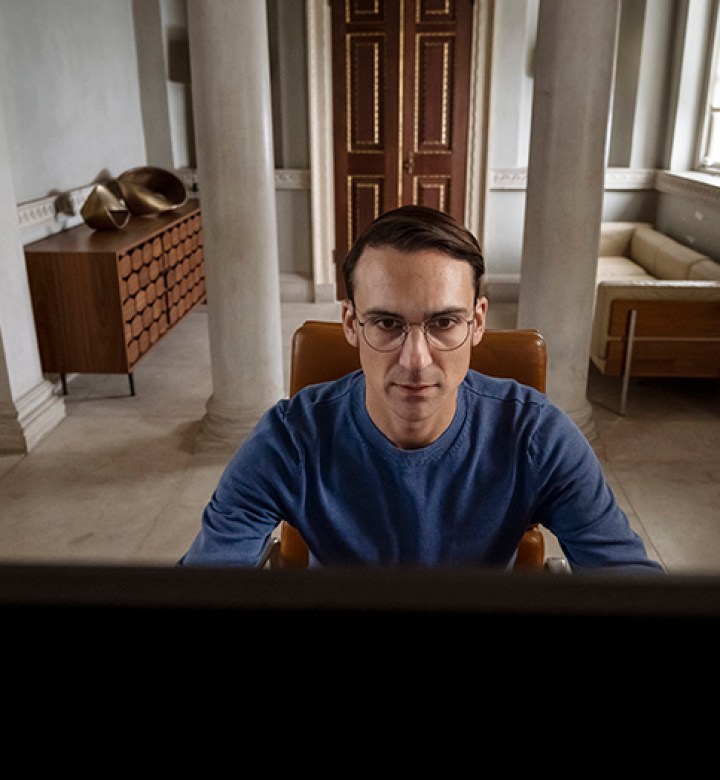 Back at the palazzo, Aaron surveils Villanelle in her room. Thankfully he doesn’t catch her taking the microphone out of the bread roll because of the way the cameras are situated. Afterward, he plays more control games with her and orders her to act bored stiff at dinner. Villanelle is an exceptional actress, as always. 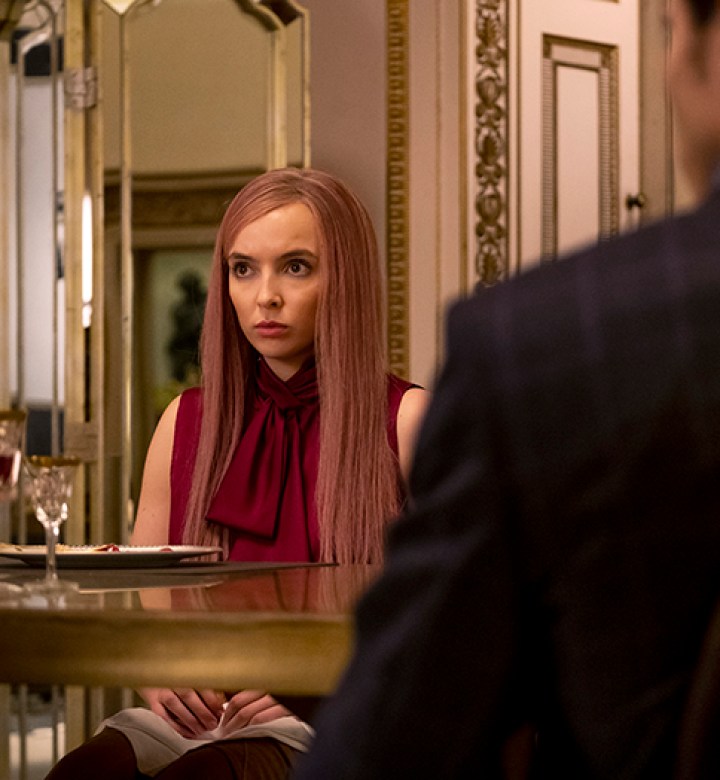 Over dinner, Aaron explains the technology he’s selling to their dinner guest. It’s exceptionally invasive and creepy. His software allows him to know more about people than they maybe even know about themselves.

He then tells Villanelle/Billie that she’s the only person on earth that he doesn’t know everything about. He calls her a void and she says that’s basically her in a nutshell. The difference between them is that Villanelle wants to connect with people, but Aaron doesn’t. 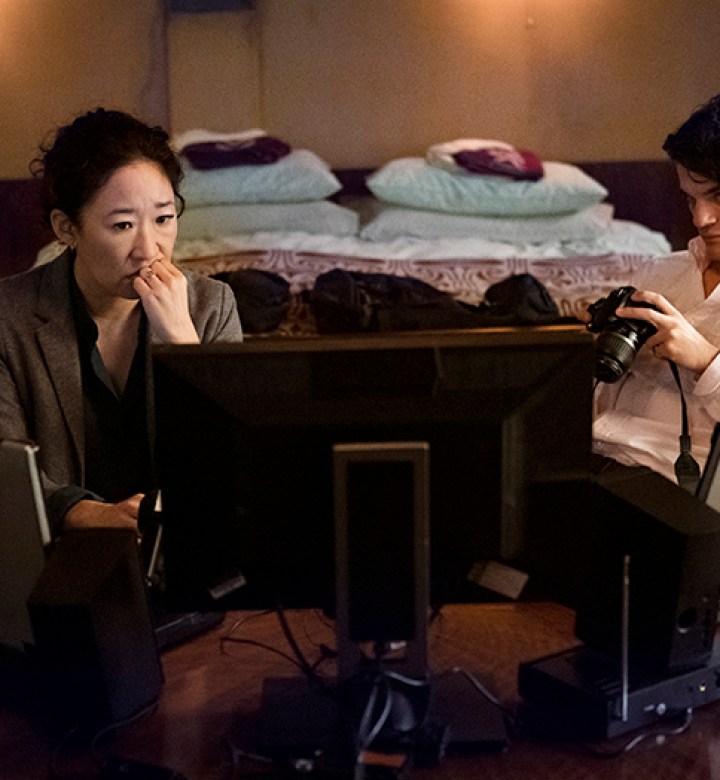 Over in less glamorous pastures, Eve and Hugo listen to Villanelle and Aaron’s conversation. When they seem to be going to bed, Hugo says he’s going to hit the hay, too.

Once Villanelle is cozy in bed, she begins to talk to Eve and asks her if she’s planning to listen all night. Then, she starts breathing heavily (you can use your imagination as to why) and Eve gets hot and bothered. So she wakes up Hugo and seduces him. “I thought you’d never ask,” he says.

As the episode ends, we go back inside the storage locker where Niko and Gemma were earlier. Villanelle has cut three air holes in the door, but Gemma won’t need them because she’s very much dead. Niko, thankfully, is injured but still hanging on.

Well, we didn’t see any of that coming. Will Niko live? How will things move forward with Aaron and Villanelle/Billie? And does this mean Eve is officially done with Niko and into Villanelle?

We can’t wait to see what transpires when the Killing Eve season two finale debuts Sunday, May 26, at 8/7c on BBC America and AMC.