We pick up right where we left off in season two, episode two, in this new episode titled “The Hungry Caterpillar.” 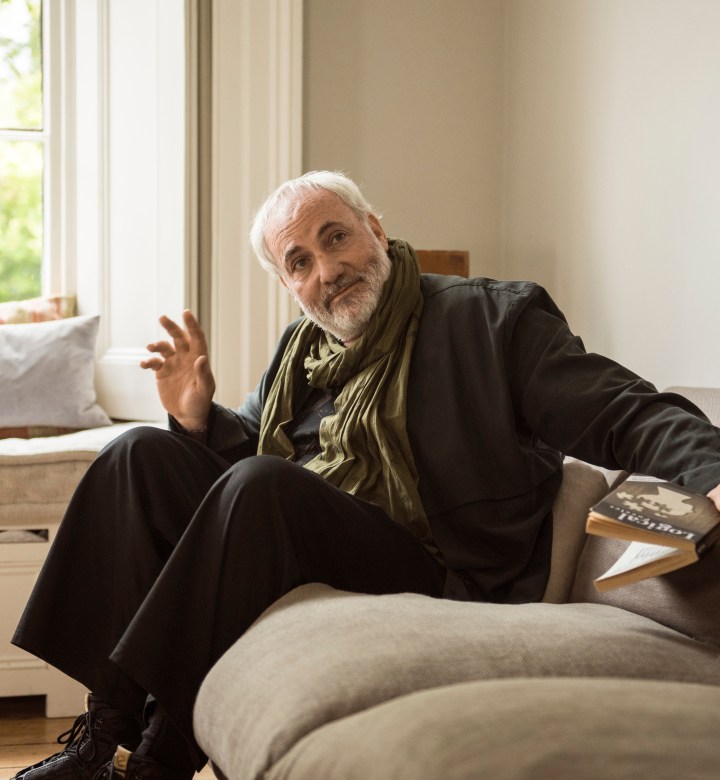 After processing that Konstantin is alive, Eve agrees to have a drink with him. She tells him she feels like she’s losing her mind a little then asks him if his family knows he’s alive. He tells her they’re in MI6 protective custody and that he doesn’t know where they are. After a beat, she asks the question we’ve been waiting for: Does he know where Villanelle is?

He warns Eve that she shouldn’t let Villanelle worm (or caterpillar?) her way into her mind any further because she “loves people to death.”

Speaking of deadly, Villanelle poses as an Economist-reading aspiring intern in order to get a word with businessman Greg Richardson on his way into the office. Their little convo turns into her strangling him to death using his Hermès tie in an elevator shaft. How’s that for inventive?

Back at Eve and Niko’s (Owen McDonnell) place, she surprises him with breakfast in bed. He’s so taken aback that he jokingly asks if she murdered anyone. It strikes a chord, but she recovers and says no. He suggests that they fool around instead of eating but she has to run off to work. At least they’re doing a little better…or are they? 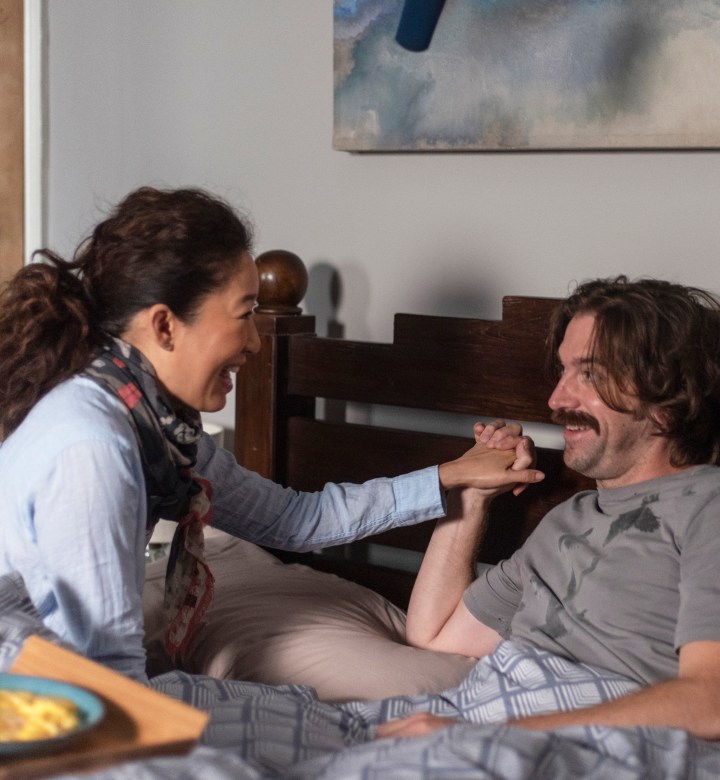 After Villanelle offs Greg Richardson, she heads to the hotel her new handler Raymond (Adrian Scarborough) has arranged for her. It’s hardly a five-star establishment and she shows her distaste by counting the stains on her bed.

Soon, Raymond arrives and tells her that there’s another female assassin who’s been killing it lately. Villanelle is cocky and quips that the new girl can do the boring jobs, but he tells her they actually don’t work for the same organization. In fact, he hints that Villanelle might be out of a job (aka murdered) if her employers find out who the skilled mystery woman is before MI6 does.

Of course, Villanelle’s ears perk up at the mention of MI6 and she’s enraged to learn that Eve is investigating someone else. So, she reacts in the way any insane person might and calls the school Niko teaches at, impersonates a child and files a complaint. Oh, she also goes on a shopping spree and charges it to the room/Raymond.

Later, dressed in her new couture, Villanelle spies on Niko at school and notices him flirting with a female teacher. Now she knows how to get Eve’s attention. 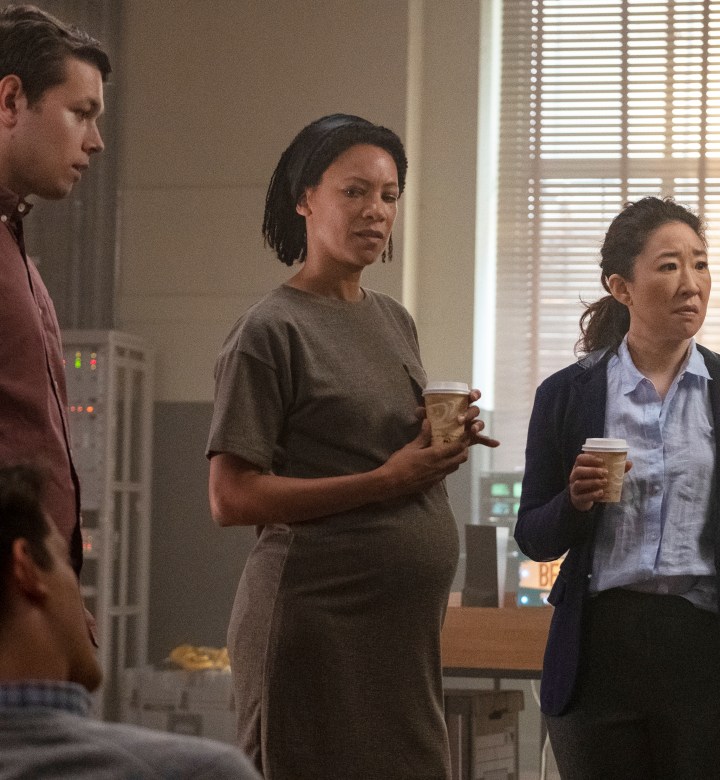 When Eve arrives home after work, Niko is on his way to the faculty cocktail party that she completely forgot about. He heads out the door to set up and she speeds upstairs to get ready. When Eve finally makes her way to the school, Villanelle follows her dressed in an exaggerated kindergarten teacher ensemble complete with glittery pasta necklace. Raymond intercepts Eve in the park to ask for directions and pulls a “bit of fluff” off her shoulder. Suspicious.

At the faculty party, the female teacher, Gemma, is once again by Niko’s side. Eve approaches them, and Gemma gives her an “avalanche of compliments” while simultaneously making her feel like a crappy wife for never making it to school events. When there’s a lull in the conversation, Gemma finally excuses herself and Eve asks Niko to show her his classroom. Things are just heating up when she notices an apple on his desk and panics.

Meanwhile, Gemma is smoking a cigarette in the stairwell when Villanelle approaches and asks to bum one. They get to talking and Gemma opens up about Niko. Villanelle, conveniently suggests that Gemma go for it even though he’s married. She wants Eve all to herself.

Villanelle is definitely on Eve’s mind, too, because the moment she sees the apple she rushes out of the room and pulls the fire alarm. Eve is convinced Villanelle is at the school (she is) and waits outside to see if she notices her familiar face rushing out. When she doesn’t see Villanelle exit the building with the others, she’s relieved and embarrassed. Niko, on the other hand, is furious and tells her to go home. He rushes to catch up with Gemma and as Eve watches him go, Villanelle secretly slips a tube of lipstick into her purse. 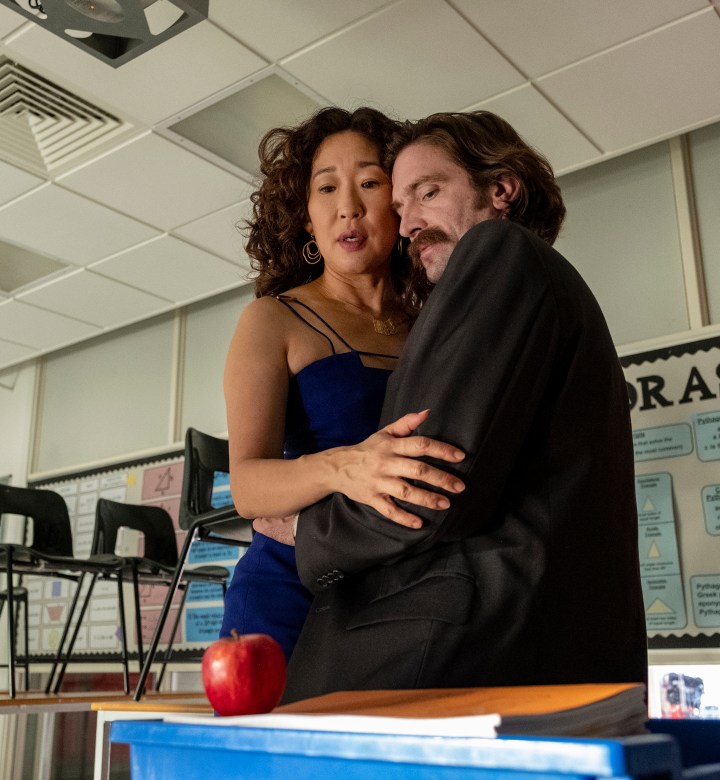 On the other side of London, Carolyn (Fiona Shaw) and Konstantin split a bottle of wine and chitchat. It seems delightful, until he asks to know where his family is and she refuses. He continues to ask, and she tells him to stop. When he counters that he would tell her if roles were reversed, she responds that she was careful not to get too attached to her son, Kenny (Sean Delaney), for that very reason. It’s surprisingly cold-hearted, even for her.

That night, Eve watches Niko sleep and wonders if there’s anything going on with him and Gemma. He starts to talk in his sleep and she’s relieved when it’s just about an alphabetic filing system.

The next morning at work, Eve finds the tube of lipstick Villanelle placed in her purse and knows exactly how it got there. It’s called “Love in an Elevator,” and she immediately recognizes that it has to do with Greg Richardson’s murder. She approaches Kenny outside the men’s restroom to ask him to track down the address of Konstantin’s family. She has a plan. But he’s not willing to upset his mom or put Konstantin’s family at risk. Eve yells at him to go find the address immediately and he does, reluctantly, but you can tell their relationship won’t be the same.

As promised, Kenny finds the address and Eve heads straight to Konstantin to make a deal. If he tells her where The Twelve (the company Villanelle works for) keep their assets while they’re in London, then she’ll give him the address. 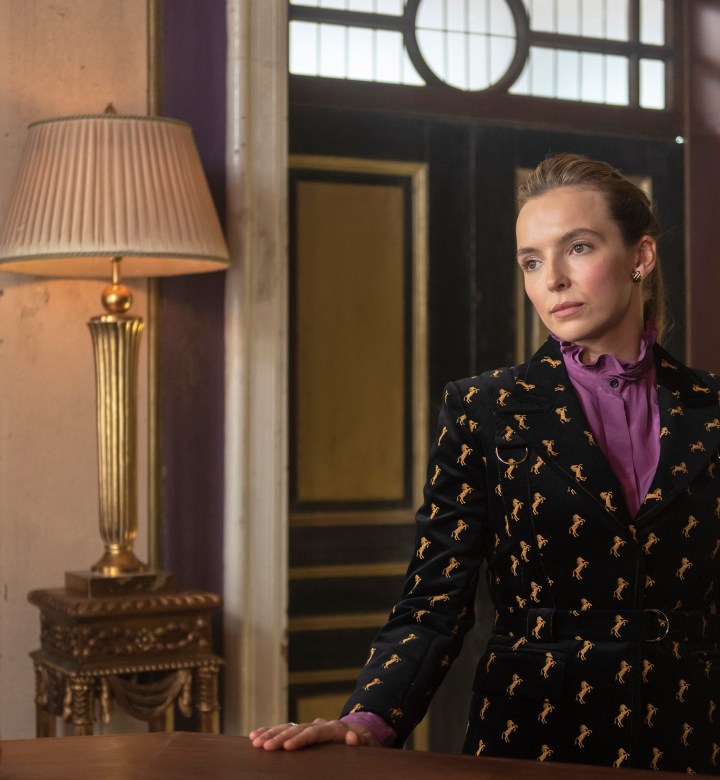 Back at Villanelle’s hotel, the concierge tells her they have a new guest. She’s suspicious and possibly fearful she’s about to be assassinated. So, she takes a switchblade out of her jacket in the elevator and prepares for the worst. But when she gets off, she hears classical music, sees Konstantin and runs for him.

At first, it’s unclear if she means to kill him or hug him, but it ends up being the latter. She apologizes for trying to kill him and he tells her that she has five minutes to get out before MI6 arrives. She doesn’t believe him until she hears them knocking down her hotel room door. Then she sees Eve and she laughs out of relief. Eve recognizes the laugh and walks down the hallway toward the very room she’s in. There’s tension as Eve puts her hand on the door. She hesitates for a moment then tells the officers to come break down the door.

By the time they do, Villanelle and Konstantin are gone. Eve is furious and downs a mini bottle of vodka from the hotel fridge. She realizes that Konstantin screwed her. 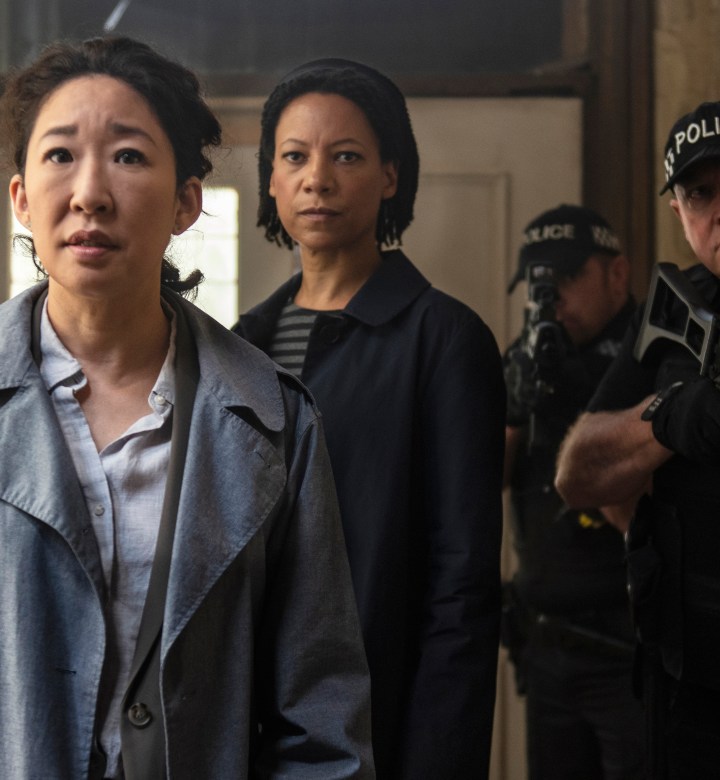 Later, Eve must answer to Carolyn. She went behind her back to compromise Konstantin and, needless to say, Carolyn isn’t happy about it. So, she gives Eve an extremely stern talking to and tells her to stop taking up so much of her time. As Eve goes to leave, she tries to apologize to Kenny, but he simply says, “I thought you were different from Mum and the others.” She struggles to come up with a reason to justify her actions and he walks away.

As the episode comes to a close, Villanelle and Konstantin drive away. She asks if Eve ever talks about her. He toys with her and says that she’s more interested in finding the new female assassin, who’s been nicknamed Ghost. Villanelle is hurt and disappointed; a dangerous combination for a spree killer.

So it’s hardly surprising when Eve decides to try out the lipstick Villanelle gave her and cuts her lip on a razor blade hidden inside it.

How will Villanelle act out when season two returns with episode four this Sunday, April 21, at 8/7 c on AMC and BBC America? Only one way to find out.