Last week on Killing Eve, Eve (Sandra Oh) hired Villanelle (Jodie Comer), yes, a brutal killer, to help her tap into the mind of someone just like her: the Ghost. And if that wasn’t terrifying enough, Villanelle also visited Niko (Owen McDonnell) and got in his head.

Let’s see how this all plays out in episode six, titled “I Hope You Like Missionary!” 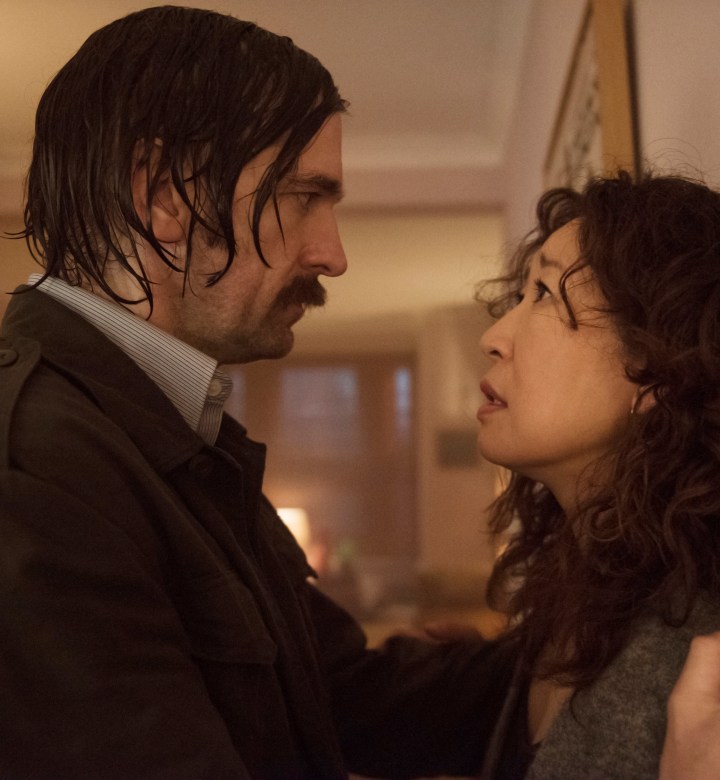 We open on Eve sitting home alone. It’s pouring outside, and Niko suddenly appears in the doorway, drenched. He tells her Villanelle came to visit him and although he knows she’s a liar, he believes everything she told him about Eve. He’s frustrated and pushes Eve, asking, “What do you want from me, Eve? Do you want me to love you or do you want me to frighten you?” She answers that she doesn’t know. There’s sexual tension and he orders her up to the bedroom, presumably to get it on. Villanelle watches from the window. 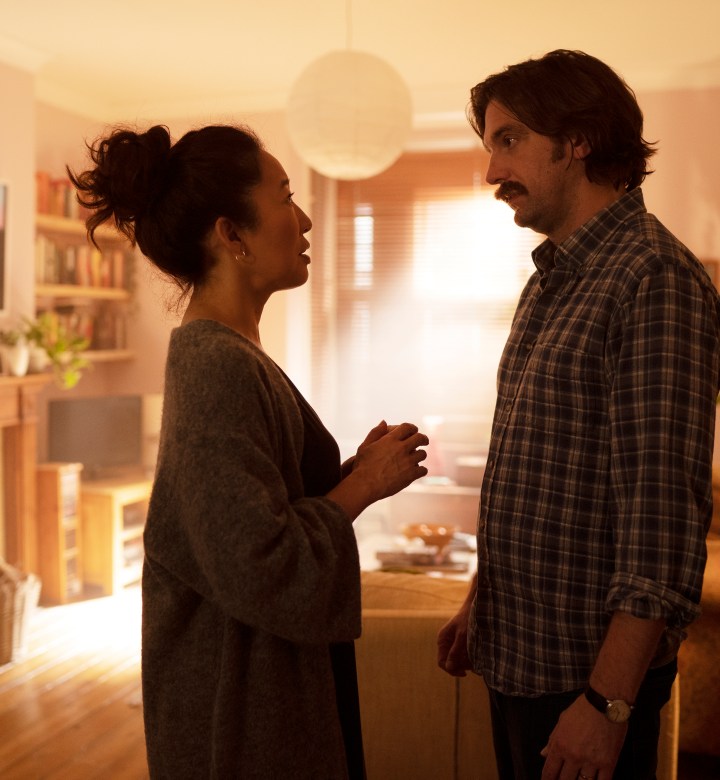 The next morning, Eve makes coffee in the kitchen with the knowing smile of someone who had a rather thrilling night. When Niko enters, she pretends they’ve had a hot one-night-stand, but he’s not as pleased as she is. He tells her he can’t do this anymore and leaves her, just like that.

Meanwhile, Carolyn (Fiona Shaw) is having her cake and eating it too. While Konstantin (Kim Bodnia) whips up breakfast, another one of her lovers from the Nairobi bureau descends the stairs and they have a little meet and greet in the kitchen. Poor Kenny (Sean Delaney) walks in and sees his own personal nightmare (his mom hanging out with two of her lovers). Still, good for Carolyn.

At the same time, Villanelle breaks into Eve’s apartment to use her toothbrush and move things around—you know, just for fun. 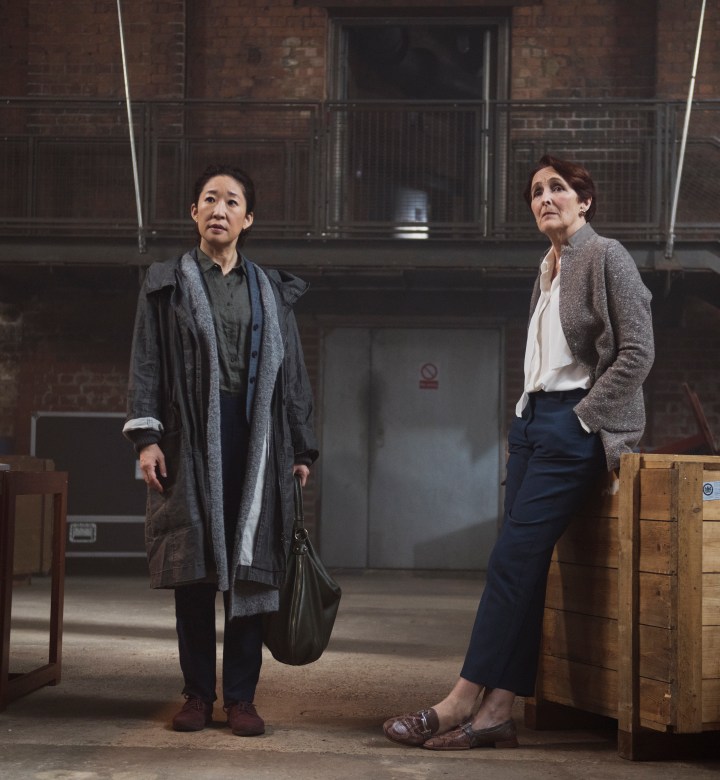 Carolyn and Eve meet at a hookah bar (in the morning, casual) and watch surveillance of Aaron Peel (Henry Lloyd-Hughes) captured by a journalist. Aaron caught the journalist filming him and killed him. Simple as that. Carolyn tells Eve there’s an upcoming conference Aaron will be at. Since Aaron doesn’t do girlfriends, boyfriends or sex robots, they have to think of some way to capture his attention. So, Eve proposes that they send Villanelle and Konstantin. (Called it.) The even crazier part? The murderous duo agrees.

So, Eve visits Villanelle’s posh new Soho House–esque apartment to brief her. Villanelle naturally greets her with, “Hiii, partner.” Villanelle asks how things are with Niko (bad), but Eve is right to business. She tells Villanelle to target his sister, Amber (Shannon Tarbet), at her AA meetings. Villanelle devises an affluent New Yorker character named Billie who should be able to woo Amber nicely.

Back at M16, Eve asks Hugo (Edward Bluemel) to develop a social media presence and rap sheet for Billie, as Aaron will definitely do his research. Then, Carolyn briefs Villanelle and gets her set with all the tech she could possibly need. The whole time, Villanelle jokingly chastises Eve’s professionalism. 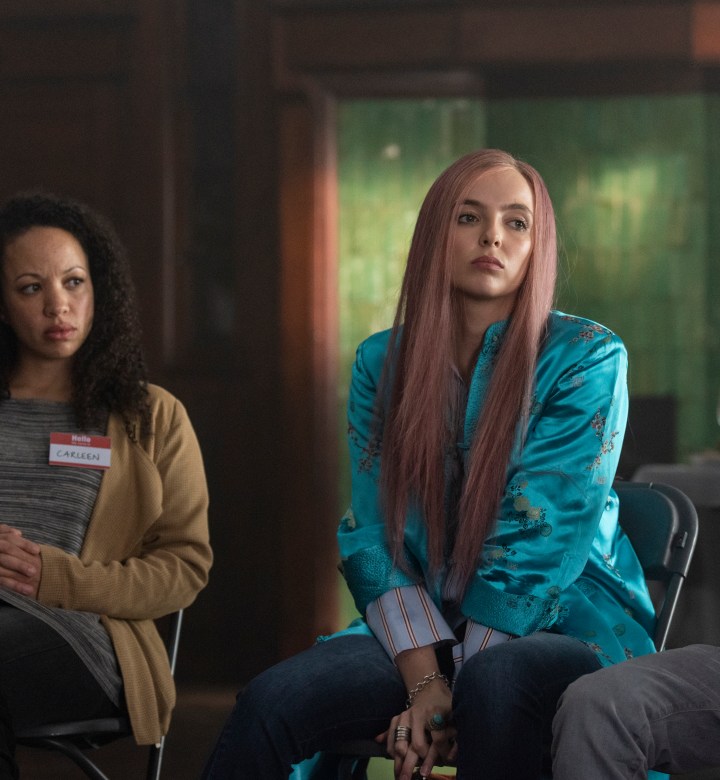 Afterward, Eve goes to get some lunch and checks her phone for any word from Niko (spoiler alert: He’s gone silent). Villanelle sneaks up on her and says Niko is too normal for her anyway. Eve retorts that Villanelle couldn’t possibly imagine what it’s like to be a regular, non-sociopathic person, and Villanelle shoots back that they’re more similar than Eve thinks.

Villanelle makes an even bigger show of her and Eve’s similarities when she poses as Billie in an AA meeting later. She uses direct quotes from their earlier conversation and borrows Eve’s life story to illustrate a point. She says she hurt someone in Paris and that her husband just left her. Instead of supporting her, the group tells her to stop wallowing in self-pity and she doesn’t take kindly to it.

Once the meeting is over, Amber approaches “Billie” and tells her she’ll need to be more honest in the future because these people can smell bull-sh**. Villanelle doesn’t like being told what to do.

Back at the café where Eve has been listening to everything, she tells Villanelle to step it up. Villanelle’s answer? “Don’t speak to me like that, Eve. I like you, but I don’t like you that much. Don’t forget: The only thing that makes you interesting is me.” Eve is not playing her game and leaves.

At home, Eve’s bed is empty and Niko still isn’t back. So, the next day, she goes to the school he teaches at and sees him flirting with Gemma (Emma Pierson). Remember her? She’s putting on her best supportive but totally interested friend routine. 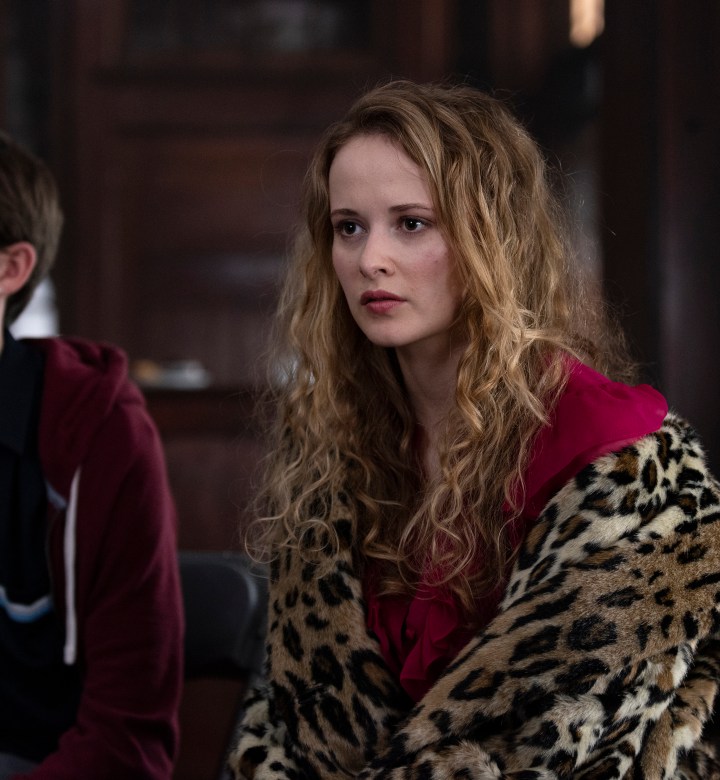 Later, “Billie” shares at another AA meeting and this time she’s honest. She admits she has an issue telling the truth and feels no emotions. She tries to find ways to make herself feel something, but it doesn’t work and she’s so bored. If she was telling Eve’s story before, now she’s opening up about her own experience as a psychopath. Amber congratulates her later and tries to befriend her before her handler interrupts and says she’s not allowed to form any relationships in here. Amber leaves and Villanelle comes up with an idea.

She approaches the handler and apologizes, saying she’s going through a hard time. Then, as Eve watches, she pushes her in front of a bus and consoles Amber afterward. When Eve tries to tell Carolyn what happened later, she brushes it off and makes it clear that all that matters is that Villanelle makes contact with Amber. They’re now on texting terms so at least that’s working out. 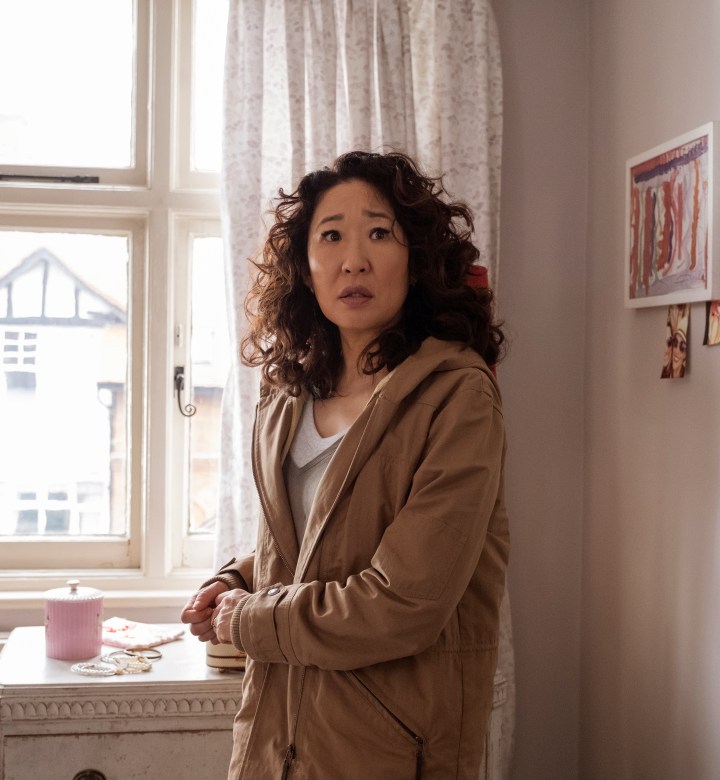 What isn’t working out is the whole Eve and Niko thing. She stops by Gemma’s house to drop off Niko’s stuff because apparently that’s where he’s living now. (So, what’s her place like? Let’s just say she has fairy lights everywhere and Anne Geddes photos on the wall.) It’s tense and Eve tells him it looks like they’ve both been busy with work. She asks to use the restroom and instead messes up Gemma’s lingerie drawer and breaks her music box. Gemma catches her and asks her to leave. So, Eve shouts that she hopes she likes the missionary position, and Gemma shoots back that she does. 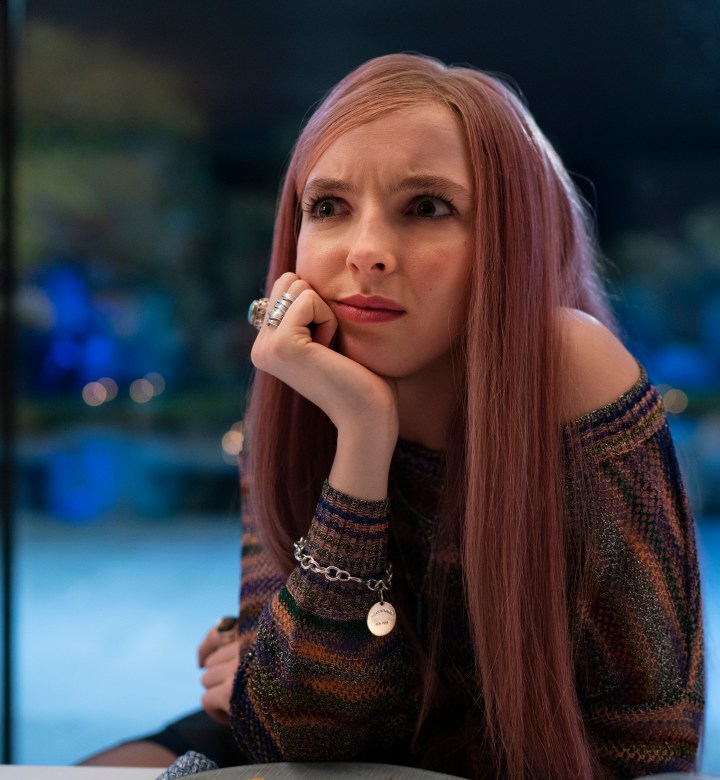 Meanwhile, Villanelle is dining at Amber and Aaron’s home (as Billie). He’s grilling her and then starts talking trash to Amber in Greek. Billie asks to use the bathroom and Eve tells her to look around the house for any incriminating documents. She finds the office but Aaron catches her before she can look around. He asks her if she’s lost and she says no, just being nosy. He directs her to the loo and tells her being nosy isn’t polite. Eve and Konstantin are freaking out in her earpiece, so she swallows it. 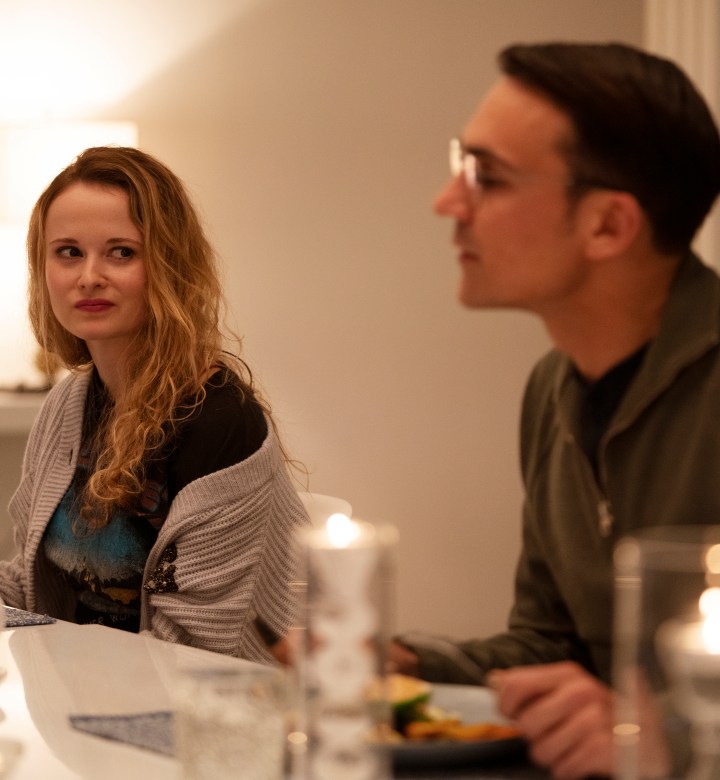 Later, Aaron, Amber and Villanelle/Billie play a game and Aaron continues to chastise her. He questions her about philosophical proofs (she’s supposed to have a degree in philosophy) and when she doesn’t answer he drops a philosophy book in her lap. She hits him with it hard in the face and storms out. She’s gone rogue and she’s so angry she’s sure to kill someone.

When she stops into a gyro restaurant and learns gyro is just a bunch of mixed meat, she gets an idea. We don’t know what it is yet, but it appears to have something to do with the two girls that walk into the restaurant just then. This can’t be good.

Killing Eve returns with the season’s penultimate episode Sunday, May 19, at 8/7 c on BBC America and AMC.