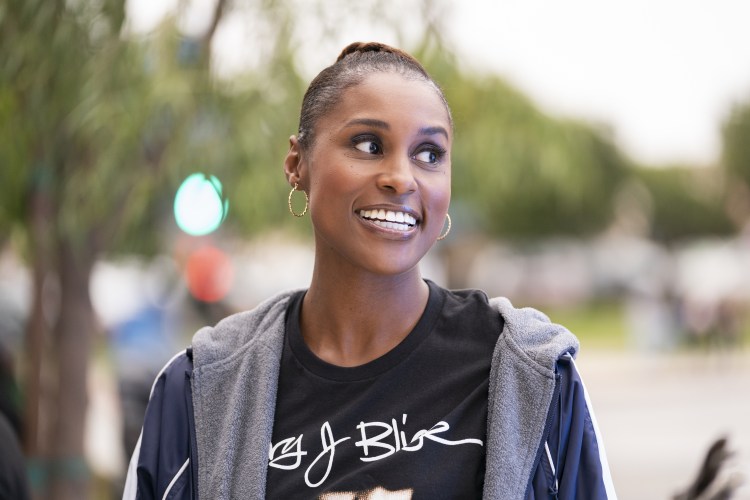 The season three finale of Insecure opens on a montage of Issa (Issa Rae) visiting local businesses and trying to drum up sponsors for her block party project. Unfortunately, she gets rejection after rejection and in a desperate attempt, turns to her batty tenants to increase the body count.

Later, Issa gets together with Molly (Yvonne Orji) and tells her she’s going to put her block party dreams on the shelf and start applying to jobs. She admits that Nathan (Kendrick Sampson) made her feel like she could pull this event together in no time, but without his support she’s starting to see things realistically pessimistically. She explains that she wants “a boring job” like Molly, but Molly quips back that lately her job has been anything but that. After Molly cut her co-worker Taurean (Leonard Robinson) out of a meeting last episode, he’s been icing her out and making things difficult.

Instead, they discuss more positive things, like Issa’s upcoming 30th birthday celebrations. Molly plans to surprise her with a group outing, which much to Issa’s dismay, is not an all-expenses-paid vacation to Mexico. Nonetheless, Issa says she’ll settle for a drama-free birthday. (Famous last words.) 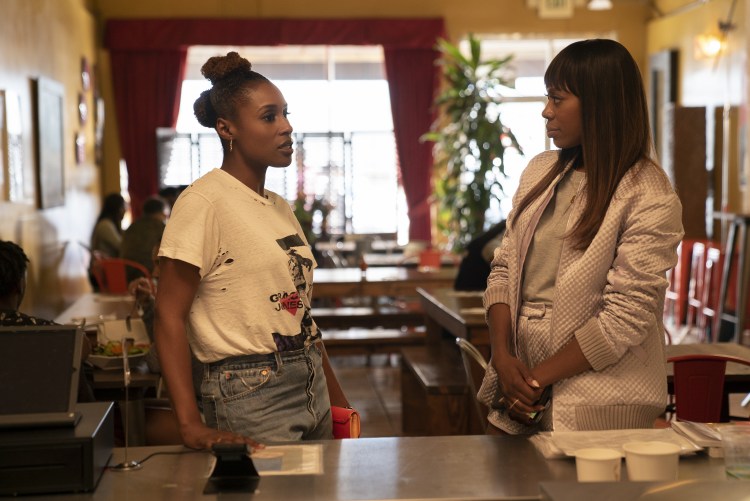 Later, Molly arrives at her office and her assistant tells her Taurean and the partners are waiting for her in a conference room. It turns out that they’re not reprimanding her for being shady, they’re rewarding her with more responsibility. She and Taurean are going to serve as lead counsel on a huge new client. She’s ecstatic that her risky move worked out, but Taurean is not. Before the meeting ends, he tersely tells the partners he’s excited to have “a teammate as aggressive as Molly.” *Sniff, sniff* Is that trouble we smell? (Yep.)

Lawrence meets up with his dad to help him set up his new phone. His dad asks if he’s dating at all and if he’s seen Issa. Lawrence says he and Issa have been hanging out but that it’s not like that. He’s been dating but is discouraged because everyone seems to have baggage. His dad opens up about the mutual baggage he and Lawrence’s mom brought to their relationship but explains that they unpacked it together. This message hits Lawrence hard and leaves us wishing, hoping and dreaming he’s thinking about Issa.

Meanwhile, Issa is sticking to her word and taking interviews at other non-profits. She visits with the dude from The Beat Crew (remember that music foundation that caught her eye at the job fair in episode three?) The interview goes well, and he promises to pass her resume along. TBH, she really needed that win leading up to her birthday.

Speaking of…Molly shows up at Issa’s house later to pick her up for her birthday celebration. Just as she’s about to text Issa, saying her chariot awaits, Molly sees Nathan walking up to Issa’s building with flowers. Molly isn’t having it and in hopes of keeping Issa’s birthday drama-free, gets out of her car and tells him to get lost so he doesn’t ruin the day. 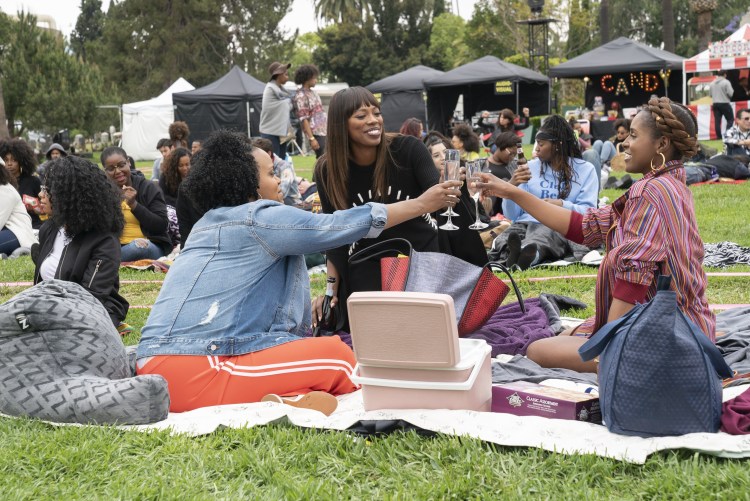 A blindfolded Issa arrives with Molly at the Hollywood Forever Ceremony for a screening of The Last Dragon. (Yep, movies in cemeteries are a thing in L.A.) When Issa removes her blindfold, she gets pumped up. She tells Molly, “You did it right. I’m starting 30 all the way right. I’m hanging with my girls, I’m getting my bag checked.”

She grows even more excited when they run into Lawrence (Jay Ellis). She and Lawrence start quoting the movie to each other and joke around. He tells her happy birthday and she looks at him longingly as he walks away, something that’s not lost on Molly.

Inside, they find that Kelli (Natasha Rothwell) reserved a large area to avoid Coachella fight 2.0. They pop the Champagne, and Kelli gives a toast: “We’re out here thriving, looking like all three Jennifer Hudsons.” They reflect on the last year and its trysts. It dawns on them that they’re all single and kind of over looking for love. Kelli calls this the “graveyard of sex ghosts past,” so it seems only fitting that she spots no fewer than three exes in their proximity. She curses one out from across the cemetery, realizes it isn’t him, then goes over to flirt with him because he’s fine.

Meanwhile, Lawrence finds Chad (Neil Brown Jr.) and some other friends on a nearby picnic blanket. Chad is holding a Balmain purse and tells Lawrence that it’s his girl’s. Yep, his fiancee took him back. Lawrence has a far-away look in his eyes and, again, we hope he’s thinking about Issa.

He must have been because the next thing he does is head over to Issa’s picnic blanket and give her a birthday gift of Raisinets. They flirt, and he asks how planning her event is going. She admits she’s putting it on hold for now and she’s just “trying to make the right decisions.” He says he is too, but instead of kissing her right there, excuses himself and gets back to his crew.

While Molly is in line at the concession stand, she also runs into an ex: Jared (Langston Kerman). They catch up and just as she probably starts wondering why she ended their relationship, a man walks up and she remembers, oh yeah, she thought he was homosexual. She awkwardly rushes to say goodbye (without getting any food, as Jared points out). She runs back to the girls and tells them that her suspicions about him were right. She boasts she should have trusted her gut…which makes it awkward (and super funny) when he introduces the man as his brother and a woman as his girlfriend after the movie. Guess you can’t always trust your gut. 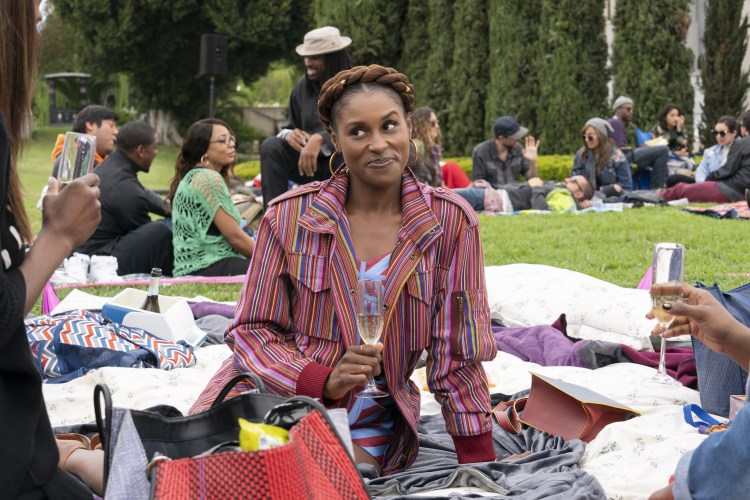 After the screening, Issa approaches the host of the event, whom she met at Tiffany’s (Amanda Seales) baby shower. They chat and Issa opens up about how hard it’s been getting her own event off the ground. They relate over all the no’s they’ve received, and the woman encourages her to continue working on it.

Later, Issa tells Molly she’s going to give her block party idea another chance. Molly laughs at her and says she needs to stick to her word, then lets it slip that Nathan came by Issa’s earlier. Issa is furious, and Molly explains that she didn’t tell her because she didn’t want there to be any drama on her birthday. She calls out Molly for “seeing the worst in everyone” and says she’s projecting her negativity onto Issa’s relationship. Issa asks what Molly’s end goal is and if she plans to be successful but have no friends or loved ones. It hits Molly hard.

She arrives at the office the next day with a resolve to be a team player. She runs into Taurean in the hallway and spit-balls ideas about how to handle their new client while he just stares at her. When she stops to take a breath, Taurean says she can handle the client herself because he’s decided to work with another team on another case. It’s a win career wise, but as she sees all the other associates gathered around a desk together, she realizes her actions have consequences.

Meanwhile, Issa meets with the event organizer and they brainstorm for Issa’s block party. The woman has tons of connections that can help her bring this project to life and Issa is grateful. They leave the cafe, and the woman tells her she’s heading to a date. And guess what? That date is with Lawrence. Turns out the baggage he referenced was this woman’s divorce. Does this mean we have to give up hope on the Issa and Lawrence ship? (NEVER!)

Issa arrives home and sees flowers from Nathan on her doorstep. 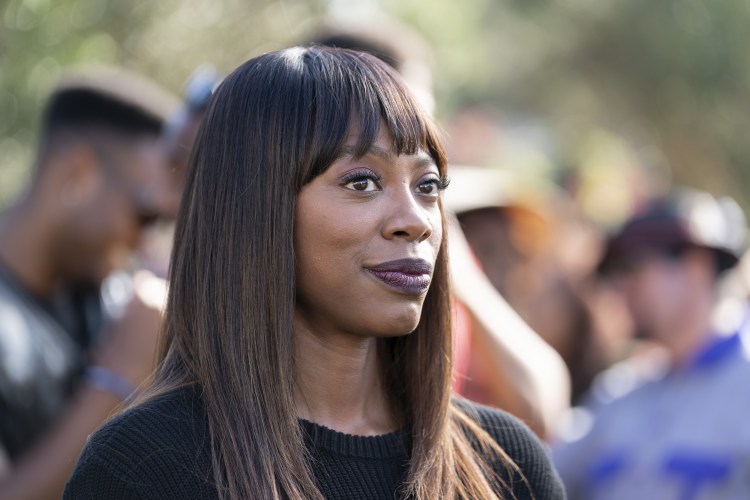 Still upset from the fiasco at work and her fight with Issa, Molly decides to call Andrew (Alexander Hodge) and apologize. He’s not happy to hear from her and makes no effort to hide it. Molly persists, telling him, “I’ve come to the conclusion that I do not always assume the best of people. And I’ve kind of been in a selfish place.” She continues on with her apology, expecting him to accept it emphatically. Instead he remains quiet on the other end of the phone. Looks like it’s not going to be that easy, Molly.

At the same time, Nathan and Issa get together to talk. He apologizes for going silent and says he was in Houston. His explanation? Sometimes he gets in a bad headspace and doesn’t like to talk about it. She’s incredulous and says, “So you ghosted me and left L.A. because you were in a bad mood?” Yep, basically.

Thankfully, she doesn’t let his bad behavior slide and says she needs to figure some things out before they can explore the idea of being together. (Yaass, Issa!) She tells him she should get inside because her neighbors made a noise complaint about her to her and he says he hopes they can talk because he’s “back here for good.” Mmhmmm.

And that’s the end of season three. We hoped we’d see Issa and Lawrence get back together, but alas, there’s always season four. Now we wait until the hit HBO show returns sometime next year.

RELATED: ‘Insecure’ Season 3 Recaps: The Good, the Bad and the Hella Awkward