‘Game of Thrones’ Season 8, Episode 6 Recap: The End Is Here

In last week’s episode of Game of Thrones, we saw the horrific Battle of King's Landing and followed Arya Stark (Maisie Williams) through the destruction and chaos 'til nearly everyone (including Cersei, Jaime, the Hound, the Mountain and Euron) were killed or turned to ash or rubble.

This week, will there be any Iron Throne left to claim? The last episode of the most epic series in TV history has a lot of explaining to do. 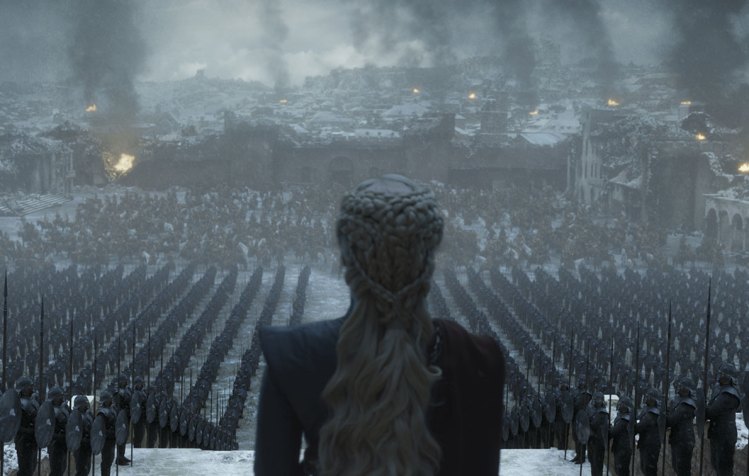 The episode opens as Tyrion, Jon and Davos survey the damage of King's Landing. Ash rains down on what remains of the people-less city. Drogon's flames still burn throughout, but the streets are void of life. The last of the Lannister soldiers, the Queen's Guard, are executed by Grey Worm one by one, but not before Jon is completely disgusted by Daenerys's orders to spare no one that followed Cersei (although, is he really surprised?).

Tyrion enters the map room of the Red Keep and inspects the damage, hoping for some sign of his brother and sister. He ventures down to the cellars and see Jaime's gold hand beneath the rubble; he finds them both there, dead in each other's arms. (Well, at least they got that, we guess...) 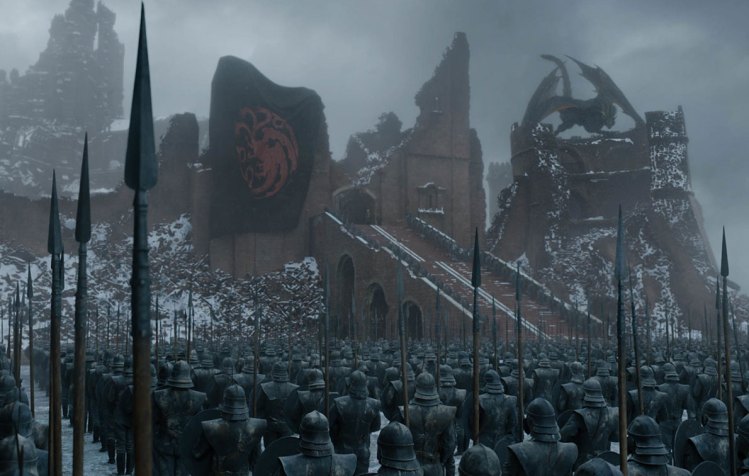 Arya, not on her savior white horse, watches as the Dothraki Bloodriders and the Unsullied gather in front of the steps leading up to what remains of the Sept, the same steps where Cersei did her famous walk of shame. Jon Snow watches as Drogon flies overhead, and we get a glimpse of Dany's remaining forces, which are MUCH larger than we ever thought possible.

Daenerys, dressed in all-black leather with garnet cape-sash and looking evil as hell, steps out to look over her remaining army, and the Bloodriders cheer her on. She gives a rallying speech to thank them for their service, and for "giving" her the Seven Kingdoms (let's be real, you took them by force), as a black-and-red Targaryen flag hangs on the side of the stone remains of the city. Tyrion arrives and she accuses him of freeing Jaime, to which he accuses her of killing a whole city (fair), and he's taken prisoner.

Jon speaks with Tyrion, who confesses all his sins and asks about the afterlife ("There's not" is Jon's reply, and...cool?). Tyrion has a good point though: Dany doesn't seem done with war. This isn't the end of her terror, not by a long shot. "Our queen's nature is fire and blood," Tyrion says. Jon tries to defend her: "She saw her friend beheaded, she saw her dragon shot down from the sky!" But Tyrion's right: Jon would never do the same thing.

"I know you love her, I love her too," Tyrion confesses to Jon. "Love is more powerful than reason we all know that, look at my brother," he continues.

"Love is the death of duty," Jon Snow answers, explaining that Maester Aemon told him that a long time ago. Tyrion asks Jon to save him, but he says it's Dany's decision. Tyrion retorts that Sansa would've never told him about Jon's true parentage if she had thought Dany should sit on the Iron Throne. If Sansa won't accept the dragon queen, then Jon has a seriously tough decision to make. 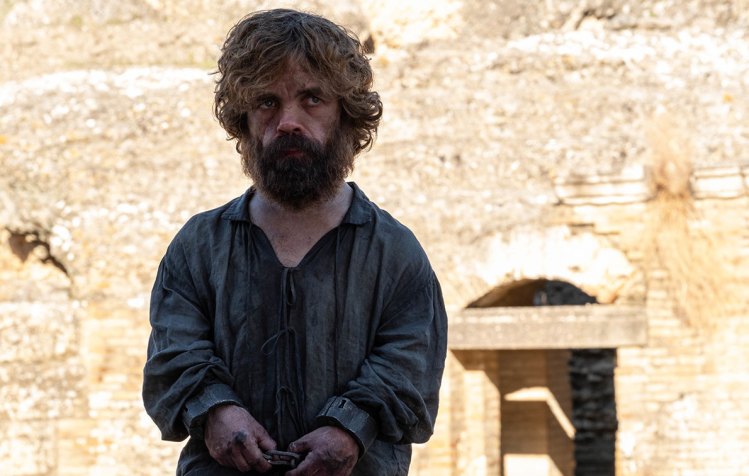 Dany's throne room vision comes to life as the dragon queen surveys the Iron Throne that she fought so hard, and killed so many, to gain. Ash falls around her as she surveys her prize, the one thing she's wanted her whole life and with her whole being.

Jon appears and tries to talk some sense into Dany, to spare Tyrion's life. Daenerys gets all hot and bothered and proposes that they break the wheel together. But just as they're making out, Jon stabs her in the chest and kills her. (We knew this was coming the whole time, and yet...WTF!!! That was way too easy.). Drogon arrives on the scene and seems very angry about his queen's death, and in his fiery fury, melts the Iron Throne to mush. We thought Jon was next for sure, but he then scoops Dany and takes her away, presumably to give her some sort of proper burial. 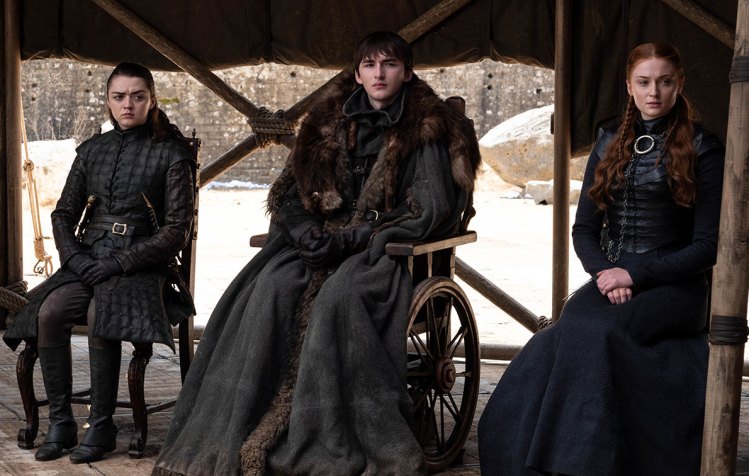 Prisoner Tyrion's brought to the Dragon pit by Greyworm, where a democratic council is being held to elect the next king or queen. Sansa, Bran, Arya, Edmure Tully, Samwell Tarly, Gendry, little Lord Robin Arryn (he now has a mustache?!), Brienne, Yara, the new Dorne prince and Davos are all there. Tyrion's a prisoner, but so is Jon, and Greyworm informs the group he's going to stay in jail for killing Daenerys as long as the Unsullied have a say in it.

The group has to decide on a king or queen, but not before Edmure Tully tries to sway the group before Sansa coldly shuts him down ("Sit down, uncle."). Sam tries to go a more democratic route, but is quickly dismissed as well. From now on, rulers will not be born, but will be chosen in the Dragon pit, "on this spot," Tyrion declares. Amen. 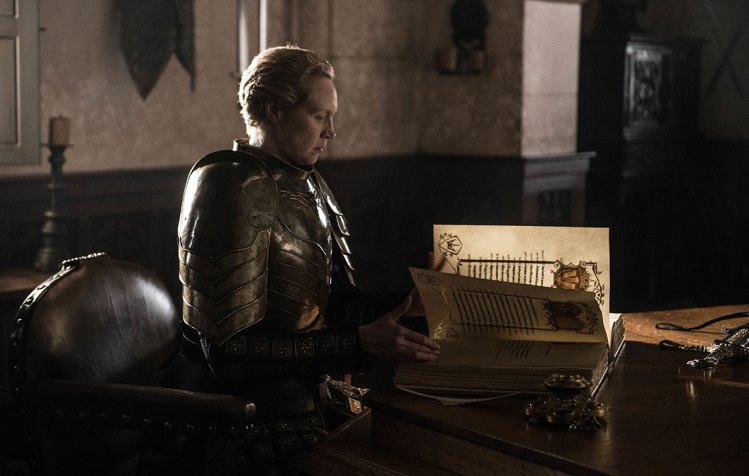 The council, by way of Tyrion, elects Bran the Broken as king of "six kingdoms," as Sansa tells him the North will never kneel again. Yep, that's right. The North will be its own kingdom, ruled by Sansa.

The council votes to send Jon (who's now sporting a Jesus beard with who-knows-how-many days in prison under his belt) north to the Night's Watch as punishment, as there will always need to be a place for "bastards and broken men," Tyrion declares. "Was it right, what I did?" Jon asks. "Ask me again in ten years," Tyrion says.

Morose-looking Greyworm is setting sail for Missandei's home of Naath (that's him making the best of his God-awful scenario, we guess), and Jon shares tender goodbyes with Sansa, Arya and Bran. Sansa says she's going to carry on Ned and Catelyn's legacy in the North. Arya is going to sail west of Westeros, a callout to a big convo she had with the actress Lady Crane back in season six ("No one knows [what's there]. That's where all the maps stop."). Jon makes sure she has her needle with her, and now we've come full circle, ladies and gentlemen.

Jon kneels to King Bran the Broken, and says he was sorry he wasn't there when he needed him. Bran tells Jon he was exactly where he was supposed to be. Trueeeeee. 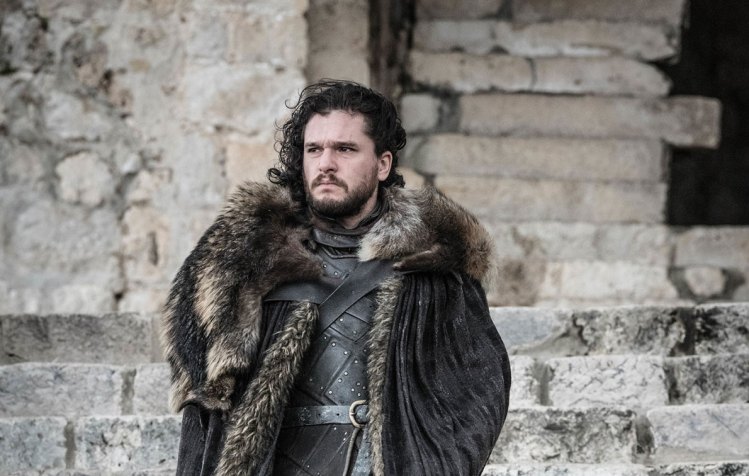 Back in the castle, Brienne is seen flipping through a history book, and lands on Jaime's page, which is wildly incomplete. She starts to fill in the rest, and we're positive the internet is going to have a field day with this one. "Died protecting his queen," she finishes, teary eyed.

Tyrion takes a seat in his dad's old Hand of the King chair, as his new and very scrappy council (Bronn, Davos and Sam) enter. Sam lays down a book that encompasses the history of Westeros of everything after King Robert's rebellion, called "A Song of Ice and Fire." Nice.

Bronn's got a lot of fancy new titles and is new Master of Coin and making sure the brothels get rebuilt first (Lord help us all). Good ol' banter ensues. Back at the Wall, Jon arrives with his Night's Watch guards.

Fast-forward a few...weeks ? Months? Years? We see Arya on a ship sailing west, Jon as Lord Commander of the Night's Watch, Sansa as Lady of Winterfell and Wardeness of the North QUEEN of the North, and Ghost has finally come home...and gets the head pats he's so long deserved! (OK, we're good now, Game of Thrones.)

Jon ventures north above the wall with a group of wildlings, and a sprout of grass can be seen breaking through the snow. Winter is leaving, and so is Jon. Our watch has ended, but his is just beginning.

The ‘Game of Thrones’ Series Finale Photos Are Here, and a New Reign of Terror Has Begun