Camilla Parker Bowles is giving us a small glimpse into her Scottish home—and a look at the family photos she keeps on display.

Over the weekend, Clarence House released a slideshow of images of the duchess taking part in a phone call with her patronage, Silver Line, a charity that offers a 24-hour helpline for older people if they are lonely or in need of assistance.

And while our eyes were first drawn to the 72-year-old’s adorable pup, Beth (oh, and the massive engagement ring on her finger), we couldn’t help but notice a few of the picture frames showcased behind her, in what seems to be a living or family room (scroll to the third slide).

One photo shows a young (and not to mention, handsome) Prince Charles, while another features a pic of Camilla's late brother, Mark Shand. However, firmly tucked in the frame above her white shoulder is a smaller snap showing Camilla surrounded by the five grandchildren from her previous marriage with Andrew Parker Bowles (we’re not ashamed to have zoomed in that far). Camilla married Andrew in 1973, and they had two children, Tom Parker Bowles and Laura Lopes.

In the image, Laura’s three children (Eliza, Gus and Louis) and Tom’s two kids (Lola and Freddy) are all spotted having a fun day in the sun along with the duchess and a large dog. 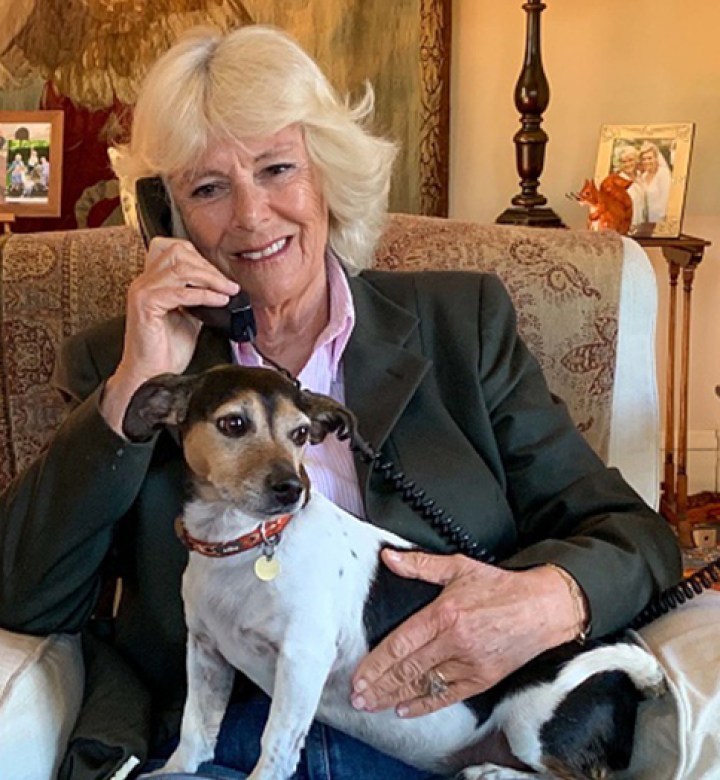 Camilla also recently gave followers a look into the office of the country home in another shot shared by Clarence House. In that post, there were no fewer than three portraits of dogs, several black-and-white photos from her childhood, some of her grandchildren (again) and what appeared to be one from her wedding day to Prince Charles.

Looks like Camilla is all about the group family photos. And we’re totally here for it.