You know them as the most adventurous couple in Bachelor Nation, and now Dean Unglert and Caelynn Miller-Keyes’s relationship status is finally clear: They’re neither engaged nor married—instead, they’re in a “domestic partnership.”

On last night’s episode of The Bachelor: The Greatest Seasons—Ever!, the Bachelor Nation couple addressed recent marriage rumors that surfaced after they were spotted wearing rings on that finger. Unglert debunked the gossip, revealing they’re committed to each other sans paperwork.

“In my opinion, I don’t need the title of husband to show the world that I’m committed to one person,” he explained. “The fact that I’m wearing the ring is showing that I’m committed to Caelynn and only Caelynn, and I’ve been wearing it for the past six or so months. She wears her fun little ring as well, which isn’t the traditional ring of marriage or engagement ring, but it’s our way of telling the world and the people we’re around that we are committed to each other.”

The marriage rumors originated earlier this year, when Miller-Keyes hinted on Instagram that Unglert had already proposed. It started when the 24-year-old Bachelor in Paradise star shared a slideshow of photos of herself and Unglert posing on top of a rock in Yosemite National Park.

She captioned the snap, “Not even a broken femur can stop this guy from exploring.” (FYI: Unglert, 28, broke his femur during a ski accident in December.)

She wasn’t wearing a ring and there’s nothing in the photos that would lead fans to speculate that they’re engaged. The relationship update actually came straight from Miller-Keyes in the comment section.

When her follower @heather_xo88 commented “he needs to propose,” the former BiP contestant replied, “He already did.” Wait, what?! 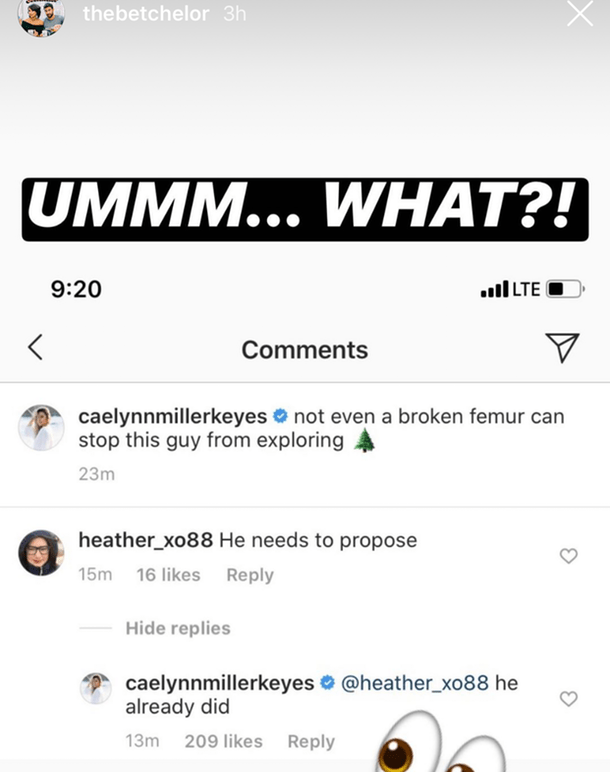 Why would Miller-Keyes casually drop this major milestone announcement in her comments section and not, say, with a caption and photo? That’s definitely not clear, but Unglert did kinda sorta confirm that he’s committed to Miller-Keyes during a promo for The Lovebirds movie with Kumail Nanjiani, Issa Rae and Bachelor Nation alums Ashley Iaconetti and Jared Haibon.

As you’ll notice in Nanjiani’s post above, Haibon gets things going by casually referring to Unglert as married. The rest of the group responds accordingly and asks him if he’s really tied down. Unglert plays coy for a bit but Haibon fills in the blanks, saying that he and Miller-Keyes wed in Switzerland after she flew there to take care of him and his broken leg. Unglert doesn’t exactly say, “Yes, we’re married,” but he does quip, “I don’t know why being married to my wife is a controversial thing.”

Marriage or no marriage, we don’t blame Unglert for calling Miller-Keyes his wife. Still, one question remains: Did Unglert enlist Neil Lane for the commitment rings?