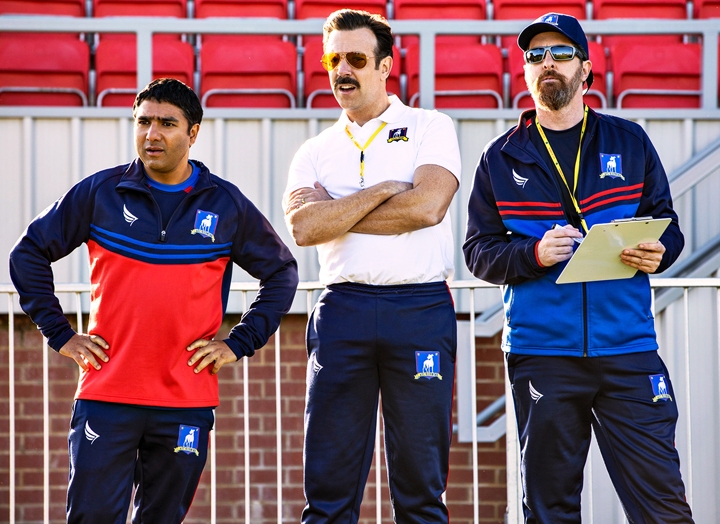 My interest in Apple TV+ first piqued over The Morning Show. It bubbled up even more when I caught wind of shows like Little America and Dickinson. But it wasn’t solidified until a recent Friday night in quarantine when my husband was desperate to find a non-depressing 30-minute show we could both enjoy together. Enter Ted Lasso into my life.

A quick synopsis of the show to get you up to speed: Jason Sudeikis stars as Ted, an overly-enthusiastic American college football coach who—fresh off a Division II championship win at Wichita State in Kansas—gets plucked to lead AFC Richmond, a mostly mediocre Premier League soccer team in the U.K. Ted is earnest. And folksy. And absurd. He’s also the least likely candidate for the job. (No spoilers here, but let’s just say the team’s owner—played by Sex Education alum Hannah Waddingham—is in the middle of a bitter divorce and may have devious reasons for putting Ted in charge. Dun dun dun.)

So, why do I love this should-be-just-another-formulaic-sports-comedy that, btw, has already been renewed for season two? There are three major reasons:

1. Jason Sudeikis is a total delight. For background, this isn’t the first time Sudeikis has stepped into the shoes of Coach Lasso. He first played him in a series of promotional videos for NBC Sports back in 2013, during his Saturday Night Live days. (#TBT) But unlike the OG Ted, who was defined by his proud ignorance and general idiocy, 2020’s version of Ted is eager to learn. To be better. To grow. He also delivers one-liner after one-liner that are so cleverly hilarious, you’ll actually want to rewind back 10 seconds just so you can hear them twice.

2. It’s an ensemble comedy at its finest. There’s the young hotshot player, Jamie Tartt (Phil Dunster), who just won’t get along and his model/D-list celebrity girlfriend, Keeley (Juno Temple), who proves herself to be the real MVP. There’s Ted’s coaching companion, Coach Beard (Brendan Hunt), who also happens to be the ace in his back pocket when it comes to who actually knows the rules of this uniquely British game. Finally, there’s Rebecca (played by Waddingham), owner of the team thanks to her divorce, but a woman whose duplicity is only matched by her character’s rich and relatable motives. (It took just two episodes for her to become my favorite of the bunch—a character with so much nuance...and a performance at a karaoke bar in episode 7 that revives a Frozen favorite as a woman in a power suit’s release.) Bottom line: The casting for this series is what makes it, well, sing.

3. The feel-good “teamwork makes the dreamwork” plot is the escapism we all need right now. Pandemic aside, the country feels pretty damn divided right now. I’m not at all saying a silly sports comedy is the answer, but there is something nice about watching opposing viewpoints coming together. The show has Friday Night Lights vibes for me—with a more comedic flair, of course—and I’m here for it, especially right now.

All this is to say: Apple TV+, you’ve hooked me. I’m now all-in on the $5-a-month streaming fee and will hold onto it long after Ted Lasso’s season finale airs on October 2. (Yep, you’ve got 10 episodes to catch up on—lucky you.)

50 Binge-Worthy TV Shows & Where to Watch Them