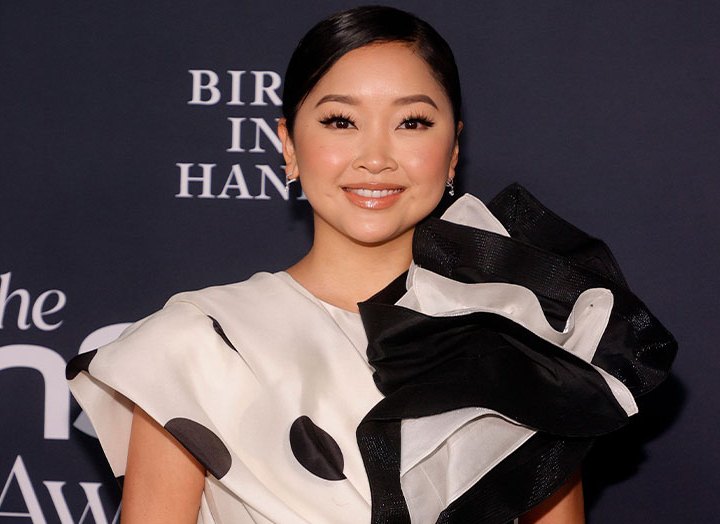 Lana Condor may have parted ways with Lara Jean, but she isn't done with Netflix just yet.

PureWow had the pleasure of speaking with the star of To All the Boys I've Loved Before, who's currently working with PINK on their holiday “Unwrapped” campaign to help young adults prioritize self-care and mental health this season. Aside from dishing on her new rom-com with Cole Sprouse, the actress also discussed two of her upcoming shows and got candid about the importance of putting yourself first.

While chatting about her Netflix comedy, Boo, Bitch, Condor, who's set to star in and executive produce the show, said, "It's a raunchy comedy. It is hilarious, it is filled with chaos in the best way and [it has] drama, but really, it's about how we can lose ourselves in the pursuit of trying to fit in. And that's just a part of life. There's a paranormal aspect to the show, but it is about staying true to yourself, how you can make mistakes in your life, but that never defines you. You can always come back from them."

She added, "I cannot wait for it to come out. The actors that we cast are all phenomenal and incredible. I think people are gonna really love it. I hope they do."

The series will follow high school senior Erika (Condor), who wakes up one morning to discover that she's turned into a ghost. And just in case you're wondering, no, Erika is nothing like the lovable and quirky Lara Jean.

Condor explained, "My character in Boo, Bitch, she has to hit rock bottom so she can build back up. She has a pretty horrible arc because she becomes a really bad person while trying to fit in." Still, the actress revealed that Lara Jean's character hits a bit closer to home. She continued, "I like to believe that I'm a good person, so I would say I identify more with her."

The 24-year-old star also teased her upcoming Hulu action series, Take Out, which will follow a talented young cook who fights crime.

"I have a deep passion and love for food," Condor said. "So I wanted to make a show that could highlight food, action and love—those are the three things that I love the most in the world. I was lucky enough to partner with some amazing producers and I'm really, really excited for it because it's age appropriate. It's actually my age I'm not playing someone younger, although I do love playing high school [characters]. It's actually a young woman growing up in New York City, so that's exciting to me. We're getting that one off the ground right now and I can't wait to start shooting it."

While discussing her partnership with PINK, the X-Men: Apocalypse actress got candid about navigating issues that affect mental health. She said, "It's very easy to not put yourself as a priority first. But during the more challenging times, that's when you really have to be strict with your self care and your mental health."

Condor continued, "Pamper yourself so your body knows that it deserves to be loved and be taken care of and spoiled. That always helps. Also, reach out to your support system, lean on your friends and your family when you're going through a challenging time and be open with them. Don't be afraid to ask [for support]."

One thing's for sure: We'll be practicing self care with brand-new episodes of Boo, Bitch as soon as it hits Netflix.

LANA CONDOR SHARES THE NO. 1 SELF-CARE RITUAL SHE PRACTICES DAILY DURING QUARANTINE